Mars may have had a giant ring billions of years ago, new research suggests 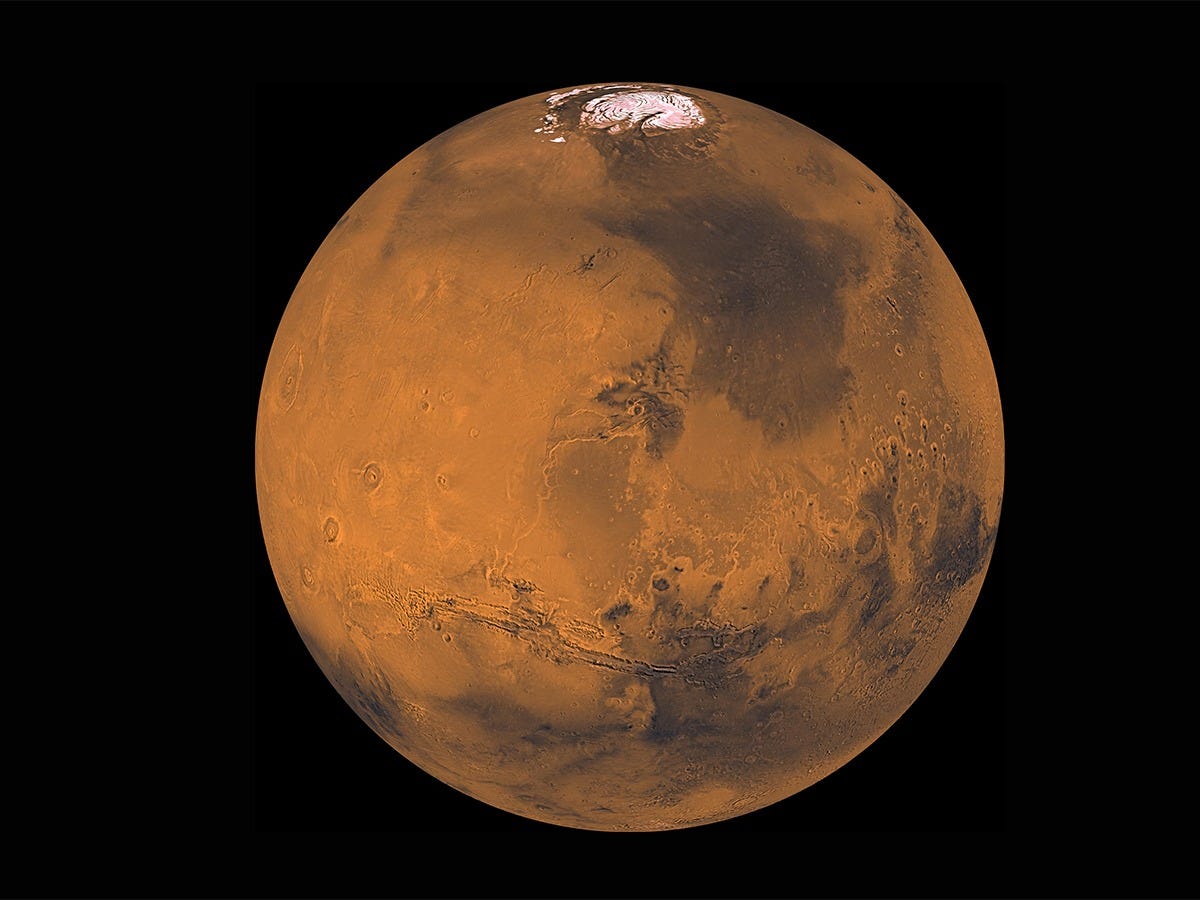 New research on Mars’ two small, irregularly shaped moons suggests the red planet might have had a giant ring in the past.

Mars’ two moons, Phobos and Deimos, both have wonky orbits. Phobos is about seven times larger than Deimos, and circles only about 3,700 miles above the Martian surface – the closest moon to its planet in the solar system. Deimos’s orbit, meanwhile, is tilted by about two degrees.

At this week’s virtual meeting of the American Astronomical Society, scientists from the SETI Institute and Purdue University suggested in a presentation that Deimos’ orbit may be slightly off due to the gravitational pull of an old Martian moon that no longer exists.

That supports other research that suggests Mars experiences a cycle of ring-moon formation: Its moons are drawn towards the planet, eventually breaking up into pieces that form a giant ring. Then over time, the rocks and debris coalesce to form a new moon. 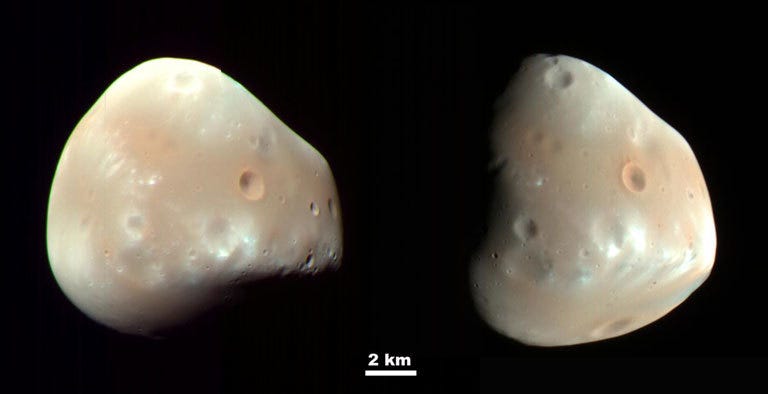 NASA/JPL-Caltech/University of ArizonaColour-enhanced views of Deimos, the smaller of the two moons of Mars, from imaging on February 21, 2009, by NASA’s Mars Reconnaissance Orbiter.

The mysterious history of Mars’ moons

The unique characteristics of Mars’ moons have long confused astronomers.

“The fact that Deimos’s orbit is not exactly in plane with Mars’s equator was considered unimportant, and nobody cared to try to explain it,” Matija Ćuk, a research scientist at the SETI Institute, said in a press release about the research.

Many scientists previously thought both moons were captured asteroids or space rocks. But Cuk’s team’s research suggests that Deimos’s orbital tilt – paired with the fact that it’s farther away than Phobos – has bigger implications.

“Once we had a big new idea and we looked at it with new eyes, Deimos’s orbital tilt revealed its big secret,” Ćuk said.

The researchers calculated that the ancient moon responsible for the orbital tilt may have been about 20 times as big as Phobos and existed around 3 billion years ago. Then it was pulled toward Mars and ripped apart to form a ring.

A cycle of moons and rings

The new findings support research from 2017 that suggests that Mars experiences a cycle of moon-ring formation.

The 2017 research theorised that over billions of years, there have been multiple generations of Mars’ moons and rings.

Phobos, by this logic, is the most recent incarnation of that cycle. Some researchers think Phobos is as young as 200 million years old – meaning it formed around the same time dinosaurs were roaming the Earth. 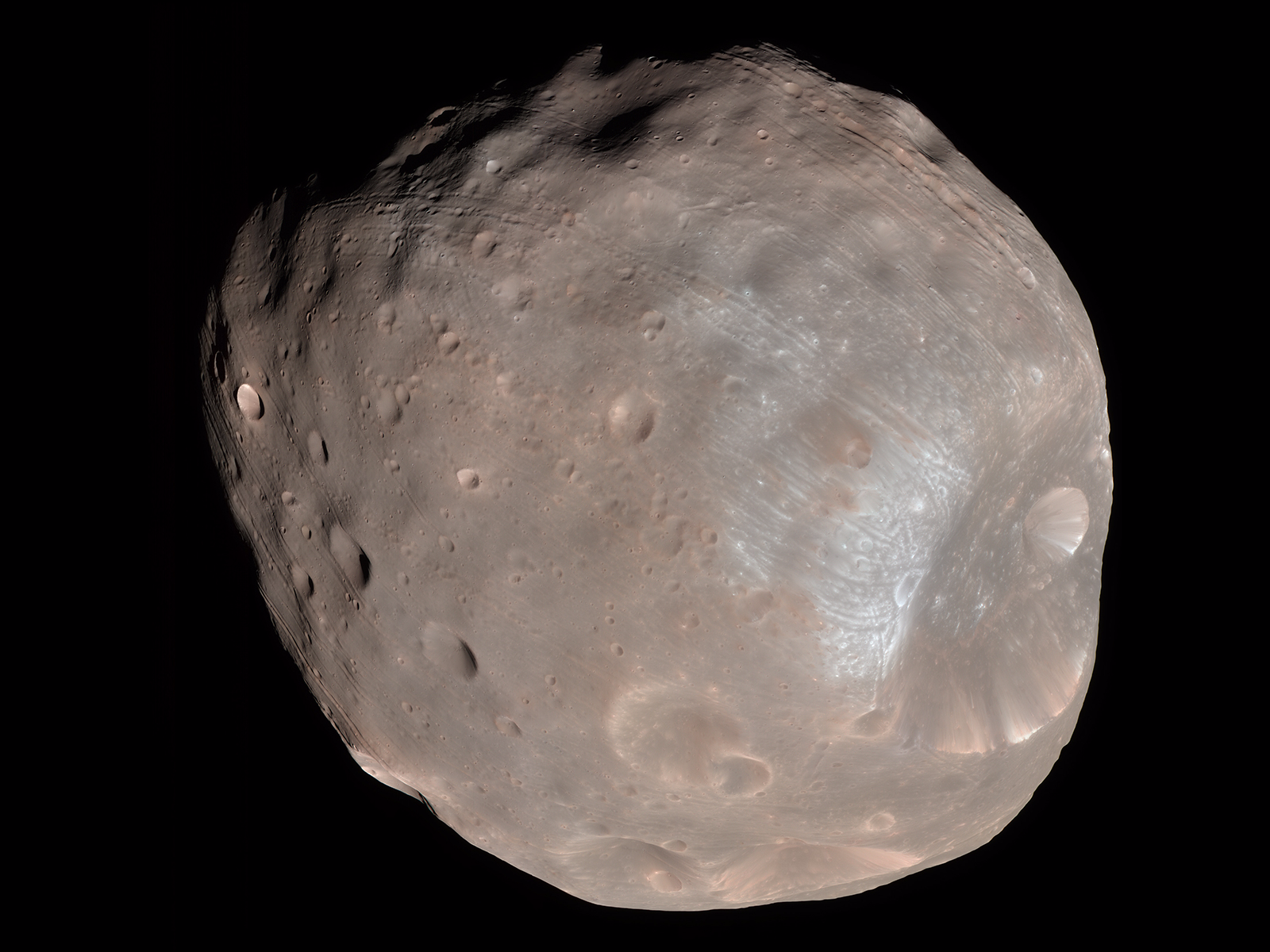 NASA/JPL-Caltech/University of ArizonaPhobos, a moon of Mars, as seen by NASA’s Mars Reconnaissance Orbiter.

But the moon is getting closer to the Martian surface as it’s pulled in by gravitational force. Once it gets too close, Mars’s gravity will likely pull it apart, perhaps within 50 million years. The pieces would then orbit as a ring.

The Japanese space agency, JAXA, is planning a mission in 2024 to learn more about Martian moons. If that goes according to plan, a spacecraft would land on Phobos’ surface to collect and analyse samples that could reveal more about its composition and history.