As of today, Aug. 5, 2013, the Curiosity Mars rover has spent an whole year on the Red planet.

She’s supposed to be there for two years total, investigating if ancient Mars was once habitable — a feat she actually already accomplished a few months ago.

As she touched down on Mars Aug. 5, 2012, after seven unmanned minutes spent in terror, waiting for the culmination of decades of work, a scream of excitement shook the Curiosity rover’s control room.

“Touchdown confirmed, we are safe on Mars,” engineer Allen Chen said over the radio, eliciting tears of joy and congratulatory hugs between all the blue-shirted Jet Propulsion Laboratory staff.

Curiosity is on Mars to investigate several things, including studying the climate and geology, searching for signs of life and water, and determining if the planet could ever be made habitable for humans. She was made to last for a two-year mission — and is already half way though it.

One of the most nail-biting events was the Rover's entry, descent and landing on the Red Planet -- which luckily went off perfectly. See the video below to relive it or experience it for the first time. 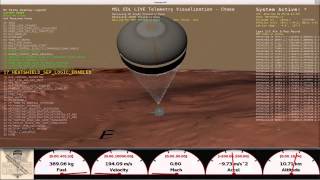 Relive The Excitement And Exhilaration Of Curiosity's Landing With This Video

This image taken during the descent by the Mars Reconnaissance Orbiter captured the rover while she was falling to the surface. You can see the parachute slowing her descent in this stunning image. The rover's own cameras caught the landing from her point of view. The video starts with the heat shield (which protected Curiosity while she was falling through the atmosphere) detaching, and ends with the sky crane blowing up dust and the rover touching down on Mars. 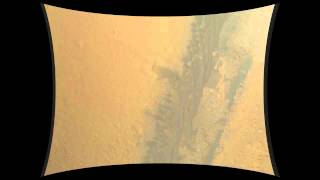 The rover made it to the surface of the planet in once piece -- but were all her instruments intact? After spending a full 17 days checking out her instruments the only damage was a slightly broken wind sensor. The most exciting party? When she sent back her first image, seen below. The image is tiny because it's just a thumbnail -- a larger size was sent back later.

The Very First Pictures From Curiosity On Mars

From then the images just got better and better. Here's a self-portrait she took in early September. After taking breathtaking images of her new home, Curiosity tested out her new wheels and took her first drive. The first rock that she used her Chemcam instrument on was called N165, later renamed 'coronation,' which was located near the rover's landing site. The laser shot 30 pulses over 10 seconds, heating the rock to the point where its molecules became a burning ball of plasma. The rover can analyse the light this fireball puts off to determine what the rocks are made of.

Since then she's been driving and driving -- she's driven a total of more than a mile on the Martian surface. While driving there, the rover spotted several instances of rounded pebble-looking rocks in a concrete-like conglomerate rock. These rocks indicate that Curiosity's been meandering around an area of Mars that amazingly used to be inundated with flowing water. Mars Was Once Covered In Hip-Deep Flowing Water

Curiosity also got her contact science on along the way, using her APXS instrument to investigate the rock 'Jake Matijevic.' The findings from Jake, which NASA announced Oct. 12, indicated he was unlike any Martian stone ever seen, but similar to a type of well-known type of rock on Earth. Before she reached Glenelg, the rover took a month-long break to play in the sand on a dune the team named Rocknest. She used the sand to clean out her scoop and her CheMin instrument, and analyse a sample. The findings from Rocknest showed that Martian soils look a lot like Hawaiian sands. It includes the presence of miniature crystals of feldspar, pyroxenes and olivine mixed with other, non-crystalline material. Soil analysis also indicates that there are simple carbon compounds in the sand at Rocknest, but the researchers can't say if this comes from biological origins or not. The radiation detector has also been working hard since the rover landed -- taking measurements night and day for three months. They've found that based on radiation levels, an astronaut could fly to Mars, stay for about 300 days, and fly back before reaching their maximum allowable radiation levels. Astronauts Could Survive Radiation On Mars, But There's A Bigger Threat

Studies of the Martian atmosphere show how the planet's atmosphere (and its water content) has changed over time -- most of it was lost about four billion years ago. Before these changes, the planet would have been favourable to cultivate microbial life. What The Air On Mars Was Like Four Billion Years Ago

The rover's first long-term stop was at the weird and interesting-looking place called Glenelg, where several types of rock seem to intersect. The rover's biggest feat came when she drilled 2.5 inches into a martian rock in early February. The samples showed in March that the area, called Yellowknife Bay, was habitable billions of years ago. Yes, Mars Could Have Once Supported Life! >

The rover has also found key chemical ingredients for life in the rocks she has sampled. She's found they key chemicals for life: carbon, hydrogen, oxygen, phosphorous and sulfur and even identified clay mineral deposits formed by water. In June, the rover started on her long journey to the foothills of Mount Sharp. The mountain holds stratified layers of rock that will give insights into how the planet has changed over time as the rover drives 2,625 feet up the slightly sloping rock face. Here's a time-lapse video of the year that the rover's been on Mars -- from its point of view. NASA is working on designing a second Mars rover to send to the Red planet in 2020. The new rover will be put together using similar equipment to, and spare parts from, Curiosity, but will have different scientific instruments. NASA Will Send A Second Curiosity Rover To Mars In 2020

NASA's next big mission is to start catching, studying, and mining asteroids.