What you need to know on the markets this week: Bitcoin and beyond; 'Hey big spenders' — what the funds did with their cash; a platinum opportunity? 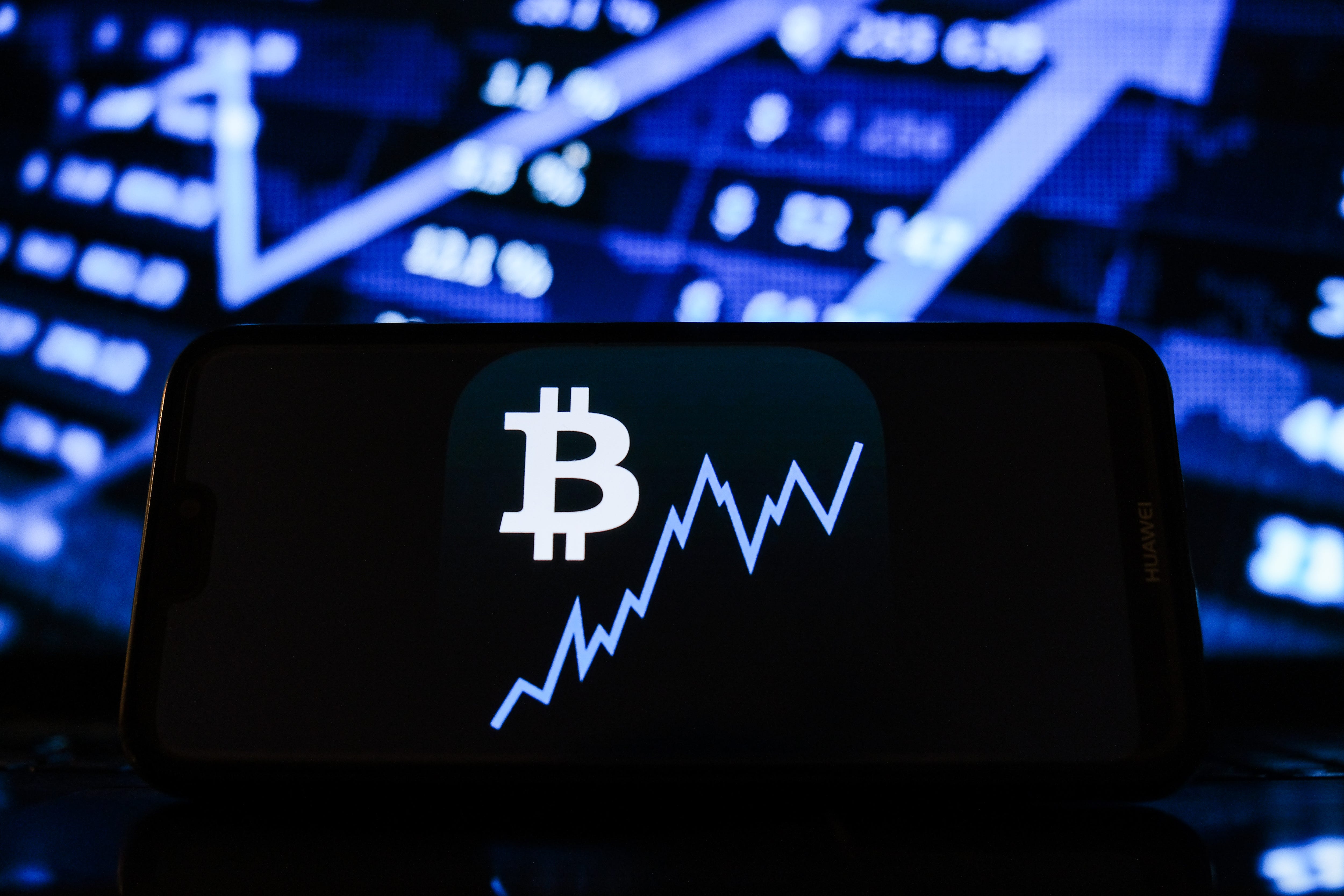 Last week saw some game-changing events for the cryptocurrency market, which pushed the prices of bitcoin, ether and others to record highs. Meanwhile, on the commodities front, a broad sweep higher in raw materials prices has got market-watchers pondering if we are on the verge of a new super-cycle. This coming week may reveal if big investors are buying into crypto, as well as the resilience of star precious metal, platinum.

Bitcoin to the moon… and beyond

Bitcoin hit a record of nearly $US50,000 last week and this time around, it wasn’t a motley crew of amateur traders organising an effort to squeeze the price higher. Elon Musk, a long-time advocate of cryptocurrencies and of bitcoin, in particular, had already ignited a frenzy in “meme crypto” Dogecoin.

But it was Tesla â€” the electric vehicle maker he founded and runs â€” unveiling a $US1.5-billion purchase of bitcoin that fuelled this latest leg higher. Tesla said it would also consider allowing customers to pay using the digital token, possibly opening the floodgates to other large companies to do the same.

Online payment groups like PayPal and Square already allow users to buy and sell with crypto. Last week, Mastercard joined their ranks and said it would allow the use of some cryptocurrencies on its network.

RBC suggested Apple could be the next big corporation to adopt bitcoin, and the CFO of Twitter told CNBC on Wednesday that it too could buy the token. But bitcoin isn’t ready to go mainstream, according to the world’s biggest asset manager,UBS. And Treasury Secretary Janet Yellen has, again, voiced reservations about cryptocurrencies in general, saying their use in online crime and for money laundering is growing.

BlackRock, the world’s biggest fund manager, last month said it would allow two of its funds to invest in bitcoin futures. So who’s next?

This week could bring the answer to that question, when Wall Street’s big guns report how they invested their money in the final three months of 2020.

Tesla just invested $US1.5 billion in bitcoin. Here are the bull and bear cases for the crypto, according to legendary macro trader Mike Novogratz and Goldman’s wealth-management CIO.

“Hey big spender” â€” how the funds spent their funds

This coming week, the biggest US investors will release details of what they put money into â€”and sold off â€” in the fourth quarter of 2020. The so-called 13-F filings with the Securities and Exchange Commission offer a breakdown of the holdings at the end of December of any fund with more than $US100 million under management.

However, in the wake of the GameStop short-squeeze in January, anyone hoping to get a look at what stocks the funds are betting against will be disappointed. A 13-F filing contains long positions only, along with a fund’s options holdings, convertible notes and American Depository Receipts (ADRs) – or holdings of US-listed stock of foreign companies. But no short positions.

Even so, most investors – professional and amateur – scour the 13-Fs to see what the “smart money” did last quarter. Warren Buffett, “Big Short” investor Michael Burry – who must be one of the lone Tesla shorts standing -, Ray Dalio, David Einhorn, Seth Klarman and Ryan Cohen will all release details of what they bought and sold.

It could take just 2 catalysts for pockets of speculation to snowball into a widespread bubble, one global strategist says. He recommends 3 ways to capitalise on this frothy environment.

The price of platinum rocketed by 15% to above $US1,200 an ounce its highest in over six years last week, driven by a heady cocktail of a weaker dollar and a broad investor push into commodities and making it the best-performing raw material of the past week. It scorched past crude oil, copper and lumber and is on track to top the charts for the month of February.

Until around last March, in the depths of the coronavirus crisis, platinum had been on a long, painful downtrend. Aside from its use in jewellery, platinum’s main industrial use was in the catalytic converters of diesel-powered vehicles. The diesel-emissions scandal, which led to a drastic drop in sales of diesel vehicles and several punitive measures aimed to reduce the number of them on the roads, has eaten into platinum demand â€” so much so that for the past six years it has been worth less than gold, despite being far more scarce.

As the world transitions to using cleaner sources of energy and cutting emissions, several commodities are emerging as being central to this effort, platinum being one of them.

Platinum, together with iridium, is used as a catalyst in proton exchange membrane electrolysis â€” used to extract hydrogen from water as a source of zero-emissions sustainable fuel.

Johnson Matthey, the world’s largest refiner of platinum group metals, said in a report on February 10 the global platinum market ran a deficit for the second year in a row in 2020. It looks likely to see a shortfall again this year.

“The move towards an expected supply deficit is occurring at a time of increased focus on tightening emission regulation in regular combustion engines while accelerating green hydrogen production has increased demand for platinum-based electrolyser capacity,” Saxo Bank head of commodity strategy Ole Hansen said in a note last week.

“Having been in a downtrend for nearly a decade, platinum’s breakout last November helped attract renewed investment demand, not least after gold hit $US2000/oz and its premium to platinum rose above $US1000/oz. These developments helped attract increased switching activity between the two metals,” Hansen said.

Last week, cannabis stocks went parabolic, driven by double-digit percentage rallies in the likes of Aphria, Tilray and Sundial Growers. Joe Biden’s victory in the presidential election and Democrat promises to decriminalize cannabis have given a number of investors, including the Reddit traders, reason to pile in. Cannabis was the top-performing investment theme last week, according to broker CMC Markets’ Global Thematic ETF screening too, with a gain of nearly 40%, compared to runner-up uranium, with a 11% increase. 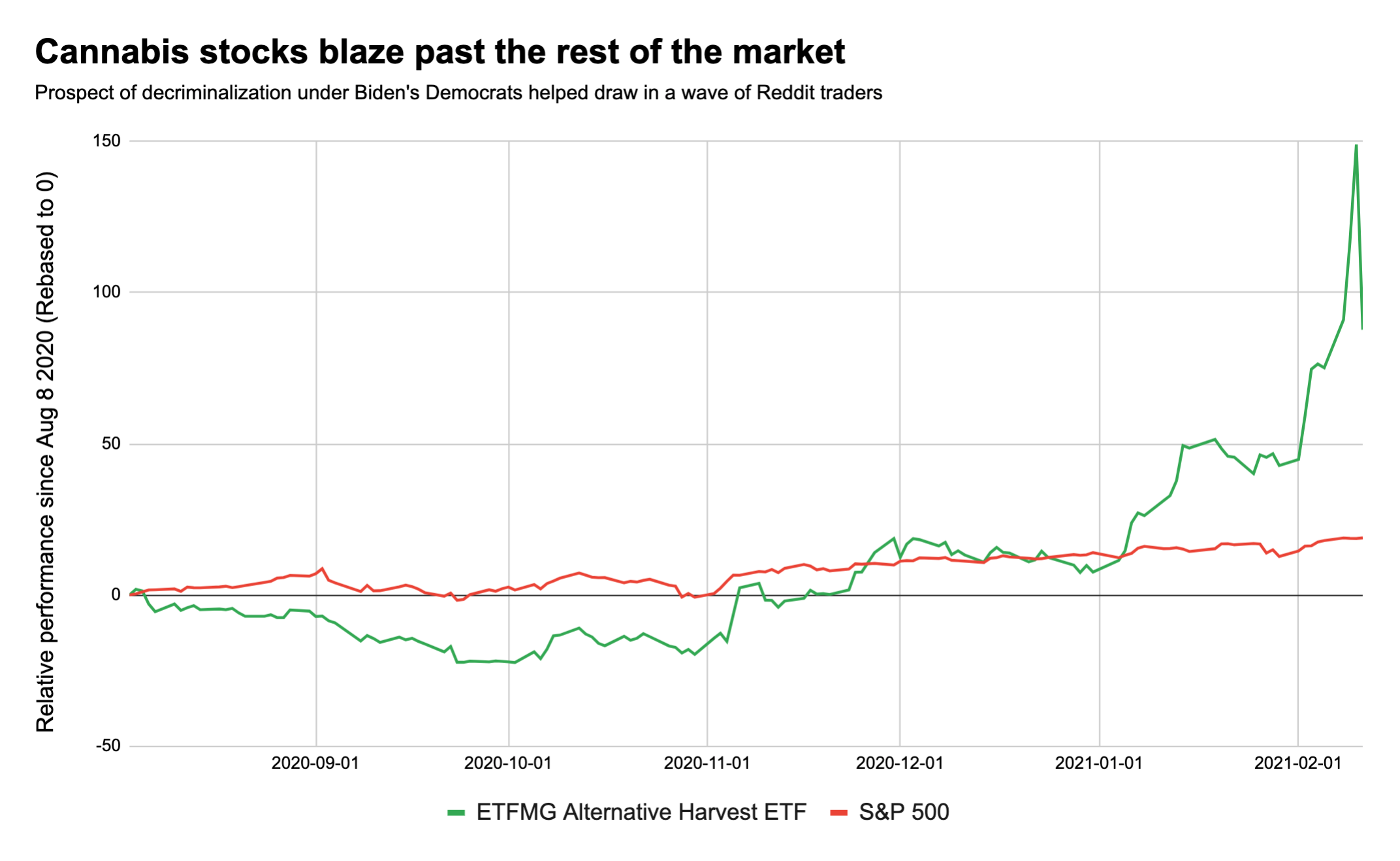 Bloomberg/InsiderRelative performance of the ETFMG Alternative Harvest ETF vs S&P 500.

Economic calendar for the w/c Feb 15

Earnings calendar for the w/c Feb 15