Markets are pricing in a Biden victory and Democratic Senate to fuel massive stimulus in 2021, JPMorgan says 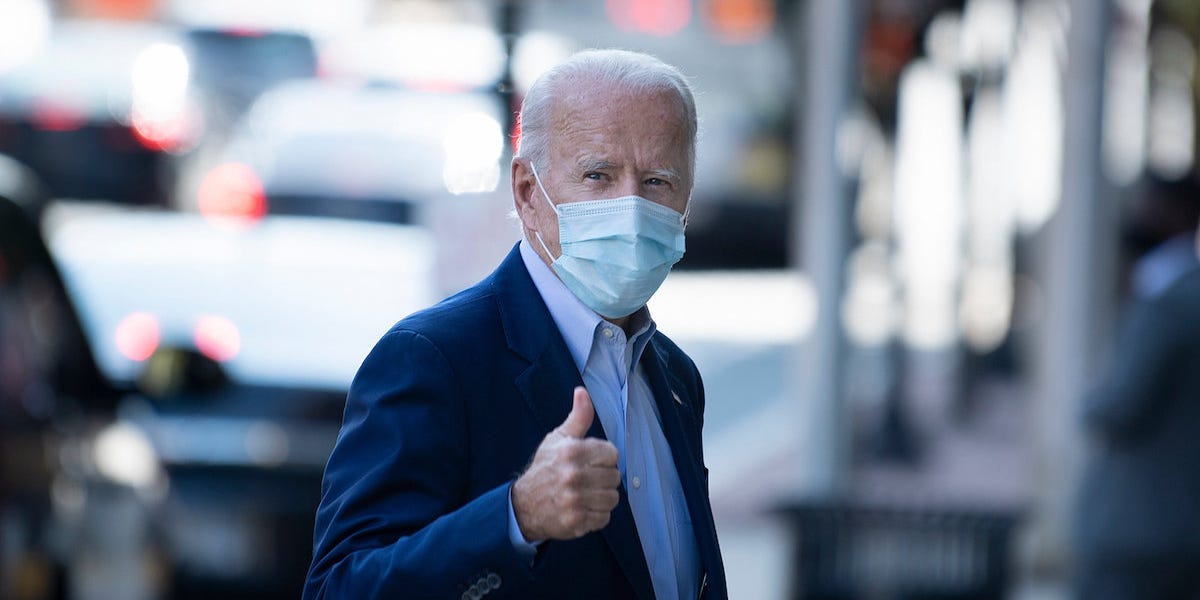 Markets are increasingly pricing in a Biden victory and fresh stimulus, leaving room for a sudden slump should election results miss expectations.

JPMorgan held a call with investors on Wednesday to gauge sentiments ahead of Election Day. According to polls, speakers and market participants see a so-called blue wave solidifying with little time left for President Donald Trump to shift momentum in his favour. Democratic presidential nominee Joe Biden has enjoyed a consistent lead in what’s shaping up to be “the most stable election in modern history,” the bank said, leaving investors to already position for a Democratic sweep.

All eyes are now on Senate races as stimulus hinges on Congress’ makeup. Markets expect front-loaded stimulus as the Biden administration works to pull the US economy out of its virus-induced downturn. The projection marks a stark shift from past months, when investors viewed a split Congress as the best outcome.

“There could be some disappointment” if Republicans maintain a Senate majority and hold up a massive relief package, JPMorgan said.


Read more:
These are the 10 most crowded trades among global money managers, UBS says. The biggest underweight stocks might surprise you

Markets have also grown less concerned about a contested election, the bank added. More than 26 million votes have been cast as of October 17, representing nearly a fifth of all votes cast in the previous presidential election. With 21 states able to start counting ballots early, voting results can arrive on or soon after Election Day and allay fears of a significantly delayed outcome.

Economists and lawmakers have repeatedly called for fresh stimulus to be approved ahead of the election, but chances of such a deal are fading fast. House Speaker Nancy Pelosi imposed a 48-hour deadline on negotiations with the White House on Sunday, fast-tracking the talks after three months of sluggish progress.

Even if the two groups reach a deal, Senate Republicans are united in their opposition to a large bill. Senate Majority Leader Mitch McConnell indicated the body could vote on a $US500 billion proposal as soon as Tuesday. Yet Senate Democrats are poised to block the measure, further diminishing hopes for near-term fiscal support.

Investors still might not get the stimulus boost they’re hoping for should a blue wave materialise. Democrats would either need at least 60 Senate seats or to abolish the filibuster for complete control of Congress. Stimulus approval in a lame-duck session is “unlikely,” conference speakers said.

In all, an orderly transfer of power and Senate election outcomes overshadow the winner of the presidential race, JPMorgan said. A split Congress and Biden administration is now viewed as the worst potential outcome for the S&P 500, as it would likely yield the same stimulus stalemate seen today. Investors should pay attention to Senate races in swing states and chatter around a potential Biden cabinet, as both will play critical roles in economic policy moving forward, the bank added.


‘Not out of the woods’: Here’s what 5 top executives said this week about the prospect of more economic stimulus


Cathie Wood runs 5 funds that more than doubled broader market returns in the 3rd quarter. She and her team break down 8 winning stocks turbocharging the outperformance of its top ETFs.