Whatever crack the stock market is on we do know the answer to all questions is WINNING. 6 of the past 7 weeks have been in the red but – WINNING – somehow is the attitude as we dress the windows into the end of the quarter so that GS et al can pass around the pipe and lure in a whole new round of suckers to play the game in the second half.

How many times can the market rally on the same news – news that we know is nothing but BS number shuffling out of Europe that pushes the Greek crisis back for a year or two and nothing more? Well it’s been about 5 times so far as the average US “investor” has about the same attention span as the average crack addict – although the investors need to get their fixes more often…

I pooped the party this morning and sent out an Email Alert to Members saying it was time (7:10) to take the money and run in the futures. At the time we were up about 0.6% pre-market and Greece hasn’t even had their vote yet so it just wasn’t worth risking the ill-gotten gains – JUST IN CASE the “sure thing” backfires. Now it seems like the vote won’t happen until 9 or 10 so we’ll have plenty of time to place our bets once the news breaks – no sense in playing the rumours until then – especially as those bullish positions could be quickly whipsawed on a NO vote.

We hedged our bullish WINNERS into yesterday’s close with DIA June 30th $121 puts at .50 and the SQQQ July $25/26 bull call spread at .50, which was offset by various bullish short puts plays on some stocks we like that should mitigate the cost of the bearish spread if the market keeps WINNING.  As I said in this morning’s Alert:

That’s right, despite Greece being “fixed” (assuming the vote goes through) I maintain that we are only on course for the move I predicted last week – that we would hold the bottom of our range, run back over our “Must Hold” levels and then fall off a cliff after the July 4th weekend. So far, following our chart for the past 2 months has been a WINNER – so why stop now? Look how perfectly the market obeys the 5% Rule!  Both the Dow and the S&P pulled up just short of their goals yesterday but we’re well over now in pre-markets and the Nasdaq should be over 2,740 as well.  The RUT already broke through and it’s the NYSE that we expect to give us trouble as they are the broadest index and the hardest to manipulate so we can expect some serious resistance at the 8,280 mark and there’s no way they’ll pull a 2% bump pre-market, even with a yes vote.  So we’ll watch out for that today as well as the Dollar on the 75 line.  As I said to Members this morning, I don’t see the Dollar failing there without QE3 being announced or perhaps a $1 Trillion raise in the debt ceiling – something profound to weaken it, not just Greece being “fixed.”   Barry Ritholtz sums up my other concerns very nicely, saying:

Are we making a major turn? Has psychology become so bad its a contrary indicator? Has the 200 day moving average proved to be inviolable?  Perhaps any of those explanations might prove to be the case, although I have my suspicions otherwise. I suspect it is simply a case of funds marking up stocks into the close of the 2nd quarter.

What data supports this thesis? I would point to 2 things: Psychology and Trading Volume. Most metrics are showing psychology is either neutral or optimistic. This tends to be supportive of a short term trading bounce, and not a longer-lasting rally.

Second, the volume has been anemic, even by the unusually low levels we have seen all year. The overall volume on Monday was well below the 30-day average on both NYSE and Nasdaq. Tuesday was even lower. Rallies on increasingly lighter volume are not signs of aggressive institutional buying. Rather, it supports the Window dressing thesis.

Also supporting the markets is the LACK of bad news. Check out the front page of the WSJ – where’s the bad news?  Greece set to vote on Austerity Plan – YAY!  BofA Agrees to Pay $8.5Bn Settlement – YAY!  Dow Looks to Extend Win Streak – YAY!  NATO Copter Ends Kabul Siege – YAY – Afghanistan is fixed too!   Even “Wall Street Wielding the Ax” sounds nice but it’s really about layoffs – perhaps the only negative news story that made the on-line cut this morning.

It’s 8:47 and the Greek Parliament is voting and you would think the CNBC girl is reporting from a war zone.  She has a mask on to stop the tear gas and you can hear screaming and explosions on the street below her as the police throw smoke bombs at the crowd and the crowd throws rocks and molotov cocktails at the police in an exchange of “ideas” in the capitol.

Is this Democracy in action or is this what happens when a Corporate Kleptocracy takes over a Government and denies the people a true voice?  Don’t worry, we’re likely to find out the answer to that one soon enough as America reaches its own end game.

As Charles Smith points out (image by WilliamBanzai17): “This is a classic description of a kleptocracy: a financial and political Elite which skims and concentrates the wealth of the nation via corruption and embezzlement while being protected by the winking complicity of their fellow plunderers who hold civil and financial authority.”  That pretty much sums up our country, doesn’t it?  Unless you slept through the entire Financial Crisis and missed the part where the US Citizens took on an additional $5Tn in debt to pay for the Banksters’ losses (including the Fed’s $2.3Tn giveaway that we’ll be billed for later) then you realise we’re in the same boat and you MUST read this Austerity Package that is being forced on the Greek people today (courtesy of Zero Hedge). 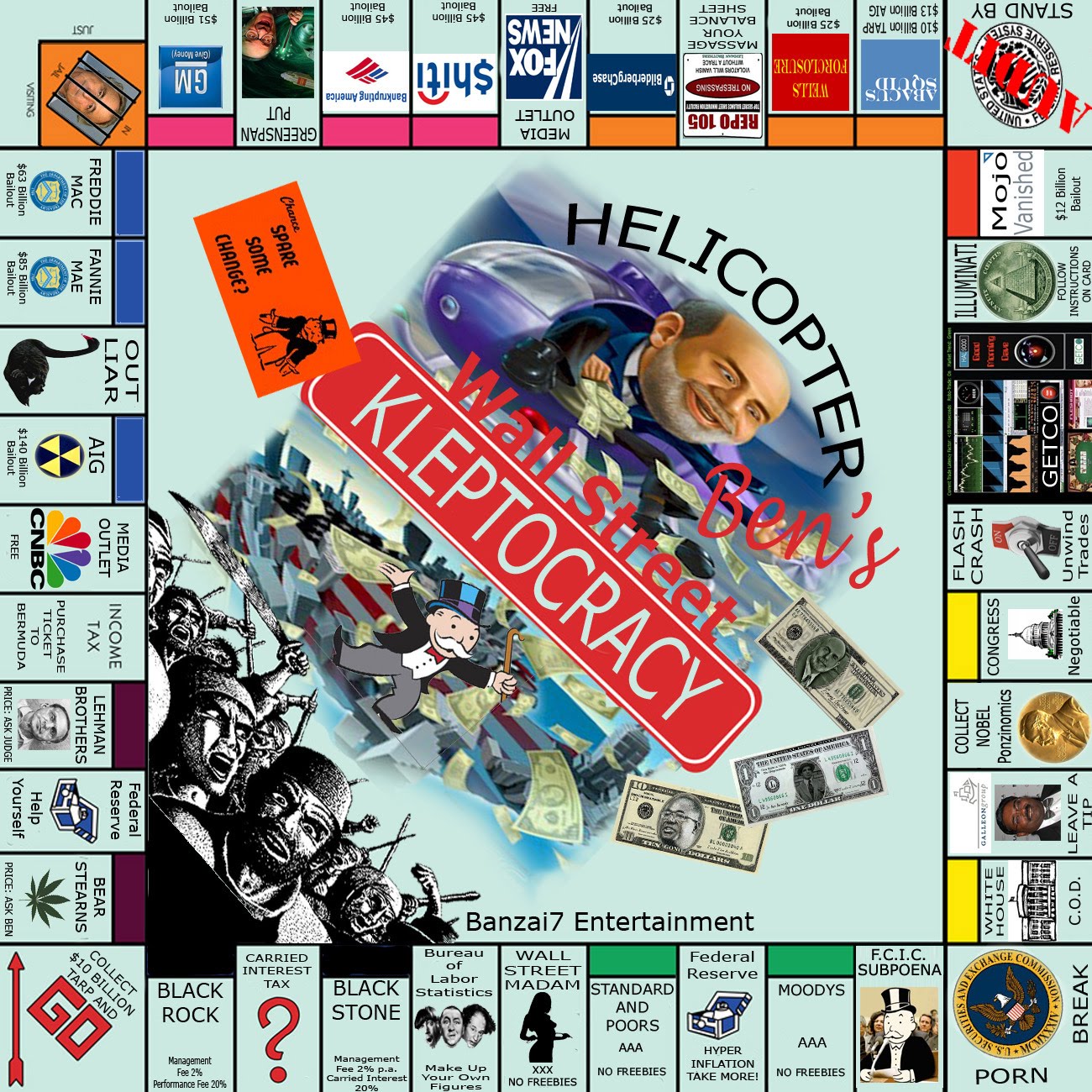 There is NO WAY the Greek Government will be able to enforce this.  If I were your banker, and you were unemployed and up to your eyeballs in debt and 3 months behind on your mortgage and I offered to lend you enough money to cover the past 3 months and the current month as long as you agreed to pay me 10% more 60 days from now because surely you’d have a high-paying job by them – you would take that deal, right?  Taking the deal isn’t the issue – whether or not you are able to live up to our new agreement IS.  That’s all this is – more extending and pretending and the negotiations on the US debt ceiling – as I mentioned on Monday – is more of the same.

9am Update: Austerity WINS!  NOW let’s see if the markets pop on this news.  I’m feeling good about my early call as we’re off from the 7am highs still and we expected this to be a bit of a “sell on the news” event.  Too bad it didn’t happen while the markets were open but we have 30 minutes to go and it should be a very interesting day. The S&P futures (/ES) are right on the 1,300 mark and if they can’t get the Dollar below 75.25 (now 75.27) down they will go so it’s a great line to short OR long off using the Dollar as a key play.

I’m betting short but then I’ll still expect a rescue of our markets into the end of quarter but, after that – well, let’s just say we are expecting to change those “Must Hold” levels to breakout levels and drop the whole chart at least 5% from there.