I never thought I’d see a Goomba bidet in the moat outside of Princess Peach’s castle, but here we are. The insane-looking image above is pulled from the latest Mario game to grace Nintendo’s Switch: “Mario + Rabbids: Kingdom Battle.” The game is fantastic — check out our full review right here — but its standout characteristic is how absurd it is at every possible moment.

Part of that is due to its ridiculous premise, which combines the anarchic world of Raving Rabbids with the already surreal and fantastical world of Super Mario. And another part is sheer will of the game’s developer, French game company Ubisoft. Someone or, more likely, several someones spent a great deal of time crafting this shrine to a Rabbid using the bathroom. I’ve spent over 20 hours with “Mario + Rabbids: Kingdom Battle,” and I’ve seen some truly bizarre things. Allow me to share them with you.

Up front, the very nature of this game is going to produce strange imagery. In the plot setup for the game, several Rabbids are turned into hybrids of themselves and Super Mario characters. They are literally called names like 'Rabbid Mario' and 'Rabbid Peach.' They look ridiculous. How did Rabbids get turned into hybrid Mario characters? By invading a Nintendo superfan's office/living room and dressing up as those characters, then...well, it's complicated. The Rabbids use a time-travelling clothes washing machine to get around. Here they are arriving in the office/living room of the Nintendo superfan. Nintendo/Ubisoft
Yes, that appears to be a Dyson vacuum. And yes, there is Nintendo stuff strewn everywhere.

But since the Rabbids are nihilists, they immediately get to work causing chaos. They're putting on wigs and playing with toys and, in one case, bathing in the toilet. When the Rabbids do finally arrive in the Mushroom Kingdom, all hell is breaking loose. Whatever the Rabbids did is causing Mario to make this face: His sweet brother Luigi, ripped from his arms! But when the going gets tough, Mario is down to work with whoever he needs to -- in this case, it happens to be a rabbit with a five o'clock shadow dressed up as his girlfriend. Nintendo/Ubisoft
Try not to look at Rabbid Luigi directly if you can help yourself.

On Mario's journey to re-take the Mushroom Kingdom from the forces of Dali-esque surreal madness, he discovers that his long-time enemy -- the Goomba -- has been reduced to a punchline over and over and over again. In fact, many of the typical Mario tropes are exploited for comical means in 'Mario + Rabbids: Kingdom Battle.' Like this massive question mark block here: Or this massive POW block, from the original 'Mario Bros.' arcade game. The impact a POW block of that size would have is hard to imagine. It's like the nuclear warhead of the Mushroom Kingdom. That said, it's really the combination of Rabbid with Mario that makes this game particularly bizarre. Moments like this, when Mario meets Rabbid Mario, are especially ridiculous. Here she is taking selfies with a boss just after he was defeated. He's about to fall to his death, but he stopped to take a selfie with Rabbid Peach on the way down. Thumbs up! Beyond the bizarre imagery, the game's also full of (slightly) more adult-centric humour than most other Mario games. But really, the bizarre visuals are primary. In what other game is a massive pair of underwear being dried in the desert sun? The game's launch trailer only provides a brief glimpse of the madness within 'Mario + Rabbids: Kingdom Battle,' but please trust that there is far more madness awaiting therein should you choose to pick up the game. It's out now on the Nintendo Switch, both digitally and in stores, and it costs $60. 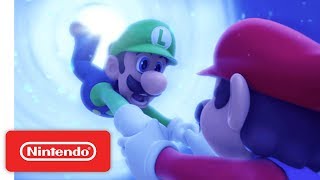