The US economy lost 701,000 jobs in March even before the coronavirus shutdown spurred historic unemployment 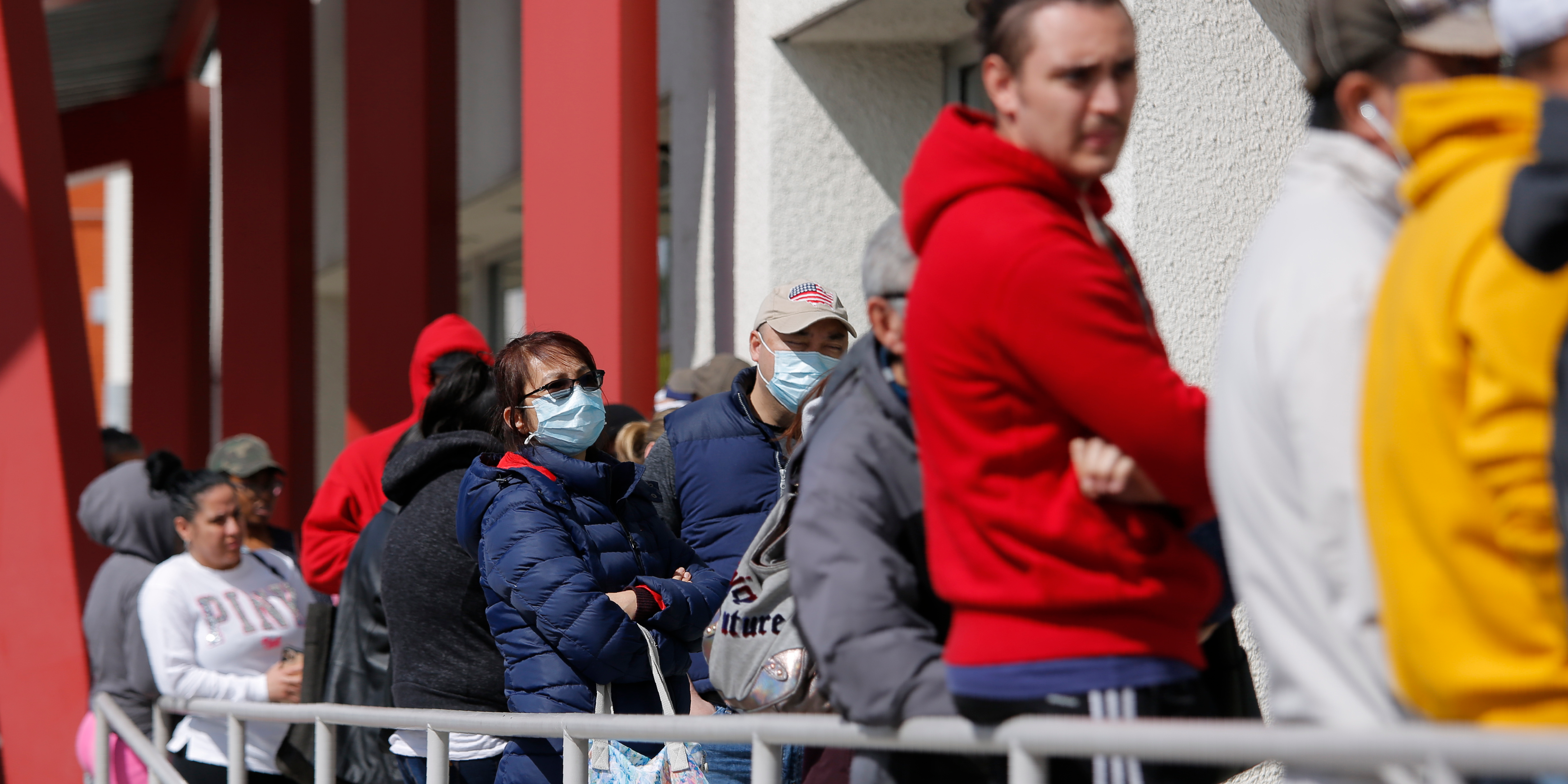 The US labour market in March contracted for the first time since 2010 as the novel coronavirus forced a widespread US economic shutdown.

In its monthly report, the Bureau of Labour Statistics on Friday said the US lost 701,000 nonfarm payroll jobs last month. That marked a sharp decline from the revised number of job gains for February and was far deeper than the 100,000 job losses forecast by economists. It’s also the first time since 2010 in which the report has shown jobs lost – ending a 113-month streak of job creation.

The situation in the US rapidly deteriorated in March as cases of COVID-19 spiked and the virus was officially declared a pandemic. On Thursday, confirmed cases of COVID-19 passed 1 million globally, with more than 50,000 deaths.

“There’s a psychological barrier that crossing or ending the positive job streak will have,” the Glassdoor economist Daniel Zhao told Business Insider. 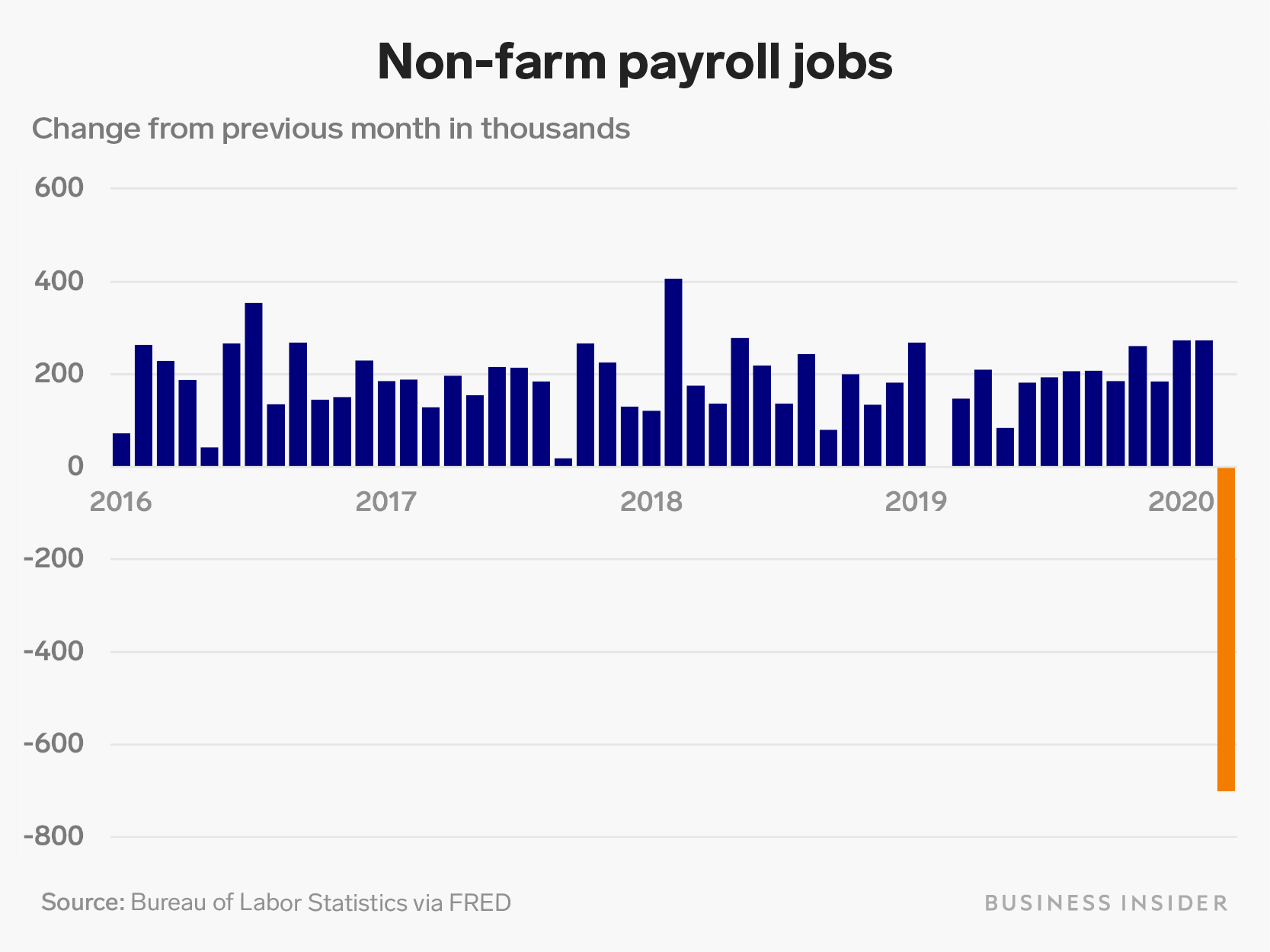 While the contraction is jarring, Friday’s report still doesn’t show the full extent of coronavirus-driven damage. The report includes the week and pay period that ended March 14, so anyone who worked during that week is counted as employed, even if they were laid off midweek.

And numerous changes since that week have sent the labour market and overall economy into a deep freeze. On March 16, President Donald Trump recommended strict guidelines to slow the coronavirus’ spread that included closing schools, avoiding large groups, avoiding nonessential travel, and staying away from bars and restaurants. Initially, the measures were to last 15 days, but Trump later extended them through April 30.

The strict guidelines dramatically slowed parts of the economy by encouraging people to stay at home and practice social distancing. That led to massive spikes in unemployment-insurance filings as workers were laid off by businesses considered to be nonessential. Over the two weeks that ended March 28, a record 10 million Americans filed for unemployment insurance.

Hiring slowed at the start of March

While the Pantheon Macroeconomics economist Ian Shepherdson says the payroll number is “completely irrelevant” overall because of the limited time period it covers, it does indicate the economy had already started showing signs of a slowdown in the first half of March.

It was then when some firms were beginning to send workers home to avoid spreading COVID-19. Those who work in service or close proximity to customers seem to be hit particularly hard, such as waiters, bartenders, entertainers, and those in hospitality and travel industries.


Read more:
Stocks are technically back in a bull market, but Wall Street experts don’t trust it. 6 of them explain why we’re doomed to fall further – and share what traders should do as turmoil continues. 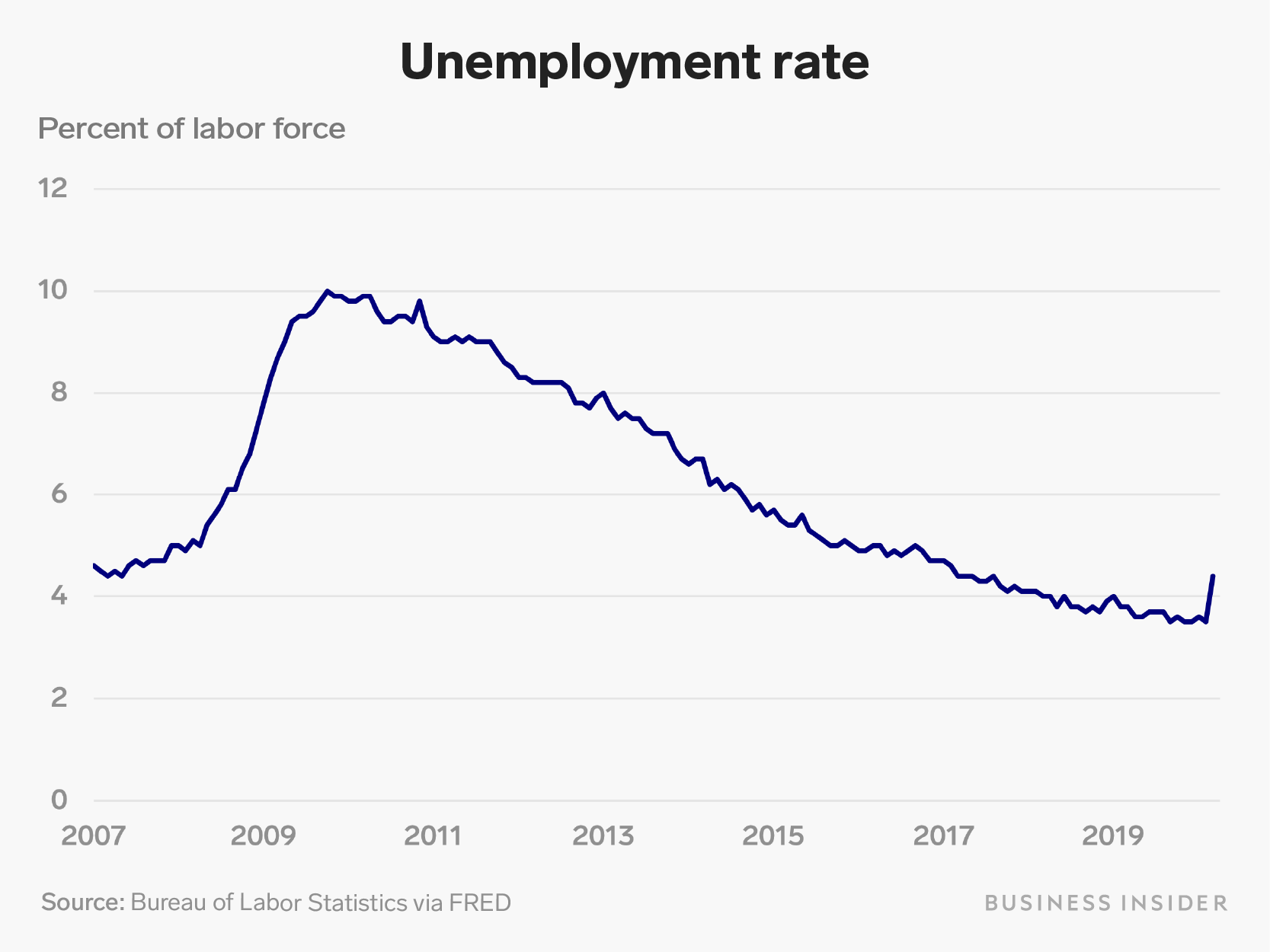 In mid-March, Tom Gimbel, the founder and CEO of LaSalle Network, a national staffing and recruiting firm in Chicago, decided to shut his office and have his employees work from home because of the coronavirus.

“It’s changed our business in a couple of ways in the short term,” Gimbel told Business Insider. He’s seen a challenge in the administrative and clerical side of his temping business, where some companies are not immediately prepared to have employees work from home.

“You could get a client that says we need people,” he said. “And then two days later, somebody tests positive in the office for coronavirus and they send all the people home.” If those workers aren’t set up to do the job at home, they’re out of luck, he said.

Some help is on the way

To combat the economic fallout of the pandemic, Trump signed a historic $US2.2 trillion relief package into law on March 27. The law includes direct payments to many American households as well as relief for distressed businesses, and it expands unemployment by adding as much as $US600 a week to state benefits.

The law is meant to give consumers and businesses the ability to pay bills until the economy can essentially be restarted. The expansions in the law mean many workers who would have previously been left out are now eligible for aid.

Economists aren’t sure how the stimulus package coupled with coronavirus guidelines will affect the labour market over the coming months. Because people have been encouraged to avoid public places, workers may be sitting on the sidelines until the public-health crisis passes. In addition, when expanded benefits actually reach people, they might be an incentive to wait to look for a job.


Read more:
A new survey of 159 pro investors shows experts are looking to buy stocks again. Here’s what 9 of them had to say about where they’re putting money to work.

Molly Surber, 25, was recently laid off from her waitressing position at Prime Quarter Steak House in Janesville, Wisconsin, when the restaurant closed because of the coronavirus outbreak. She filed for unemployment but is waiting on approval, which could take about three weeks, she said. At the same time, her welding classes at a local technical college have been postponed, as it’s not possible to take them online.

She knows some local businesses are hiring but is hesitant to apply for a job that would put her out in contact with others. As of Thursday, Wisconsin’s Rock County, which includes Janesville, had at least 19 COVID-19 cases and one death.

“Do I want to expose myself to the public when I don’t have to?” she told Business Insider. “It’s a Catch-22.”

A future US recession and recovery

Many economists forecast further pain and an inevitable recession ahead. Most are forecasting negative US gross domestic product in the second quarter, showing a contracting economy. As layoffs continue, the per cent without jobs could spike into the teens: Bank of America is forecasting as many as 20 million job losses and a 15.6% unemployment rate in the “deepest recession on record.”

Much of the economy’s future also hinges on public-health policy and how well social-distancing measures work to slow the rate of new infections.

“This is a shock no one could have anticipated, it is not a reflection on people’s business models, and we just need to hold everything in place until people get better,” Martha Gimbel, an economist at Schmidt Futures, told Business Insider, adding that the best economic policy at the moment was one focused on public health.

“The best thing for the economy is for hospitals and doctors and nurses to feel like they have the resources they need to treat this disease,” she said.

Going forward, economists are expecting that the US economy will see a gradual recovery that could be aided by more government stimulus.

“We can have a pretty strong surge back,” Elise Gould, an economist at the Economic Policy Institute, told Business Insider. But she says that would require more aid.

She continued: “We should have aid flowing. It should end when the labour market data tells us that it no longer needs help.”