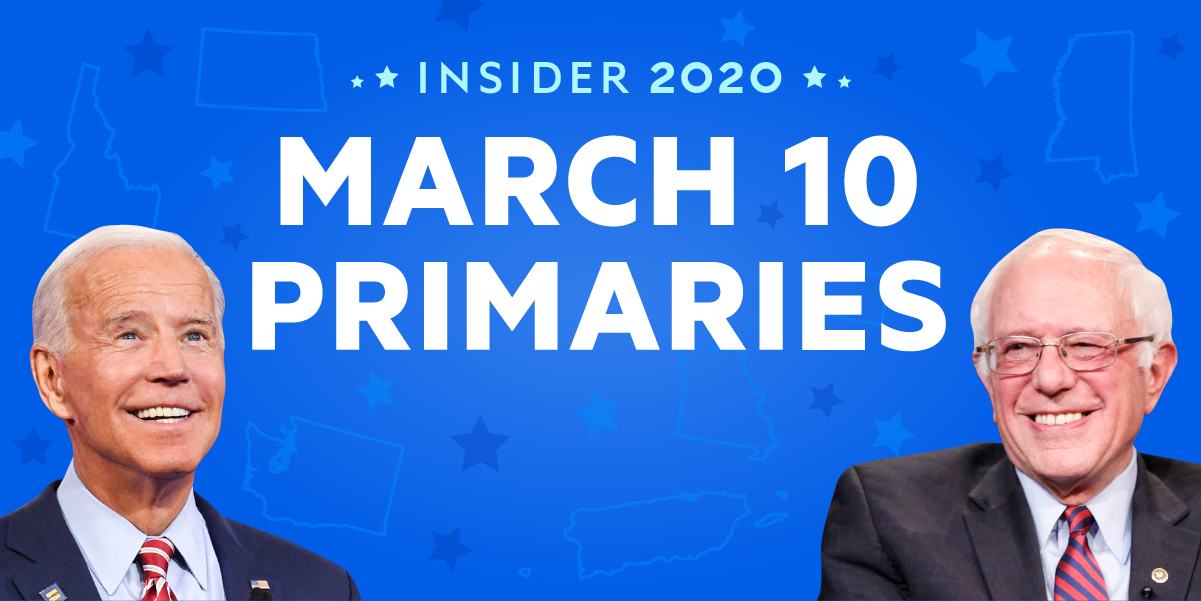 We’ll have live, automatically updated results from Washington when they come in, which still has yet to report full returns. Follow along here.

The six states with elections Tuesday collectively allocate 352 delegates to the convention, making up about 9% of all delegates awarded throughout the Democratic primary contest.

While delegates are allocated proportionally, in nearly every state the minimum threshold to earn delegates is 15% of the vote. This means candidates must break 15% of the vote at either the congressional district or state level to earn any delegates.

Now that the race is narrowed down to just two major candidates, both Biden and Sanders are now likely to pass the delegate threshold in the coming states.

Tuesday’s primaries come a week after Biden’s blowout victory on Super Tuesday, in which he won 10 out of the day’s 16 electoral contests outright and far surpassed Sanders in national pledged delegates.

Biden winning key states like Mississippi, Missouri, and Michigan, which collectively account for 229 pledged delegates, gives him another huge boost in his quest to the nomination and makes Sanders’ path to victory even narrower.

Decision Desk HQ in partnership with the University of Virginia Centre for Politics projects that Biden has so far won at least 163 pledged delegates from Tuesday night’s primaries compared with 97 for Sanders.

Biden also led the latest polls by huge double-digit margins in Michigan and Missouri, two states Sanders either narrowly won or lost to Hillary Clinton in 2016 by margins of 2 percentage points or less.

In Washington state, where Sanders beat Clinton by a margin of 45 percentage points in the state’s 2016 caucuses, Biden also narrowly leads the most recent polls entering Tuesday’s elections.

While there isn’t any recent polling data from North Dakota, FiveThirtyEight’s primary election forecast used other factors for its projections including the results of this year’s primary so far, previous presidential primaries, candidates’ fundraising performance and elite support, and individual states’ voting histories and demographic.