What Is Fracking? This Simple Animation Is The Best Explanation We've Ever Seen U.S. oil production remains at its highest level since the mid-80s, and it’s all thanks to incredible developments in hydraulic fracturing.

Marathon Oil has a great animation on the basics of hydraulic fracturing, or “fracking.” We found it thanks to Mark Perry’s blog.

Intended for novices, it explains how horizontal drilling works and explains the roles of water and sand.

Not surprisingly, the video doesn’t spend much time on the controversies surrounding the environmental risks. That discussion is for another time.

For now, check out these key points from the animation that will help any novice speak more intelligently about fracking.

Note: Ben Duronio, who no longer works at Business Insider, contributed to an earlier version of this.

Fracking is used to extract oil and gas from shale reservoirs more than a mile below the surface. The first step involves drilling down into the hydrocarbon reservoir. When the drill reaches the reservoir, a specialised drillbit is used to allow the wellbore to shift horizontally. This allows for access to multiple wells from one drilling pad. Once the drilling is finished and concrete casing has been installed, a perforating gun is installed that fires through the casings and into the reservoir. A fluid is then pumped into the wellbore and out through the perforations, creating fractures into the rock. This is why it's called hydraulic fracturing. Water, sand, and a chemicals are then pumped deep into the reservoir. The sand in the fluid remains in the fractures, which allows the oil and natural gas to flow to the wellbore easily. The freed hydrocarbons flow up to the surface. The process is repeated along the horizontal section of the well. The entire fracturing process can take at least three months. But the investment can result in a well that can produce for 20-40 years. Here is the entire video. 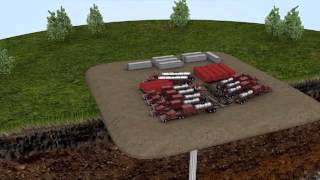 The Fracking Debate Is Over.