An Ohio man renovated an old shipping container into a surprisingly spacious house for $61,000 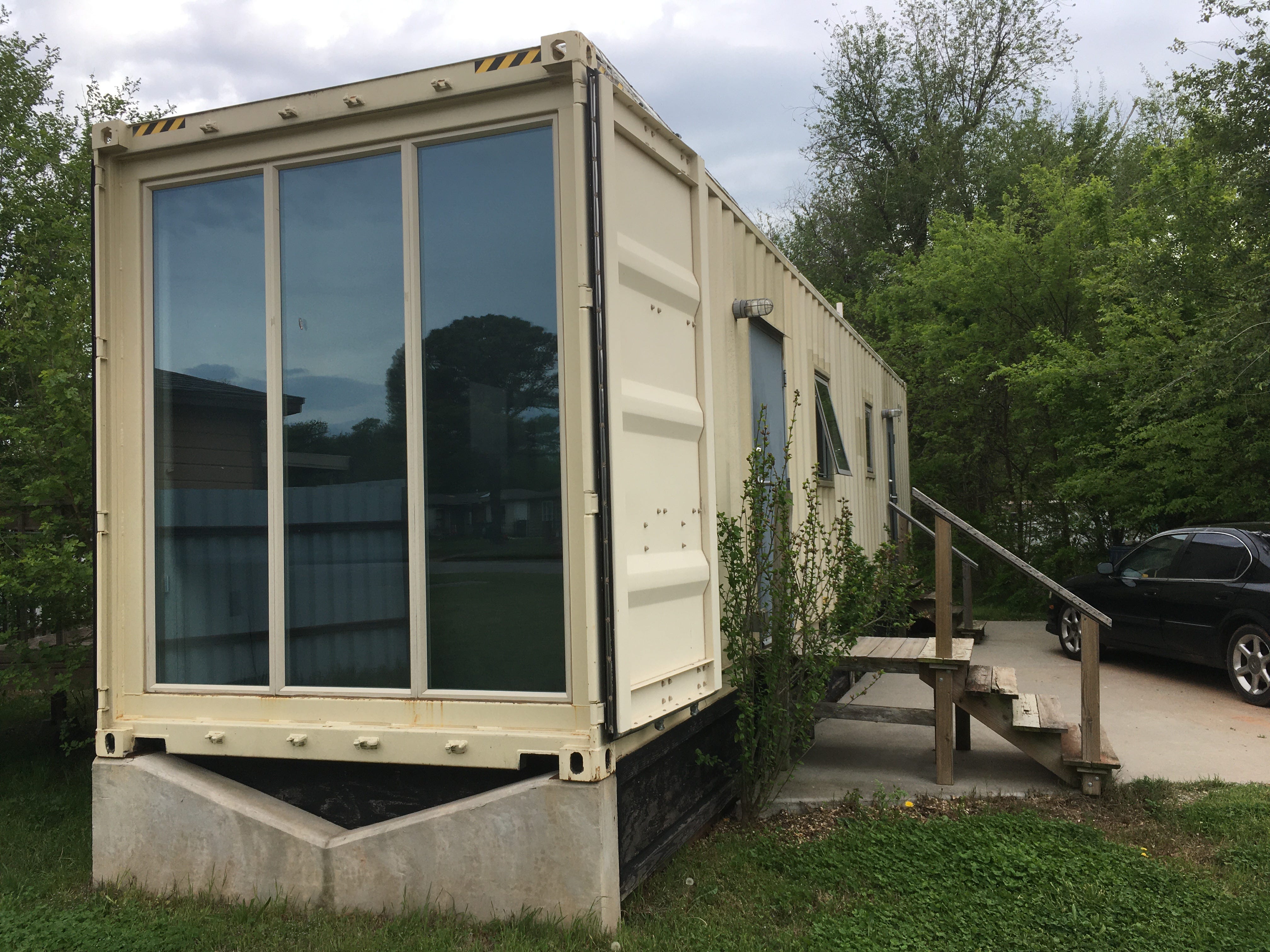 Josh McBee first saw a shipping container home online one day in late 2012. His one-bedroom apartment in Venice Beach, California was feeling progressively smaller, and the blue guest house he saw online made from a big metal box caught his attention.

“I saw the container guest house in Austin. It was 20 feet long, and I thought to myself, ‘I could live in that full-time,'” he said.

For McBee, the simplicity of the living area in a container and the low utility costs appealed to him the most.

From Venice Beach to a box in Oklahoma City

caption
After living in California, Josh McBee was ready to make a change.
source
Courtesy of Josh McBee.

McBee converted his walk-in closet in the one-bedroom in Venice Beach into his own personal bedroom, and rented out the bedroom to travellers through online couch-surfing and vacation rental sites in 2009. He supplemented his income as an industrial researcher and economic analyst through the rentals.

McBee had a large friend group that lived in Oklahoma and land there was cheap. In 2014, he purchased an empty lot in south Oklahoma City for $US2,500, plus realtor costs. “I bought a lot for less than what you would pay for a used car,” he said. “When I moved to Oklahoma City, I went to an architect friend about how to make a container home. We made blueprints and got the correct permits from the city.”

McBee didn’t know anything about construction, but his architect friend knew a professional in neighbouring Tulsa who specialised in converting shipping containers into office spaces for industrial operations. “He asked him if he could do it for residential purposes, and he said yes,” McBee said. “The guy got the box from Houston. Any port city is a hotbed to get those containers. Some people say there are over 1 million unused containers out there that can be used for projects like this.”

According to figures from PortTechnology.org, more than 17 million shipping containers are in circulation globally. Of those, more than 5 million are active, and in total, they make around 200 million trips a year, according to Billie Box.

McBee’s box is 40 feet long, 8 feet wide and 9 feet 5 inches tall. As most containers are only 8 feet 5 inches tall, McBee used the extra height for installation of heating and air and for a small attic space. The intermodal shipping container he bought was considered a “one-tripper,” meaning it only made one journey before being put into retirement.

“It had no dents or rust and the seals were still in good shape,” McBee said. “I got the box in 2015, and it was framed out with windows and doors in Tulsa. I had to hire a structural engineer to design the permanent foundation, which is what the city required,” McBee said. “The problem with some tiny houses is that they are usually on wheels, and Oklahoma City considers that to be technically a trailer, like in a trailer park.”

Once the foundation was set, the $US4,900 intermodal container was delivered on June 5, 2015. McBee hired licensed professionals to install electric, heating, air conditioning, and plumbing, but did most of the build-out like drywall and the bathroom himself. He moved into the home in April 2016.

“My home is not a house,” he said. “It’s a container home. It’s still very much a big metal box that includes the trappings of a regular house. It has one bedroom, a bathroom, a kitchen, a small attic, and a living area.”

caption
The inside of the home where the kitchen meets the living area.
source
Courtesy of Josh McBee

The bedroom is separated from the kitchen and living area by a bathroom. McBee still uses his home to host travellers through Couchsurfing.com and AirBnB. Most of his guests sleep in the living room, which includes a full-size pull out bed. He also has a full-sized futon that can be folded out from under his own loft bed, which is like a bunk bed with only the top sleeping area.

“I can stay in the home and host guests at the same time,” McBee said. “The home is actually the same size as the average American hotel room. It’s just long and skinny instead of square.”

Korrie Scott of Lowell, Indiana, was one of McBee’s guests.

“The couch unfolds into a bed with plenty of room to sleep,” she said. “It’s a really cool, unique and clean home.”

Living in Oklahoma City means dealing with the threat of severe weather and tornadoes, but McBee said he has faith that his home can withstand destructive storms. “The cargo doors that came with the box are still operable and I can close them up. When they cut out the sliding doors for the back patio, we put those cut-outs on a rail like a barn door, so I can shut the whole thing up like a turtle,” he said.

Recently, McBee replaced the flooring in the home, but all in all, he said the entire project from start to finish cost approximately $US61,000 to $US70,000.

“I could have built a traditional house cheaper, but I wanted the durability and the lower energy costs,” McBee said. “I spend less than $US25 a month on energy costs. And I wanted a smaller space. I’m not evangelical about tiny living, and I have nothing against anyone living in a big home. I did it because it makes me comfortable.