Now It's Super Simple To Make Your Own Xbox One Game There’s no harm in admitting it: every gamer, at some point in partaking in the hobby, has wanted to make his or her own game.

It’s no surprise. After all, once you’ve played enough titles you start to recognise the gameplay mechanics that appeal to you and those that are superfluous. Eventually, you start to think up ways you could make your favourite games better.

Microsoft is looking to offer an outlet for that creative energy in the form of “Project Spark,” which the company describes as “an open-world digital canvas that enables anyone to build, play, and share whatever they can imagine.”

The simple toolkit is available for download for free on the Xbox One, Xbox 360, and Windows 8.

The GameSpot team recently got some hands-on time with “Project Spark” on the Xbox One (it’s currently available to beta testers on Windows 8, but will eventually be on the Xbox 360 and One as well).

We’ve highlighted the most interesting bits and added commentary so that you can understand what’s going on at each step.

You start by choosing what kind of environment you want your game to take place in. Then you choose between different times of day: day, evening, or night. Then, you're given a few preset options for the player character. You can use one of the ones they give you or shuffle through more options. From there, you can customise aspects of that character. Or pick out equipment to give him or her. Like a suit of armour, which then has to be scaled and fitted to the character. Next, you get to choose the genre you'd like your game to be. Again, you can shuffle through options until you find what you're looking for. To modify the game world, you choose a tool and then click and drag parts of the environment. Placing structures like buildings or bridges is as easy as selecting them from a menu and dropping them in. The same thing can be said for enemies. You can customise the non-player characters you put into the game as well.

For instance, you can remove the standard helmet and gloves from the warrior character... And even record your own animations by and acting out what the character should do and capturing that motion with the Kinect. To modify the behaviour and abilities of non-player characters, you simply highlight them... ... and modify their actions using simple logical commands based on the framework: 'When this happens, Do this.'

Once you've got these basic things set up, you can jump in and begin testing. You'll even be able to engage enemies in combat, with basic AI and controls established by the genre you chose earlier. The Project Spark team compiled a video of what gamers have come up with after just one week of beta testing: 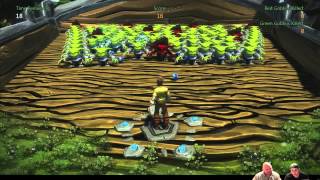 Have you seen the most powerful next-gen console?