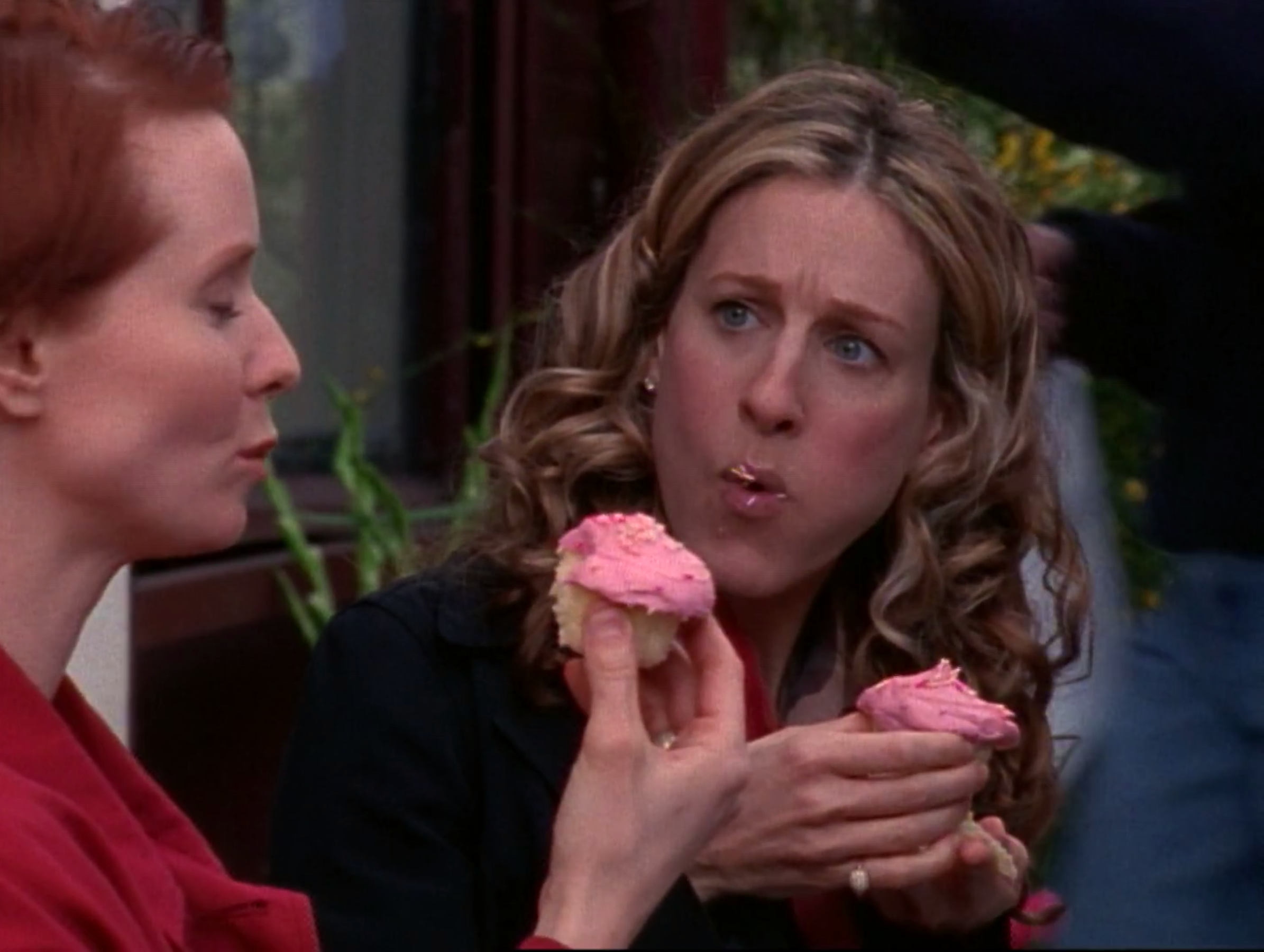 HBO/Sex and the CityMagnolia Bakery has released the recipe for its iconic Carrie Cupcake to Insider.

“Sex and the City” is returning to our screens, and what better way to celebrate than with Magnolia Bakery’s iconic Carrie Cupcake?

The New York City bakery was propelled to fame after its cupcakes appeared on the hit HBO show in 2000, as Carrie and Miranda first spoke about a cute furniture maker named Aidan.

To celebrate the show’s re-launch, which was announced earlier this week, Magnolia released the recipe for its Carrie Cupcake to Insider so that you can enjoy it at home â€” even if you don’t have a Manhattan zip code. During the episode “No Ifs, Ands, or Butts,” Carrie and Miranda sit on a bench outside of Magnolia Bakery’s original Bleecker Street location in Manhattan’s West Village, chatting about Carrie’s new crush as they dig into their cupcakes with pink frosting.

In 2007, Magnolia decided to honour the show that helped make it a household name by creating a cupcake in honour of Carrie Bradshaw. 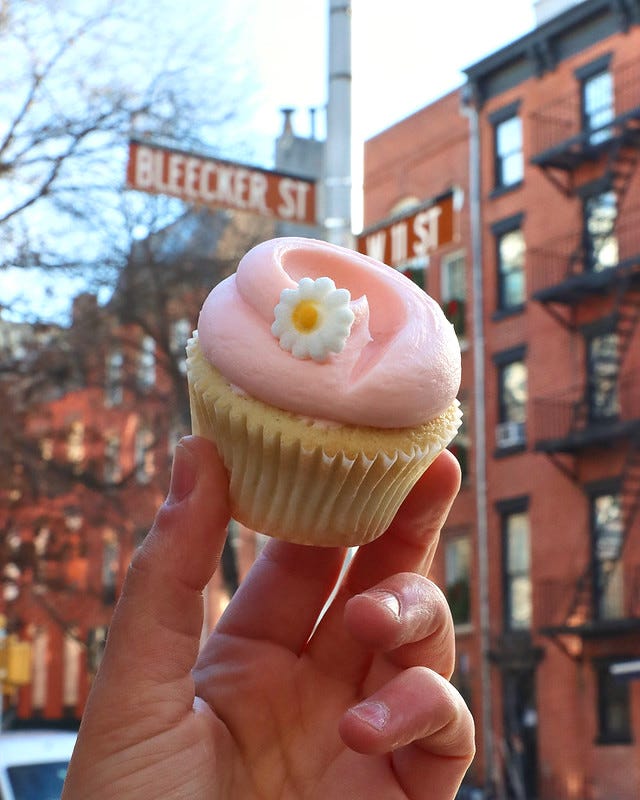 “Our vanilla cupcakes have always been one of our bestselling flavours and we are known for our pastel buttercreams, so it’s no surprise this design remains popular,” Lloyd added. “This staple Magnolia Bakery product has been around for a quarter of a century, and we are sure it will be popular for years to come.”

To make 24 of your own Carrie Cupcakes at home, you’ll need:

Before you start making the Carrie Cupcakes, preheat your oven to 325 degrees Fahrenheit and line two 12-cup muffin tins with paper liners.

In a stand mixer with the paddle attachment, cream your butter, sugar, and vanilla on medium speed until the mixture is light and fluffy (around three to five minutes). Scrape the sides, as well as the bottom of the bowl and the paddle.

Turn your mixer to medium speed and slowly add the egg whites a little at a time, making sure they’re incorporated before adding more. Stop the mixer and scrape down the sides, bottom of the bowl, and paddle again. 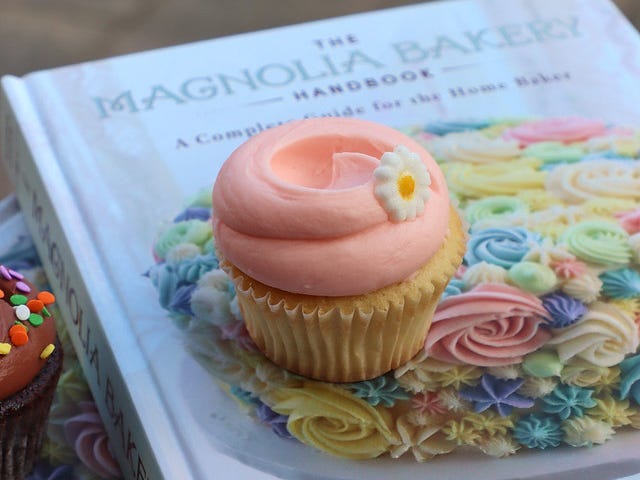 Then turn your mixer to low speed and add the flour mixture in three additions, alternating with the milk mixture and beginning and ending with the dry ingredients. Mix everything for about 15 seconds, just until it’s incorporated.

Stop the mixer and remove the bowl. Scrape down the bowl and the paddle.

Then, evenly scoop the batter into your prepared muffin cups (Lloyd recommends using a Â¼ dry measuring cup). Bake your cupcakes for 20-22 minutes, until the tops spring back when touched and a cake tester inserted into the centres comes out clean. First cream the butter on medium speed in a stand mixer with the paddle attachment for three to four minutes, until it’s light and fluffy. Add the vanilla and mix for one minute, then scrape down the bottom and sides of the bowl.

With the mixer running on low speed, gradually add the powdered sugar, one cup at a time. Scrape down the bottom and sides of the bowl again. When you have added the third cup of sugar, the mixture will start to thicken and appear dry.

Add three tablespoons of the milk, then add the rest of the sugar â€” add more milk if the buttercream is too stiff. The desired consistency is creamy and smooth. Scrape down the bottom and sides of the bowl. 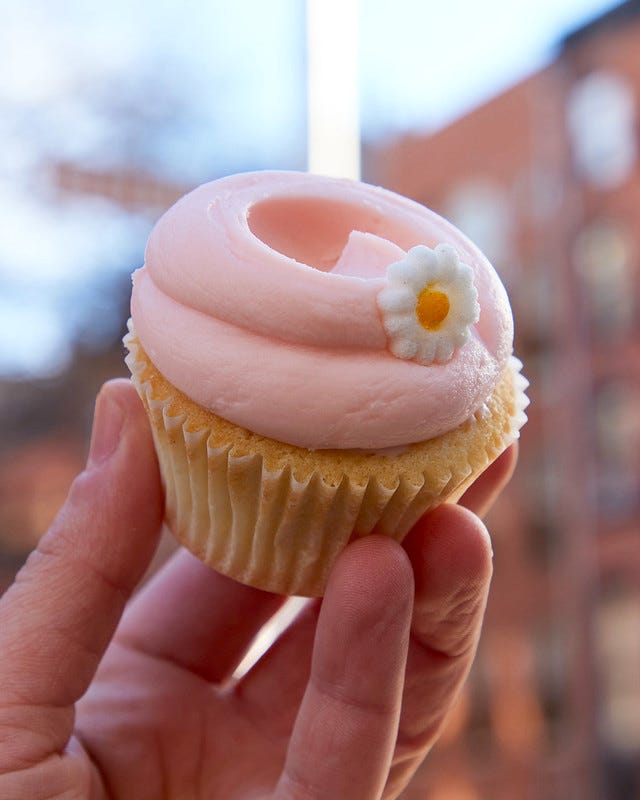 Magnolia BakeryThe Carrie Cupcake continues to be one of Magnolia’s bestsellers.

Continue to beat the icing on low speed for one to two minutes longer, until it’s smooth and creamy. Do not mix on medium or high, as it will add too much air and be too fluffy. Add a few drops of your desired food colouring â€” one drop at a time â€” and mix thoroughly to get the right colour.

Use an icing wand to spread your buttercream over the cupcakes until they’re fully covered. Top with a daisy decoration. You can store any extra icing at room temperature in an airtight container for up to three days.

And if baking isn’t really your thing, you can also order the Carrie Cupcakes from Magnolia on Goldbelly, which ships across the US.

And if banana pudding is more your style, you can find the full recipe for Magnolia Bakery’s second most-famous dessert here too.