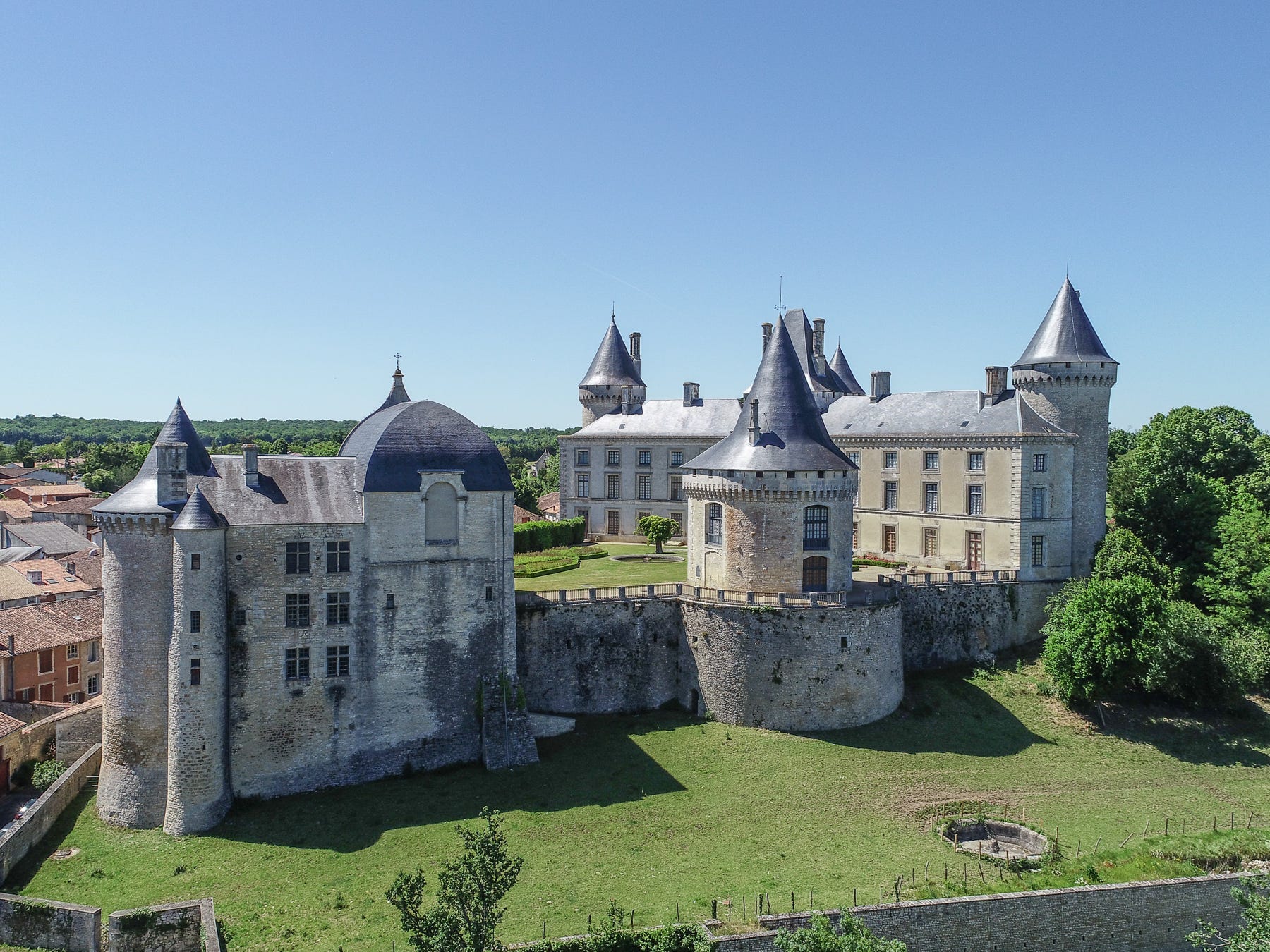 Courtesy of Patrice BesseAn exterior shot of the castle.

A literal castle is on the market in France, and it can be yours for a mere $US3.3 million.

The massive property once belonged to the Rochefoucauld family, according to luxury real-estate agency Patrice Besse, which holds the listing. The Rochefoucaulds are among the oldest and most famous families of the French nobility.

The property, a protected historic monument, “has been in the same family for 1,000 years, and it is like a work of art that has never been on the market,” Patrice Besse, the founding president of the real-estate agency of the same name, told The New York Times.

Despite being first built roughly 1,000 years ago and extensively damaged in the Hundred Years’ War and during the French Revolution, the home is in excellent condition, having undergone several restorations and renovations over the centuries. It’s even been outfitted with a few modern conveniences, including new windows and central heating in some parts of the castle, per the listing.

The current owners â€” Sixte de La Rochefoucauld and his wife, Ingrid, who are both in their mid-sixties â€” told The Times of London that they need to sell the property on the public market due to Sixte’s declining health and because “maintaining the building is costing a crazy amount of money.” They were unable to find someone else within the surviving branches of the Rochefoucauld family to buy the castle.

Take a look inside the historic home.

The construction of the Château de Verteuil began in the 11th century, per the listing. The sprawling property has been through a few renovations since, most notably after the French Revolution. 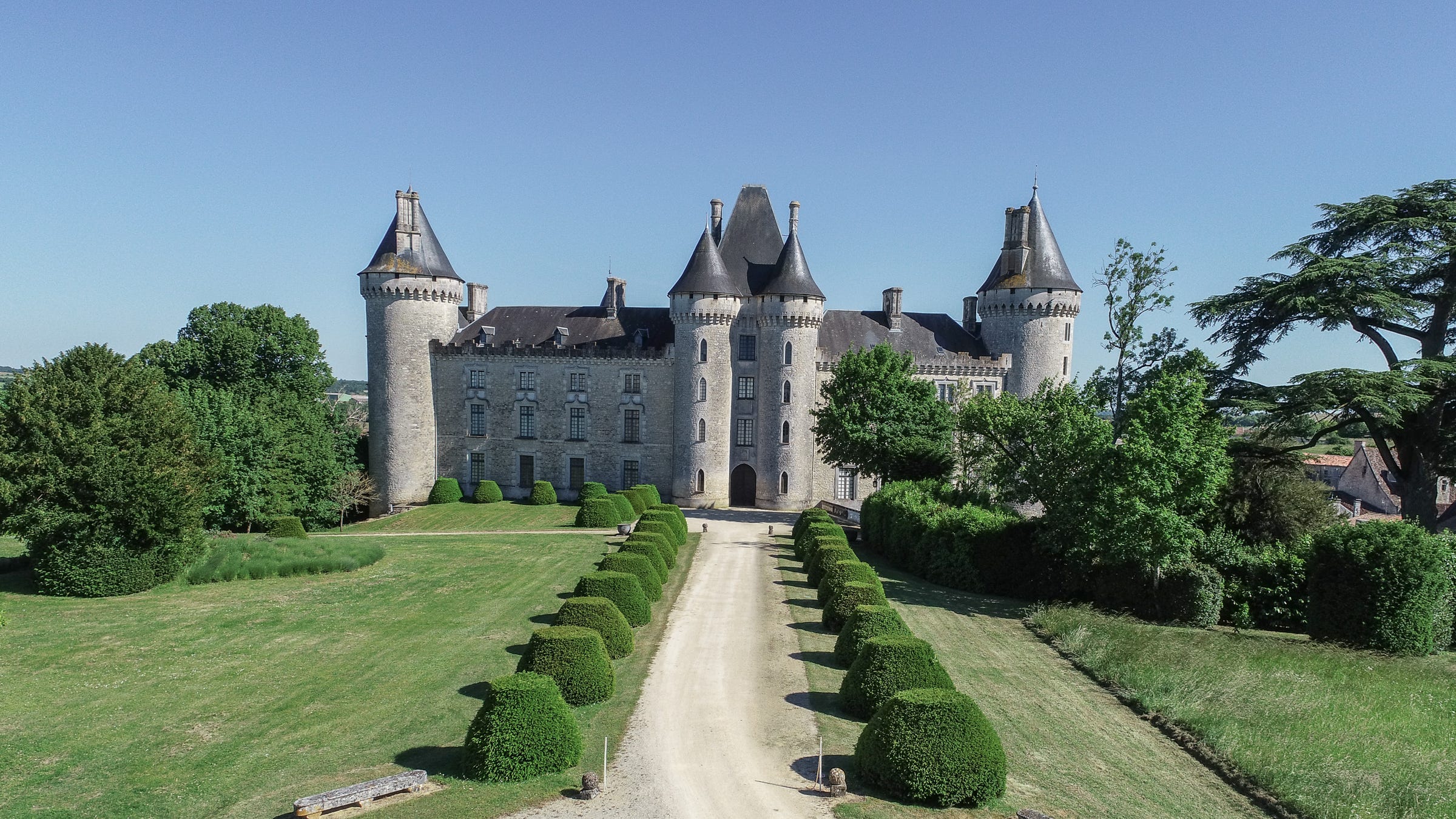 Courtesy of Patrice BesseTrees and benches line the path from the entrance to the main castle.

Château de Verteuil belongs to the Rochefoucauld family – a prominent name in French nobility – and has for 1,000 years. Per Britannica, the family has produced multiple dukes and a social reformer who laid the groundwork for French agriculture.

The castle is located in a village in the Southwest of France along the Charente river, about two hours from Paris by train.

Per Patrice Besse, the agency which holds the listing, the castle is about as long as the village it’s situated in and overlooks the river.

The massive V-shaped castle has 14 bedrooms with attached bathrooms, according to Patrice Besse. It has a central pavilion and two wings capped by towers. 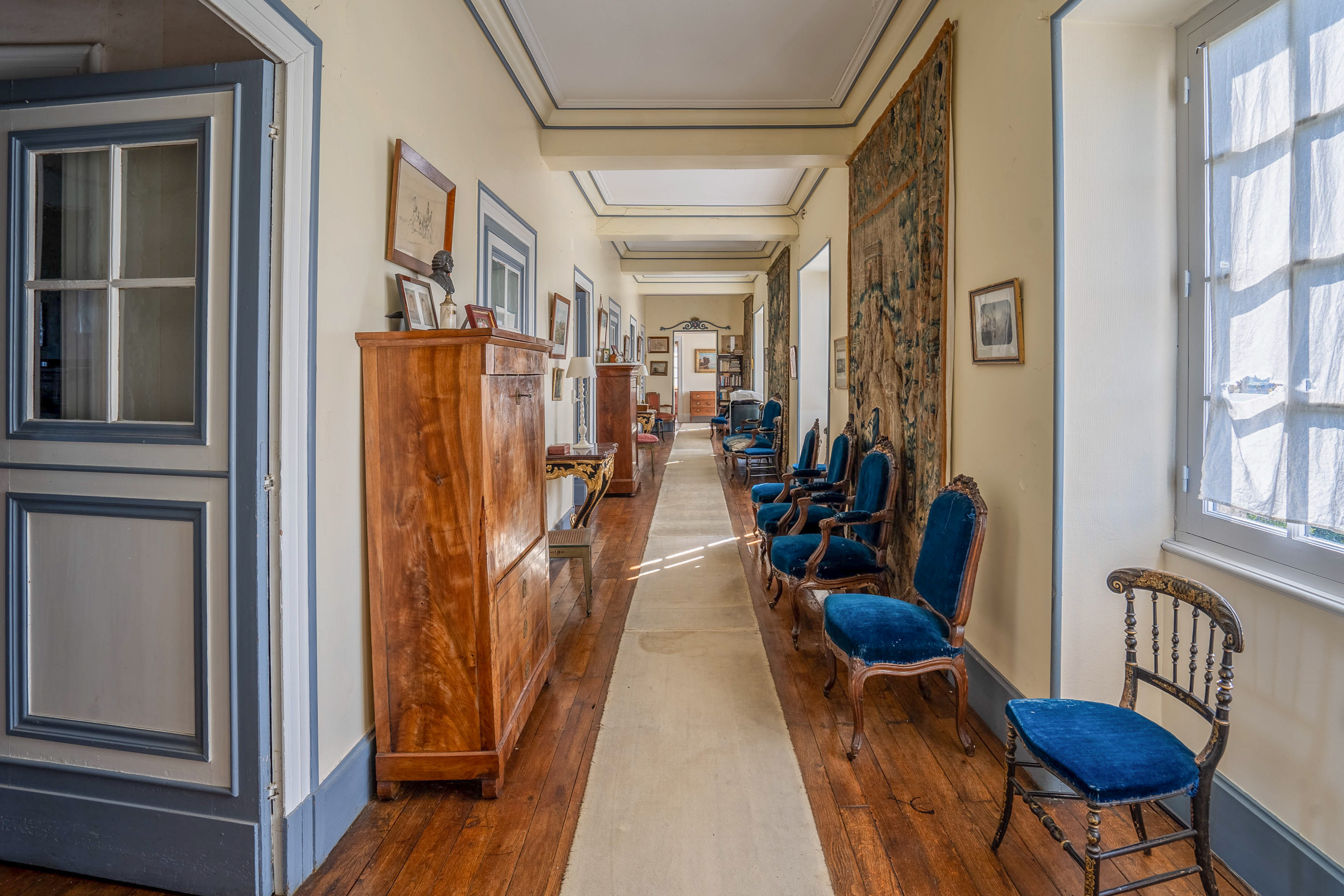 Courtesy of Patrice BesseA corridor lined with upholstered chairs that match the colour palette of the rooms.

Two important events in European history, the French Revolution and the Hundred Years’ War, left their mark on the castle. During each, it suffered significant damages and had to be extensively restored.

Patrice Besse says the first round of restoration work took place in the 1400s after sieges during the Hundred Years’ War, which refers to a series of wars between France and England between 1337 and 1453. According to The New York Times, the original structure was destroyed during that war, then rebuilt with the original stones.

In the 1500s, the Rochefoucauld family member who next owned the castle worked with the King of France, Francois I, to renovate it in the Italian Renaissance-style with the help of Italian craftsmen, per the listing.

The most extensive restoration work took place after the French Revolution. The castle had been severely damaged by a major fire in 1793. 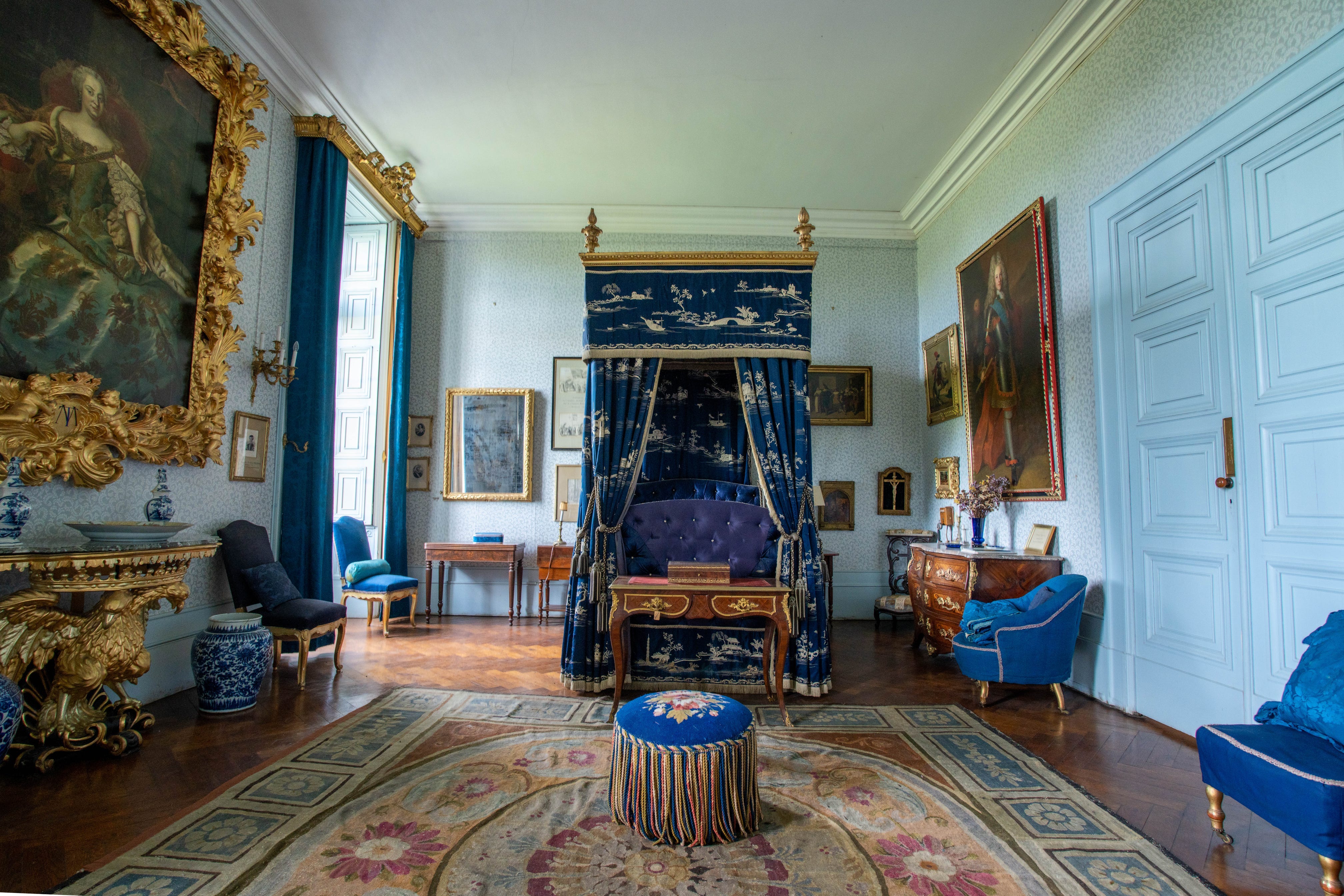 The first floor has a kitchen with coffered ceilings, a vaulted entrance hall, two sprawling lounges, a reception room, and one small bedroom, according to the listing.

Accessible by three different flights of stairs, the second floor has two more lounges and four more bedrooms. Two of those bedrooms are more formal than the rest and have hosted prominent royal figures, according to The New York Times. One of the bedrooms is even called “la chambre Queen Mum” because the Queen Elizabeth The Queen Mother stayed there during a visit in 1980, The Times of London reports.

The third floor has the lion’s share of bedrooms – nine, per the listing – as well as a marble fireplace, linen room, and a corridor that look out onto the courtyard.

Per The Times, the new owners also have the option to purchase the ornate furnishings, which aren’t included in the listing price.

“The buyer will be able to choose from a wide range of furniture, paintings and decorative objects, like 17th-century Italian furniture, a Louis XVI commode, and Murano chandeliers,” Besse, the president of Patrice Besse agency, told The Times.

The Louis XVI Room, pictured below, is one of the lounges on the first floor. 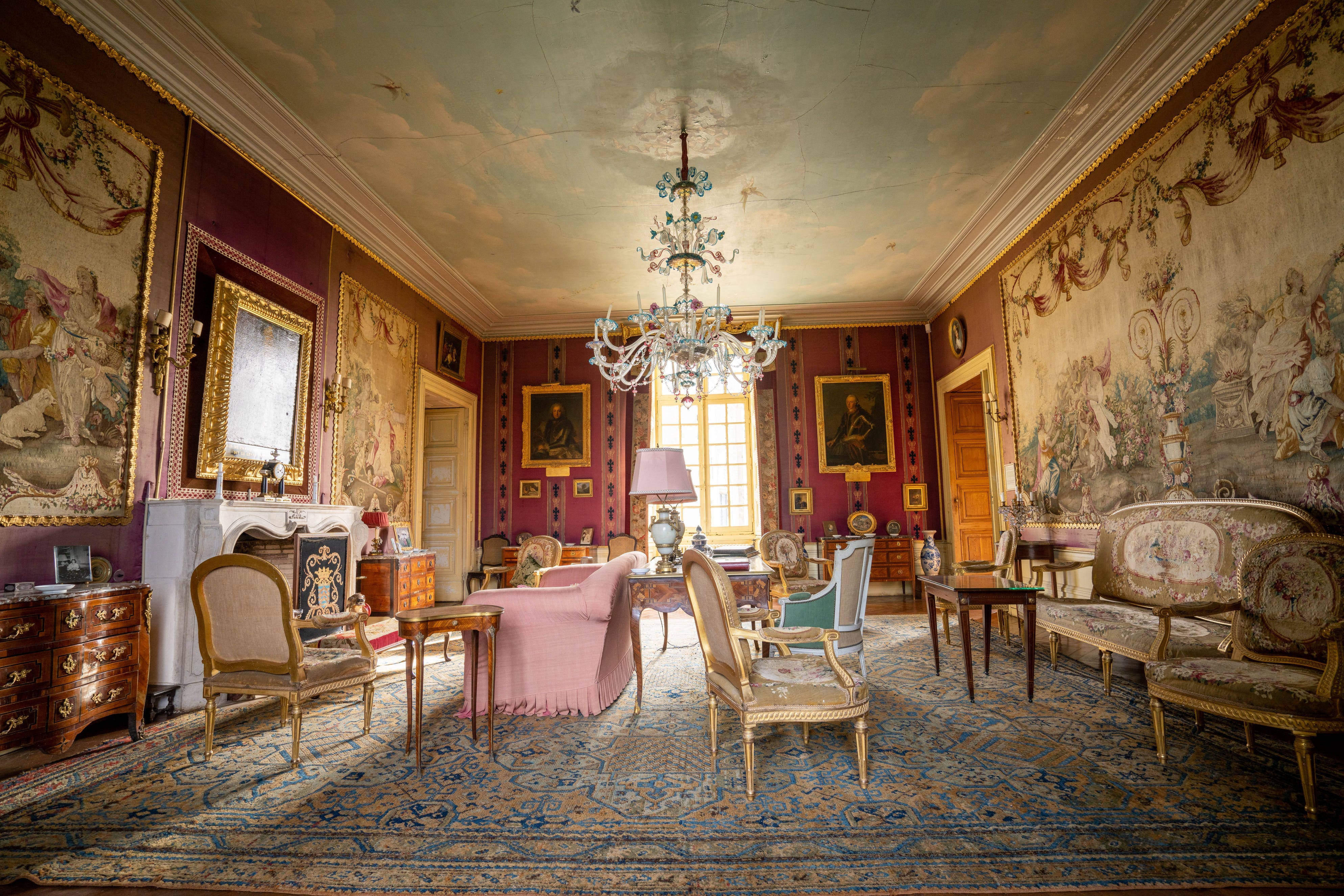 Courtesy of Patrice BesseThe Louis XVI Room is named after the last king of France.

Named after the last king of France, the extravagant lounge has a painted ceiling and chandelier.

King Louis XVI ruled the country from 1774 until 1792 when the monarchy was abolished as an aftermath of the French revolution, historian Jeremy David Popkin wrote for Britannica. He was executed by guillotine in 1793.

Another one of the castle’s lounges, the Unicorn Lounge, shares the same high ceilings and chandeliers, per the listing photos. 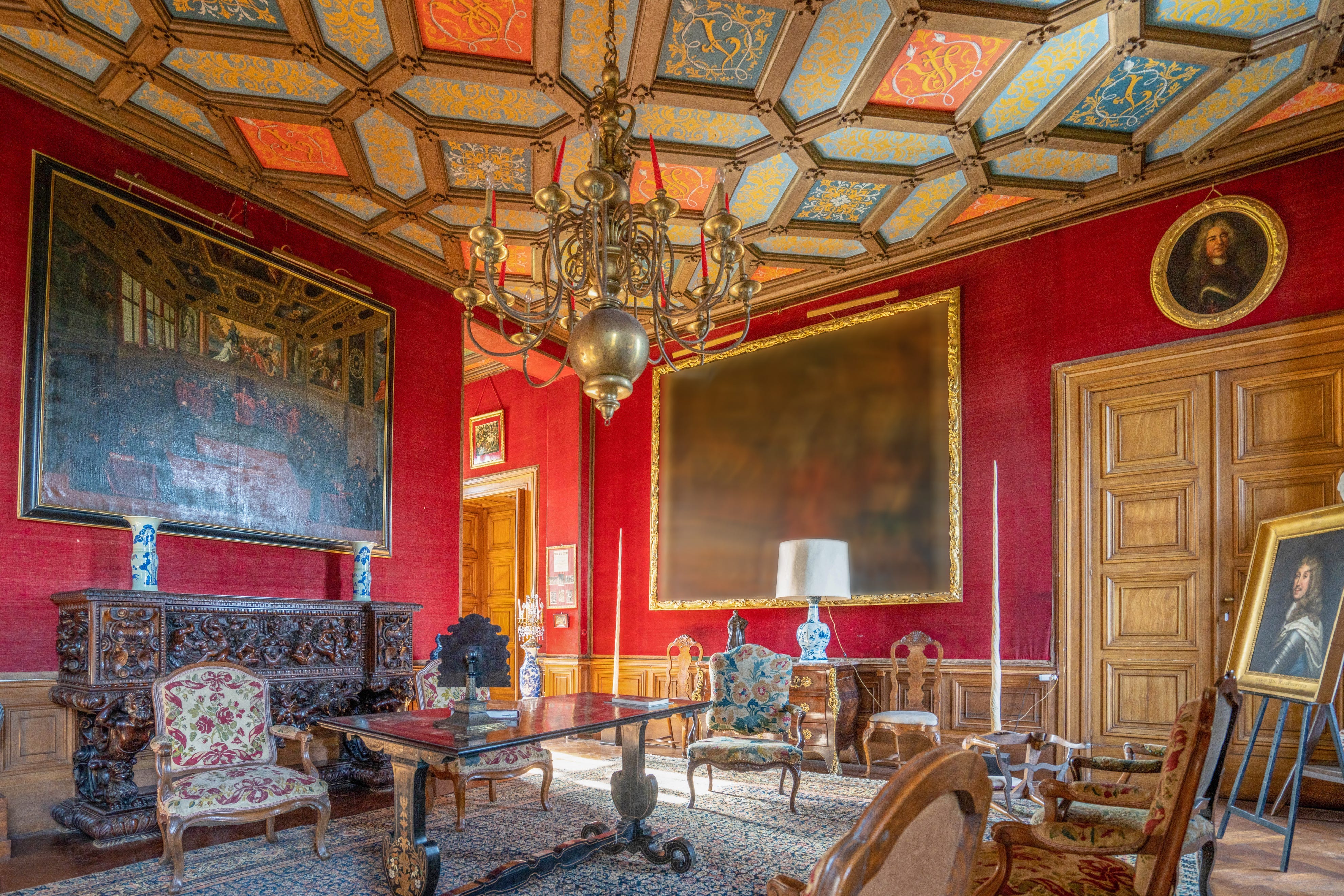 The Unicorn Lounge also has a well-decorated ceiling and several large art pieces on the wall.

In its listing, Patrice Besse described the lounges as “intimate” and great places to entertain guests.

The Rose Salon features massive windows that let in plenty of natural light. Like the other lounges discussed in the listing, this one also has a chandelier and artwork. 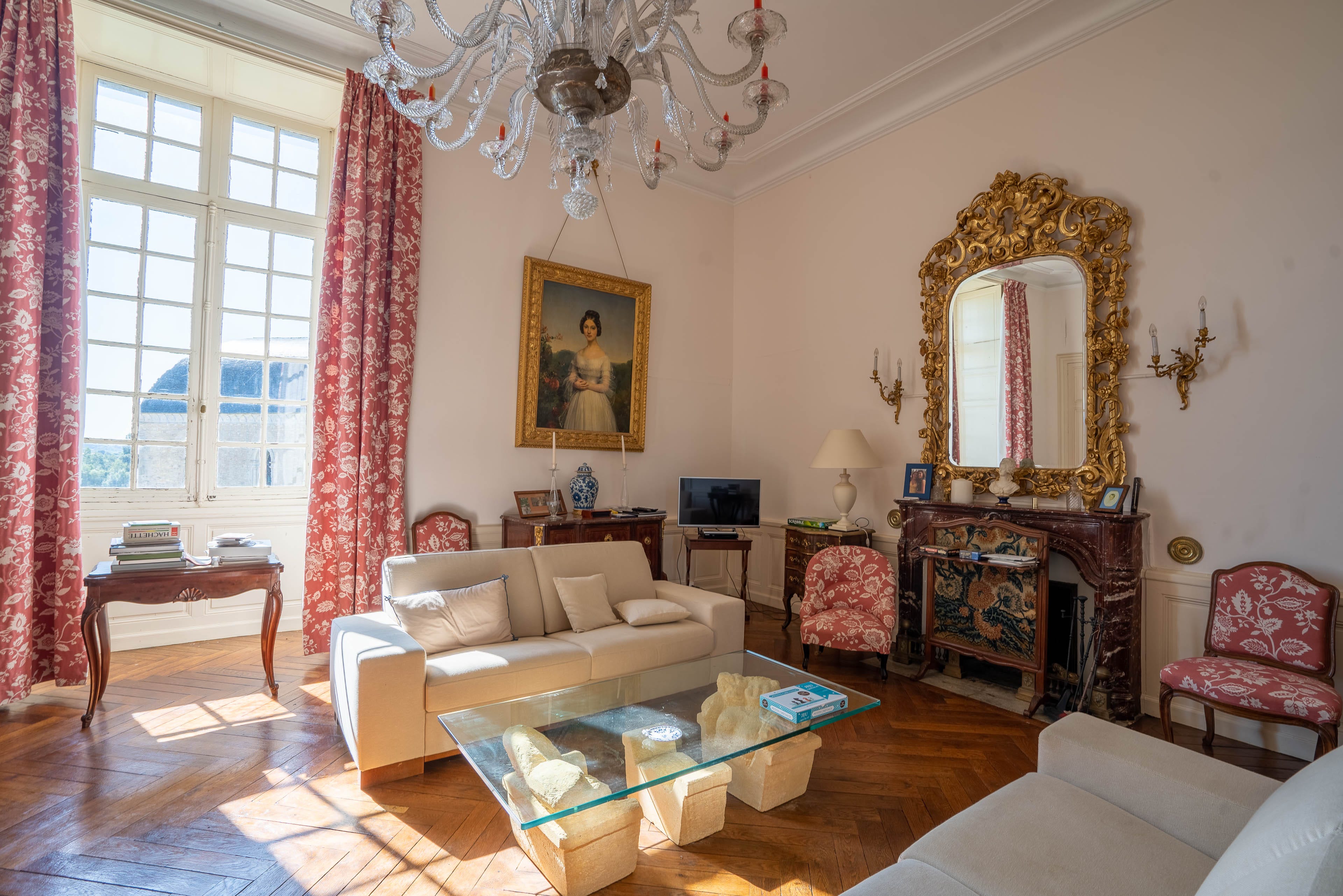 Courtesy of Patrice BesseThe Rose Salon on the second floor.

Per Patrice Besse, the castle once housed the Unicorn Tapestries that are now on display at the Met Cloisters museum in Manhattan.

Described by the Met as “among the most beautiful and complex works of art from the late Middle Ages that survive” they are made of silk and fine wool and feature the image of a unicorn tied to a tree enclosed by a wooden fence.

American billionaire and philanthropist John D. Rockefeller Jr. bought the artwork in 1929 and donated it to the museum eight years later, per museum records.

The library, spread out over two levels, holds over 1,000 books, per Patrice Besse. 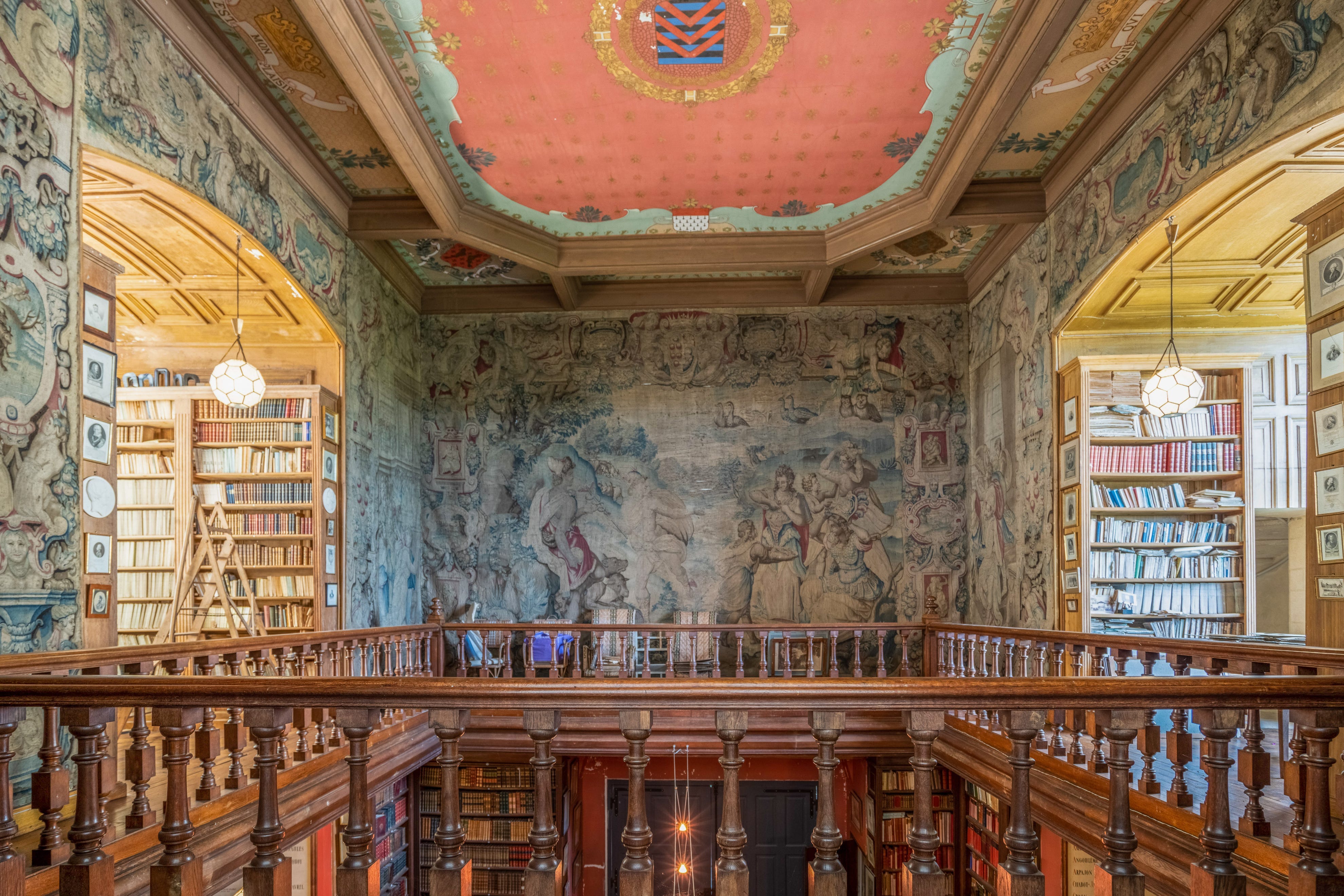 The library has vaulted ceilings and is located at the site of a former watchtower, according to the listing.

A hidden staircase from the ground floor leads to an upper level featuring tapestries with scenes from mythology and the coat of arms of the Medici family, the Italian political dynasty.

There are several chapels on the castle grounds, according to the listing agency. 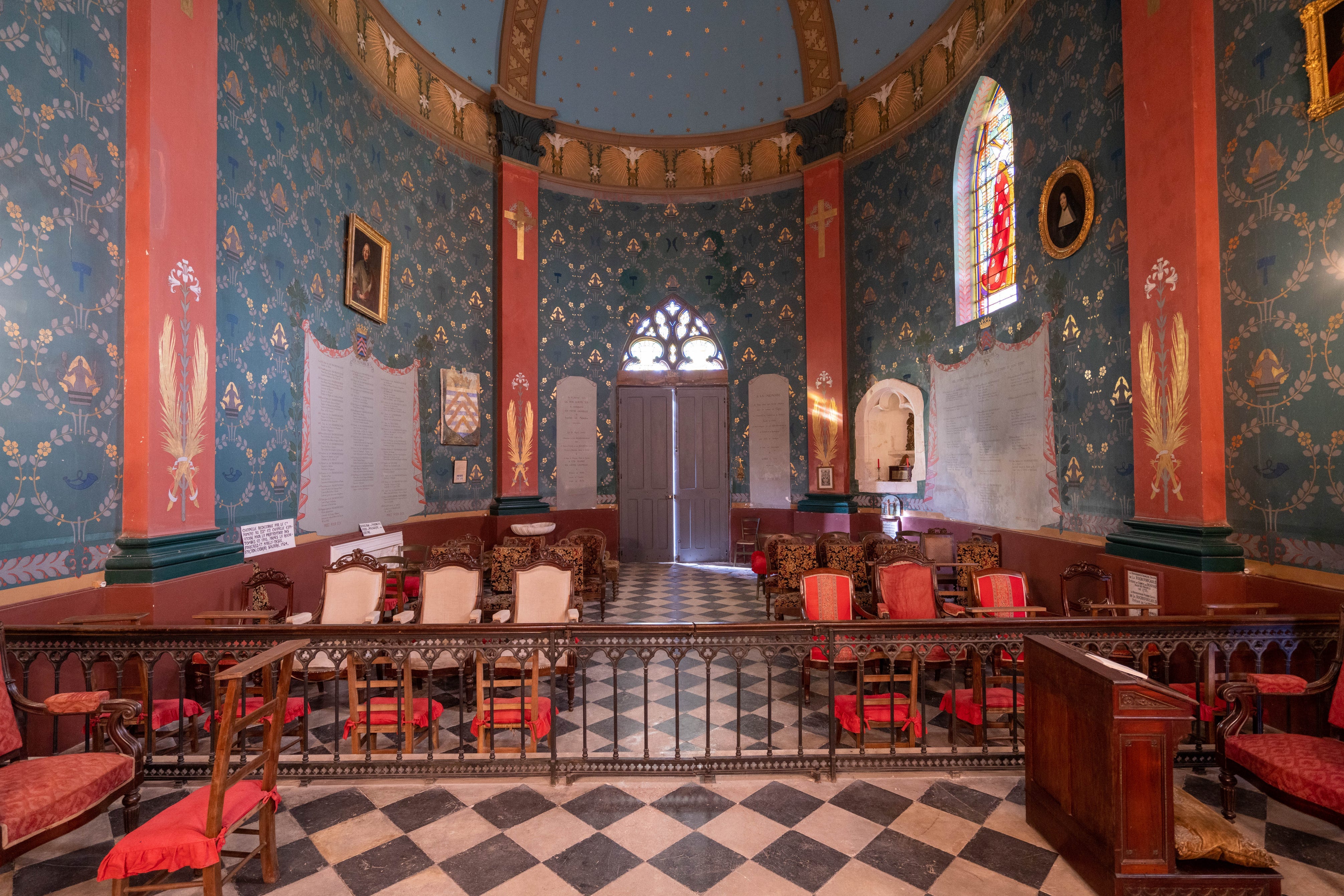 Courtesy of Patrice BesseOne of the castle’s multiple chapels.

The castle has multiple chapels dating back to the 11th and 12th centuries, two of which were only discovered in the 20th century, per the listing.

The family restored the main chapel in the late 1800s and replaced the chapel’s roof in 2013.