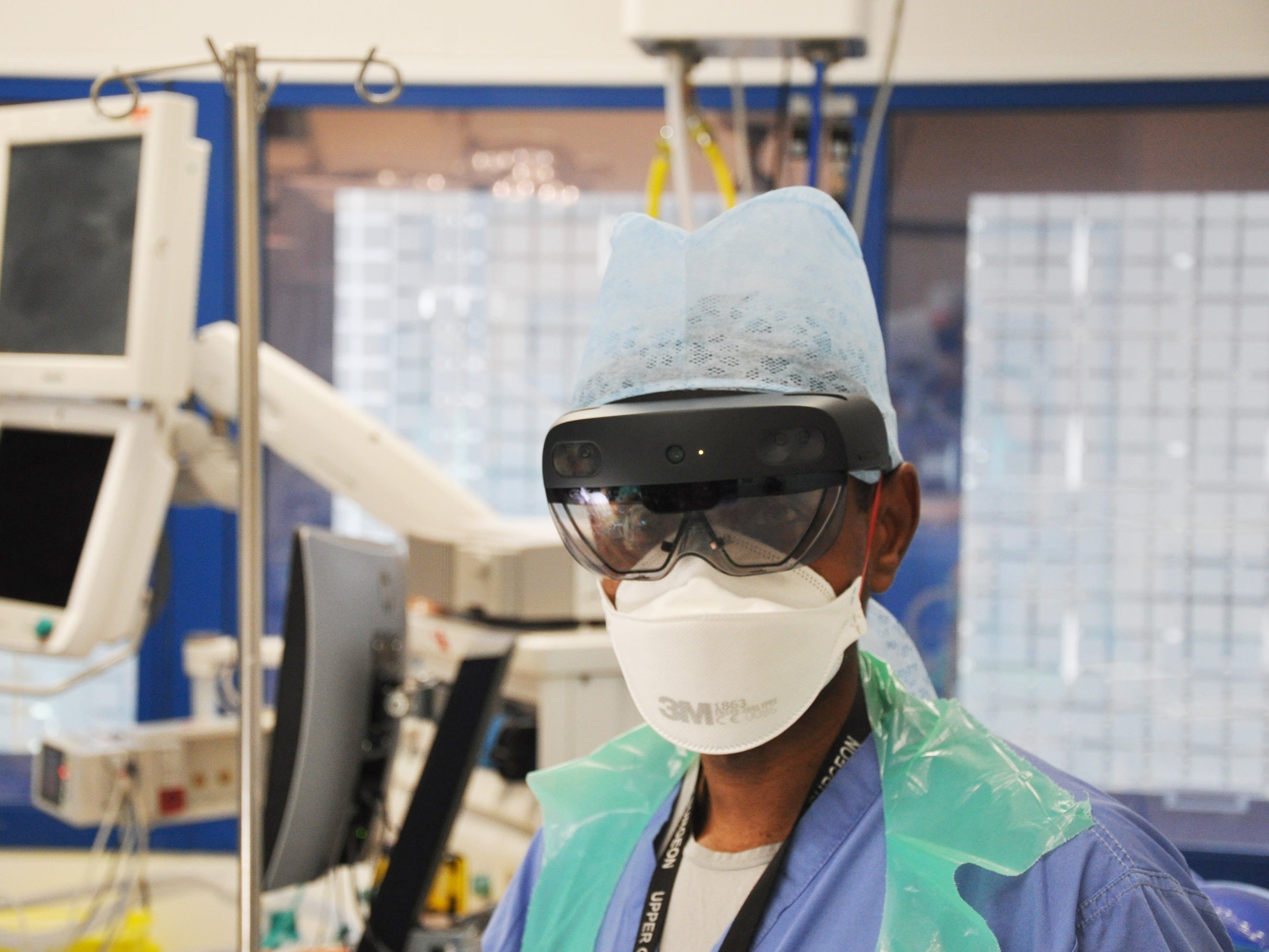 MicrosoftThe Microsoft HoloLens 2 currently being deployed by doctors in London.

Doctors in London hospitals are using mixed-reality headsets from Microsoft to reduce the amount of staff coming into contact with COVID-19 patients. The headsets look like a visor that encircles the head, and are equipped with sensors and a camera around the headband. Inside the visor is a little screen where holographic images are projected for the wearer to see.

Dr. James Kinross, a surgeon and lecturer who has been using the HoloLens for three years, told Business Insider what it’s like to work with the headset as a doctor.

“One of the things that you can do is that you can take, for example, a scan or an image taken from an x-ray. You can reconstruct it into three dimensions and you can project that as a holograph into the operating field,” he said. Doctors can move and manipulate images in the lens using their hands by pinching the images.

The technology has been used in the past to help doctors when reconstructing limbs after surgery by identifying blood vessels, and for treating patients with pelvic cancer. At the onset of the coronavirus, however, doctors saw a new way the technology could be useful. 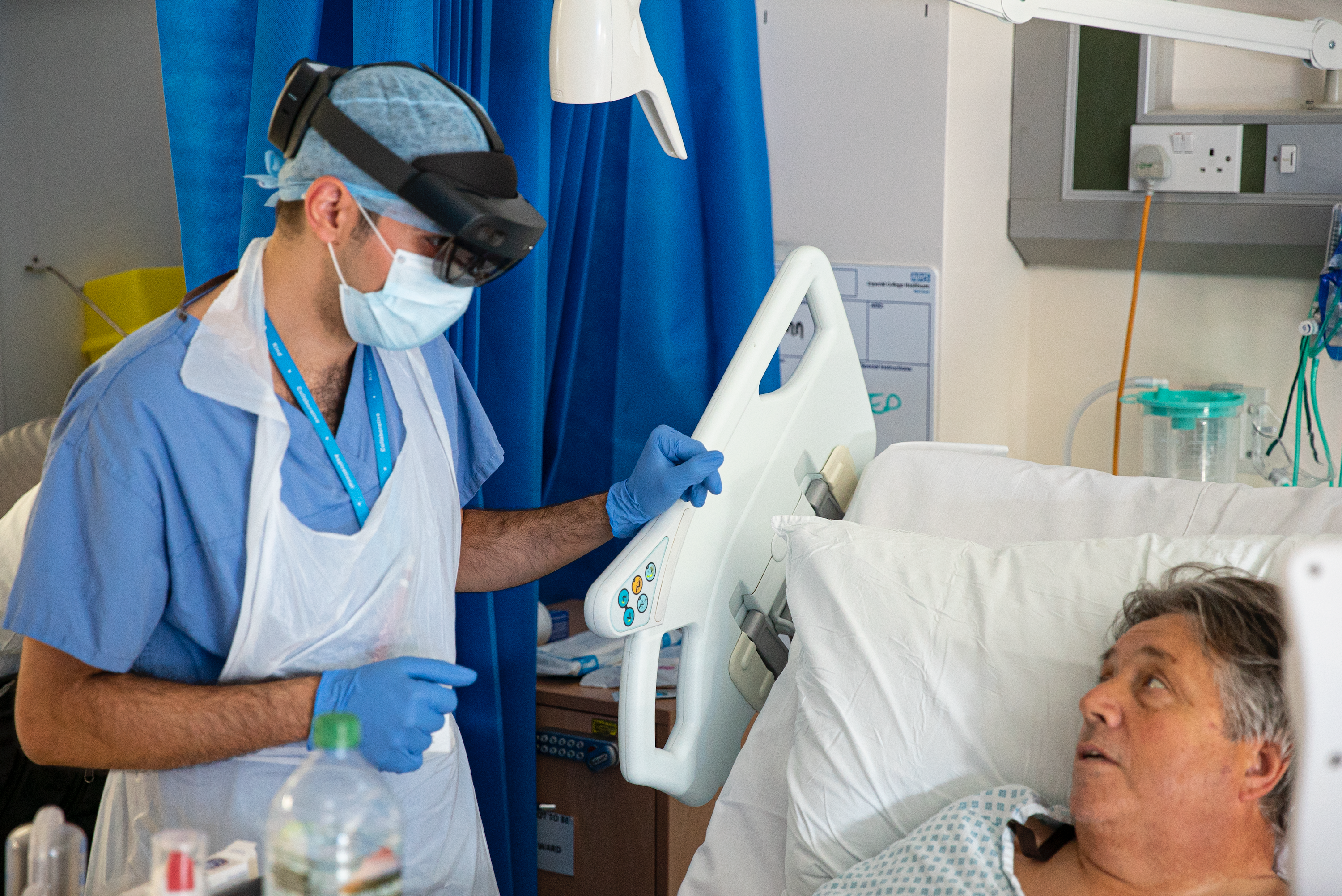 MicrosoftA doctor talks to a patient while wearing the HoloLens.

“We started using the HoloLens during COVID because healthcare workers were coming to harm because they weren’t adequately protected,” Kinross said. The UK has struggled to provide staff in its National Health Service (NHS) with adequate amounts of Personal Protective Equipment (PPE) to protect them during the pandemic.

HoloLens comes with a piece of software called Remote Assist that works via Microsoft Teams to allow doctors to reduce the number of staff going out onto wards by essentially carrying a holographic image of their colleagues with them when they go on their rounds, rather than multiple doctors having to be on the same ward at once.

“Instead of you seeing my face, you would see my first-person view, and you would pop up as a holographic image and I would see you projected into the clinical space. So I could have a heads-up conversation with you whilst I’m performing a surgical task,” Kinross said.

“We thought that was quite useful because what we were able to do quite quickly is instead of sending six or seven doctors in a team onto a COVID positive ward, we could send one lucky volunteer, and the remaining doctors could be kept safe,” he added.

Junior doctors are kept in a COVID-isolated room and are able to see what a consultant is doing, communicate with them, and pull up relevant images and scans to project into their helmet. This method is also being used to teach medical students who are no longer allowed on the wards. MicrosoftWhile one doctor wearing a headset goes on the ward, other doctors can watch and communicate with them from an isolated room.

Kinross and his colleagues ran a four-week test and found that they were reducing the number of doctors coming into COVID contact by about 80%.

“There is significant momentum with HoloLens across many NHS trusts, including University Hospitals of Morecambe Bay, University College London Hospitals, The Leeds Teaching Hospital, and Alder Hey Children’s NHS Trust,” a Microsoft spokesperson told Business Insider. “Together with Imperial College Healthcare NHS Trust, these trusts are working collectively to advance the use of HoloLens to protect medical professionals in their fight against Covid-19.”

The tech has also come in handy because it enables hands-free viewing of information while wearing PPE.

“Once you’re scrubbed up and you’re sterile, you can’t go and touch a computer to find out any further information that you need or you may want,” Kinross pointed out. With the HoloLens however, that information can be pulled up and manipulated in virtual space.

The HoloLens needed some physical adaptations to fit with PPE face shields. “We had to do a bit of ‘Blue Peter’ stuff where we were sort of cutting holes and face shields. You have this super expensive holographic computer, you know, and you’ve got sticky tape and scissors,” said Kinross. 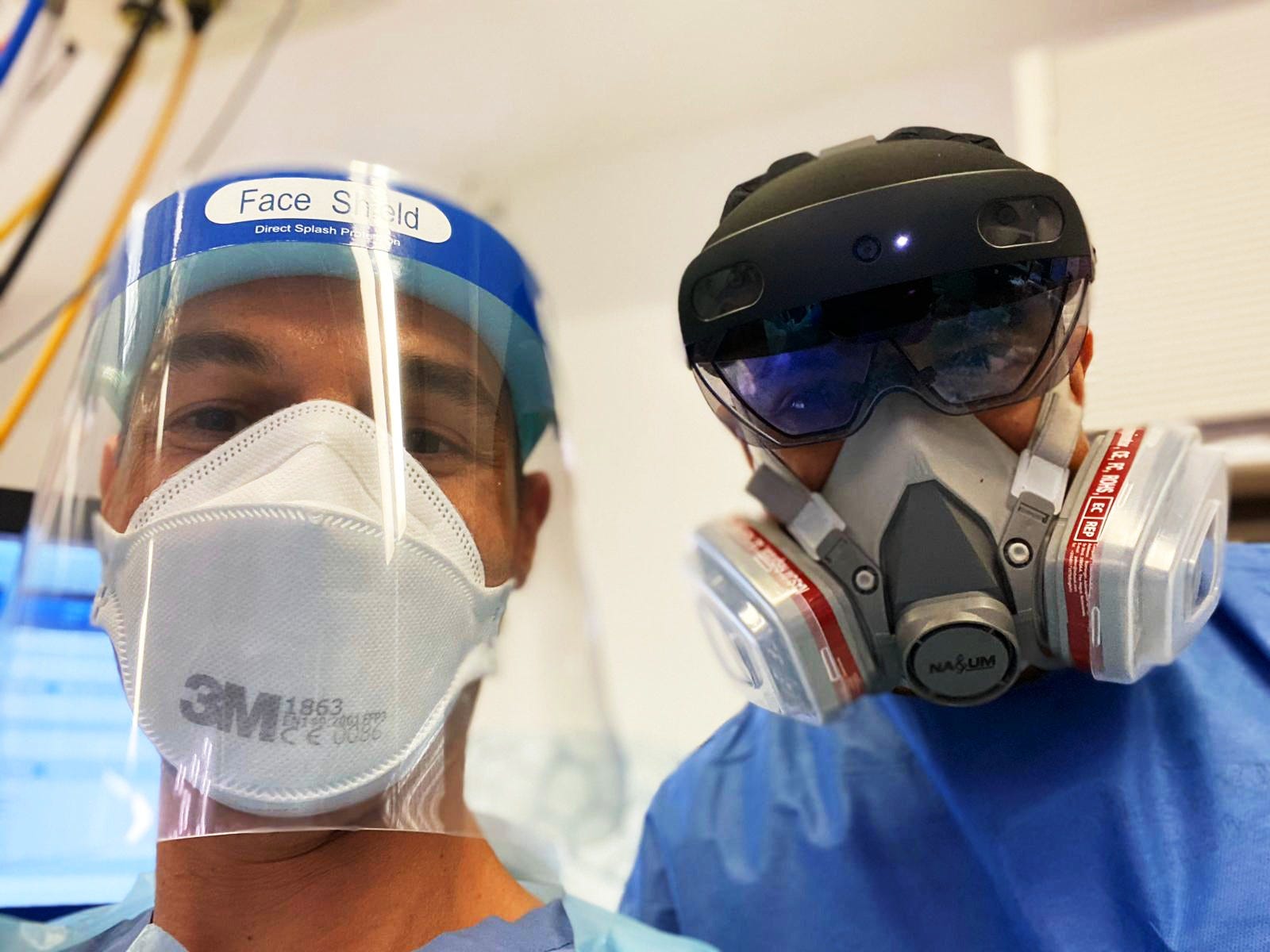 MicrosoftThe doctor on the right is wearing a HoloLens 2 headset.

Another side-effect of reducing the number of doctors on the ward was also a reduced usage of PPE overall. “We were saving around 700 articles of PPE clothing per week per ward,” Kinross said.

As the pandemic abates, Kinross also thinks new communication technologies will be vital to doctors as they return to normal practice. “What you’re going to see in healthcare is that we are going to have distributed networks of care,” he said, pointing out that his own cancer surgery has had to move out of his usual hospital.

“I’ve got to be able to communicate. And if my colleagues are not with me in the building, I need to be able to share information quite quickly,” he said.

Keeping humans in the loop

The coronavirus has brought with it strange and unnerving stories about hospital robots into the press, but Kinross says patient response to the headsets has been largely positive. “They generally are interested in it and like it, and they don’t really mind doctors looking after them wearing a silly headset,” he said.

Kinross, who specialises in robotic surgery, believes robots have an important role to play in the future of medicine, but the advantage of the HoloLens is it doesn’t replace human interaction.

“With these technologies you can still hold someone’s hand and you could still look them in the eye and when you’re really sick – sometimes you just want someone to hold your hand,” he said.