The bizarre origins of the lizard-people conspiracy theory embraced by the Nashville bomber, and how it's related to QAnon 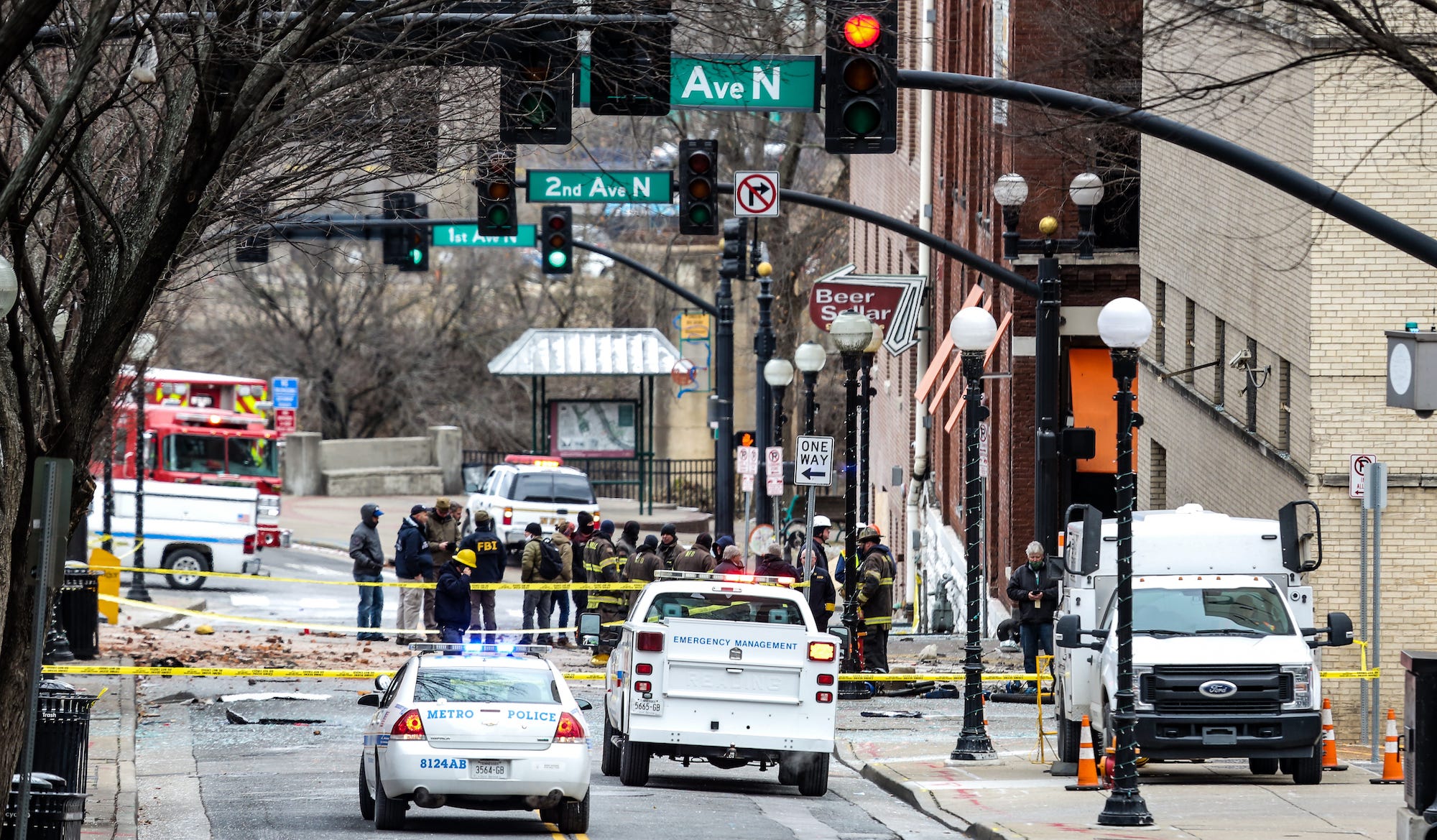 Thaddaeus McAdams/Getty ImagesFBI and first responders work on the scene after an explosion on December 25, 2020 in Nashville, Tennessee.

On Christmas morning, an RV exploded in downtown Nashville, injuring 3 people and damaging 41 buildings. Authorities say Anthony Warner, 63, was responsible for the explosion and died in what the FBI believes was a suicide bombing.

Before the bombing, Warner, whose motive has not been announced by authorities, sent packages to friends that included letters alleging that lizard people were controlling the world, according to WTVF, a local news outlet in Nashville. The packages included several typed pages about conspiracy theories as well as two USB drives, WTVF reported.

An FBI spokesperson previously confirmed to Insider in a statement, “We are aware the suspect sent materials which espoused his viewpoints to several acquaintances throughout the country.” 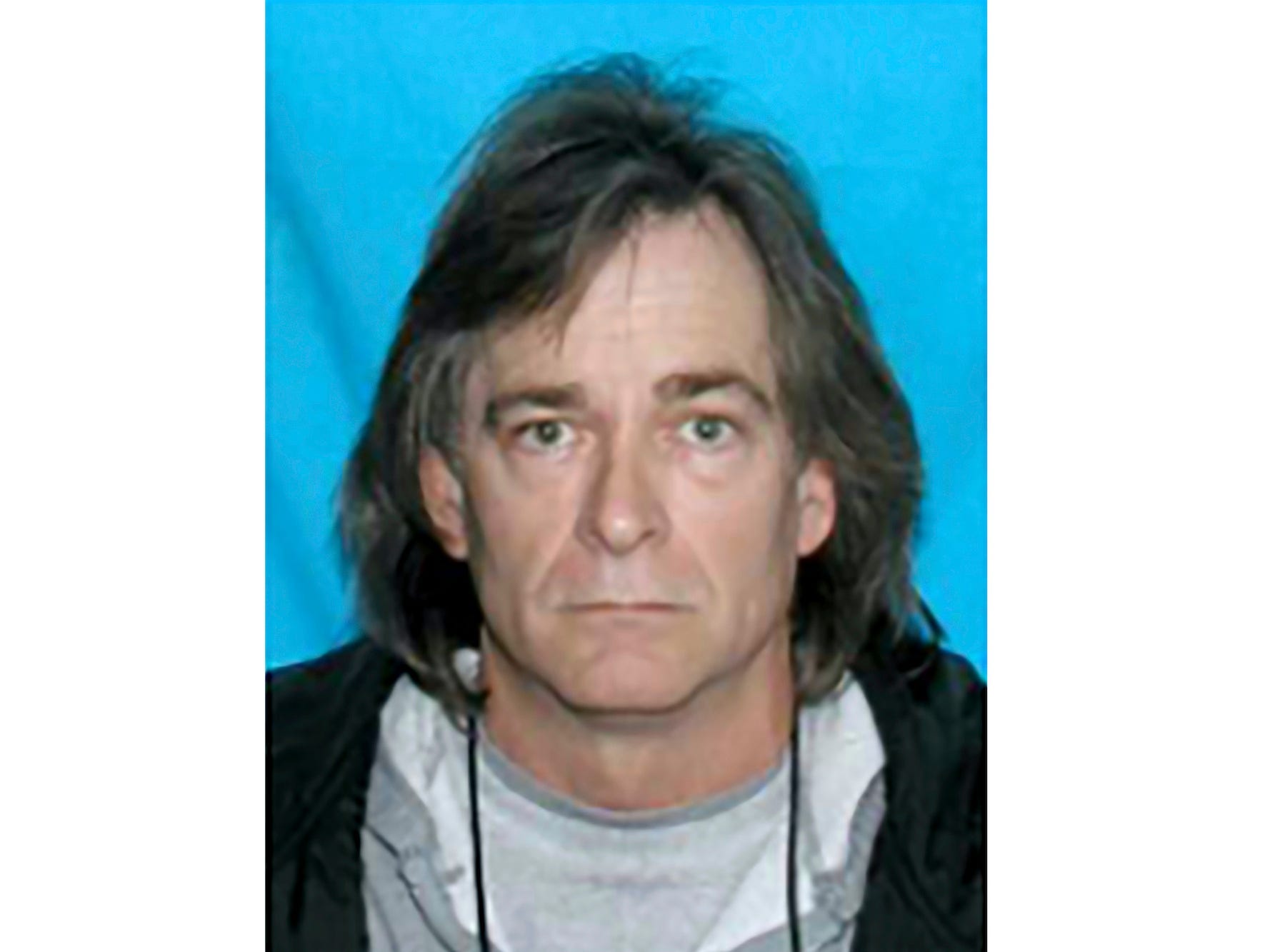 Reptilian humanoids, or humans that are part reptile, are commonly found in science fiction and fantasy writing. But the claim that lizard people control the world is a fringe conspiracy theory that was popularised in the late 1990s, and it shares qualities with the pro-Trump QAnon conspiracy theory, which was created in 2017 but has thrived in the last year.

Contemporary belief in reptilians is mostly linked to British conspiracy theorist David Icke, who first published his book “The Biggest Secret” in 1998. Icke alleged that “the same interconnecting bloodlines have controlled the planet for thousands of years,” as the book’s Amazon description says. The book suggests that blood-drinking reptilians of extraterrestrial origin had been controlling the world for centuries, and even originated the Illuminati â€” a fictitious group of world leaders that conspiracy theorists say control the world.

Icke has long been accused of anti-Semitism, as his writings on the reptilian conspiracy theory are clearly evocative of the centuries-old blood-libel conspiracy theory, which alleged that a cabal of Jews were controlling the world and drinking the blood of Christian children. He has denied being anti-Semitic, The Guardian reported in 2001. Insider sent a message to Icke via the media-request contact form on his website, but had not heard back at press time. 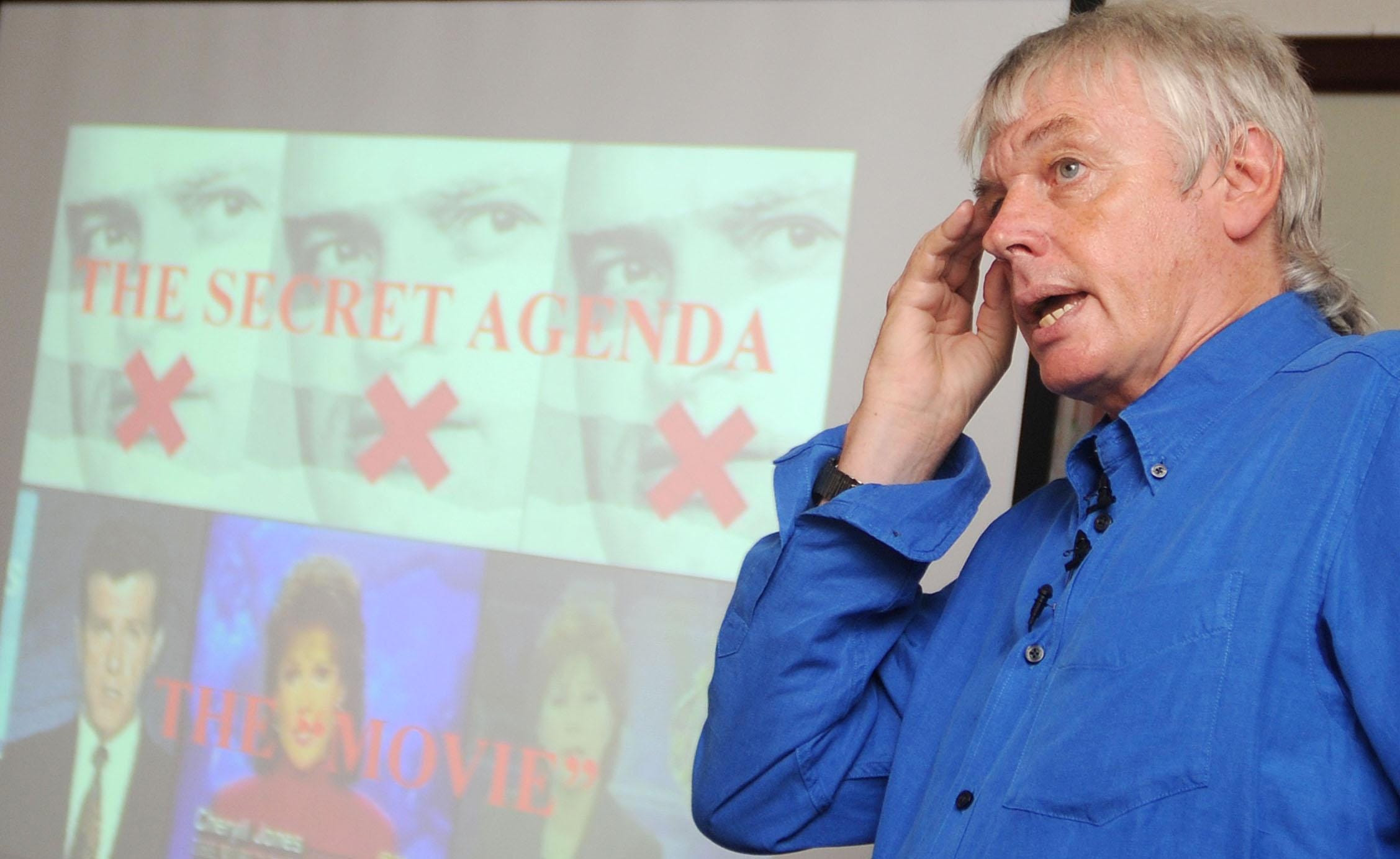 Like many conspiracy theories, this one has been popularised at various points in history. Most recently, it resurfaced when former President Barack Obama was in office. A 2013 poll about conspiracy theories conducted by Public Policy Polling, a left-leaning polling firm, found that 12 million Americans believed that “lizard people control politics,” or 4% of respondents.

A March 2013 YouTube video claiming that the president had a “Reptilian Secret Service” has been viewed more than 3 million times. YouTube affixed a label to the video that leads to a Wikipedia page about the fictional reptilian humanoids. 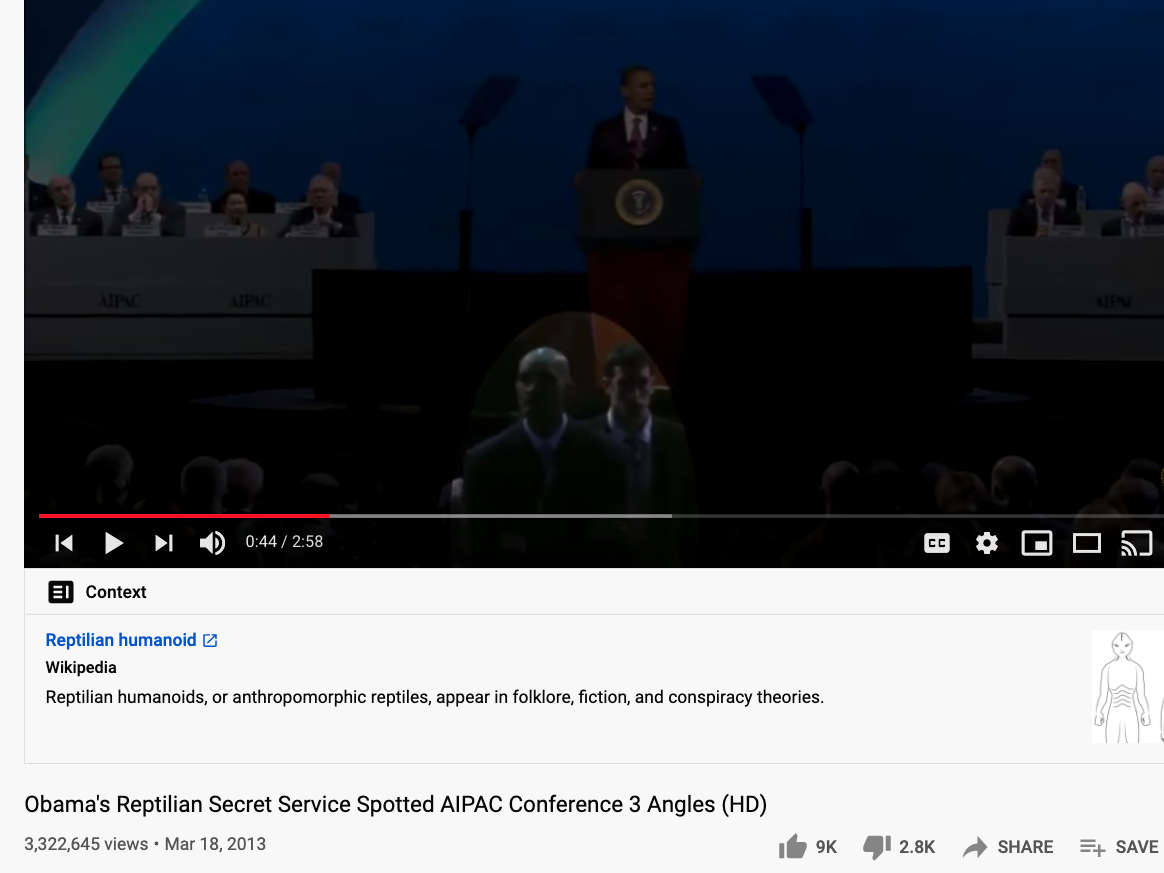 Screenshot/YouTubeA 2013 YouTube video claiming Obama was guarded by reptilians has millions of views.

Such claims have often been dismissed and responded to in jest. Caitlin Hayden, then the chief spokeswoman for the National Security Council, told Wired in 2013 that “any alleged program to guard the president with aliens or robots would likely have to be scaled back or eliminated in the sequester,” referencing a congressional plan to cut defence funding.

There is overlap between the lizard-people theory and QAnon 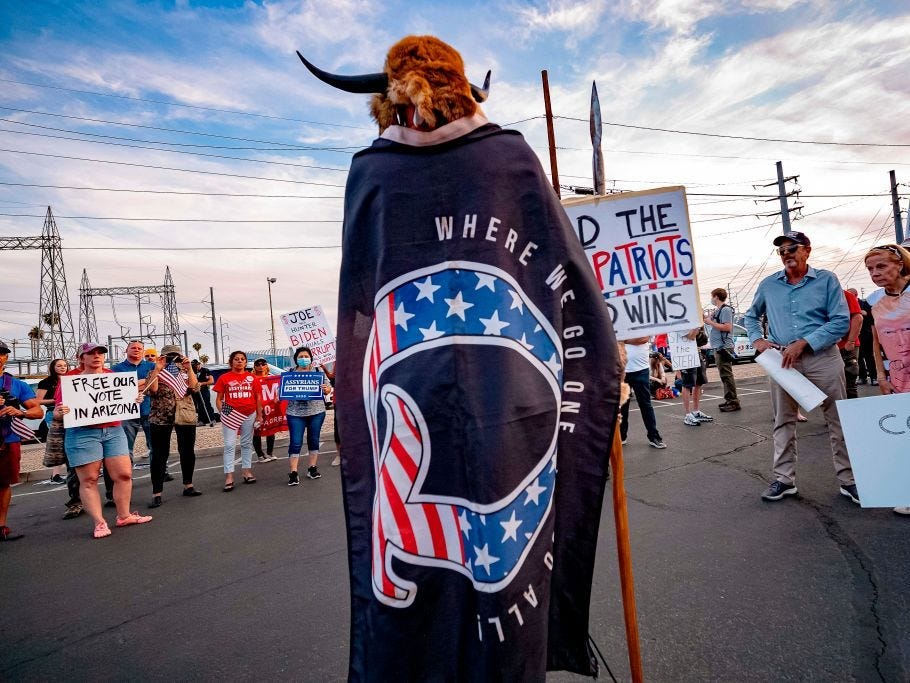 Olivier Touron/AFP via Getty ImagesJake A, 33, aka Yellowstone Wolf, from Phoenix, wrapped in a QAnon flag, addresses supporters of US President Donald Trump as they protest outside the Maricopa County Election Department as counting continues after the US presidential election in Phoenix, Arizona, on November 5, 2020.

Conspiracy theories commonly overlap with each other, and those theories “may be associated with increased radicalized and extremist behaviour,” as researchers found in the 2019 paper, “Understanding Conspiracy Theories,” published in the Advances in Political Psychology journal.

The comingling of these beliefs has also been made clear in the Nashville case, as Warner espoused conspiracy theories related to 5G cellular networks and the September 11 attacks, according to WTVF.

There is no evidence indicating that Warner believed in QAnon specifically, but the lizard-people conspiracy theory has similarities to QAnon.

Marc-AndrÃ© Argentino, a PhD candidate at Concordia University researching extremism, explained in a thread on Twitter that both theories are about theodicy, or “explaining the problem of evil.” In both the QAnon and lizard-people worldviews, the world is being “controlled by Evil blood drinking elites that are responsible for all the evil in the world.”

Argentino told Insider that the two conspiracy-theory frameworks share an important element: those accused of being evil require human suffering to survive. In the QAnon universe, elites (a group that includes Democrats, celebrities, and business-people like George Soros) are falsely believed to consume “adrenochrome,” an imaginary drug supposedly secreted by children when they’re afraid. Lizard-people believers claim that “reptilians feed off of our emotions” in the same way, Argentino said.

In most cases, QAnon believers use the existence of pedophiles and human traffickers to explain away their enemies whom they perceive as evil. For lizard-people believers, Argentino explained, “reptilians act as an explainer for the evil that has befallen them or the world.”

Like the lizard-people theory, QAnon draws on centuries-old anti-Semitic tropes.

In January 2019, a man in Seattle called 911 after fatally stabbing his brother with a 4-foot sword. “God told me he was a lizard,” he told the dispatcher, according to charging papers obtained by The Seattle Times. Wolfe was acquitted of his murder charge by reason of insanity last year, according to a King County Superior Court representative.

The Daily Beast reported that the man, Buckey Wolfe, who was 26 at the time, had also expressed a belief in QAnon and had attempted to join the Proud Boys, a far-right extremist group.

QAnon believers have been linked to several crimes, as have followers of the Proud Boys extremist group. Particularly as QAnon has been increasingly popular during the pandemic, and gained even more notoriety by spreading false claims about voter fraud in the presidential election, extremism experts have warned that the overlapping of these theories poses a real-world threat. That threat was made clear on Wednesday, when pro-Trump rioters stormed the US Capitol in Washington, DC â€” many of them supporters of the QAnon movement.