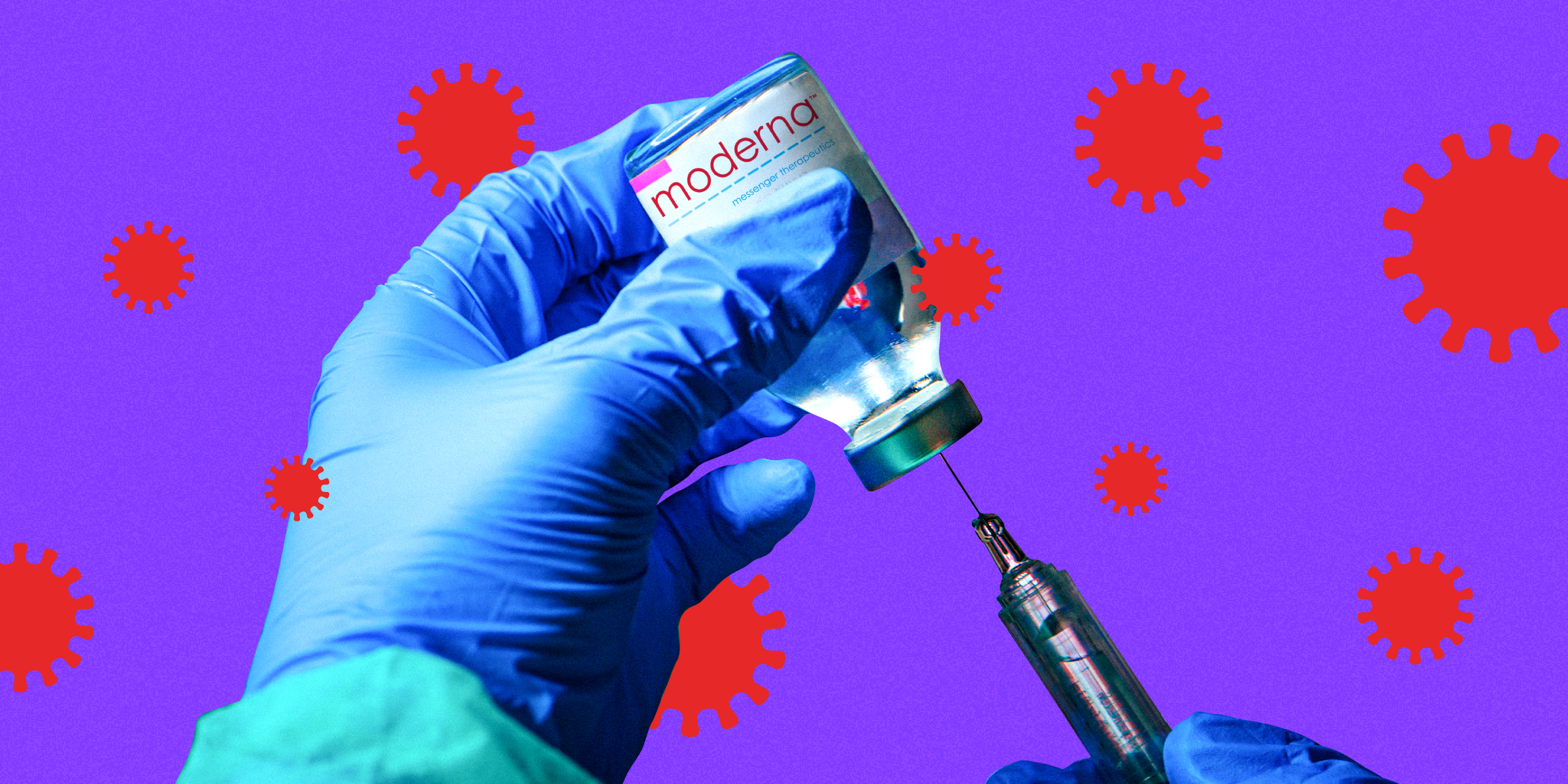 An independent panel of experts voted on Thursday to recommend that the US authorise Moderna’s coronavirus vaccine for emergency use in adults, clearing the way for an imminent regulatory OK of a second COVID-19 vaccine in the US.

Twenty of the 21 committee members voted yes, and one panelist abstained.

US Food and Drug Administration regulators are expected to grant emergency authorization to Moderna’s vaccine as soon as Friday, sources told The New York Times. If the vaccine gets the FDA’s regulatory go-ahead, the government plans to ship 5.9 million doses of Moderna’s shot to more than 3,000 sites across the country next week.

A late-stage clinical trial found the shot to be 94% effective at preventing symptomatic COVID-19. That rate is on par with Pfizer’s shot. There were no major safety concerns with the two-dose vaccine, FDA regulators said in briefing documents released Tuesday. There were also no severe cases of COVID-19 among vaccinated study participants, compared with 30 severe cases in the group who got placebo injections.

During an all-day virtual meeting Thursday, a group of leading independent experts discussed and debated the vaccine’s application for emergency-use authorization. The committee included some of the nation’s leading virologists, infectious-disease experts, and clinical researchers.

Advisory committee members and pharmaceutical representatives both stressed the urgency of the situation, saying one person who received a placebo shot died from a severe case of COVID-19 and that there were so many cases during the study period that the trial was wrapped up five months earlier than expected.

“We currently have over 450 cases that are making their way through the adjudication process,” Dr. Jacqueline Miller, an infectious-disease vaccine-development expert with Moderna, said, calling it a “tsunami” of new infections.

“Additional severe cases and deaths are a question more of when than a question of if,” she said.

Dr. Michael Kurilla, an infectious-disease expert at the National Institutes of Health, was the lone abstention on the vote. He said he abstained because the question presented to the panel was too broad.

“In the midst of a pandemic, and with limited vaccine supply available, a blanket statement for individuals 18 years and older is just too broad,” Kurilla said. “I’m not convinced that for all of those age groups the benefits actually do outweigh the risks.”

Business Insider covered the all-day meeting Thursday. Below are updates on what the panel was discussing throughout the day. 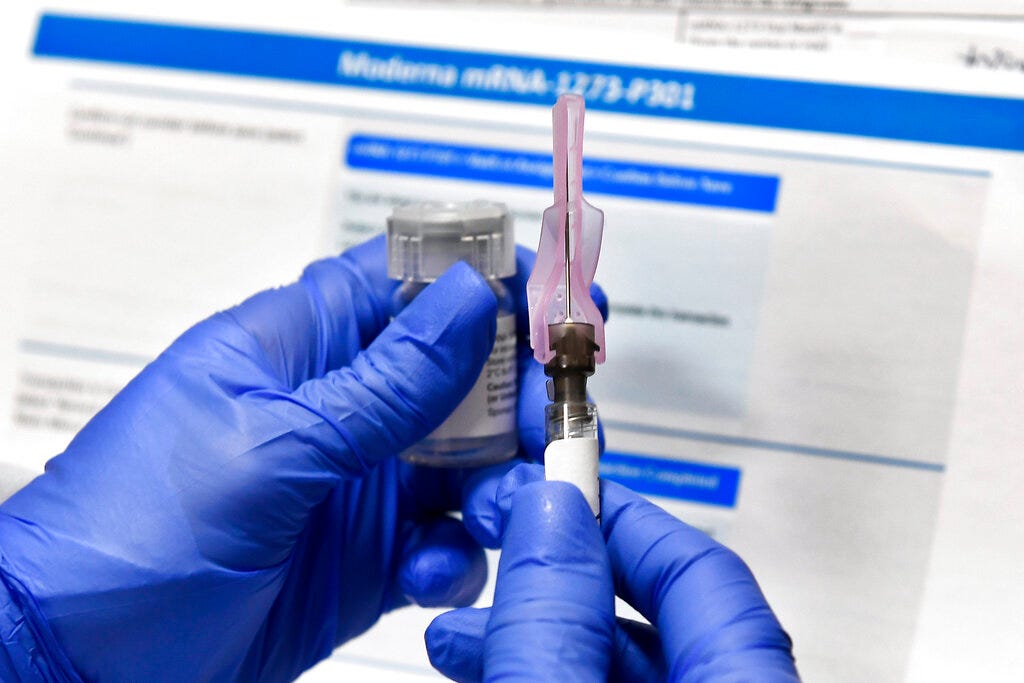 Moderna’s COVID-19 vaccine trial was designed to measure how well two shots given 28 days apart protected people from infections. And it showed the vaccination worked very well at that: It is 94% effective at preventing symptomatic COVID-19 14 days after a second shot.

But it’s possible that good protection from infection starts much sooner than that.

Preliminary trial data suggests the first dose of Moderna’s vaccine likely provides a decent measure of protection from infection all on its own.

Researchers found fewer COVID-19 cases among people who got Moderna’s shot compared with the placebo group after volunteers got their first injection, but before they got the second dose. That protection appeared to ramp up over time, generally kicking in a couple weeks after the initial shot.

“This could suggest some protection after the first dose, but data is limited by the very short follow-up, around 28 days, as the majority of the study subjects received a second dose,” Dr. Rachel Zhang, an FDA medical officer, said.

The Evercore ISI biotech analyst Umer Raffat also pointed out how well Moderna’s first dose might work on its own in a recent research note to investors. Data suggested the first dose was about 92% effective compared with a placebo in regard to first COVID-19 occurrences starting two weeks after the first dose, Raffat said.

It’s still unclear how protective one dose would be in the long run without a second shot. But Raffat – along with a handful of thought leaders in the drug industry, like Scott Gottlieb, a Pfizer board member and the former FDA head, and the University of Pittsburgh researcher Walid Gellad – has said the potential benefits after one dose should be considered, especially given the state of the pandemic.

Dr. James Hildreth, an immunologist on the committee and esteemed HIV researcher, also suggested that since so many people in the US already had COVID-19, they might receive ample benefits from just one dose of Moderna’s vaccine.

“There are probably tens of millions of Americans who’ve already been infected,” Hildreth said Thursday during the meeting. “What I’m asking is, if you took the ones who have been infected and gave them an injection of your vaccine, could that possibly serve as a boost?”

Moderna’s Miller said that as more study data became available in the weeks and months ahead, that could be something to look into.

Operation Warp Speed is holding back half the available doses to ensure each vaccine recipient gets their booster dose at the right time – after three weeks for Pfizer’s shot and after four weeks for Moderna’s.

Gottlieb and Gellad have said it would be better to distribute all the doses right away, getting a first dose to twice as many people. While this opens up a risk that there may not be enough supply for everyone to get their booster shots on time, they said this could be an acceptable risk to take during the most deadly period of the pandemic.

2:45 p.m.: One panelist inquires about above-average Bell’s palsy rates, but the numbers are too small to draw conclusions from

Dr. Paul Offit, a committee member and vaccine expert at the University of Pennsylvania, highlighted that both Moderna’s and Pfizer’s vaccine studies appeared to have higher rates than usual of Bell’s palsy.

Bell’s palsy is a typically temporary condition marked by weakness or paralysis in facial muscles. FDA scientists have acknowledged that more people who received the coronavirus vaccines developed this condition than those who got a placebo.

But the number of cases – seven among more than 30,000 vaccinated volunteers – is too small to say if the vaccine caused these cases. Agency reviewers said the Bell’s palsy cases in the studies were in line with typical incidence rates.

Offit also said it was important to not fall victim to “the tyranny of small numbers” and conclude a relationship just yet, saying he was pleased the agency would closely monitor these vaccines going forward.

But Offit questioned the notion that the studies had typical rates of Bell’s palsy cases.

“I’m just not quite sure how we are so comfortable that this was a background rate,” he said.

Offit said the volunteers from those two placebo groups combined had about 1.2 cases per 10,000 per year. He said that was roughly in line with the background rate.

The FDA’s Zhang said the agency was looking into this.

“There is still no clear basis upon which to conclude a causal relationship, but we definitely see your point with the two studies combined,” she said.

She did not dispute Offit’s point that the vaccinated groups seemed to have higher-than-normal rates of Bell’s palsy.

Moderna has a plan to offer trial volunteers who received placebo shots the actual vaccine, while sidestepping some of the key ethical concerns.

What to do with ongoing placebo-controlled trials during the pandemic has become a top conundrum facing vaccine developers such as Pfizer and Moderna. On one hand, researchers want to keep following the placebo group to have high-quality long-term data to see how these shots work. But ethicists also wonder if studies can, or should, withhold an effective vaccine from volunteers.

Tal Zaks, Moderna’s chief medical officer, said this would not take doses away from priority groups. Instead, placebo recipients would get doses already produced for the sole purpose of clinical-trial use that couldn’t be dispatched to the general public.

“None of our vaccine-trial participants would be ‘jumping the line’ ahead of others because we have clinical-trial supplies available that would, in fact, expire and go to waste if we don’t use them,” Zaks told the panel.

Dr. Lindsey Baden, an infectious-disease expert at Brigham and Women’s Hospital, also spoke as part of Moderna’s presentation as one of the study’s investigators.

Baden said there had been a “substantial” number of volunteers dropping out of the trial in the past week since Pfizer’s vaccine secured an emergency OK on Friday.

“This dropout undermines the data integrity and what can be learned,” Baden said. “We must be proactive to ensure that the best choice is for our participants to remain in the study.”

Giving placebo recipients the chance to be vaccinated is important because many of the volunteers are at higher risk of infection and have risk factors for severe disease, Zaks said.

A 54-year-old man with diabetes who got placebo shots in Moderna’s trial ultimately died from COVID-19, Zaks said, which highlights the risk in not immunizing these volunteers.

9:50 a.m.: The FDA and CDC are investigating allergic reactions to Pfizer’s vaccine but have no answers or recommendations yet 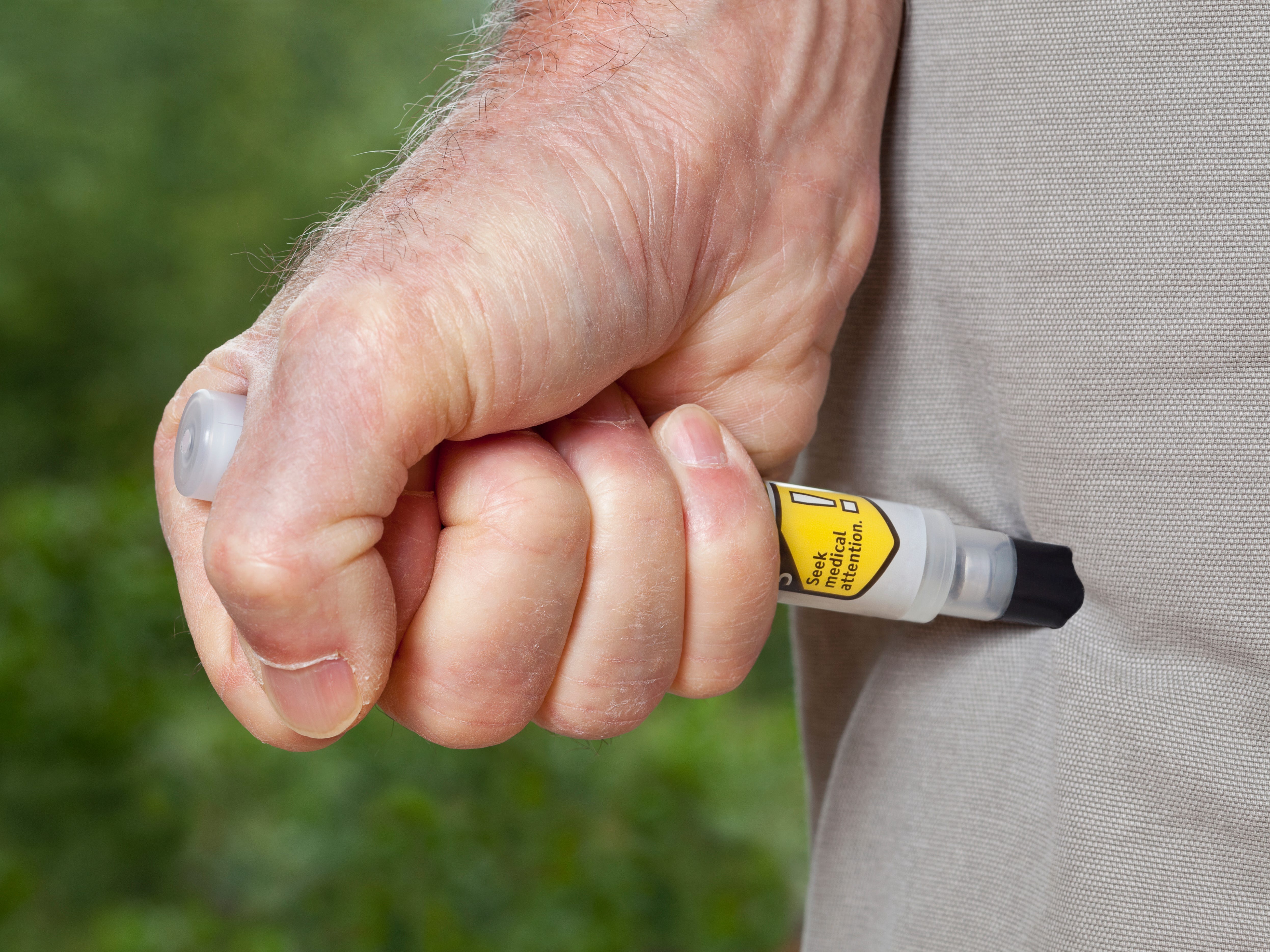 GettyAn EpiPen can be used in an emergency to treat anaphylactic shock by injecting epinephrine through clothing.

Dr. Stanley Perlman, a University of Iowa immunologist, asked about explanations for allergic reactions to COVID-19 vaccines, since two healthcare workers in the UK, and then two more in Alaska, had anaphylactic reactions after receiving Pfizer’s vaccine.

Pfizer’s vaccine ingredients don’t seem to be anything highly allergenic, and at least one of the healthcare workers had no history of allergies, leaving experts puzzled about what happened.

“At this point we and CDC are continuing to investigate cases and consider data,” Doran Fink, an FDA vaccine expert, said. “At this point, we don’t have enough information to make definitive recommendations one way or another, and as we continue to investigate and evaluate the data we will consider whether additional recommendations need to be made.” 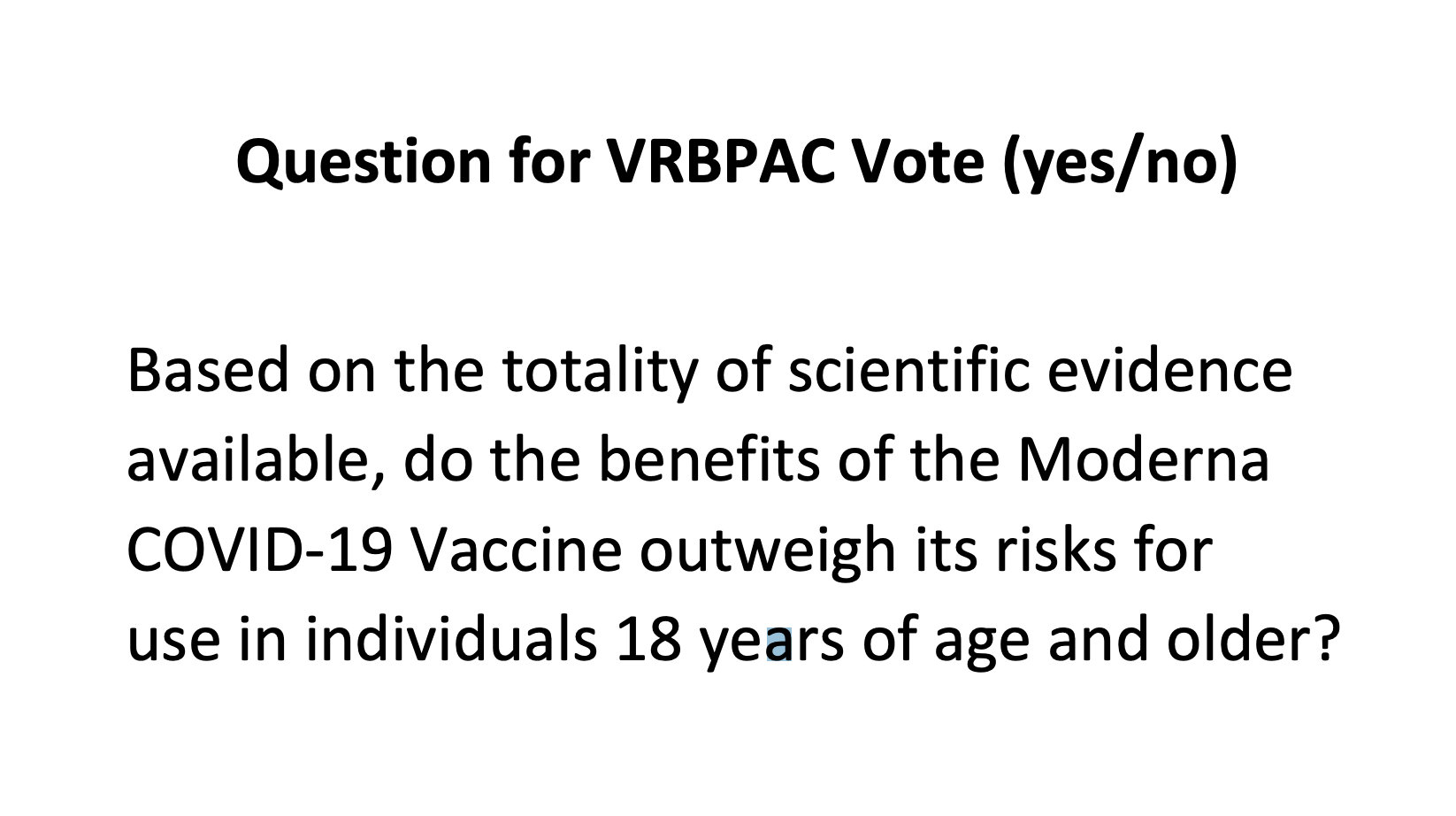 We are off and running for a marathon meeting expected to wrap up at 5:15 p.m.

On Tuesday, the FDA released the most detailed results yet from Moderna’s late-stage study in preparation for this meeting. The agency’s summary showed the two-dose vaccine to be overwhelmingly protective at preventing symptomatic COVID-19 with no major safety concerns.

All in all, it’s a very similar profile to Pfizer’s vaccine, which was authorised on Friday, and we compared what we know about each shot here.

It’s poised to be a long but important day. The panel’s recommendation on whether to OK Moderna’s vaccine is seen as the last remaining barrier to an FDA authorization decision.

Here’s the agenda for the day:

10:05 a.m. – The Stanford researcher Steven Goodman discusses the options for ongoing placebo-controlled vaccine trials, given COVID-19 shots are now being rolled out