Photos show what life is like in a Siberian diamond mining town on the edge of the Arctic Circle, which is home to 40,000 people and where the sun is up for 20 hours a day in the summer Alexander RyuminTASS via Getty ImageMirny is a city of about 40,000 people in northeastern Siberia.

Deep in Siberia, about 280 miles from the Arctic Circle, is a town that’s been called a “mono-city” because so much of the population works for a single company. That company is Alrosa, the world’s largest diamond miner by volume.

Mirny is a town of about 40,000 people that’s home to Alrosa’s headquarters and close to several of its diamond mines.

Diana Petrenko, an Alrosa spokesperson who referred to Mirny as a mono-city, said the company doesn’t release the exact number of its employees that are based in Mirny. But Petrenko did confirm that most of Alrosa’s 35,000 employees are based in Yakutia, the region where Mirny is located. In 2011, the BBC estimated that about 70% of the population worked for the diamond company.

Last summer, I travelled to Russia and spent three days in Mirny. Here’s what the town looks like.

Mirny is a Russian town located deep in northeastern Siberia, about 280 miles (450 kilometers) from the Arctic Circle. 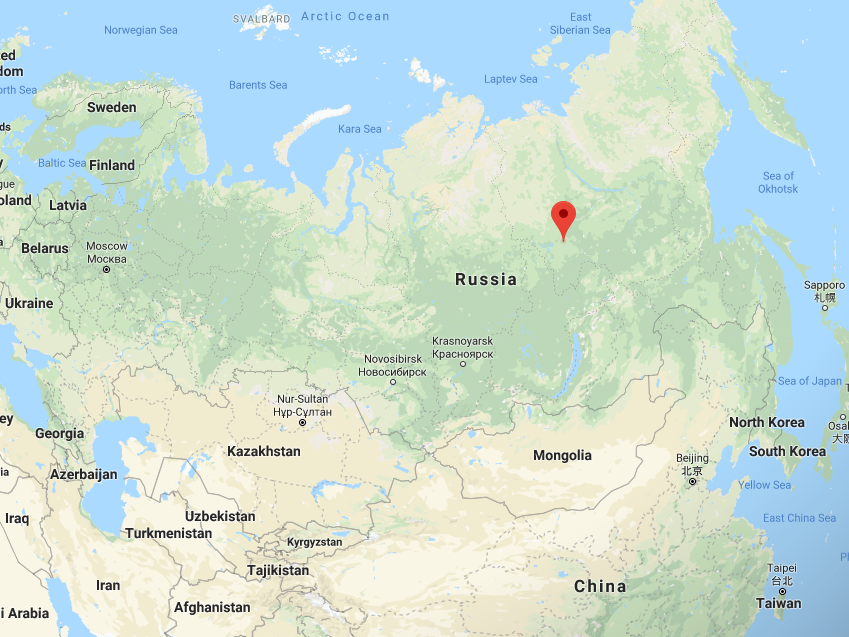 It’s part of the federal Republic of Sakha, also known as Yakutia, which is the largest republic in Russia, according to Brittanica.

The Sakha Republic is known for its extreme climate. The average temperature in January is -46 degrees Fahrenheit (-43.5 degrees Celsius). Underlying the entire region is a thick layer of permafrost. It reaches450 feet, or 140 meters, deep in the capital of Yakutsk.

Mirny has been a diamond mining town since the 1950s. 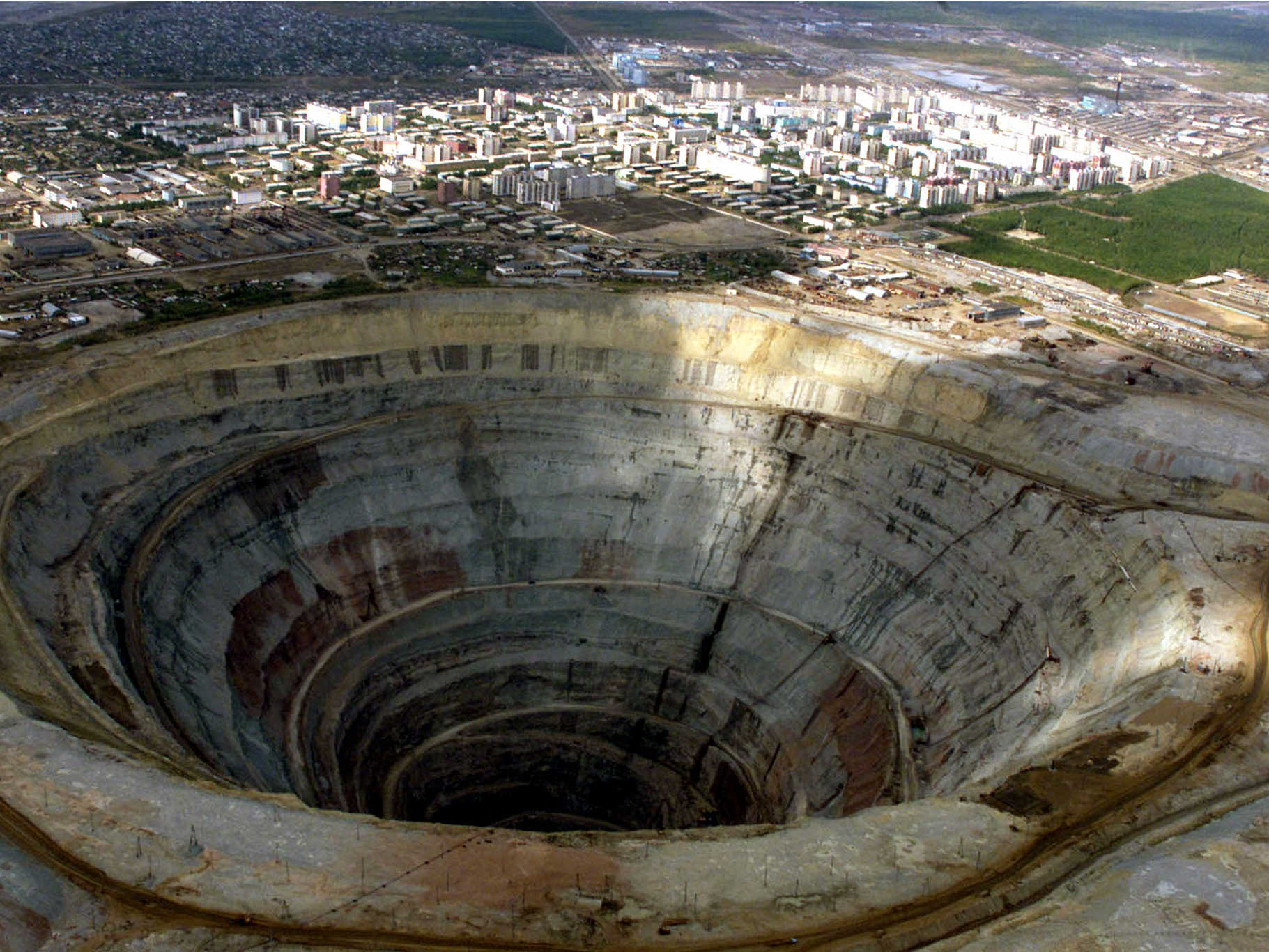 Reuters/Sergei KarpukhinMirny and the Mir mine.

It’s the headquarters of Alrosa, the world’s largest diamond miner by volume, as well as one of the largest manmade open pits in the world, the Mir mine.

The Mir mine is the second-largest manmade pit in the world. Mir is one of two main mines in the town of Mirny itself, the other being an underground mine called International.

On a trip to Russia last summer, I travelled to Yakutia to spend three days in Mirny. I was guided by employees from Alrosa, including Diana Petrenko, who served as guide and translator in a region where few people speak English.

I flew to Mirny from Moscow. It was a five-and-a-half-hour journey — about the time it takes to fly from New York City to Los Angeles. The Mirny airport is an important hub for the diamond mining activity in the area, Petrenko told me. The diamond company’s own airline, Alrosa Air, operates out of the airport.

The Mirny airport was one of the smallest I’ve ever been in. Many of its flights were going between Moscow, Krasnodar, and Novosibirsk, the largest city in Siberia.

When I left Mirny to fly to Novosibirsk, I had to wait in line for about 30 minutes to check my bag. But after that, it took me less than 30 seconds to pass through security. There was no line, and I didn’t have to take off my shoes or take out any liquids or electronics. I just set my carry-on bag on the conveyor belt and walked through the full-body scanner.

Mirny has been called a “mono-city” because most of its 40,000 residents work in the diamond industry. Alrosa doesn’t keep count of its employees by where they’re based, but most of Alrosa’s 35,000 employees are based in Yakutia, the region where Mirny is located, Petrenko said.

As only two of Alrosa’s diamond mines are within driving distance of Mirny, many miners get on a plane to go to work for a two-week shift in the mine. The 25-seat planes fly to the mine every day. To get to Alrosa’s Nakyn ore field, for example, is about an hour’s flight.

But not all of Alrosa’s employees are miners. Other Alrosa employees in Mirny include office workers and those who work in the diamond sorting centres.

Although I mostly saw families in Mirny, I did see a few people who appeared to be in their 20s. Some may have been students at the Mirny Polytechnic Institute, a branch of Russia’s North-Eastern Federal University, where students can prepare for future careers in the diamond industry. Majors include Underground Mining of Mineral Deposits, Electrical Engineering and Automation in Mining, and Mining Machines and Equipment.

Buildings in Mirny are built elevated above the ground because it isn’t feasible to dig into the permafrost. A gap is left between the house and the ground so the house doesn’t get too cold, I was told.

When I visited in June, Mirny had about 20 hours of daylight each day. This time of year is called “White Nights” because it barely gets dark. When I was in Mirny, the sun set at about 11:25 p.m. and rose before 3:30 a.m, but it never got completely dark.

As a traveller, it was fascinating and disorienting – but even those who permanently live in Mirny struggle with the long hours of daylight. An Alrosa employee who moved to Mirny from another town in Yakutia told me she can sometimes only sleep three to four hours a night during this period.

“Locals that were born here take it easier but also use blackout curtains and eye masks,” she said. “That’s the main life hack – make it as dark as possible when you go to sleep.”

In my hotel room, the curtains did little to block out the bright sunlight. Katie Warren/Business InsiderA photo of my hotel room at the Azimut Hotel in Mirny at about 9:30 a.m.

It didn’t help that the room was also unbearably hot, which I hadn’t expected from Siberia.

The sun started to set around 11:00 p.m., but it never really seemed to get dark. Katie Warren/Business InsiderA view of Mirny at 11:15 p.m. in June.

I kept jumping up in a panic every hour or so, thinking I’d overslept. According to Booking.com, the only hotel in Mirny is the Azimut, where I stayed. I paid $US88 per night for my room, and that included breakfast. Mirny does have some vacation rentals, most of which seem to be under $US100 per night for an entire apartment.

Mirny has a handful of restaurants, ranging from traditional Yakutian cuisine to pizza, Thai, and sushi. In Mirny, an average lunch at a restaurant costs less than 500 rubles, or about $US7.80, according to Alrosa. Those who work in the diamond mines, however, can eat in the staff canteen for 200 rubles, or a little over $US3.00.

Typical meats eaten in Yakutia include beef, reindeer, bear, and horse, and sliced frozen fish is a popular dish.

Mirny has a diamond mining museum and a sports centre, but I didn’t notice much else in the way of cultural activities or entertainment. Danil Solovev, a local diamond miner, described the town as very calm and quiet, comfortable for families, and a place where people are usually either at work or at home.

I did see some playgrounds and quite a few children in town. Mirny displays its diamond mining heritage in the form of sculptures. This one portrays pioneers of the diamond industry in Mirny, one riding a reindeer. Built in 2005, the memorial was meant to mark the 50th anniversary of the diamond industry in Mirny.

I also saw a sculpture of a woolly mammoth, the Ice Age creatures that once roamed Yakutia. 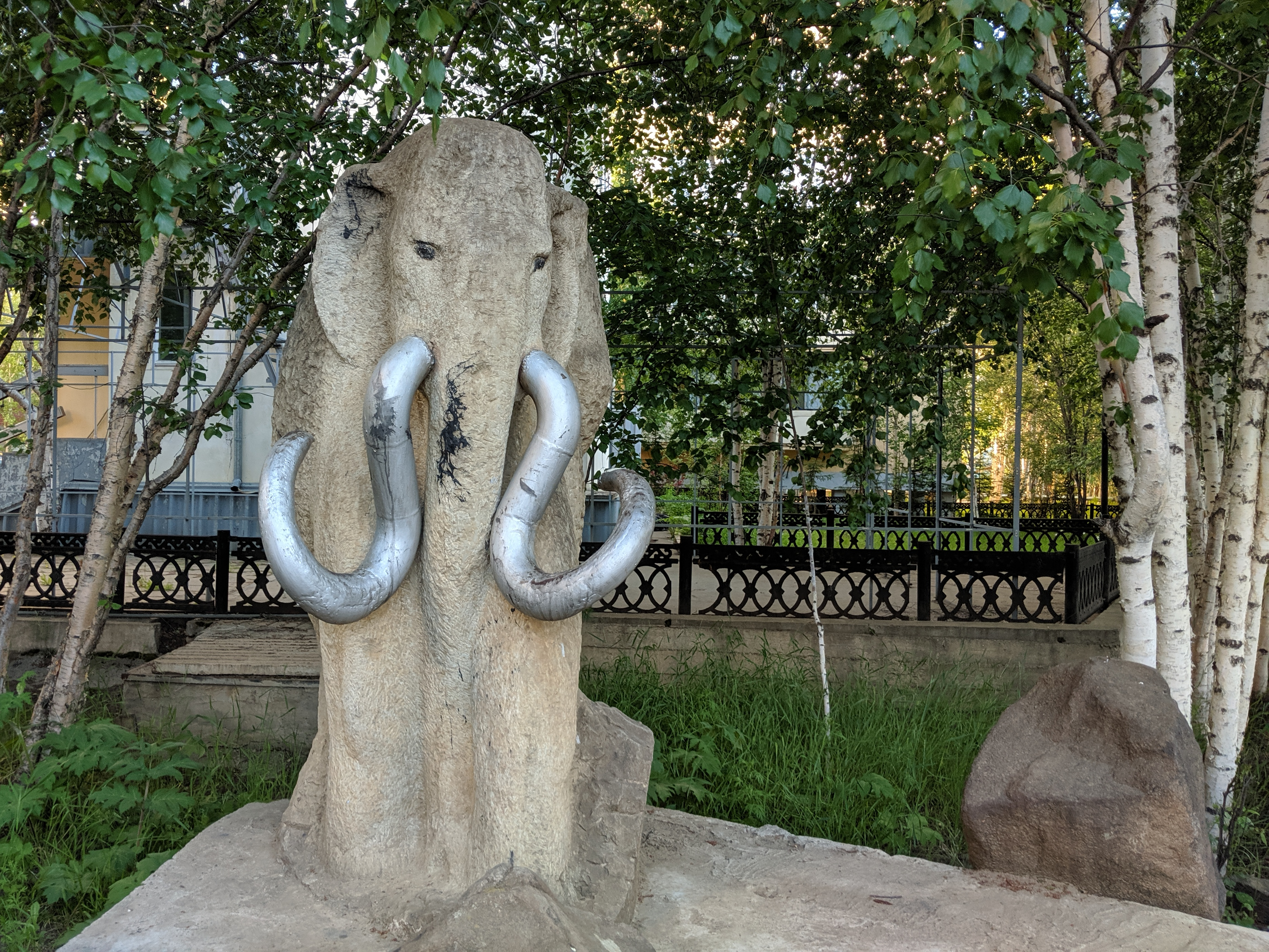 Mirny is surrounded by forests, rivers, and lakes. The Sakha Republic is home to some indigenous, nomadic people who survive by herding reindeer, hunting squirrels and foxes, and fishing.

Growing up with an image in my mind of a perpetually frigid Siberia, I was surprised by how warm it was in Mirny. It got well above 70 degrees Fahrenheit every day I was there, and if I hadn’t worn sunscreen, I would have gotten burned. Although Siberia is known for its bone-chilling winter temperatures, the average high temperature in Yakutia in June is 73 degrees Fahrenheit.

As Mirny is the centre of Russia’s diamond industry, I was surprised to see that much of the infrastructure appeared quite old. Many of the buildings and some of the cars made me feel like I’d travelled back in time to the 1950s or ’60s.

Despite my trouble sleeping in bright sunlight and the occasional biting fly, spending a few days in Mirny offered a fascinating look at a Siberian mono-city shaped by Russia’s massive diamond industry.