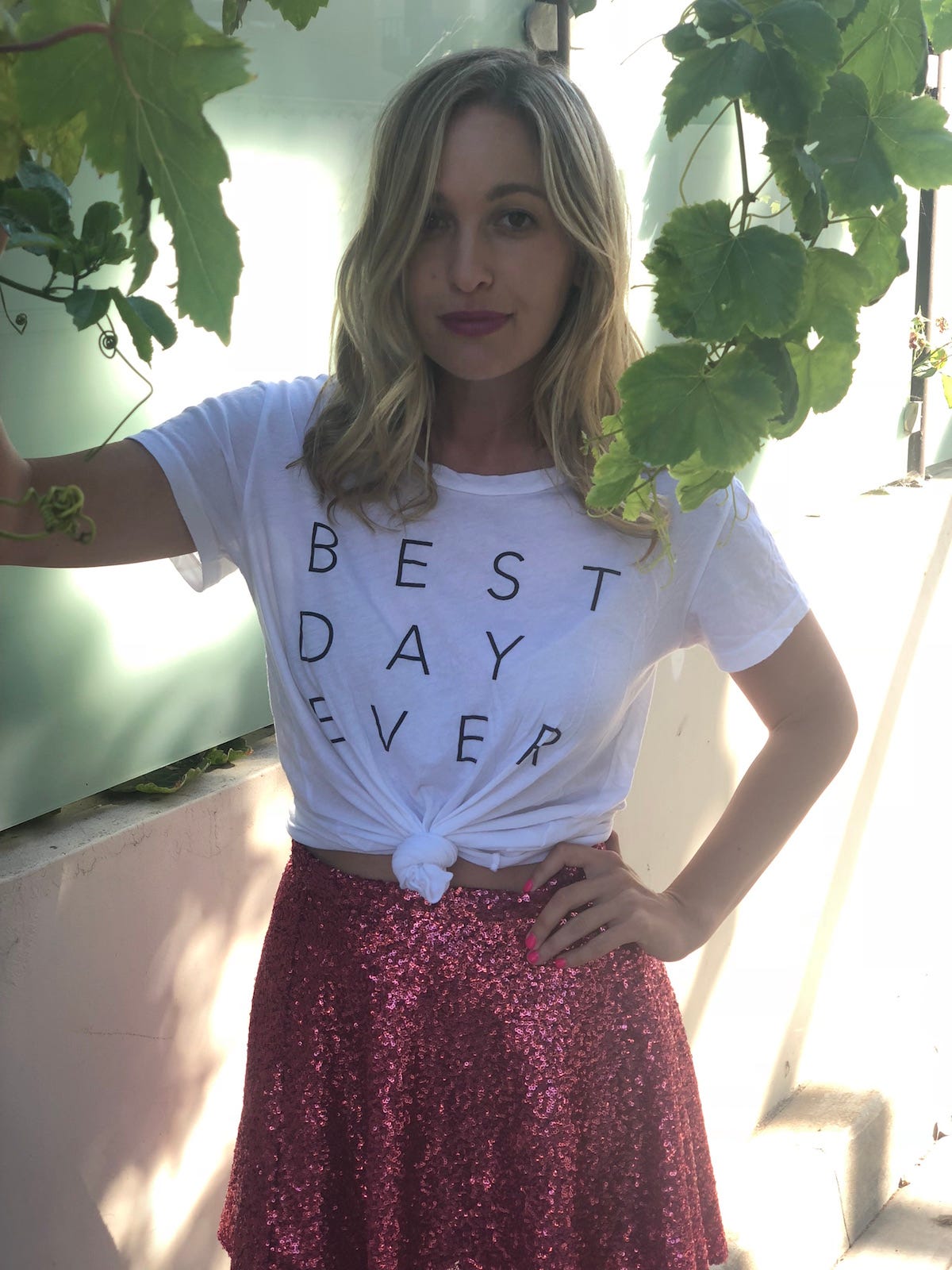 I used to be so shy that when someone asked me my name, I’d turn bright red and look for the nearest exit door.

Over the years, through lots of public speaking practice, I’ve been able to own the room when I have to give a presentation or pitch a new project. But when it comes to making new friends or being the life of a party, I always feel too overwhelmed to bring the most confident version of myself.

I get stuck in my head. What if I say the wrong thing? What if the person doesn’t like me? What if they think I’m too much? It becomes impossible to enjoy my time in a conversation with a new person or a group of people because I overthink the whole interaction.

At the end of 2019, I decided enough was enough and reached out to Danielle Bayard Jackson, a certified women’s coach who focuses on friendships, in an effort to put an end to my social awkward tendencies.

“Feeling socially awkward means you feel especially inadequate in social situations,” Jackson told me. “It means you don’t feel confident in your skills and being overly mindful.”

I wanted to spend 2020 making real connections with people in any environment I found myself in (this was way before I knew most of them would happen virtually), so Jackson gave me a few techniques to try.

Here’s what happened when I followed her 5 pieces of advice in social situations over the course of a few weeks.

1. Grab a partner in crime

I felt extra stressed out about social situations when I was going to a place where I wouldn’t know anyone. How would I enter conversations? Would people want to include me? Now in my thirties, I often reverted back to the insecurities I had when I was in middle school and was often excluded from lunchroom tables or sleepover parties.

One technique Jackson recommended was having a partner in crime to come with me, when possible.

“Sometimes that will soften your awkwardness because you’ll have someone there to absorb the interactions that will take place,” she said. “You might not be able to have someone to go with you to every social situation but if you have a particular one where you know you’ll feel on edge, it could be helpful to have someone by your side.”

I tried this for a party I was invited to from an acquaintance I met in a Facebook group. I agreed to go to a party they were hosting at a local event space and asked a good friend to come along.

It helped ease the tension of walking into the room, and allowed me to feel more confident engaging in conversations. By the middle of the night, we actually split up and found ourselves talking to different groups of people.

However, Dr. John Allen, MD, a licensed psychologist and medical director of San Diego-based rehab centre Healthy Life Recovery, said that while having a friend tag along is one useful method to help quell fear and anxiety, it shouldn’t be a crutch I lean on.

“You should also make a concerted effort to develop new psychosocial skills, as these are the abilities that will enable you to deal effectively with the demands and challenges of everyday life,” he advised. 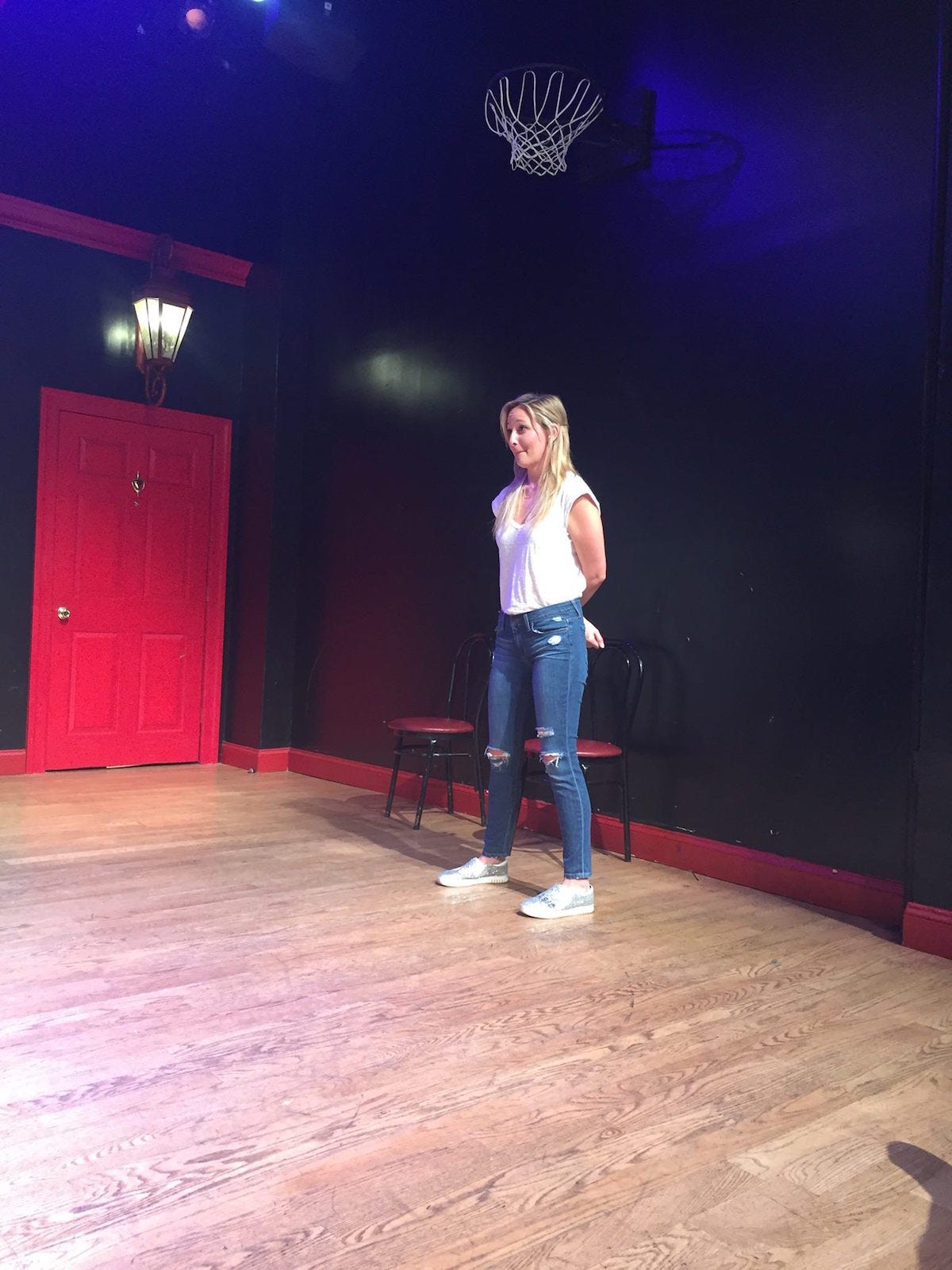 Adam KossoffI took an Improv class in New York City to help with being socially awkward.

When I realised I spend too much time judging myself and not enough time zeroing in on the conversation, Jackson suggested taking an improv class to toss me out of my comfort zone and get me to stop overthinking.

“A lot of times in social situations, people who are awkward are operating with a double mindedness because you are functioning and talking and moving, but then there’s the ‘you’ that’s looking from above overreacting about how you speak and move and you’re in your head,” she said.

“The whole point of improv is that you have to follow the rules of thinking on your feet. You don’t have time to be in your head and after one thing happens you have to make up the next thing that happens and there’s no wrong answer.”

I enrolled in an 10-week improv class and found it to be one of the most challenging things I’d ever done. Thinking on my toes and responding fast was something that gave me so much anxiety at first, but the class taught me to listen better and stop judging my every move. Whenever someone made a mistake or said something too silly, the whole class cheered. It made me realise not everyone communicates perfectly.

The one-time course wasn’t enough, though, and is something I’d like to do every year.

3. Script as much as you can 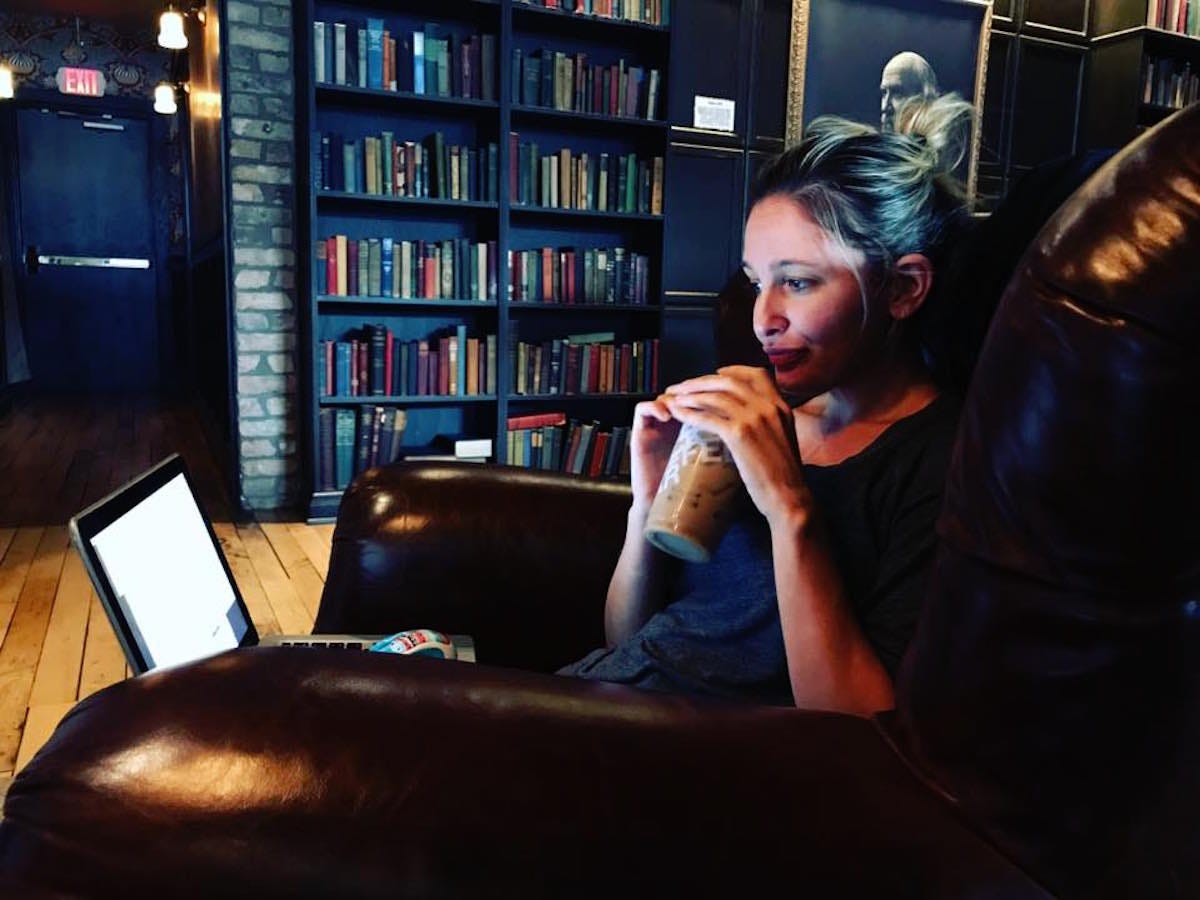 Jen GlantzI prepared for a Zoom happy hour by writing down a list of questions I’d likely be asked.

A big reason why I dread social or networking events is because I’m not great at answering questions about myself. This is why Jackson recommends having a game plan for how to approach certain topics, questions, or parts of the conversation you know you’re going to find yourself engaging in.

“You don’t want to have a notecard of things to say because you’ll sound robotic,” she said. “But there are a lot of parts of our social exchanges that are repetitive and predictable. You know there will be a greeting and questions about day or weekend, and you’ll have to eventually exit. Those are staples of basic conversations and we can minimise awkwardness by anticipating a couple of those questions or moments.”

Allen added that when we prepare for conversations and social encounters ahead of time, we can effectively tame visceral bodily responses.

“If you know what you’re going to discuss beforehand, there’s a much lower likelihood your body will perceive the encounter as a potential threat,” he said.

I took this advice preparing for a Zoom happy hour with old coworkers who I hadn’t spoken to in over two years. I wrote down a list of questions they’d most likely ask (what current projects am I working on, what I’ve been up to during quarantine, and more), and thought through my answers.

I didn’t write down word-for-word what I was going to say, but I at least put in the time to have a good sense of what I’d share and what I’d leave out. It made me feel more prepared for the social interaction and allowed me to stay more present in the conversation because I didn’t have to formulate my answers while other people were talking.

Along with having prepared answers to key questions, Jackson also suggested being ready to ask the person you’re speaking with a lot of different questions.

“Let people talk about themselves,” she said. “Encourage it and ask questions. It will take pressure off you and allow you to inquire about others because the number one thing people like to talk about is themselves.”

During a video conference call with a friend the other night, I made sure to take a break from rambling about myself and ask her questions that I thought about before. This made me feel better about the conversation because I didn’t fill awkward silences with long stories about my life, and took the time to really ask her about things that I otherwise might have been too anxious to remember to bring up.

Allen advises taking intermittent breaks while socialising by allowing others to talk about themselves, giving you time to pause and examine how you’re feeling, limiting the time you feel you’re being watched or judged, and enabling you to recenter yourself before engaging in more conversation. 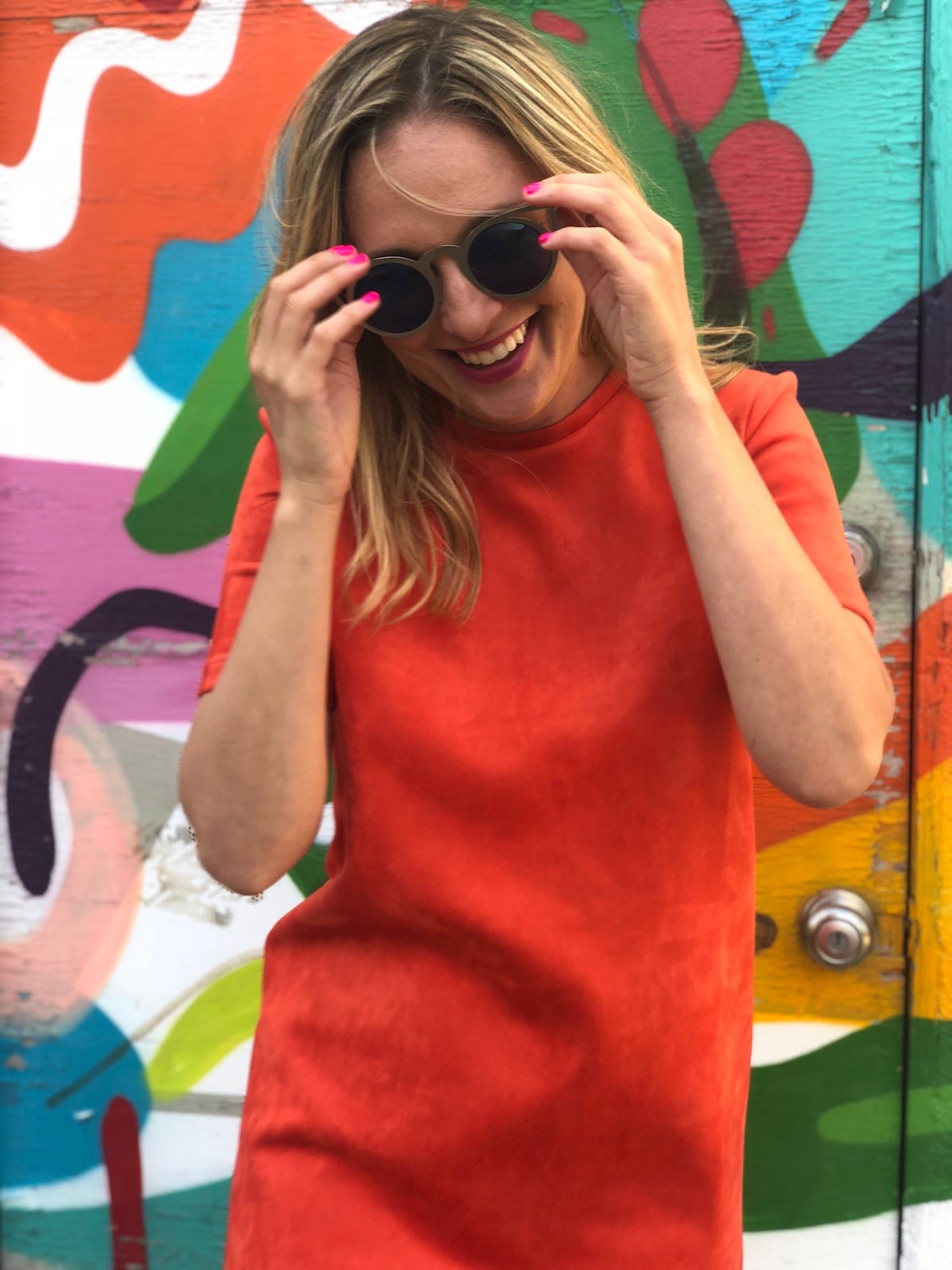 Adam KossoffI realised no one is judging me as much as I think they are.

Perhaps the trickiest thing to do, but something Jackson said would help immensely, is to fight off negative thoughts.

“A lot of social awkwardness is thinking ‘why did I just say that?’ but remember, people don’t care as much as you think they do,” Jackson said. “We think everything we do is being observed and analysed by others, but they aren’t focused on you, they are focused on them. Be yourself without so much second guessing.”

Allen agreed that managing pervasive negative thoughts is a helpful thing to do since self-limiting beliefs typically originate in the unconscious mind, and are not always easily identifiable.

However, it can be hard to remember that in real-time, so before the last party I went to, I took a walk around the block before going inside and gave myself a Jackson-inspired pep-talk. I reminded myself that I’m prepared to talk about myself, ask valuable questions, listen without having to react so quickly, and realise no one is judging me as much as I think.

It took a few minutes for me to feel comfortable and calm, but I could tell that my social awkwardness didn’t show up at the party with me like it usually does.

Using these tips made me feel confident, and will be gentle reminders in the future whenever I start to doubt myself.

I’m extremely introverted, but I challenged myself to be more outgoing for a week, and it made me feel more confident