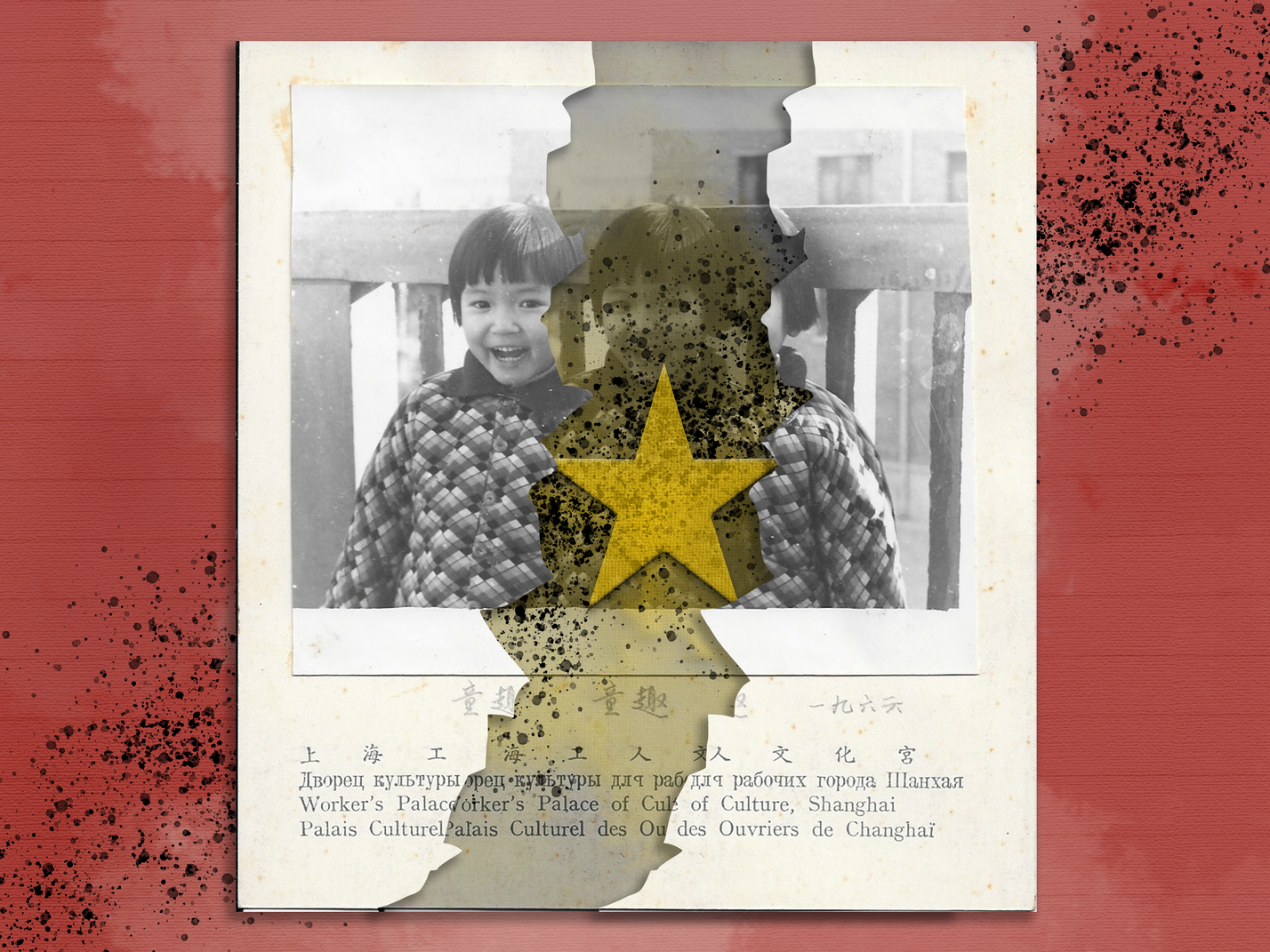 Illustration by Irene JiangJingyu, age four, poses on the balcony of her Beijing apartment.

Before the pandemic hit last year, I was doing better than ever. I’d moved to an exciting new city and snagged a dream job, a vibrant social circle, a “Friends”-calibre roommate situation, and a new relationship. For the first time in my life, everything was going great.

Then March 2020 happened, and my sprawling urban life was confined to my 100-square-foot Brooklyn bedroom. Fear became a constant, heavy shadow. It felt like I was living a neverending worst-case scenario.

I was far from alone. Over 40% of Americans suffered from at least one mental health condition as a result of the pandemic, and signs of depression in the US have tripled since the pandemic began.

But the thing about neverending worst-case scenarios is that they end. I learned that from someone with singular authority on the subject: my mother, Jingyu. During the Cultural Revolution, her mother, a professor, was found guilty of anti-revolutionary thought and sentenced to re-education through hard labour. When she was six years old, my mother and her parents were taken from Beijing to a labour camp in the countryside.

In China and its diaspora, the concept of bitterness features prominently. Working hard is “enduring bitterness,” or “xin ku,” and going through hardship is “chi ku,” or eating bitterness. Being “xin ku” or being able to “chi ku” is a source of pride. It’s a badge of strength and resilience, skills we all need to build to get through our own neverending worst-case scenarios.

The pandemic has felt like the end of the world to many of us. But people have survived indefinite periods of hardship before, and that hardship can be transformative. My mother is living proof of that. Her story gives me strength, and I hope it does the same for others.

This is a condensed version of Jingyu’s story as told to Jiang. It has been edited for clarity and length.

“If other people can survive here, we’ll be able to survive.” 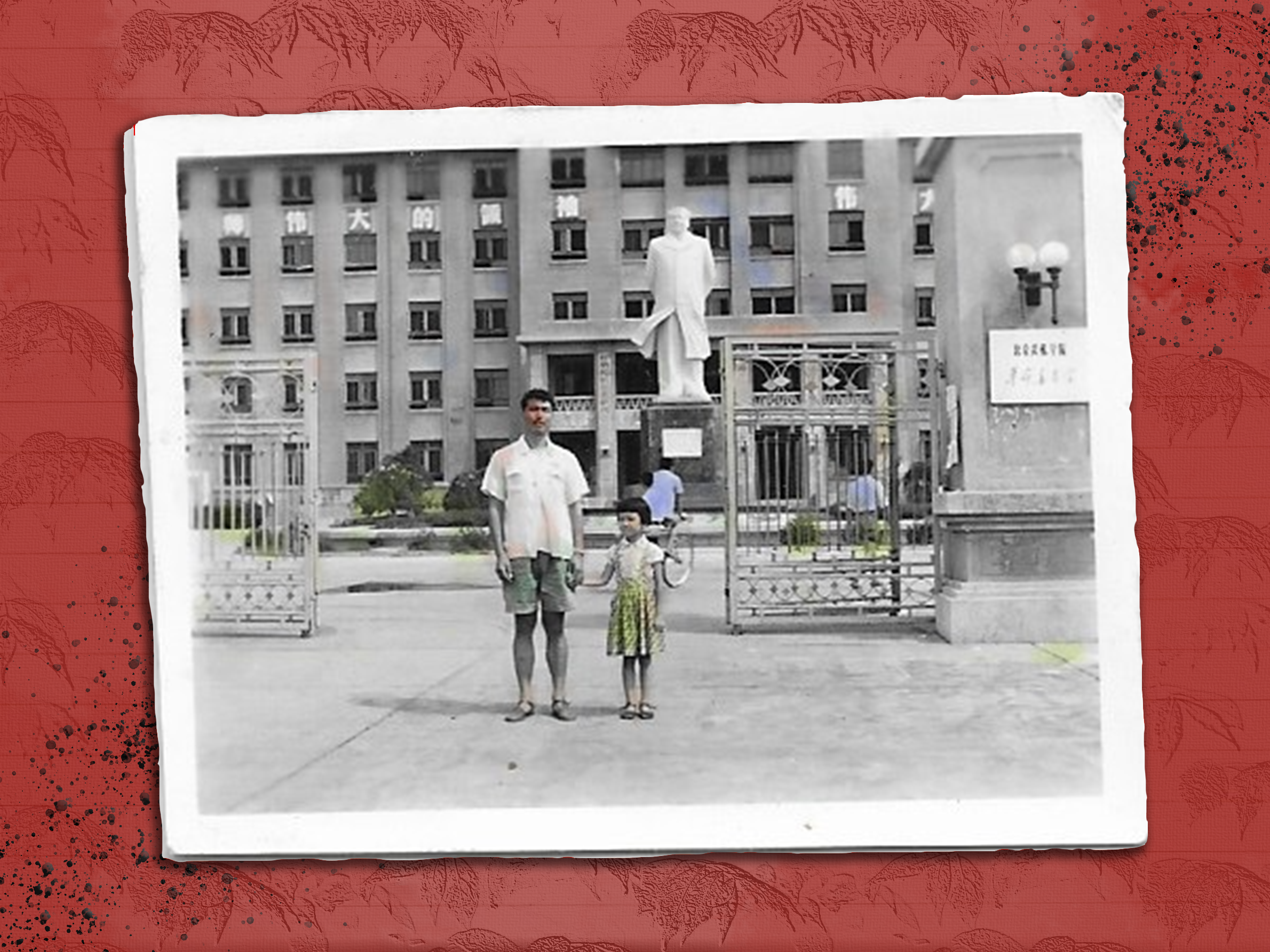 Courtesy of the Li FamilyJingyu, age six, stands with her father in front of the college where they lived circa 1968.

The day we left, we took two old leather suitcases with us, full of as many of our belongings as they could fit. They had to throw away everything else. We waited for the bus outside a classroom building, and the bus carried us to the Beijing train station. Everybody on the bus was going to the camp. They all knew each other because they were all from the same college. They asked me, “Are you excited to ride a train?”

I was unimpressed. I was like, “Yeah right, I just rode a train a couple of days ago to visit my grandma.” But this train ride was much, much longer.

The labour camp [was] on the border of Hunan and Hebei, south of Beijing. The landscape was very bare. There was nothing, just yellow dirt and the fields where they were growing crops. There was one tall, yellow building that was the only man-made thing in sight. It was surrounded by walls and there were watchtowers on each corner. It used to be a prison for real criminals, but when we got there, most of the people there were political prisoners like us.

We were assigned a room in an outbuilding that was built with mud and twigs and had a straw roof. There were no windows, just a hole with some slanted bricks. There was one table, one chair, and one bed, which was just some wooden slats on top of some bricks. In Beijing, we’d had running water, a flushing toilet, electricity, and glass windows. So when they told us this was going to be our home, I started crying. My mum said, “If other people can survive here, we’ll be able to survive.”

They said, “We don’t know when we can go back.” At that point, I lost hope. Later, my mum told me she thought I had mental problems back then because I would just sit there and recite my Beijing address over and over again.

The days just passed. The hardest thing was the food. We ate boiled pumpkin every day. It was really tasteless. Sometimes we had steamed bread or porridge. There were no bathrooms, just a short wall with a ditch behind it. You just had to squat down behind it. I don’t think I ever took a shower. We would get warm water in our canteens and use it to wash our faces and wipe our bodies.

At first, there were around five children in the camp, but their parents sent them away early on and I became the only kid in the camp. My parents decided it wasn’t safe for me to be a girl, so they cut my hair and made me clothes from my father’s clothes to make me look like a boy.

Sometimes, my dad would take me bird hunting at night. There were some low bushes a short distance from the camp, where birds would sleep. My dad had a flashlight he would use to stun the birds, then he’d kill one with a slingshot he’d made out of two sticks and a rubber band.

There were also a lot of grasshoppers around, so we would catch grasshoppers. We’d burn some branches, throw the grasshoppers into the fire, and when the fire died down we’d get them out and eat them.

At around six each morning, they would play “The East is Red” over the loudspeaker. I’d brush my teeth outside by a ditch, then we’d eat leftover pumpkin for breakfast.

One time, a sheep got sick and they had to kill it. Since they had to split it with the whole camp, they gave me a piece of an ear. It was so good.

We brought three books with us: Mao’s Little Red Book, the Barefoot Doctor’s Manual, and a book of revolutionary children’s poems. I memorized everything in the Little Red Book and many of the poems. Only 10 or 20 years later did I realise what the meanings of the things I memorized were.

Mostly, I’d just sit around. I’d read those three books or I’d go watch my parents work in the field. I had a pencil box and notebook but I was afraid to use them.

Finding joy in fireflies and turnips 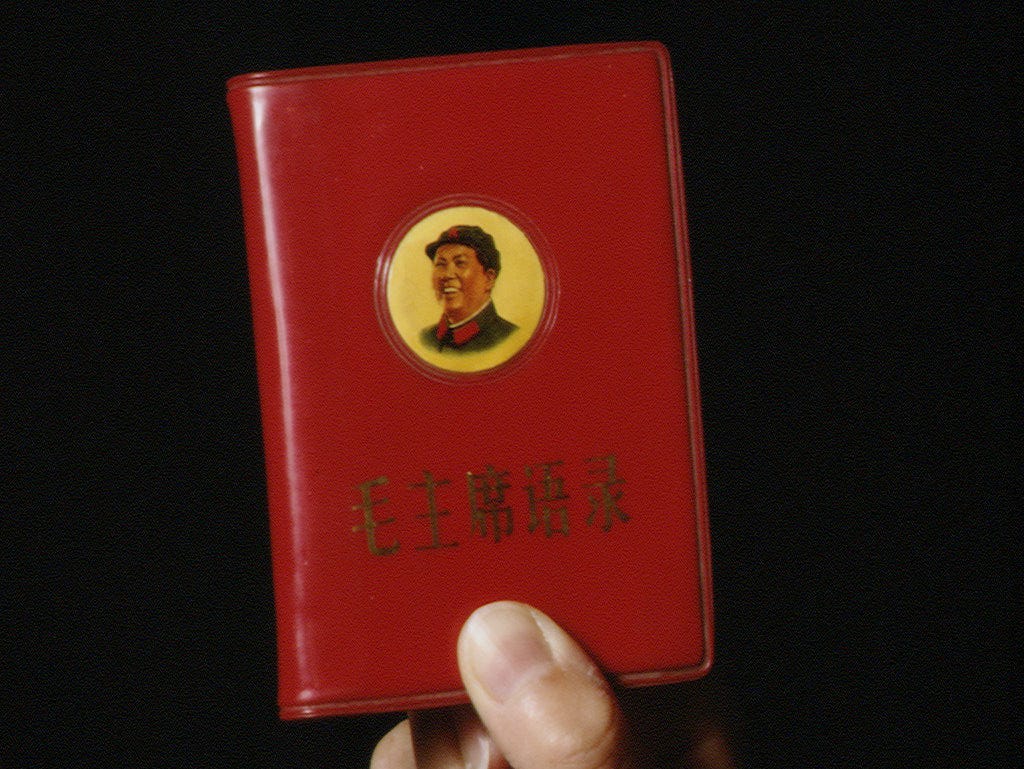 My mum later told me she felt relieved to be in the countryside, because in the city it was worse. They would “dou” people on stages. [Ed. note: “Dou” refers to “struggle sessions,” acts of public torture and humiliation that were common during that time]. On campus, people were afraid to talk to her. She even considered killing herself.

But in the countryside, she felt a sense of freedom because all the people in the camp were in a similar situation. People helped each other more. One night, there was a bright spot in the distance. A nearby labour camp was on fire, so everybody took a bucket and ran over to try to help. People were so close. The guy who served food knew my parents, so he always had a big smile when he saw me. He called me “Little Goldfish.” He always gave me more.

Since we didn’t have enough kerosene for lamps, we would catch fireflies in a bottle. That was the most thrilling thing to me because in Beijing you never saw fireflies. And recognising all the things we grew was a joy, too, because before that I’d never seen farmland before. Pulling a turnip from the dirt was actually pretty joyful.

Every time the mailman came, everybody would wait there for letters from their family. Once, I got half a pound of candy from my grandma. That was such a joy. You never knew who was going to send you what. And even if you didn’t get anything, you still looked forward to it.

“In labour camp, even though our material life was zero, that connection with other people built hope and gave us joy.” 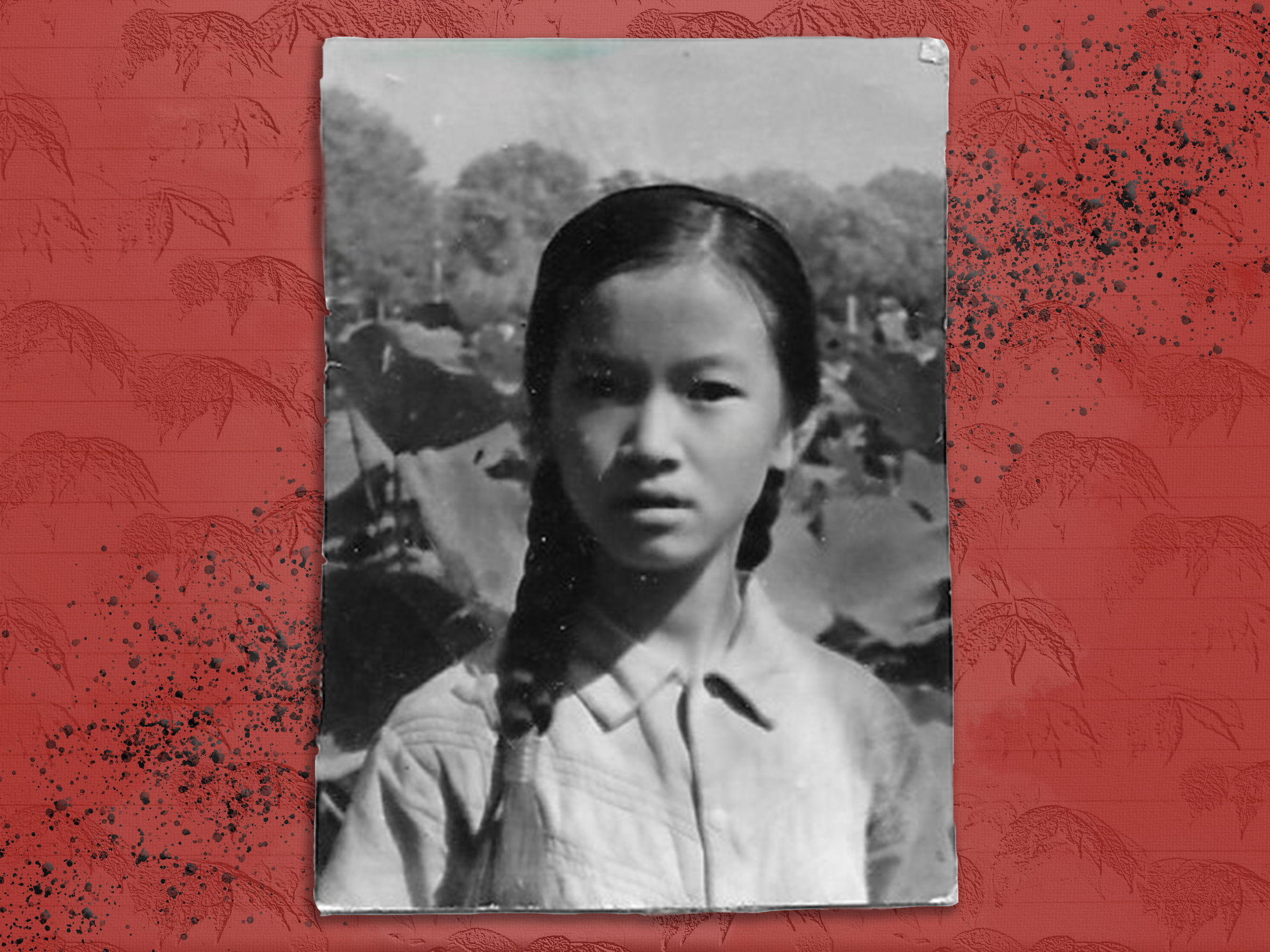 I was 12 when my parents got back to Beijing. I really wanted to go to school, but our residency cards had been revoked so I couldn’t enroll. We were assigned a damaged apartment on the top floor. Everything was broken. But I still felt really happy to have running water and a bathroom. It was like day and night. Going back to Beijing was the happiest thing ever. It was like a dream.

I learned to ride a bike. It wasn’t the right size, so I couldn’t sit on the seat, but I just put my two legs inside and pushed halfway down and halfway forward. On the weekends, my dad would take us to Yi He Yuan, and we would go swim in the lake. Swimming was one of my biggest joys in the summer.

I also learned calligraphy. I had nothing to do, but I had a brush and ink and I kept writing. That’s why I have super nice handwriting. When I finally started school at 16, the principal called me to his office. He said he couldn’t believe I’d never been in school because my writing was so good.

No matter what situation you’re in, you can always find joy. I love notebooks now because, during that time, if I had a notebook I could just put my imagination down on paper. It brought me so much joy.

I feel I appreciate a lot of stuff more than other people. If I’d never been through all this trouble, I’d probably appreciate what I have less. Because I went through so much, fewer things are hard. I can see hard things as just another challenge. I know that it’s natural for things not to go smoothly. I know challenges are not necessarily bad because they might help me build more muscle for certain things.

There’s no comparison between the pandemic and living in a labour camp. Now, you have food, the internet, everything. But I think people feel trapped right now. They feel the loss of their social connections. That’s the hardest part for people. In labour camp, even though our material life was zero, that connection with other people built hope and gave us joy.

So I make more phone calls. Sometimes I think about things my friends said or did years ago, ways they helped me or things they said that changed my perspective. And I find their phone numbers and I call them.