A lesbian couple used social media to find a free sperm donor, and got pregnant twice for less than $300 total 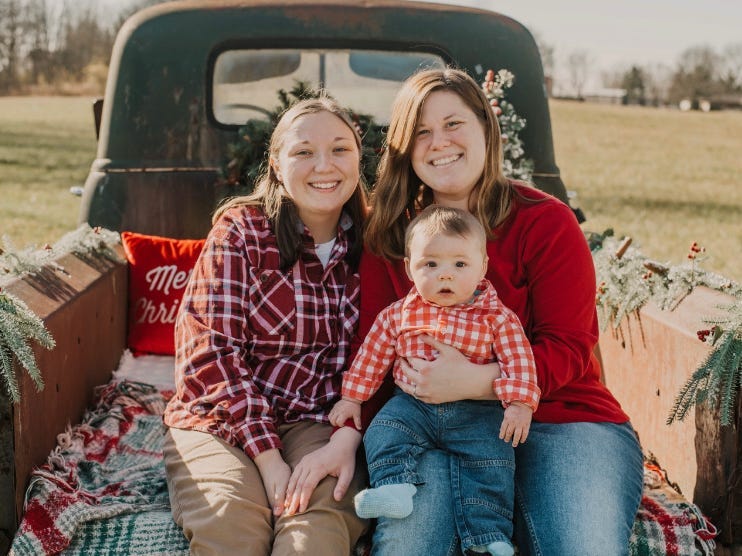 Krystle Hiott PhotographyKayla Ellis, right, with her wife and son Owen, who was conceived using a private sperm donor they found on an app.

In July, 27-year-old Kayla Ellis started a TikTok account as a joke after she and her wife became obsessed with the video-based app’s brief, quirky, and educational content.

Just six months later, Ellis has become an influencer in her own right, with more than 100,000 TikTok followers. Ellis’s videos tackle private sperm donation, a process she and her wife went through in 2019 to conceive their son Owen when they realised sperm banks were too expensive.

Ellis ended up using Just a Baby, a Tinder-like app for people looking for sperm, egg, and embryo donors or surrogates. In addition to the Just a Baby app, private sperm-donation Facebook groups, like the 11,000-member Sperm Donation USA, have become destinations for those seeking artificial insemination on a budget.

It’s a move more people who want to start families but can’t afford pricey clinics are considering, the New York Times previously reported. Going the sperm-bank route costs around $US1,000 for one vial of swimmers, and then hundreds of dollars more for sending and storing the sperm, getting inseminated, and potentially going through counseling with the donor.

Like other private sperm donation influencers, Ellis demystifies the entire process on her TikTok page, from finding a private donor to making a legally binding agreement and using the donated sperm to get pregnant.

It all started with a simple Google search

“My wife and I, we would sit around and look at our phones and we would see that they were $US900 for one vial of sperm. We couldn’t get our hopes up because we knew we couldn’t afford that every single month, several times a month. It was devastating,” Ellis, who lives in Indianapolis, Indiana, told Insider.

That’s when she Googled “How to find a sperm donor” and came across Just a Baby. After a month of weeding out “weirdos” who wanted sex out of the arrangement, Ellis found her perfect match.

“He wasn’t doing it to get anything sexually out of it. It was just him telling us that he was very passionate about this. He really wants to help other people create a family and he feels like part of his life’s work is to help other people, especially people in the LGBT community, who don’t have that option,” said Ellis.

After a FaceTime call and a couple of in-person meetings, including one at the donor’s house with his wife, they met up to receive the sperm at a family friend’s Airbnb and began the insemination process. Ellis became pregnant on their first attempt.


Read more:
Why heterosexual relationships are so bad for us, according to a sex researcher

It proved so successful they decided to work with the same donor for their second baby, with whom Ellis’ wife is currently 20 weeks pregnant.

STD testing, notarized agreements, and background checks are part of the process

Ellis uses her TikTok to educate others about private sperm donation, using her own experience as a guide.

She knew nothing about the process before she did it herself, and self-educated using support groups for children conceived using sperm donors. She’d ask them for parenting advice, and then get connected with their parents, who explained their experiences. When it came to the safety and legal aspects of meeting and working with a donor, Ellis said her family members with law enforcement backgrounds were able to give helpful advice.

Ellis’ followers often ask about sperm-donor red flags, and how to find the right one.

According to Ellis, everyone wants something different in a sperm donor. For her, finding someone who didn’t want a parenting role and would do artificial insemination, rather than having sex to inseminate her, were top priorities.

She also required potential donors to give STD test results, undergo background checks, and sign a notarized contract for the agreement. Anytime a potential match said no to these requirement, Ellis moved on.

“I wouldn’t consider them because I feel like that is just leaving the door open for something to happen. You can never be too careful with your babies,” she said.

After a month of talking to donors who she either rejected or put on her list of potentials, the donor who she and her wife ended up going with reached out to them on Just a Baby.

The donor, who’d previously gave his sperm to other families, asked Ellis for a FaceTime call to see if they all got along, worked around her schedule, and said he didn’t want to do interviews about their dynamic, if it came down to that. For Ellis, those factors helped her decide he was the right fit.

“He’s the sweetest human being I’ve ever met because he gave us our entire world and he wanted nothing in return,” she said.

The first time they met in person, he embraced Ellis and her wife with a three-way bear hug and said, “I am so happy to meet you guys in person. Now let’s start your family.”

On TikTok, Ellis also talks about the insemination process, which involves slathering the vagina in sperm-friendly lube, putting sperm in a syringe, and injecting them.

All of the supplies Ellis needed to do this â€” specimen cups, ovulation tests, syringes, the special lube, and notarizing fees â€” cost $US136. She likes to say her children cost that amount, because the donor gave his sperm to her family for free on both occasions.

She said eight TikTok followers have reached out saying they have become pregnant using private sperm donors and artificial insemination since watching her videos.

“That makes me so happy,” she said.

At-home artificial insemination comes with potential risks, health experts have previously warned, like cramping, infection, or puncturing the uterus, which is rare.

Ellis’ donor won’t have a hand in parenting, but she keeps him updated, texting the occasional photo of Owen and updating him on her wife’s pregnancy.

When Owen and her other child are teenagers, Ellis and her wife plan to tell them about how they were conceived and give them the option to meet their biological father.