Pat Riley once envisioned that LeBron James would still be competing for championships with the Miami Heat at this point.

Instead, James’ exit from the team forced the Heat into a strange, winding rebuild over the last six years. Now, they are back in the Finals, squaring off against the player who forced Riley into a rebuild that almost went off the rails.

When James left the Heat in free agency in 2014, stunning the NBA world by returning to the Cleveland Cavaliers, the move stung Riley.

“I had two to three days of tremendous anger. I was absolutely livid, which I expressed to myself and my closest friends,” Riley said in Ian Thomsen’s book “The Soul of Basketball: The Epic Showdown between LeBron, Kobe, Doc and Dirk that Saved the NBA” (via ESPN’s Jackie MacMullan).

Riley added: “My beautiful plan all of a sudden came crashing down. That team in ten years could have won five or six championships.”

Riley told Thompson that James seemed distracted throughout the meeting, looking at a TV in the hotel room playing the World Cup. Riley reportedly asked if they would mute the TV. 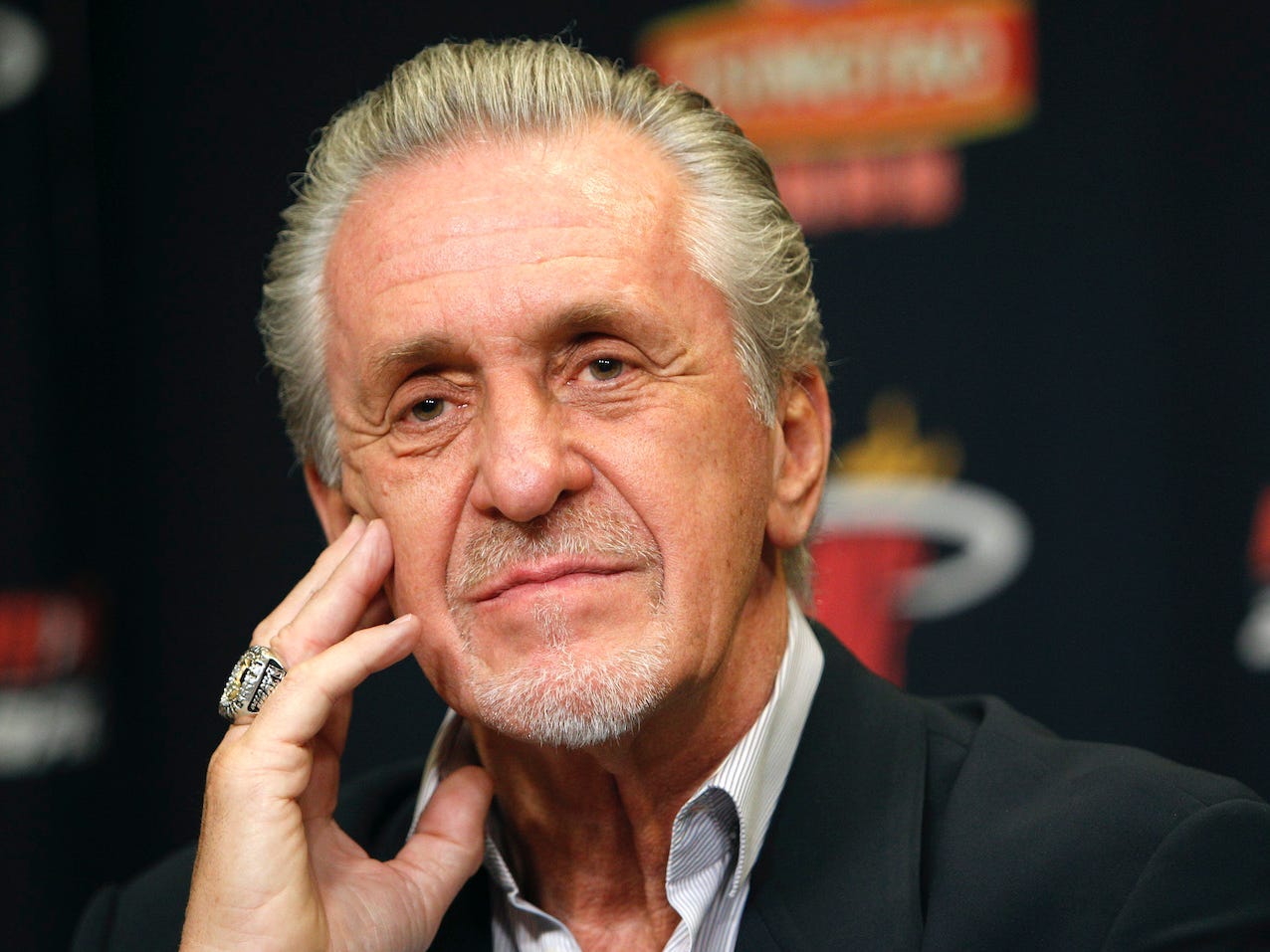 According to Thompson, Riley left the meeting worried about being able to retain James. Shortly thereafter, he received a call from Paul, who put James on the line. James began by thanking Riley for their four years together, indicating he was leaving.

“I was silent,” Riley said. “I didn’t say anything. My mind began to just go. And it was over. I was very angry when LeBron left. It was personal for me. It just was.”

“I had a very good friend who talked me off the ledge and kept me from going out there and saying something like Dan Gilbert. I’m glad I didn’t do it.”

The Heat did still have Dwyane Wade and Chris Bosh. In September,ESPN’s Zach Lowe reported that during the 2014-15 season, Riley was “determined” to “chase” James, who had formed a new super-team in Cleveland.

The Heat missed the playoffs in 2014-15. They made a big mid-season trade for Goran Dragic, but Bosh missed the end of the season with blood clots.

With Wade, Bosh, Dragic, Luol Deng, and a rejuvenated Hassan Whiteside, the Heat looked like a playoff threat going into 2015-16. However, Bosh was again forced to miss the second half of the season with more blood clots, and the Heat lost to the Toronto Raptors in seven games in the second round.

The following summer, Wade left in free agency over a contract disagreement with the Heat. Bosh’s career was essentially over, and the Heat were forced into a strange pivot.

Over the following seasons, the Heat kept chasing stars and coming up short, with players like Kevin Durant and Gordon Hayward taking meetings with them in free agency, but choosing other teams.

While the Heat compiled scrappy, loveable teams and had successful reclamation in projects in players like Whiteside, James Johnson, and Dion Waiters, they were stuck in a tough in-between: not good enough to be true playoff threats, nor bad enough to acquire high lottery picks.

Worse, when the Heat struck out on the top free agents, they doubled down on their guys. Head-scratching contracts included:

As Lowe reported, other teams soon asked what the Heat were doing and how they’d get out of their own mess.

Heat culture produces stars, one way or another 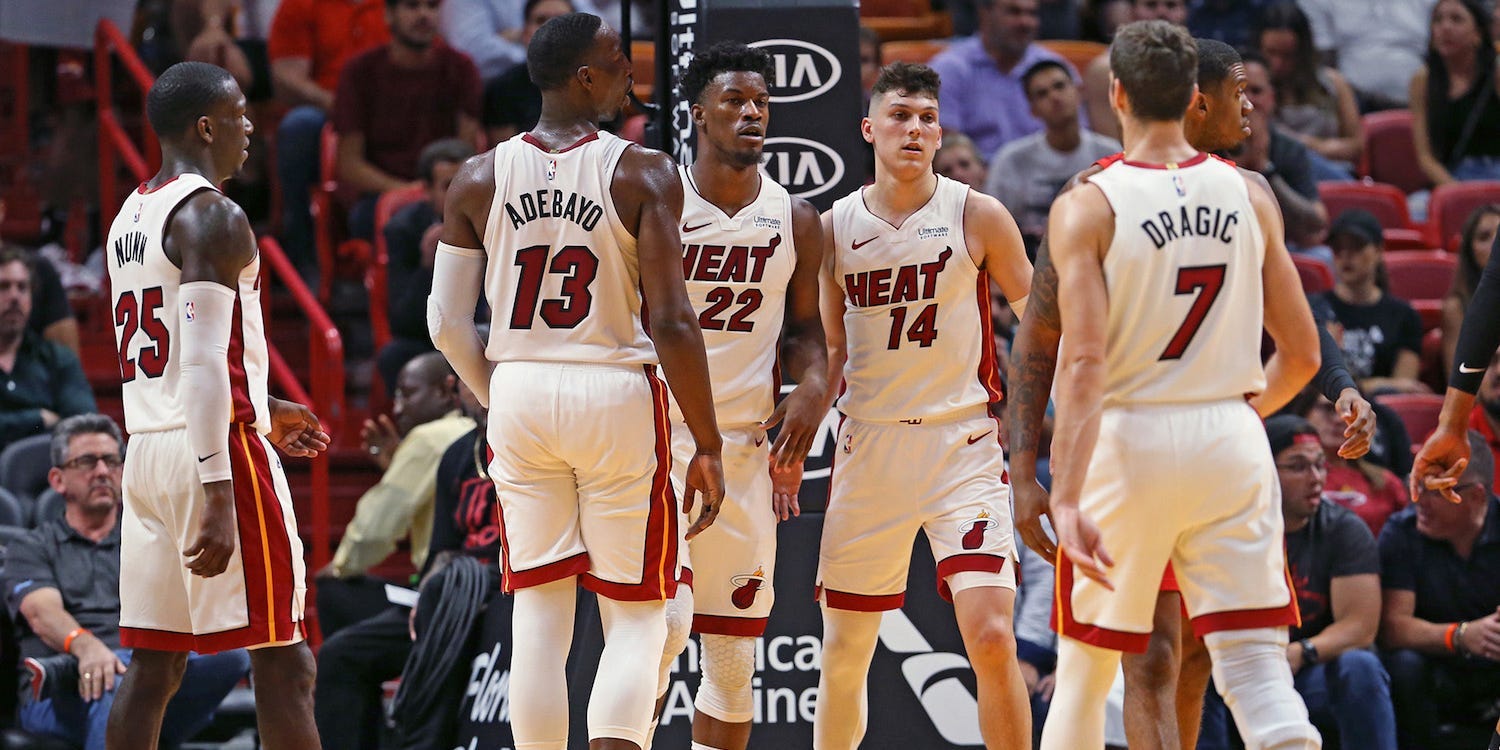 The Heat’s turn-around was rapid. Despite never picking higher than 10th, they landed productive players in the draft and outside of it that bolstered their roster.

Bam Adebayo, taken 14th in the 2017 draft, showed signs of being a diverse, multi-position defender and offensive orchestrator.

Josh Richardson, a 2015 second-round pick, blossomed into a 3-and-D star who looked capable of being more than just a role player.

Duncan Robinson, an undrafted forward from Michigan, who had transferred from a DIII school, was cultivated into a sharp-shooting three-point menace in the G League.

The Heat picked Tyler Herro with the 14th pick in the 2019 draft and signed Kendrick Nunn after he went undrafted. 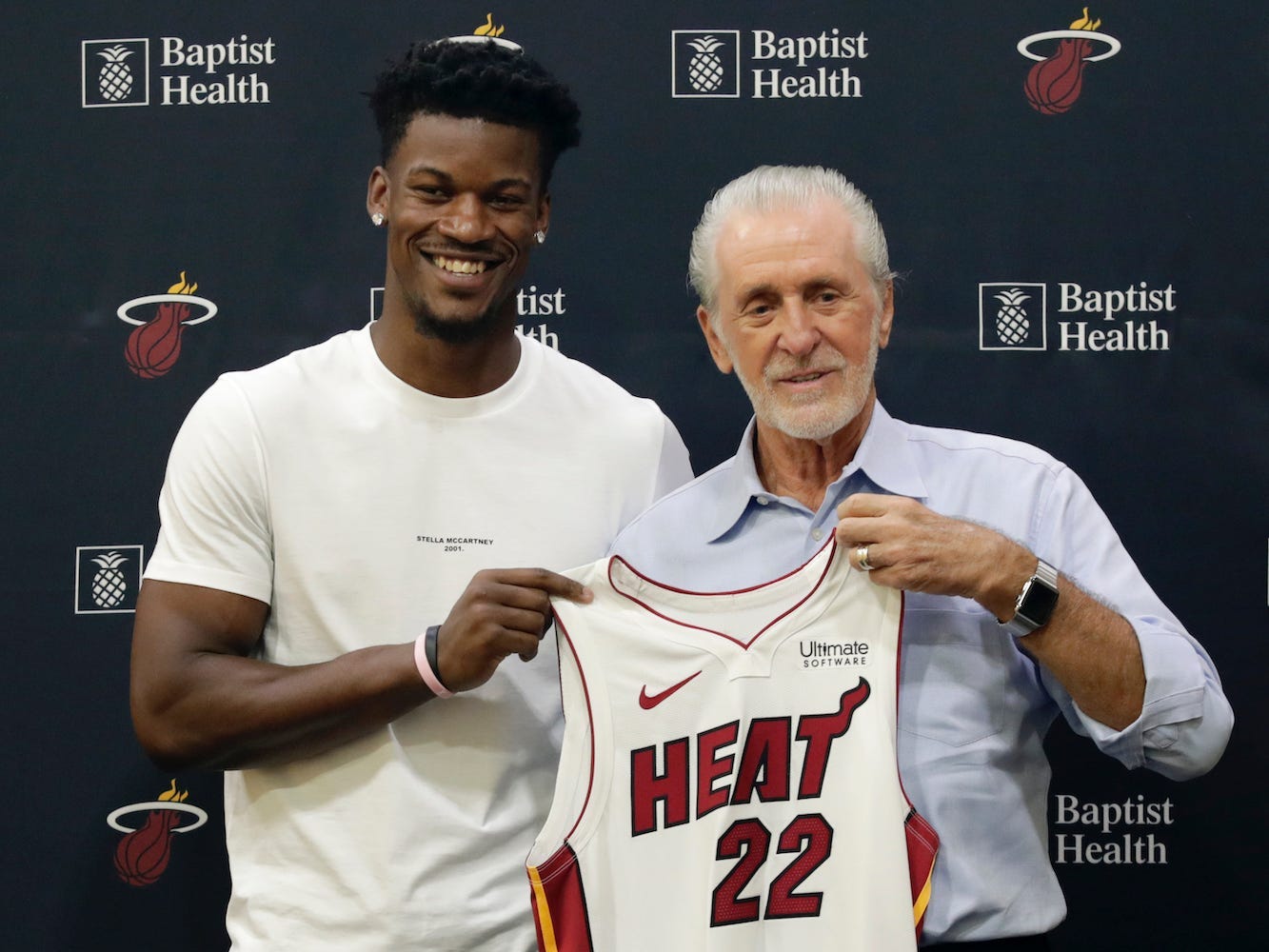 Lynne Sladky/AP ImagesJimmy Butler and Pat Riley at a press conference in July 2019.

And, of course, Heat culture finally landed them a big free agent in Jimmy Butler, who was enamoured with Miami. The Heat used Whiteside and Richardson to acquire Butler in a four-team sign-and-trade.

As Lowe wrote about the Heat’s appeal:

“Different stars have different reasons for being attracted to Miami. Some are sucked in by Riley’s legend and aura. Most people enjoy good weather. The lack of a state income tax in Florida matters. But so does everything the Heat has built: their constant pursuit of winning; three recent championships; their high conditioning standards and refusal to tolerate less from anyone of any stature; Erik Spoelstra’s coaching rÃ©sumÃ©, nearing Hall of Fame quality if it isn’t already there (it probably is).”

With veterans like Dragic and Olynyk, and after a February trade, Jae Crowder and Andre Iguodala, the Heat had a deep and versatile roster with a true All-Star, dependable supporting cast, and up-and-coming youngsters who seemed to add to their games each month.

“While there may have been some carnage always left behind when he made these kinds of moves, in Cleveland and also in Miami, he did the right thing,” Riley told Thomsen. “I just finally came to accept the realisation that he and his family said, ‘You’ll never, ever be accepted back in your hometown if you don’t go back to try to win a title. Otherwise, someday you’ll go back there and have the scarlet letter on your back. You’ll be the greatest player in the history of mankind, but back there, nobody’s really going to accept you.'”

Riley told Thomsen he sent James a text during Game 7 of the 2016 Finals between the Cavs and Warriors, telling him he’d be “free” if he won.

After that game, James told ESPN that members of the Heat organisation said nasty things about him when he left.

“When I decided to leave Miami â€” I’m not going to name any names, I can’t do thatâ€‰â€” but there were some people that I trusted and built relationships with in those four years [who] told me I was making the biggest mistake of my career,” James said. “And that s— hurt me. And I know it was an emotional time that they told me that because I was leaving. They just told me it was the biggest mistake I was making in my career. And that right there was my motivation.”

Riley denied to Thomsen it was him. 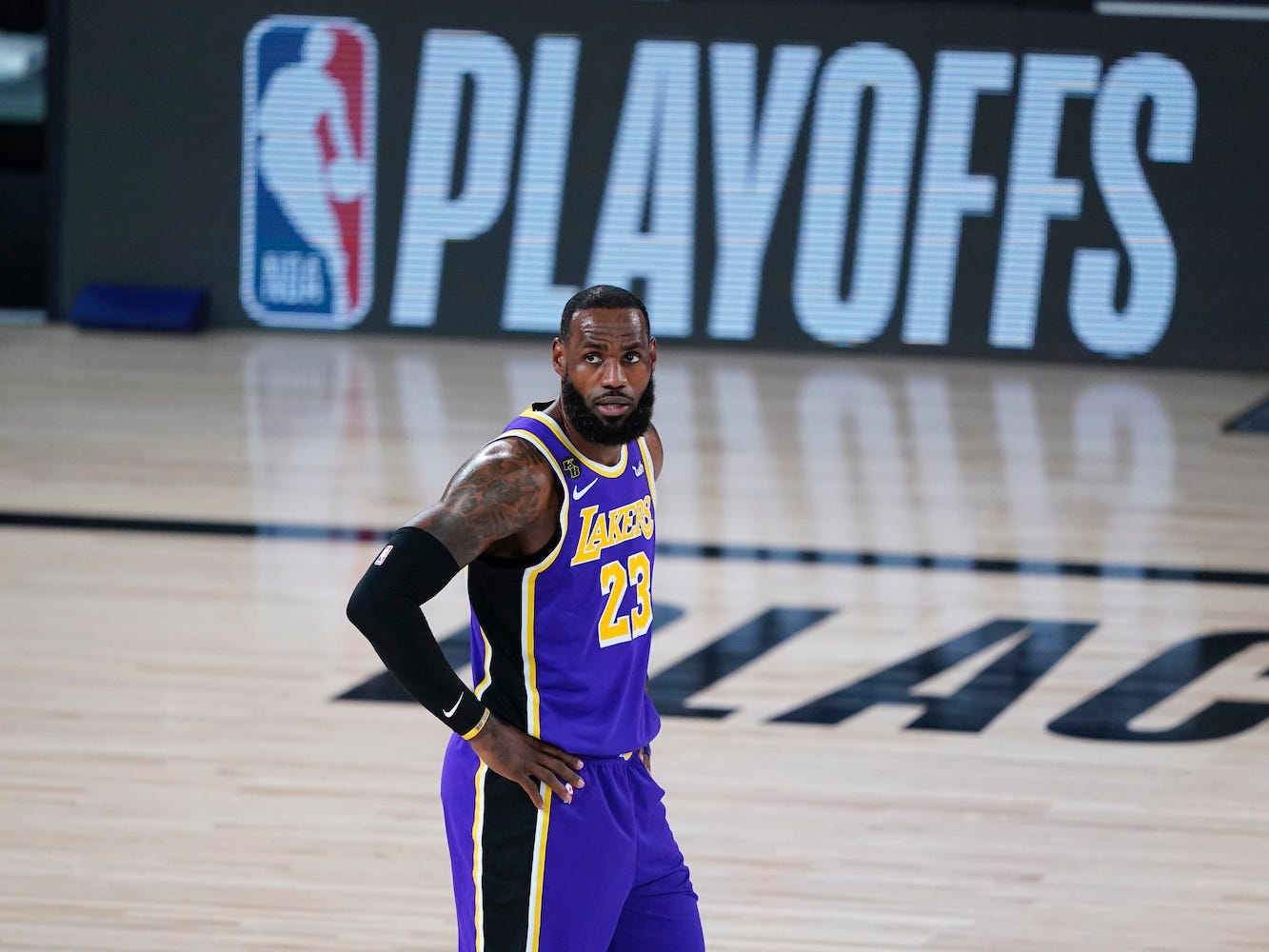 However, MacMullan reported in 2018 that sources said there had still been no contact between James and Riley. They warmly greeted each other at a Heat-Nets game in 2019, but it’s unclear how much they have spoken beyond that interaction.

On Tuesday, in advance of the 2020 Finals, James was asked for his feelings about Riley. James stared and said it was a “broad question.” He then spoke at length about Riley’s legacy and history of winning in the NBA.

“When I hear Pat Riley, I think about one of the greatest minds probably this game has ever had. He’s won at every level. I saw the stat the other day that he’s been part of a championship in four decades. This league is not the same without Riles. He’s a great guy, great motivator, someone that just knows what it takes to win, and he’s shown that over the course of, what, 40 years.”

James then said there is no extra motivation for him to beat the Heat. The feeling may not be mutual.