LeBron James after winning his 4th championship and Finals MVP: 'I want my damn respect' 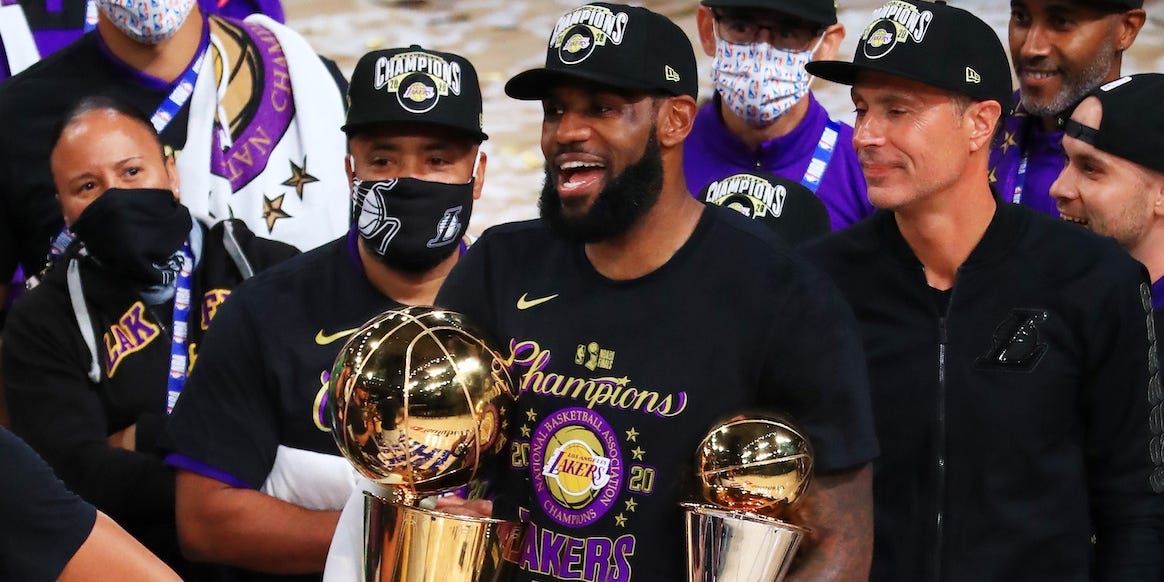 LeBron James has added to his already stunning legacy, winning his fourth NBA championship as the Los Angeles Lakers beat the Miami Heat, 106-93, on Sunday.

After scoring 28 points with 14 rebounds and 10 assists in the championship-sealing Game 6, James also won Finals MVP, the fourth of his career.

After the game, during the Lakers’ trophy presentation, James delivered a simple message about he and the Lakers getting back to the pinnacle of the sport.

James and the Lakers underwent a dramatic turnaround from 2018-2019 to 2019-2020. The Lakers missed the playoffs in James’ first year with the team. James suffered a groin injury that held him out for nearly a month. The team was undone by trade rumours for Anthony Davis that James was tied to.

They traded much of their young core and several future draft picks for Davis in the offseason and then built a team some in the NBA world said lacked talent and cohesion around the two stars.

And James, preparing to turn 35 last December, faced doubts about his ability to play at his usual level.

James proved himself 2nd to none in the biggest moments

There are legitimate arguments as to whether James is the best player in the NBA â€” in the regular season.

Giannis Antetokounmpo and Kawhi Leonard are two-way fulcrums on playoff teams. James Harden is an offence unto himself. Davis may be the Lakers’ most impactful player.

But come the postseason, James is still the player to have when the theoretical chips are down.

There are moments when James’ age shows. He can’t beat defenders off the dribble quite as easily anymore. He was never the NBA’s purest shooter, and there are moments when his outside shot betrays him, leaving him looking a bit awkward on the offensive end. His energy wanes a bit â€” his 36 minutes a game this postseason were the fewest he’s averaged in his career. His days of 45-minute nights are over; he simply has to get the rest.

But most of the time, James looks like himself. Whether in the half-court or transition, nobody can slow him down when he gets a step on a defender. He is a master pick-and-roll manipulator. And this year, a renewed focus on the defensive end helped the Lakers become the best defensive team in the NBA over the course of the season.

Speaking with reporters after Sunday’s game, James said he was “fuelled” by people doubting him.

“Personally, thinking I had something to prove fuels me,” James said. “It fuelled me over this last year and a half, since my injury. It fuelled me because no matter what I’ve done in my career up to this point, there’s still little rumblings of doubt or, you know, comparing me to the history of the game, and: ‘Has he done this? Has he done that?’

As the NBA’s commissioner, Adam Silver, prepared to present James with the Finals MVP trophy, he said that one day the trophy would be named after James.

Those who watched these Finals gave James his respect: He was the unanimous Finals MVP.