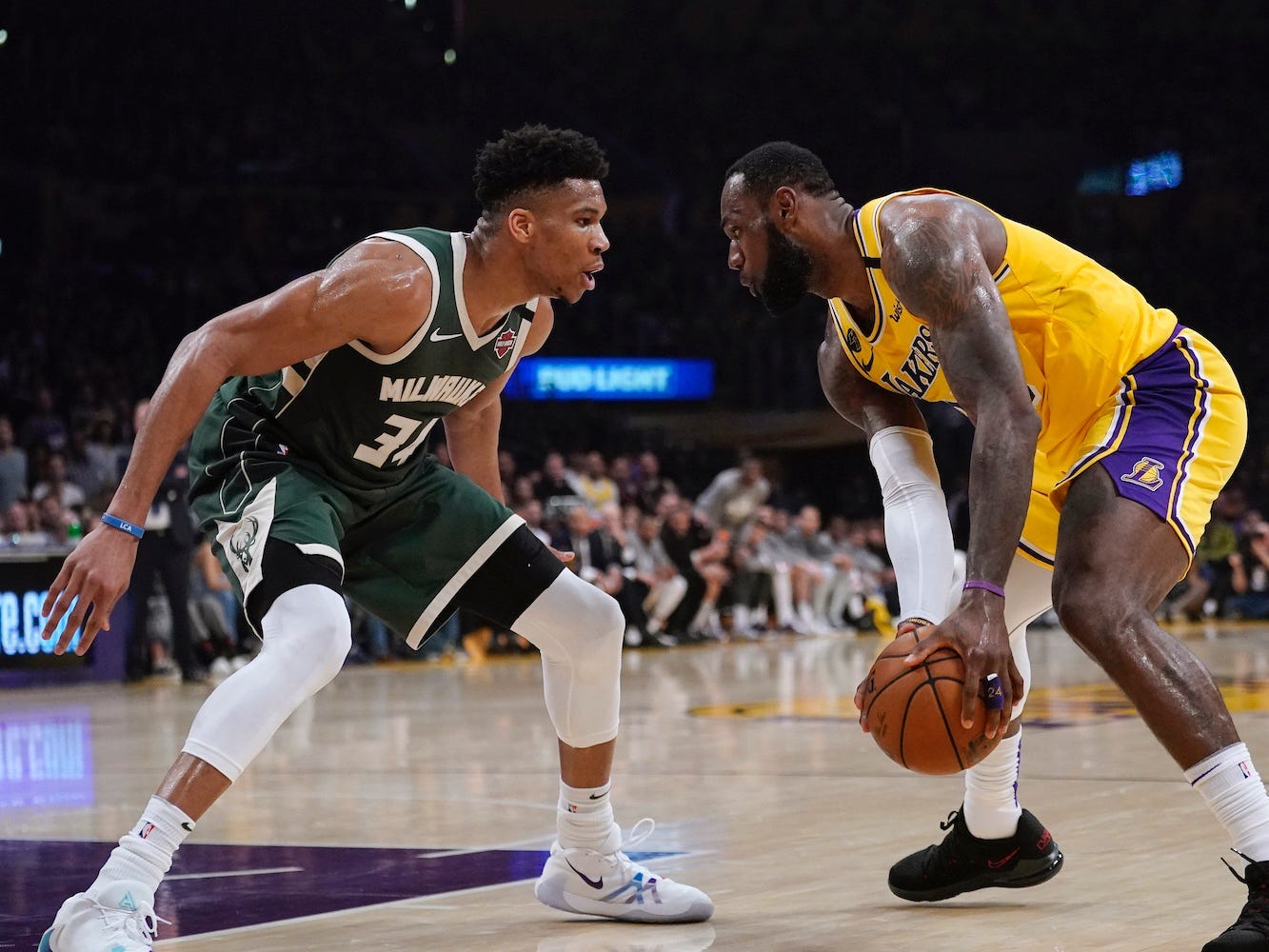 In June, not everyone thought the NBA should come back.

Its return would only detract from the historic protests over the police killing of George Floyd, which was caught on video. Now, less than a month after play resumed on July 30, Milwaukee Bucks players have gone on strike – what the team originally called a boycott – to protest the police shooting of Jacob Blake in Kenosha, Wisconsin, which was also caught on video. Blake was shot in the back and now appears to be paralysed from the waist down.

By the evening after Milwaukee’s players went on strike, the next three games had been called off. The Athletic’s Shams Charania reported that Bucks players were attempting to contact Wisconsin Attorney General Josh Kaul from their locker room.

Later on Wednesday night, Charania, David Aldridge, and Joe Vardon reported the Los Angeles Lakers and Clippers – the two best teams in the league this season aside from Milwaukee – had voted to cancel the season, though other reports indicated the vote was not a binding one. By Thursday, Charania reported the players had agreed to continue playing “but want to find new and improved ways to make social justice statements.”

They have already made a bold statement.

The sudden collective action by NBA players – essentially a “wildcat strike,” or when union members stop work without leadership’s authorization – is already the largest sudden work stoppage in NBA history. Even if the playoffs conclude, this moment has high stakes for the league and its partners, especially Disney and its subsidiary ESPN, with $US1 billion invested in creating the “bubble” that allows play to safely resume.

NBA players, long unionized and ready and willing to strike, have all the leverage right now over their league and its partners.

The dynamics have clicked into focus over the past 24 hours: A group overwhelmingly made up of Black workers has withheld its labour to advocate for political changes, with billions on the line.

They are the most powerful employees in America, and they are acting like they know it.

The members of the Players Association have outstanding leverage, compared with many employees, because of a variety of factors.

The first is commonly associated with Michael Jordan: the superstar effect. Teams already employ the best of the best: Just 1.2% of college players and 0.03% of high-school players make it to the NBA, according to the NCAA. That might suggest thousands of basketball players are waiting in line to play if an athlete steps out of line, but the superstar effect – whereby the marginal difference between very good and exceptional leads to outsize financial rewards – allows for big-name players with lofty endorsements to make it difficult for teams to just get rid of them. The same holds true for today’s leaders, like the Bucks’ Giannis Antetokounmpo and the Lakers’ LeBron James.

Another is the presence of a strong union, a rarity in American business. According to Investopedia, all the major American sports leagues have had unions for about 70 years.

The NBA union was repeatedly locked out under former Commissioner David Stern, who famously took a scorched-earth approach to negotiations. But Stern isn’t the commissioner anymore, now it’s his protégé Adam Silver, a famously player-friendly leader, and the former union chief that Stern regularly got the better off, Billy Hunter, was replaced by Michele Roberts, a fierce cogitator.

Plus, the NBA players union benefits from having superstar players leading the drive. All-Star Chris Paul serves as president, and superstars like Kyrie Irving – who said the bubble could distract from civil-rights momentum – and Finals MVP Andre Iguodala work as vice presidents. James was also once a vice president of the union, a turning point for the unit’s high-profile leadership.

NBA players have been leading strikes since the 1950s

In 1959, a few years after the NBA players union formed, Minneapolis Lakers star Elgin Baylor sat out a high-profile game after a hotel refused to house him with the rest of his white teammates.

Baylor told his teammate and fellow NBA great Rod Hundley, “Rod, I’m a human being. I’m not an animal put in a cage and let out for the show,” The Charleston Gazette-Mail reported. Baylor’s protest resulted in then-NBA Commissioner Maurice Podoloff promising to end hotel separation between Black and white players.

A few years later, after the union was unsuccessful in getting pensions and other requests approved, a strike was in the cards at the 1964 All-Star Game, the first ever televised.

“The players were controlled by the owners,” former All-Star Jerry West told the Los Angeles Times in 2011. “All of us felt like we were slaves in the sense we had no rights.”

The owners agreed to the players’ demands, and the game was delayed about five minutes.

The next major threat of a strike happened many years later in 2014, when players were ready to strike during a nationally televised game in the aftermath of audio being leaked to the media of Clippers owner Donald Sterling telling his girlfriend to delete a photo of her and Magic Johnson because he is Black.The San Jose Mercury News’ Marcus Thompson reported that plans for “all” NBA games were being formulated that day, but Commissioner Adam Silver took the unprecedented step of banishing Sterling and forcing the sale of his team to, eventually, the billionaire Steve Ballmer.

The Sterling affair demonstrated how race has become a catalyst for collective action by NBA players in the past decade. Basketball players have perhaps been most politically vocal since President Donald Trump’s election, as many prominent players, coaches, and owners have denounced the commander in chief. The Golden State Warriors and Toronto Raptors, the NBA champions since 2017, have not visited the White House.

The Milwaukee Bucks have become particularly outspoken on the issue of police misconduct as the team’s Black players have suffered abuse in their hometown. Sterling Brown is suing the city after police used a stun gun on him and knelt on his neck during an arrest and has written extensively in The Players’ Tribune about his experience. In response to the strike last night, the Bucks released a statement that said in part, “We stand firmly against reoccurring issues of excessive use of force and immediate escalation when engaging the black community.”

After Blake’s shooting, Clippers coach Doc Rivers said while Republicans had been “spewing fear” during their national convention this week, Black Americans were the ones “getting killed.” He told media on Wednesday, “It’s amazing why we keep loving this country, and this country does not love us back. It’s really so sad.”

The GOAT and the whole new game

In the Wednesday night vote held by the players, one voice was leading in arguing for the end of the season: Lakers superstar and NBA icon James, who had tweeted earlier that night: “F— THIS MAN!!!! WE DEMAND CHANGE. SICK OF IT.”

It’s fitting James is a major player in this turn to activism, since a large part of his case for “greatest of all time,” or “GOAT,” rests on his greater outspokenness on civil-rights issues than Michael Jordan, the reigning GOAT. This dates at least back to James speaking out about the shooting of Trayvon Martin in 2012, itself so reminiscent of the violence against Floyd and Blake.

James’ willingness to advocate for social change is one of many examples of the NBA community growing more vocal as the Black Lives Matter movement has emerged in the past decade.

Perhaps James is so vocal about his political beliefs because as the game’s best player for much of his career, he has long known something his colleagues are all starting to come around to: His power lies in how he can’t be replaced. Without the players, there is no game, after all, and to these athletes, pro basketball is no longer just a game.