The absurd 'Learmousine' is half private jet and half stretch limo, and it's for sale — see inside 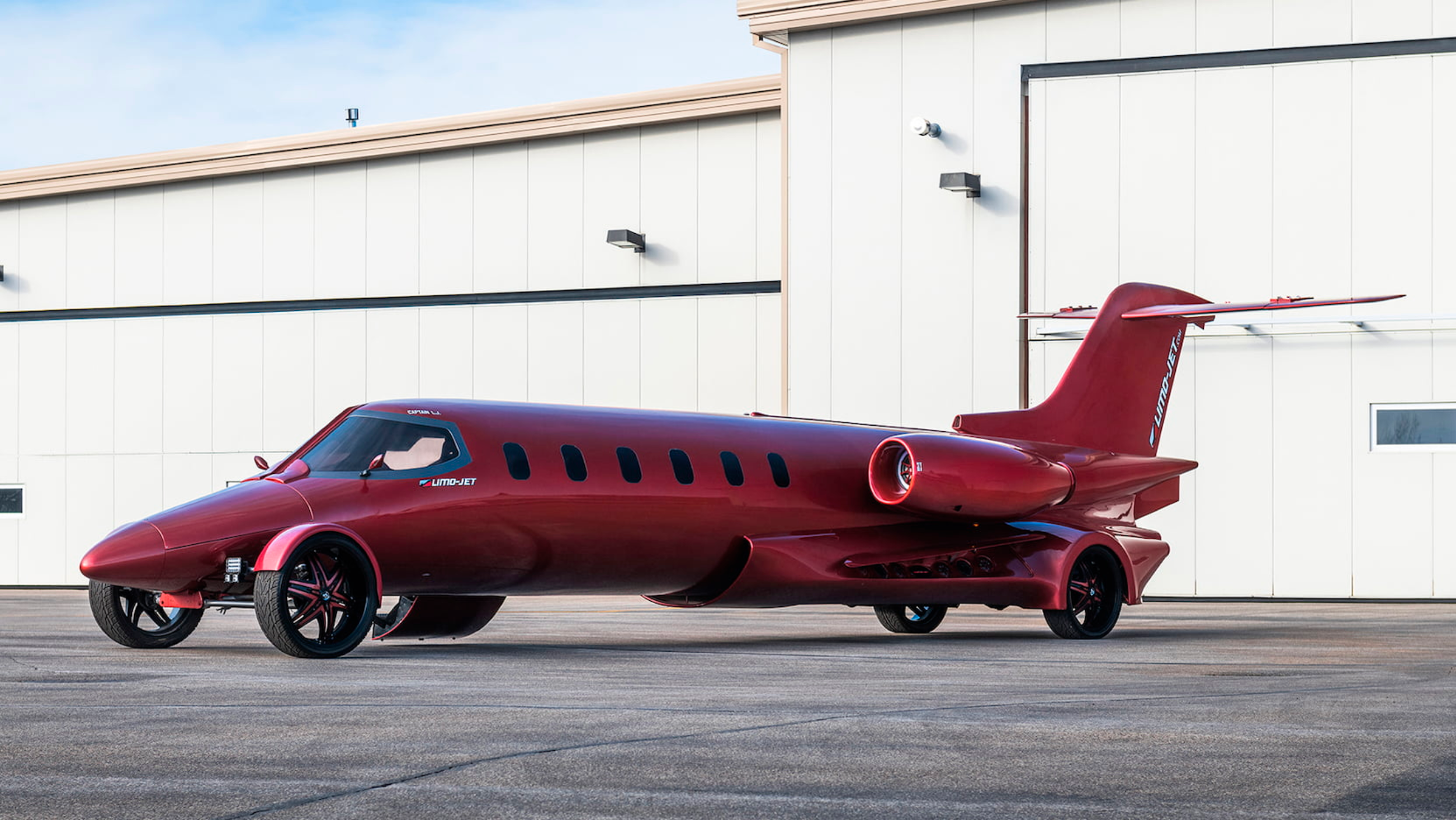 The Limo-Jet– part private jet and part stretch limo, all wrapped up in a mid-2000s, “Pimp My Ride”-era bling package – sticks out among the often understated classic cars Mecum Auctions typically traffics in.

But the world rarely makes sense anymore, and the Limo-Jet is set to cross Mecum’s Indianapolis auction block in June – should the event go on as scheduled amid the coronavirus pandemic.

First discovered by Autoblog, the Limo-Jet, also known as the “Learmousine,” began its life as an everyday Learjet, but 40,000 work hours and two years of research and development stripped the jet of its airworthiness and turned it into a 42-foot limousine. The build was managed by Chicago-based company Exotic Coach, and although the Limo-Jet is street legal, it was conceived as a show vehicle to be displayed at car events.

It’s powered by a 400-horsepower truck engine, seats 18, and rides on 28-inch wheels. Plus, it has a 42-inch flat-screen television and a massive audio system that would make Xzibit and the folks at GAS proud. (If you know that reference, you know it. If you don’t, sorry.)

See inside the head-turning party bus that would put any stretched-out Hummer or Caddy to shame: Also known as the “Learmousine,” it’s a working, driving bus based around a Learjet fuselage. It will be up for grabs at Mecum Auctions’ Indy 2020 event in June, should the auction go on as scheduled. The Limo-Jet was built by Chicago-based Exotic Coach. 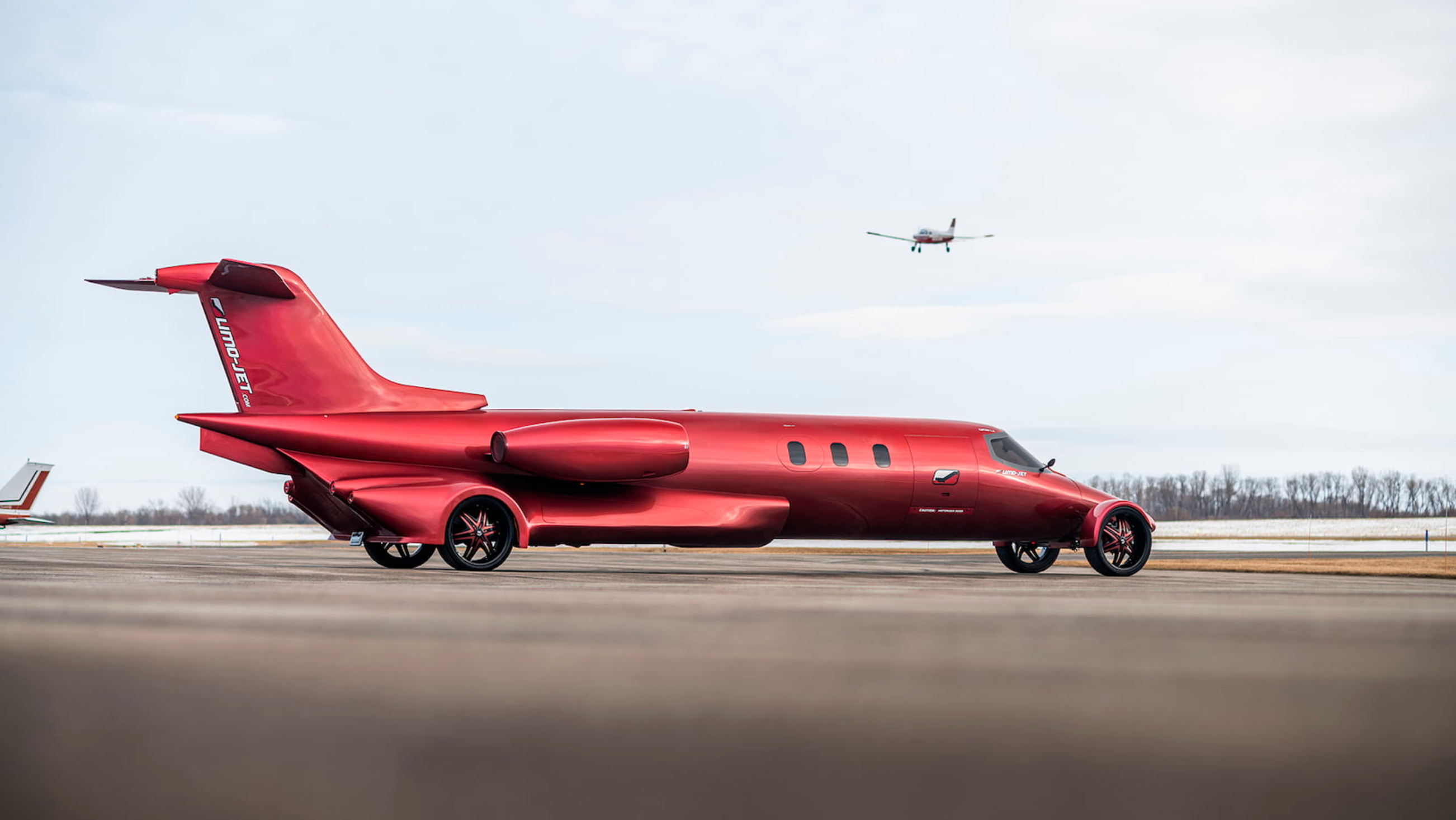 It took 40,000 work hours and two years of research and development to create. To make the jet cabin drivable, a custom steel frame had to be built … … along with custom steering, suspension, and electrical systems. The Limo-Jet is powered by a 400-horsepower, 8.1-litre V8 that’s found in some Chevrolet trucks. 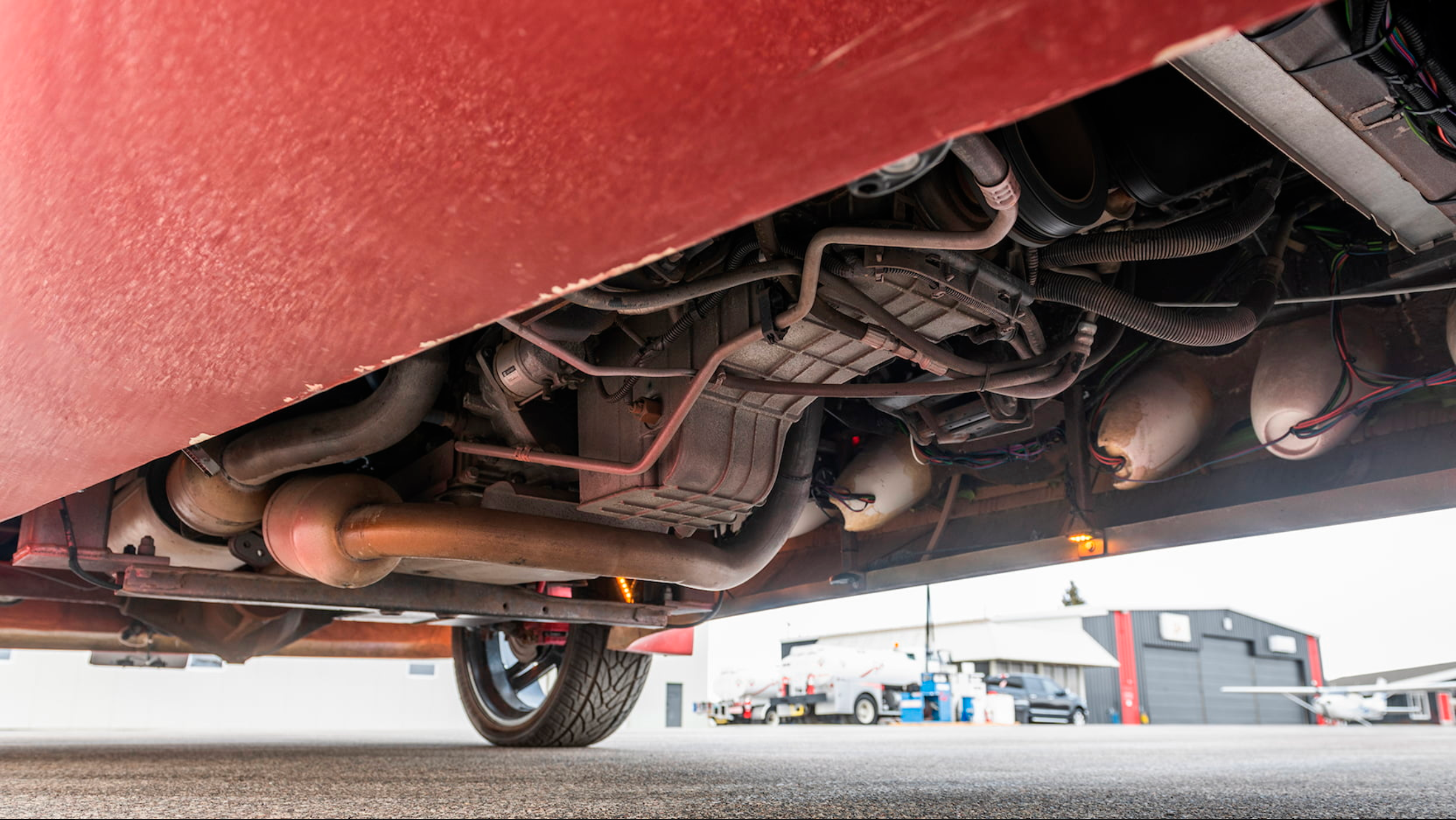 Excessive and flashy in every way, the Limo-Jet has a candy-apple-red paint job … 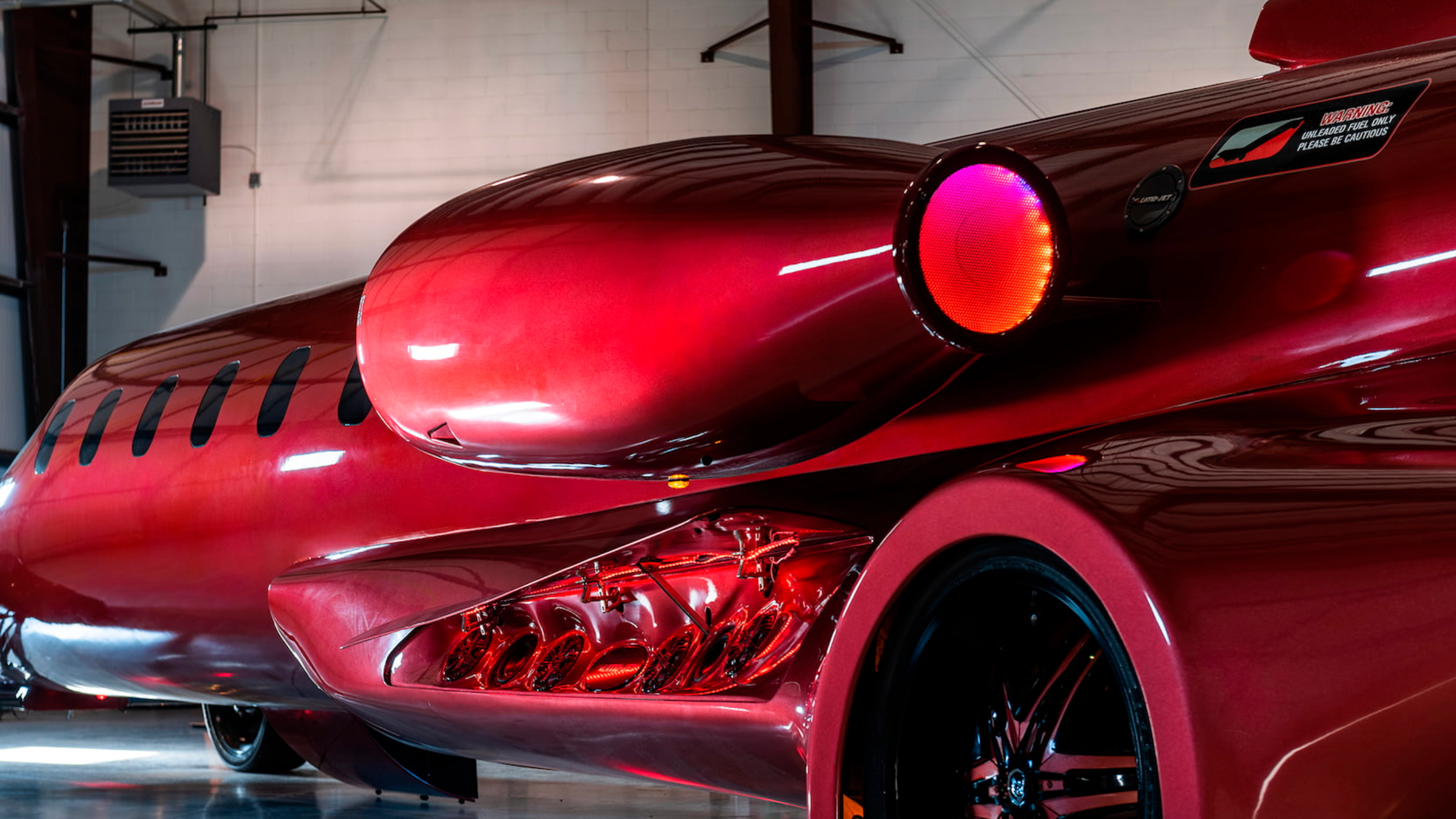 Driver visibility likely isn’t great, but there are four screens to see all of the blind spots. 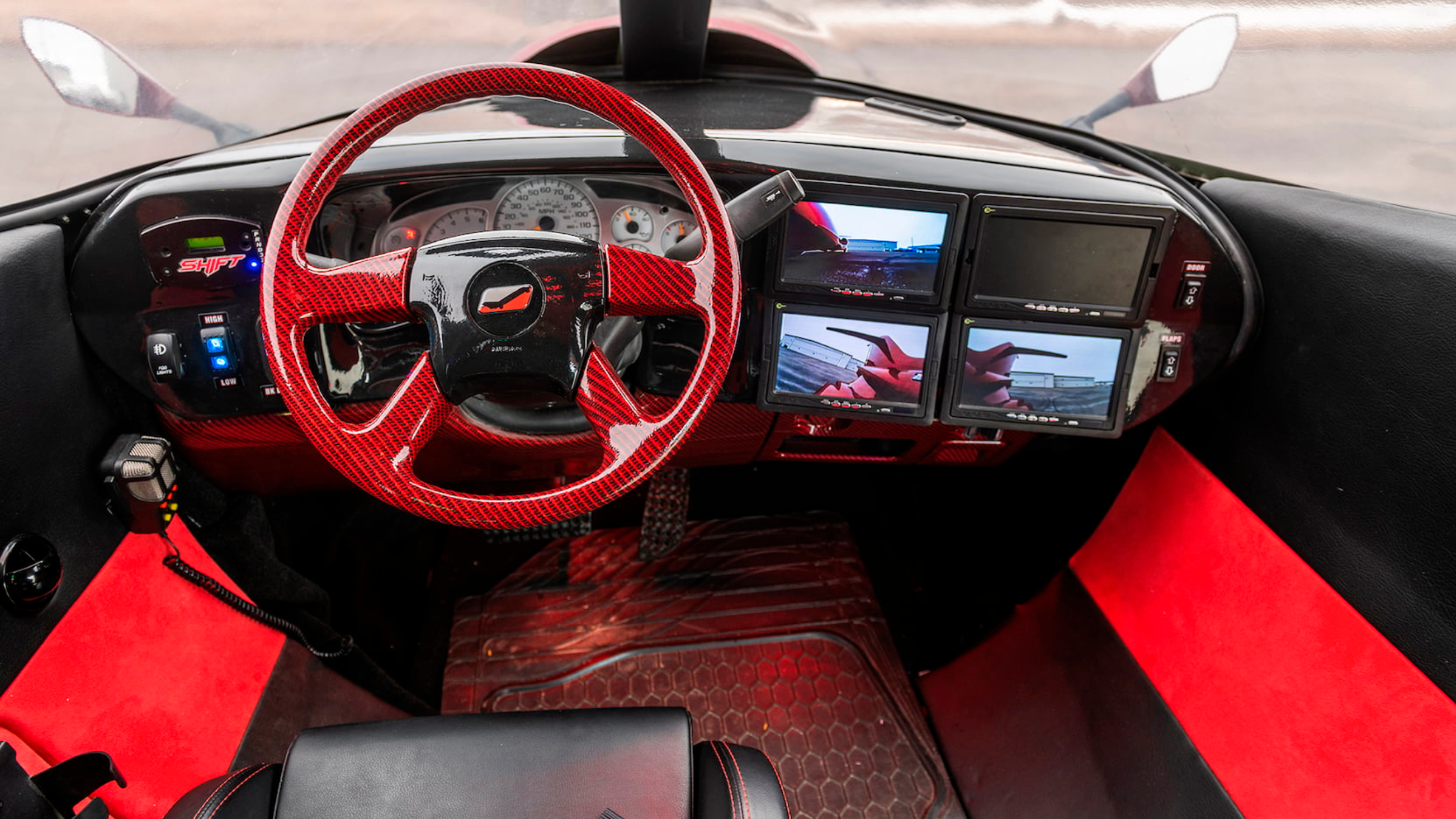 The cockpit also has a racing-style bucket seat and harness … … and plane-style toggle controls on the ceiling. 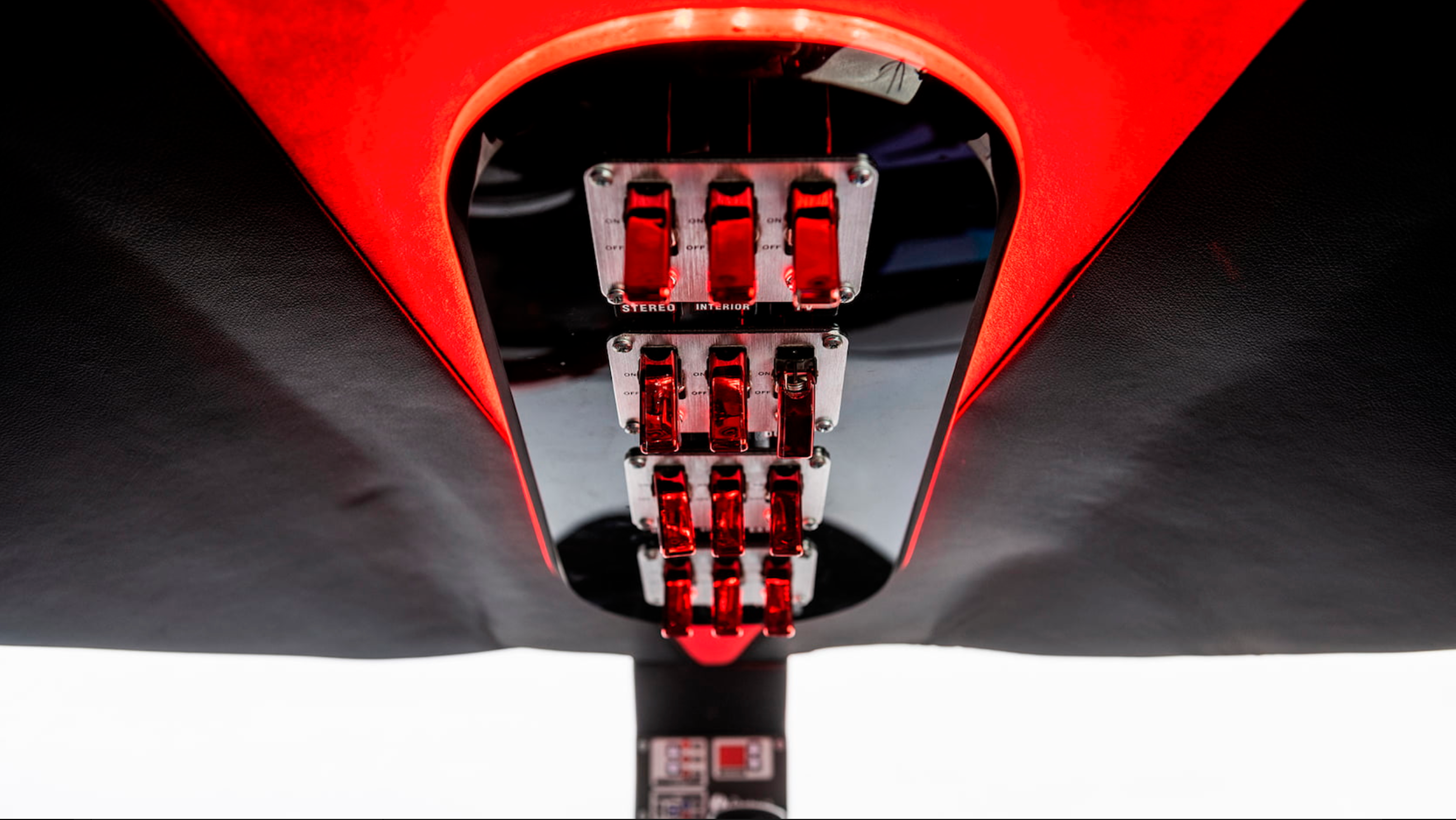 Those switches control lots of interior and exterior features, including the 17,000-watt speaker system … 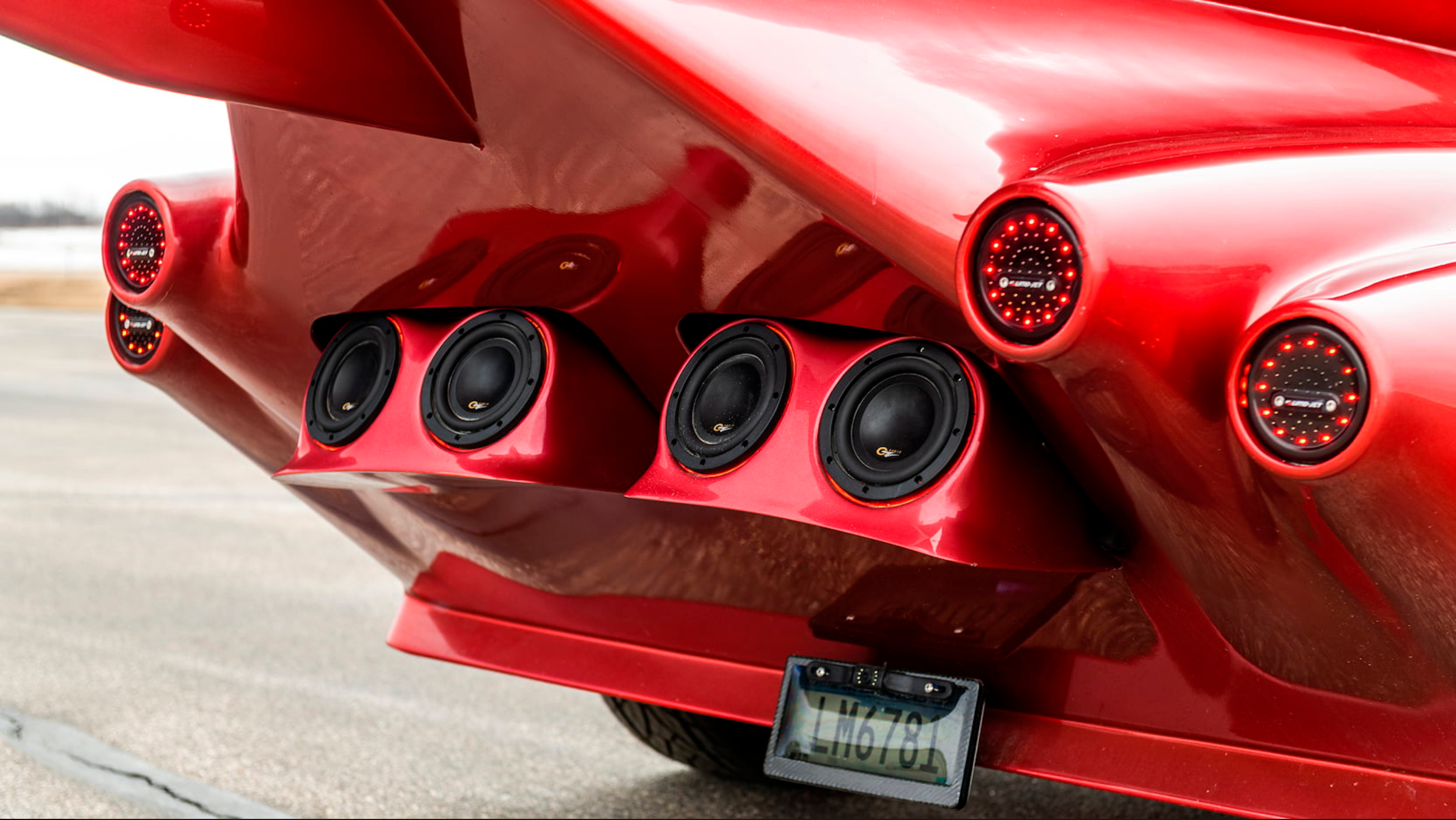 The Limo-Jet has shed its wings, but comes with massive speakers that can play jet-engine noises. 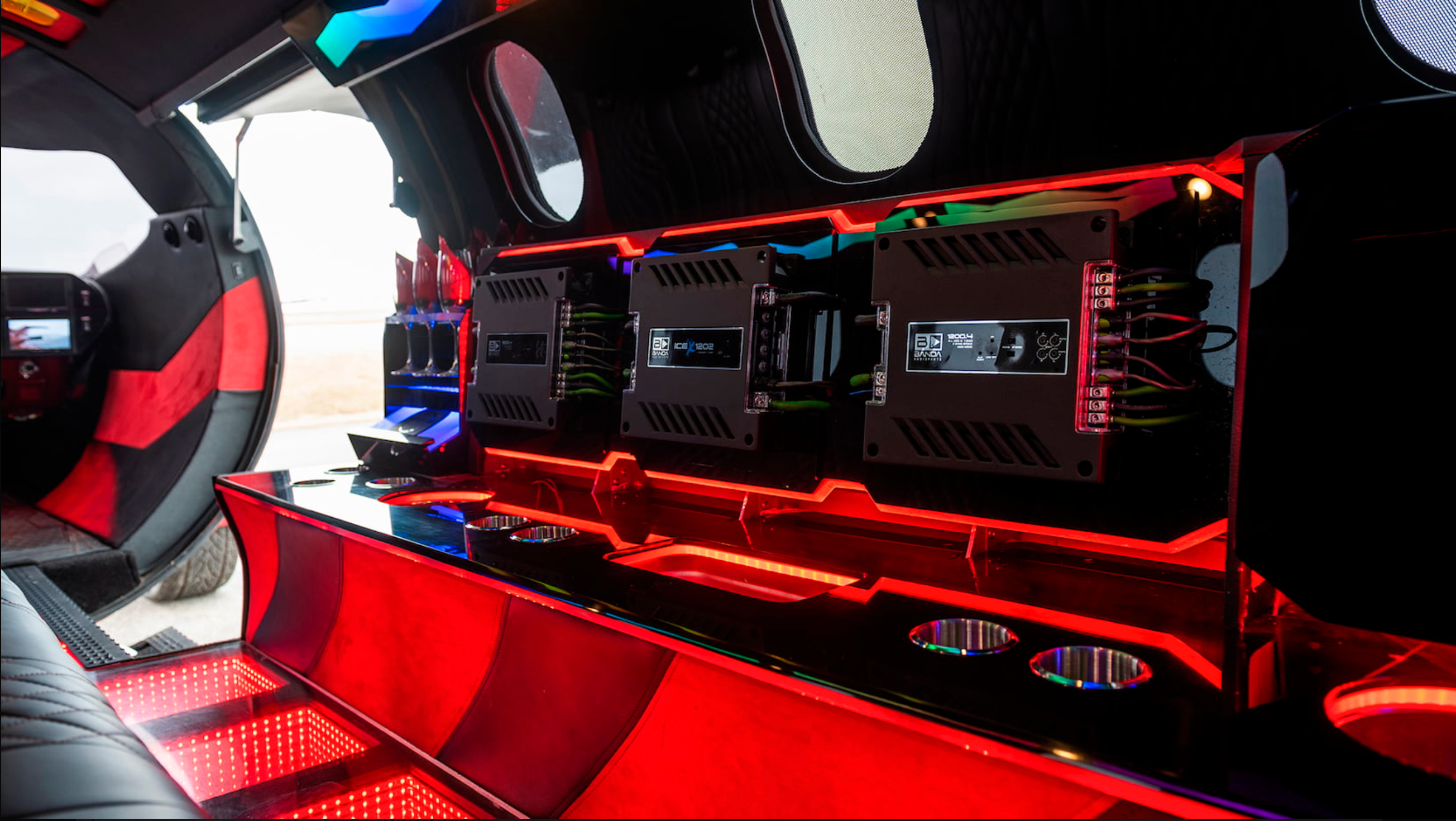 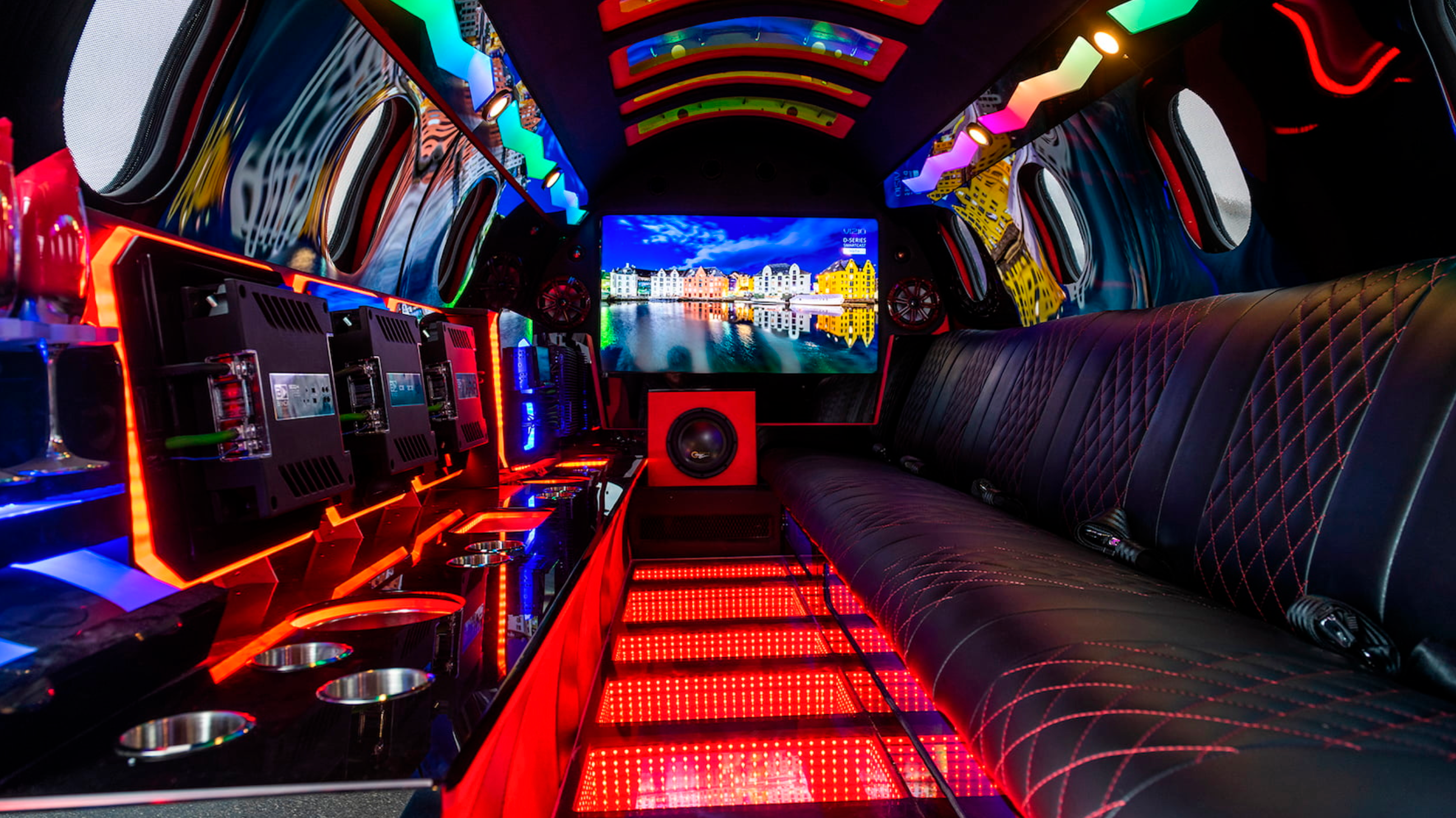 … and plenty of colourful lights. The Limo-Jet is technically street legal, should anyone want to try to manoeuvre it …

… but the seller is also including a 44-foot trailer … At 42 feet long and eight feet wide, the Limo-Jet is likely a bit too unwieldy for city streets … … but the tail fin can fold if the vehicle ever needs to squeeze into a tight space. 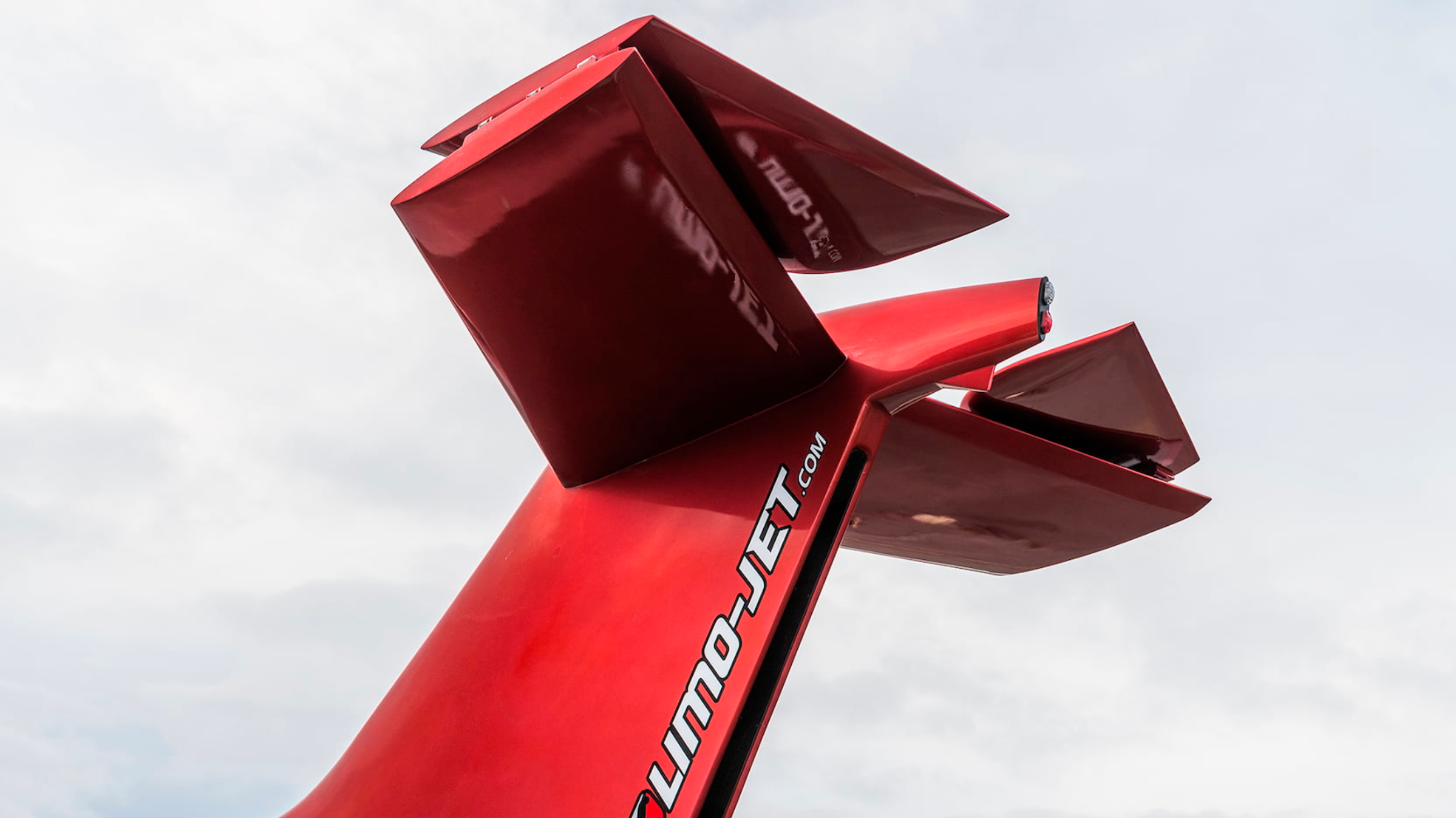 Mecum hasn’t set a price estimate for the flashy ride, but it’s safe to say it won’t come cheap. 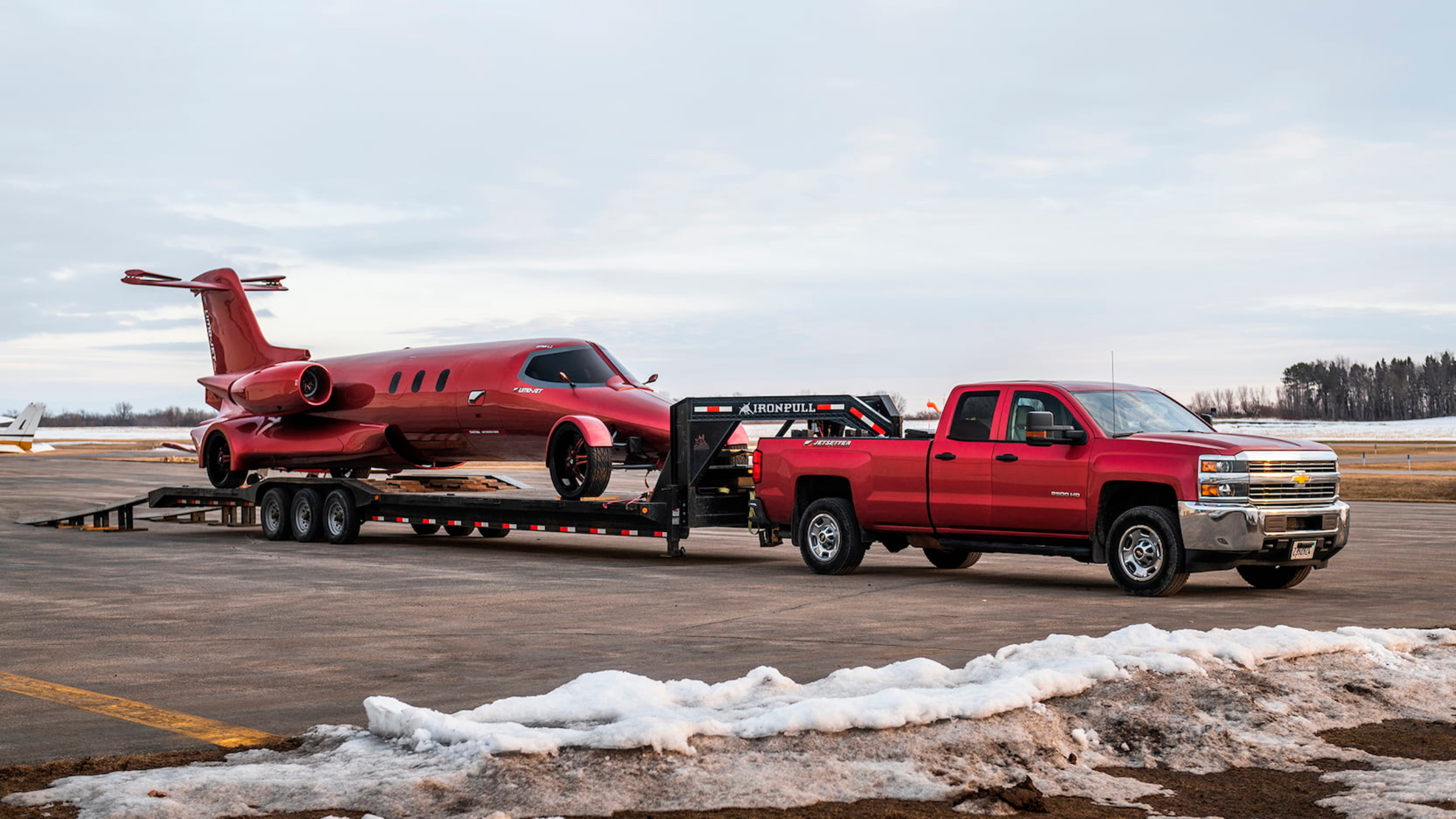