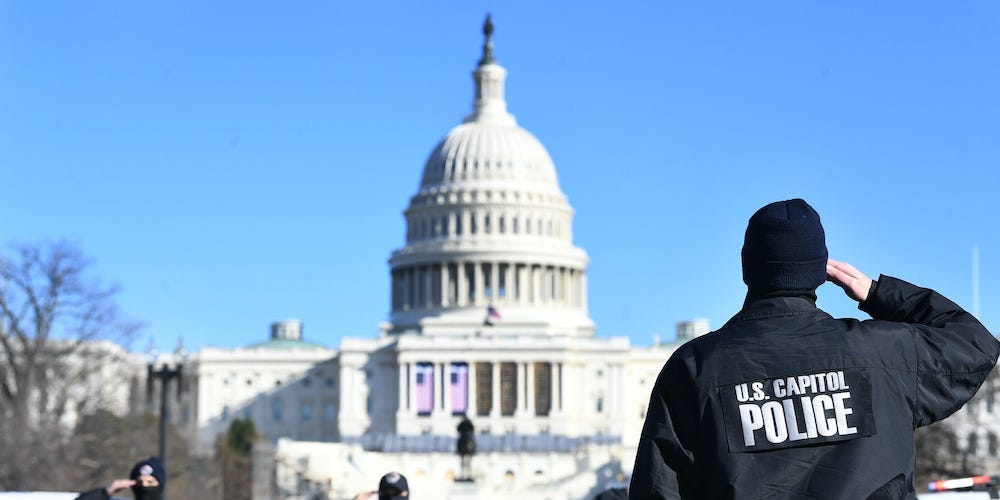 Several lawmakers have put forward legislation to award Capitol Police officer and Army veteran Eugene Goodman one of the highest civilian awards in the US for his actions during the assault on the Capitol by a pro-Trump mob last Wednesday.

During the riots on Jan. 6, the Black officer cleverly and singlehandedly lured a mob of Trump supporters away from the Senate chambers, which were still being secured. The scene was caught on video.

In the video, Goodman pauses and looks toward the Senate floor before leading the rioters the other direction with what looked like a retreat but was actually a ruse to get them to think their intended target was elsewhere in the building.

“It was the smartest thing that he could have ever done,” one of Goodman’s colleagues told The Washington Post Wednesday. “I don’t know that many people who can think on their feet like that.”

Goodman’s co-worker said that his “quick thinking enabled those senators to get to safety.”

“The United States Capitol was under attack by armed, violent extremists, and Officer Eugene Goodman was the only thing standing between the mob and the United States Senate,” Congressman Crist said in a statement.

“I shudder to think what might have happened had it not been for Officer Goodman’s fast thinking and commitment to his duty and his country,” he continued. “While some will remember last Wednesday for the very worst in our country, the patriotism and heroics of Officer Eugene Goodman renew my faith and remind us all what truly makes the United States great.”

Many other lawmakers in both the House and the Senate have praised Goodman for his courage, which is believed to have saved lives.

A friend of Goodman’s told The Post that “he’d do the same thing again” if he had to and that the officer is “not looking for any accolades.” They added that the attention has actually made Goodman uneasy.

Goodman served in the Army from 2002 and 2006 and deployed to Iraq for one year with the 101st Airborne Division.

Eugene Goodman stood in the doorway that day.

We see you, Eugene. https://t.co/MqnFJcgpAW

The XVIII Airborne Corps celebrated Goodman’s valor in a tweet Wednesday, writing “Eugene was a hero long before last Wednesday.”

Capitol police officer Eugene Goodman is rightfully being hailed as a hero after singlehandedly holding back rioters from entering the Senate chambers last week.

An Iraq combat vet and member of this Corps, Eugene was a hero long before last Wednesday.

We celebrate his valor. pic.twitter.com/CLWlLG3bIW

Last week’s violent assault on the Capitol was an attempt by President Donald Trump’s supporters to derail efforts by Congress to certify President-elect Joe Biden’s victory in the 2020 presidential election, which lawmakers successfully did after the Capitol was secured.

The episode saw five people lose their lives, including Capitol Police officer and Air National Guard veteran Brian Sicknick, who made the ultimate sacrifice when he was killed in the line of duty.

To honour his sacrifice, flags were lowered to half mast, and lawmakers have called for Sicknick to be buried at Arlington National Cemetery.

For his role in inciting the deadly riots, the president was impeached a second time by the House of Representatives Wednesday, making Trump the only president in US history to be impeached twice.