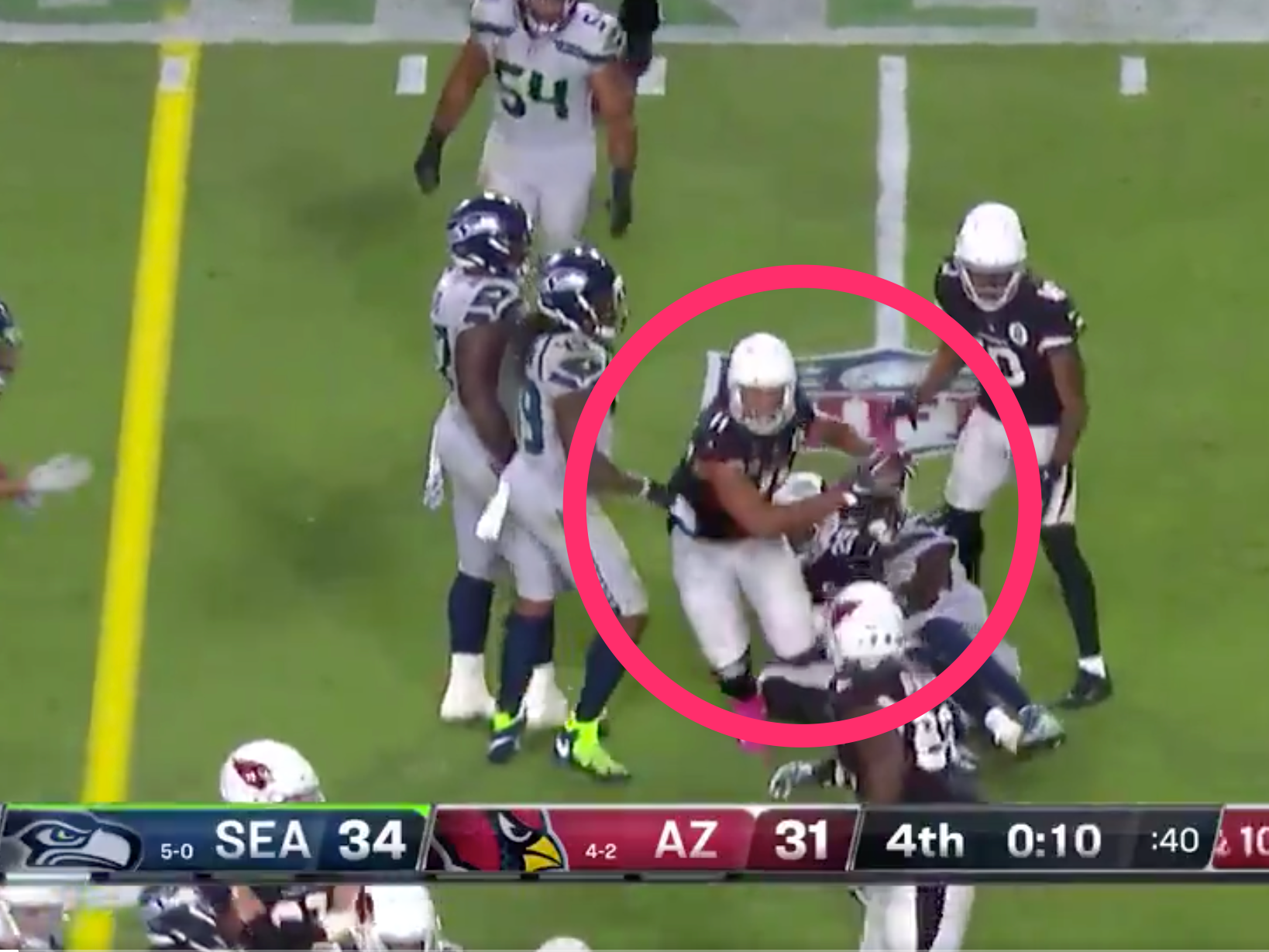 @thecheckdown / TwitterLarry Fitzgerald sprinting the ball back to a referee so that the Arizona Cardinals have time to spike the ball and stop the clock.

Larry Fitzgerald has learned a thing or two in his 17 years in the NFL with the Arizona Cardinals. On Sunday night against the Seattle Seahawks, the veteran’s instincts kicked in and helped save the game.

With seconds left in a tightly contested game against their divisional rivals, the Cardinals were trailing 34-31 and driving in hopes of attempting a game-tying field goal before the clock expired.

Throughout the drive, Fitzgerald made a point to sprint to the ball as soon as a play was whistled dead, grab it, and sprint back to the line to hand it off to the referee so the ball could be set and spiked, as the Cardinals tried to save the precious seconds they had.

At no point was Fitzgerald’s effort clearer than after the Cardinals’ final forward play of regulation. A 12-yard rush by running back Chase Edmonds put Arizona just outside the red zone and in position for the game-tying field goal, but just 12 seconds were left on a clock that the Cardinals couldn’t stop with a timeout.

Fitzgerald snapped into action, grabbing the ball and sprinting it to a referee so that it could be set. Cardinals quarterback Kyler Murray spiked the ball with two seconds left.

Fitz made sure the Cardinals hurried to the line to spike it ???? @LarryFitzgerald @AZCardinals

Arizona tied the game with a field goal and won in a dramatic overtime period, 37-34.

The heads-up play from Fitzgerald caught the attention of many football fans, but for Fitz it was just another day at the office.

As it turns out, Fitzgerald had played a similar role earlier in the season as the Cardinals tried to sneak an extra score before the end of the first half against the San Francisco 49ers.

Larry Fitzgerald is the world's greatest Fetcher Of Footballs When The Clock Is Running https://t.co/veH0yfBUt2

Fitzgerald earned praise from around the football world for his effort.

Without question my favorite part of an Arizona Cardinals hurry up is watching Larry Fitzgerald run the ball back to the officials. How is he always so close to the guy that has the ball?

Larry Fitzgerald undisputed GOAT at rushing the ball to the ref before a spike pic.twitter.com/KCo8mfXpbr

Seventeen years of experience pays off.