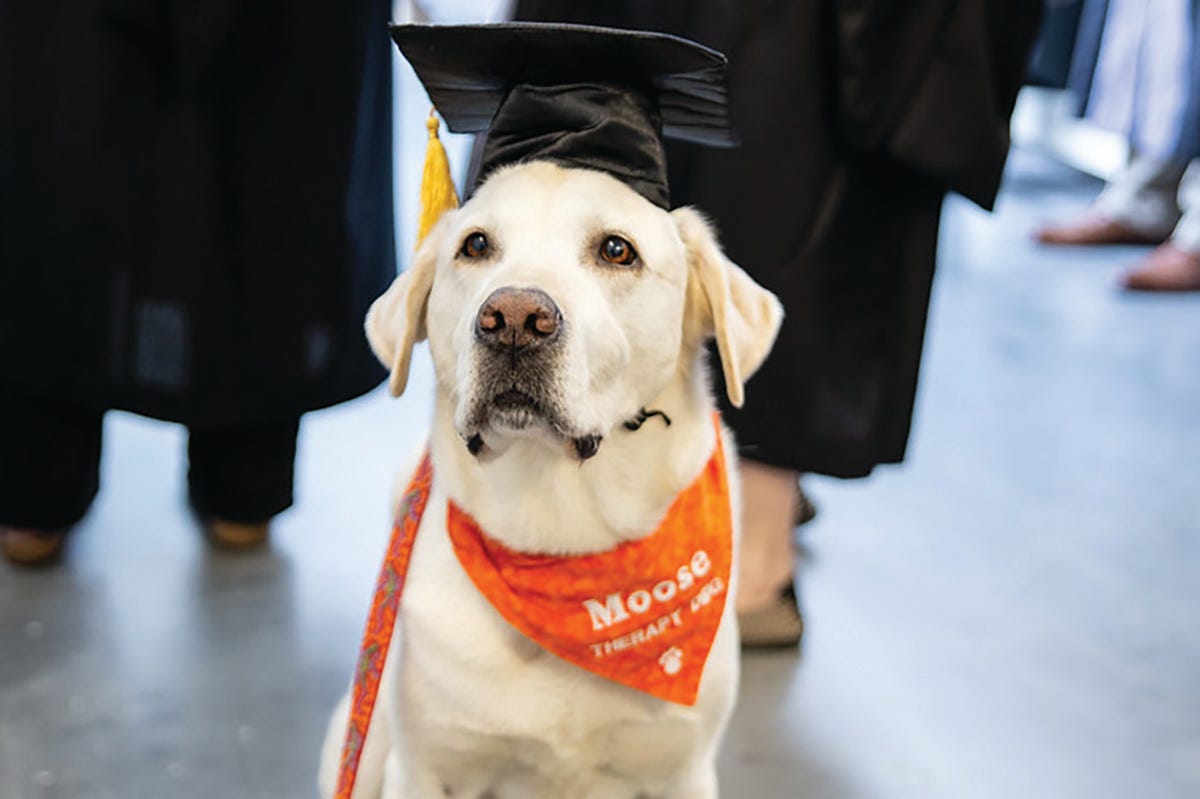 Trent DavisMoose has been working as a therapy dog at Virginia Tech’s Cook Counseling Centre for six years.

Just like a lot of universities around the world, Virginia Tech was forced to have a virtual commencement. 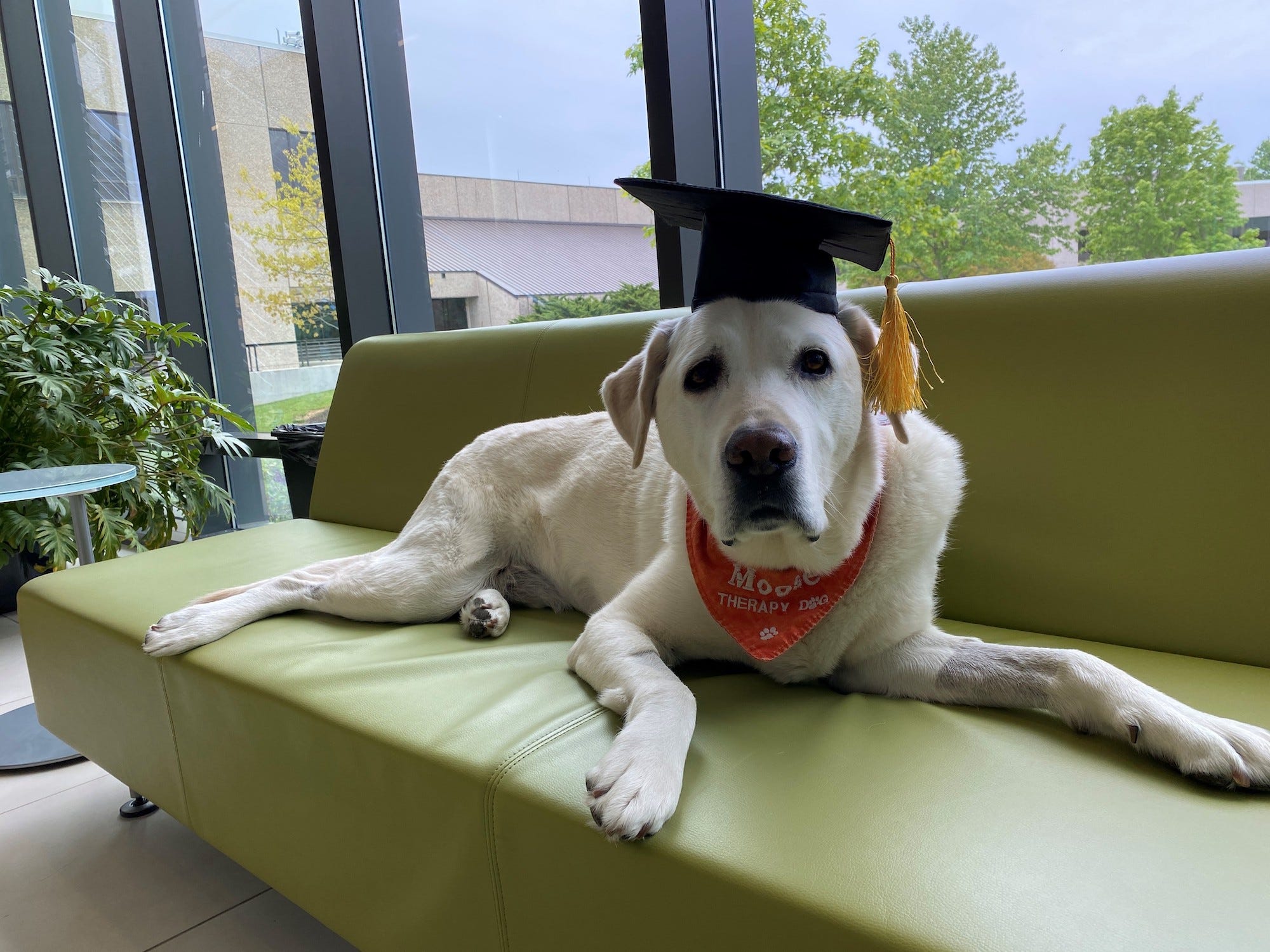 Moose, who has been working as a therapy dog at the Cook Counseling Centre on campus for six years, received his honorary doctorate in veterinary medicine on Friday.

During his time as a therapy dog, Moose has helped thousands of students, his owner and licensed counselor Trent Davis told Insider

“It was the right place at the right time because we wanted to honour his years of service,” Davis said. “To honour him knowing that his life span has been shortened by cancer. It’s not one of those where we say, ‘Well, we will wait another year and give him a degree then.'”

The cancer Davis is referring to is prostate cancer, which Moose was diagnosed with in February. The 8-year-old dog has been going through treatment ever since. Although his tumour has shrunk, Moose is still continuing his chemotherapy and will be on medicine for the rest of his life.

“We’re just trying to extend his life and quality of life, but right now he’s happy, playful and fully recovered from his treatments,” Davis said. “Enjoying life and not worried about a thing. I wish I was like him. He has a good prognosis but it’s one of those things that just is.” 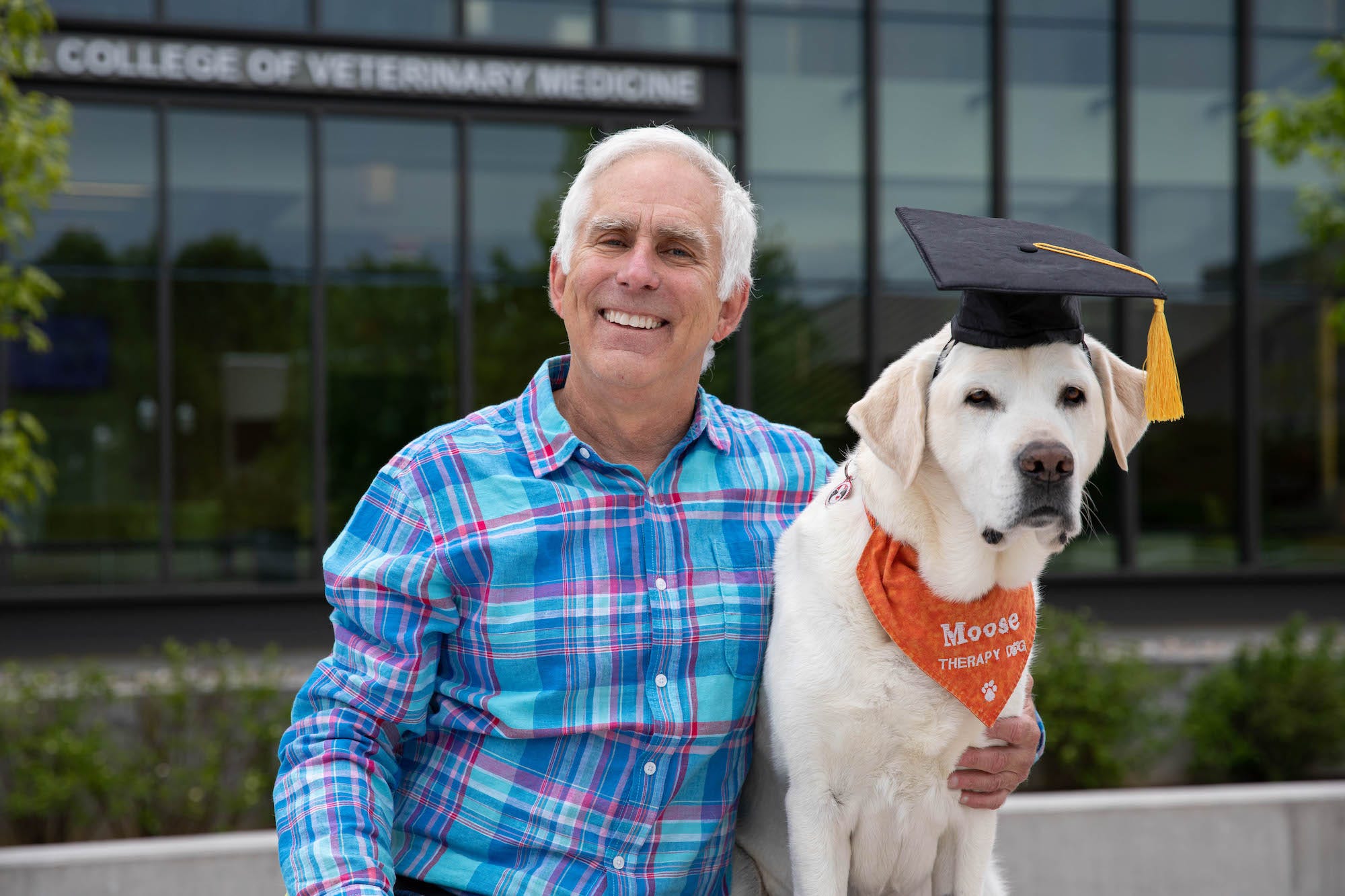 Trent DavisTrent Davis adopted Moose when he was about to turn 2.

Moose is actually one of four full-time therapy dogs that Davis and his colleagues work with at the counseling centre. Moose and his younger brother Derek live with Davis while the two others, Wagner and Carson, are staying with other colleagues.

To celebrate Moose’s honorary degree, Davis and the dogs watched the commencement when it went live

Davis said he texted his friends and family to tune in as well.

“They got lots of treats, which is all they really care about,” Davis said. “Some friends brought me treats and flowers to commemorate. We are still enjoying those treats!” 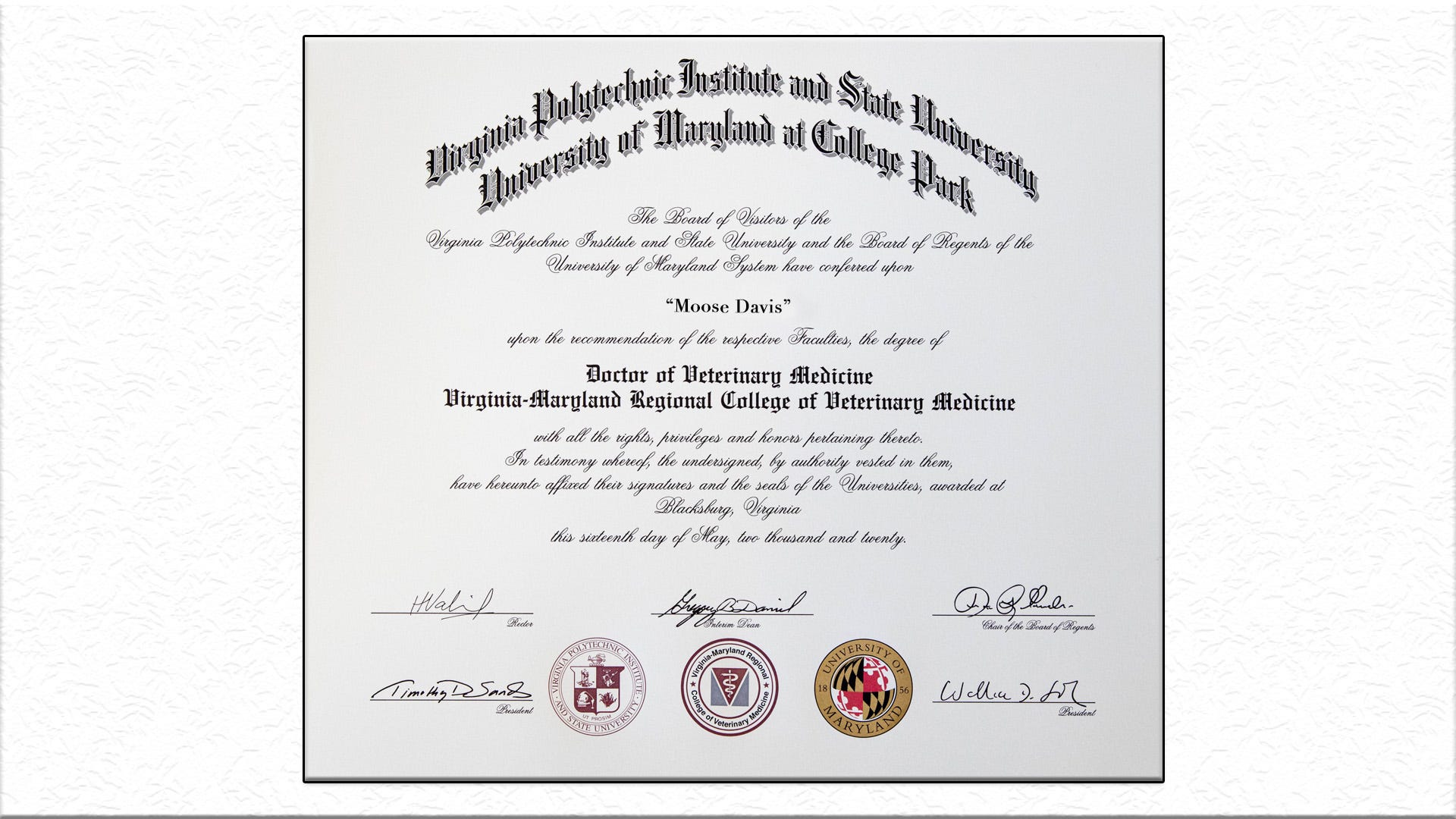 Before he was adopted by Davis, Moose was actually trained as a guide dog and autistic service dog in New York but was released because of medical issues.

“Moose is a very chill dog. He’s so chill that he’s never barked on the job,” Davis said. “No one at work has ever heard him bark. He really doesn’t get excited about a whole lot except food or toys.”

“I’ll take him to a football game and he doesn’t even flinch. He just keeps sleeping,” the owner added. “He’s a very composed, mature dog, and he’s becoming more that way as he ages.”

In 2019, he was named the Virginia Veterinary Medical Association’s 2019 Animal Hero. It’s an award “given to an animal that has performed a heroic act of service or provides daily outstanding service for humans,” according to Virginia Tech’s website. 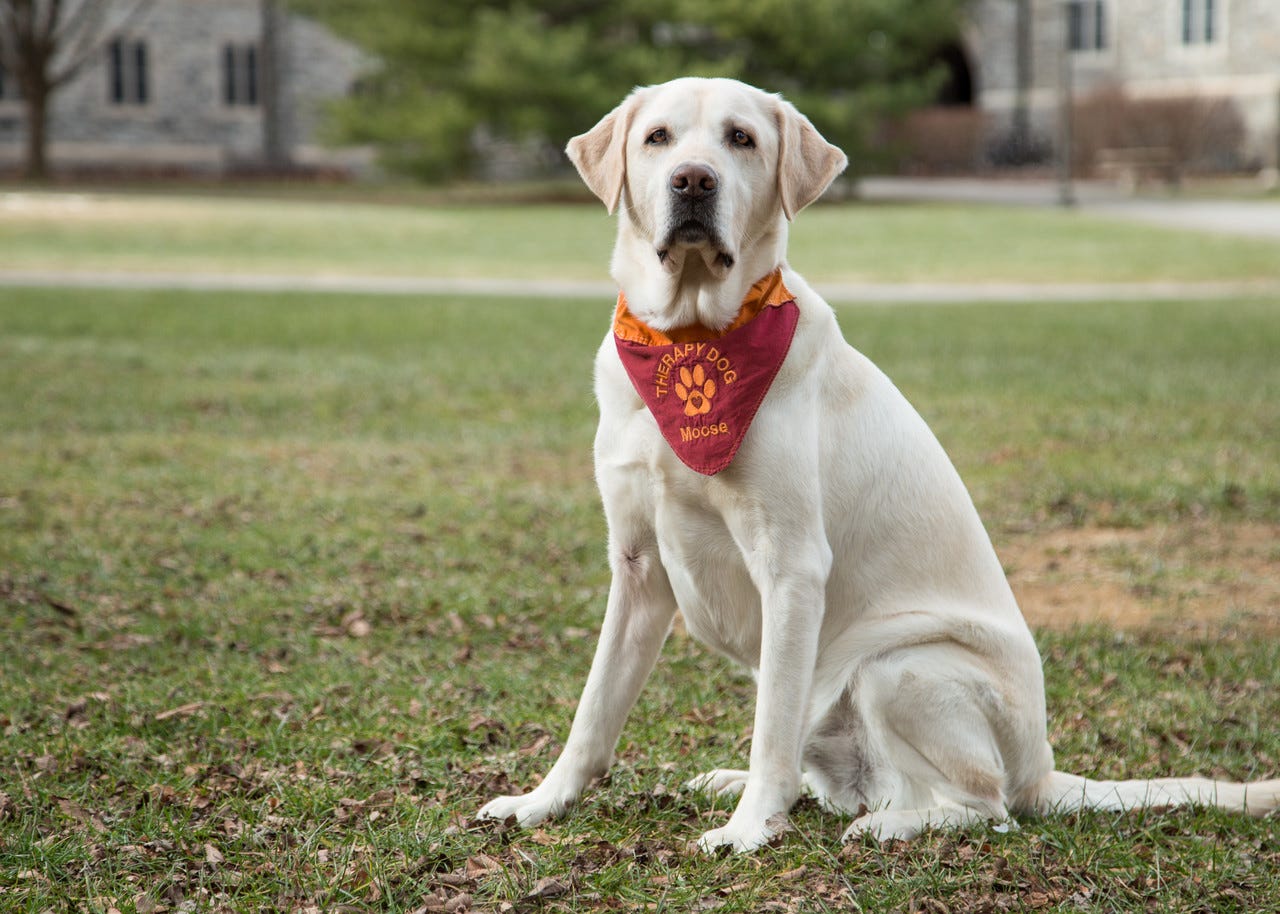 Davis hopes that aside from the honorary degree and the awards, Moose’s legacy is about how much he was able to help students.

“First off, I want to give Virginia Tech kudos for supporting me! The students have unconditionally loved it and benefited tremendously from it,” he said. “I want to inspire other people to move towards animal-assisted therapy and also to reduce the stigma around mental health and mental illness.”

“I want Moose to help make the world better,” Davis continued. “These dogs were built to serve and this is another way of serving.”