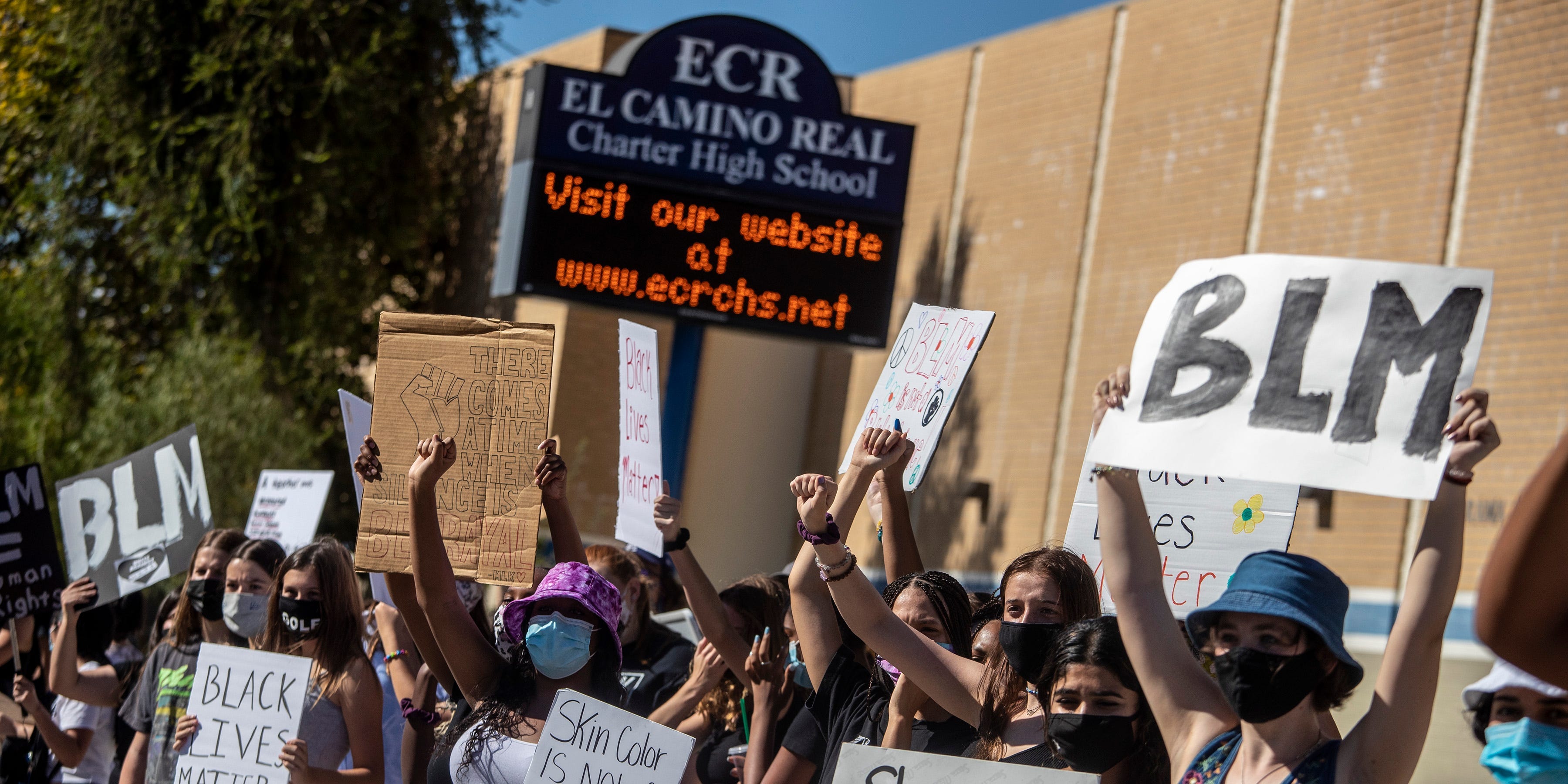 A high school teacher in Woodland Hills, California, said she was forced to flee from her home after she faced harassment for wearing a pro-Black Lives Matter t-shirt to class and planned to incorporate discussions about social justice movements in her teaching.

The teacher’s t-shirt, which she wore on the first day of virtual school, read “I can’t breathe,” the phrase that has become synonymous with the Black Lives Matter movement against racism and police brutality. The phrase on multiple occasions has been uttered by Black Americans just before they have been killed while in police custody.

The woman, who was not named in reports by several media outlets, citing fears of further harassment, is an English teacher at El Camino Real Charter High School in Woodland Hills, a city in Los Angeles County.

A parent of a student at the school had posted a picture of the teacher, alongside her email address, on his social media accounts because he had been unhappy his daughter was learning about social justice causes in her English class, according to a report from CBS Los Angeles.

Then, on August 16, Elijah Schaffer, a podcast host and social media personality, tweeted the photo of the teacher wearing the “I can’t breathe” shirt, which resulted in hundreds of threatening messages being sent to her inbox, the teacher said, according to CNN.

“A concerned father reached out to me because his daughter was not being taught English in her online English class,” Schaffer, the host of the podcast Slightly Offens*ve, tweeted.

Schaffer did not immediately return Insider’s request for comment on Sunday.

teaching her students about “racial injustice & fixing the corrupt system”

A concerned father reached out to me because his daughter was not being taught English in her online English class pic.twitter.com/EPiBU53Lzn

The local community has rallied behind the teacher, who said in an email to students she felt “abandoned” by school administrators

“The start of the school year with distance learning has been stressful and traumatic enough, but now this teacher has the stress and trauma of being attacked and harassed with hate speech and threats,” Cecily Myart-Cruz, president of the United Teachers Los Angeles union, told CNN. “This is absolutely unacceptable.”

According to the Los Angeles Times, the teacher had recently attended a school workshop about how to create an anti-racism curriculum.

“Please let other students know that the school has abandoned me, ironically after we had a whole day of professional development on how and why to create an anti-racist curriculum,” the teacher had written in an email to students, according to the LA Times, informing students she wouldn’t be in class.

David Hussey, the school’s executive director, told the LA Times that the teacher had been employed by the school for more than a decade and that she hadn’t broken any school policy by wearing the “I can’t breathe” shirt to teach students, though he said the policy was ambiguous.

“We’re going to have to reevaluate our policies,” he told the newspaper. “We’re in a new era now.”

He said the school had reached out to the teacher in an attempt to “help her and support her as best as we can,” the LA Times reported.

On Wednesday, around 100 students and community members showed up outside of the school to protest in support of the English teacher, according to the LA Times. Also Wednesday, hundreds of teachers in the Los Angeles Unified School District wore Black Lives Matter shirts in solidarity with the teacher, the LA Times reported.

“Simply saying Black Lives Matter is not enough: educators and administrators must actively show it in their work in creating and promoting anti-racist curriculum,” Myart-Cruz told CNN. “It is paramount that our educators are able to teach these subjects knowing they will have the support and protection of their administration.”

The teacher and her teenage daughter left their home due to the nature of some of the threats she received, and after someone had shared her address online, CBS LA reported. She also filed three restraining orders, according to the report, including one against the parent who initially shared her image and against Schaffer, the social-media personality.

“I can’t afford to go to a hotel and I can’t go home,” the teacher told the local CBS station. “My daughter’s a ninth-grader starting at this school. She wears a mask. We can’t stay in our home.”

A group of college Republicans is raising money for Kyle Rittenhouse, the gunman suspected of killing 2 people in Kenosha