NoahpinionIf you grew up in the 80s you probably remember Voltron. Although the show often had convoluted plotlines, it would somehow always end with Voltron (a super-powerful robot formed from five mechanical lions) facing off against a monster called a “Robeast”. Voltron had plenty of weapons, but he would invariably strike the killing blow with his “Blazing Sword”. Eventually the show became kind of routine, but to a four-year-old, it was pure gold.

In the econ blogosphere, a similar dynamic has played out over the last few years. Each week a Robeast will show up, bellowing predictions of inflation and/or soaring interest rates. And each week, Paul Krugman…I mean, KrugTron, Defender of the Blogoverse, will strike down the monster with a successful prediction of…low inflation and continued low interest rates. Goldbugs, “Austrians”, New Classical economists, and harrumphing conservatives of all stripes have eagerly gone head-to-head with KrugTron in the prediction wars, and have been summarily cloven in twain. 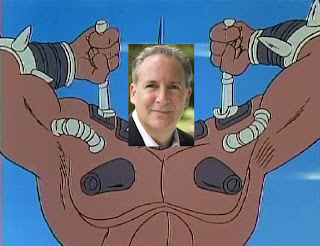 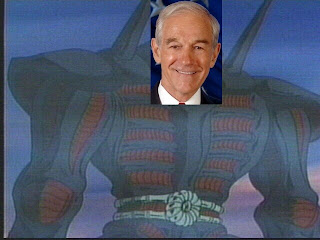 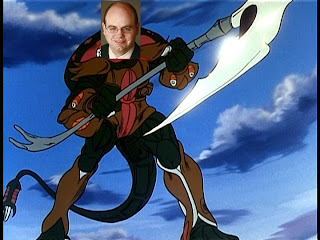 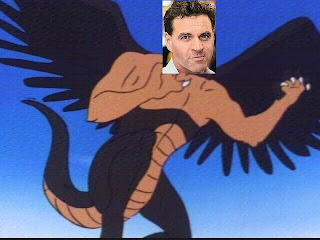 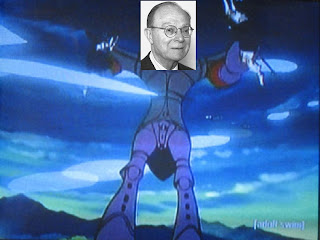 Krugman vs. a giant hive-mind of goldbugs 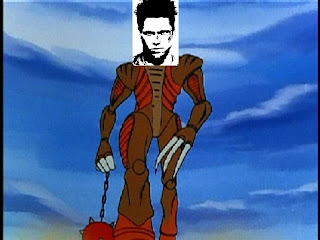 It’s really kind of amazing. And in case there was any doubt as to KrugTron’s prognosticatorial puissance, just ask the experts, who found that he pummelled all other punditsin prediction prowess, getting 14 out of 15 predictions right.

So it’s fair to ask: What is KrugTron’s Blazing Sword? How does he keep vanquishing the Robeast of the Week?

Well, Krugman himself will tell you that his secret weapon is simple, elementary Keynesian economics – a rough-and-ready IS-LM view of the world, backed up by sophisticated “liquidity trap” models like this one. In those models, low aggregate demand will always keep the economy trapped in a low-inflation, low-interest-rate world.

Keynesian models didn’t predict that unconventional monetary policy (QE2) would be insufficient to raise expectations of future inflation, and thus would be unable to bust us out of the liquidity trap. Nor did Keynesian models predict that private investors would be willing to ignore the possibility of a U.S. sovereign default, thus allowing the U.S. to avoid a spike in interest rates.

But Krugman did predict both of these things.

And here’s the most interesting one. Krugman’s earliest prediction victory came at the expense of John Paulson, one of history’s most successful investors (although unlike the Robeasts pictured above, Paulson didn’t seek out a battle with Krugman; he was set up as the anti-Krugman by a writer at Businessweek). In 2010, Paulson predicted a strong economic recovery. Such a recovery, if it had come, would have busted us straight out of the liquidity trap and allowed monetary policy to cause inflation. Paulson backed up his bet with billions, and rolled snake eyes.

But Paulson is no mere Robeast. He is no inflationista, “Austrian” econo-troll, or conservative ideologue. In fact, he has a large group of very skilled macroeconomists working for him. There is no way his team doesn’t know Keynesian econ backwards and forwards.

Nor does Keynesian theory, of the type used by Krugman, insist that an economy will remain mired in recession without a fiscal stimulus to prime the pump. Sure, somewhere out there, there are models in which the economy can fall into a bad equilibrium that requires fiscal policy to kick it out (in fact, Miles Kimball and Bob Barsky are building such a model, but they are severely late in publishing the working paper; so hurry up, guys!). But IS-LM and the Eggertsson-Krugman model don’t have this feature. In those Keynesian models, growth can recover on its own.

So how did Krugman know growth would be slow? He didn’t (I hope) put his trust in Reinhart and Rogoff’s assertion that growth is always slow after financial crises. Maybe he just assumed that the underlying drivers of aggregate demand are sluggish, but I think Paulson’s team could have done that just as easily.

No, I think Krugman’s real secret weapon is something else: Like Voltron before him, he’s borrowing heavily from Japan.

See, I myself am fairly agnostic about Keynesian ideas. But I’ve expected nothing but low growth, low interest rates, and low inflation since 2008 (though I haven’t been as confident about these things as Krugman, and am thus not in his class as a super-robot). I expected these things because of one simple proposition: We are like Japan.

Since its land bubble popped in 1990, Japan has had low inflation and low interest rates and low growth, even as government debt mounted and quantitative easing was tried. Paul Krugman was there. He watched Japan carefully, and he often states that it deeply affected his thinking. In fact, it might not be an exaggeration to say that watching Japan made Krugman the Keynesian he is today.

Meanwhile, the Robeasts have all used a different example to inform their understanding of the world: America in the 70s and early 80s. That was a time when government intervention in the economy (seemingly) led to high inflation. This taught generations of conservative economists, politicians, pundits, and regular folks that government intervention leads to inflation. And that if you wait long enough (or maybe enact the right structural reforms), growth will come back on its own.

But America 2008-present has not looked like America 1975-1985. It has looked like Japan, 1990-present. The proper comparison was across space, not across time. Assuming that other countries are fundamentally different than ours – that cultural differences, or institutional differences, etc. make cross-country comparisons utterly worthless – has proven to be a losing bet.

So if you want to get into the economic prediction game, and you don’t want to be sliced and diced by KrugTron’s Blazing Sword, but you can’t bring yourself to fully embrace Keynesianism, I have a suggestion: Take a good close look at Japan.

Meanwhile, the Austrians, goldbugs, and other assorted Robeasts will continue to provide us with our weekly entertainment.