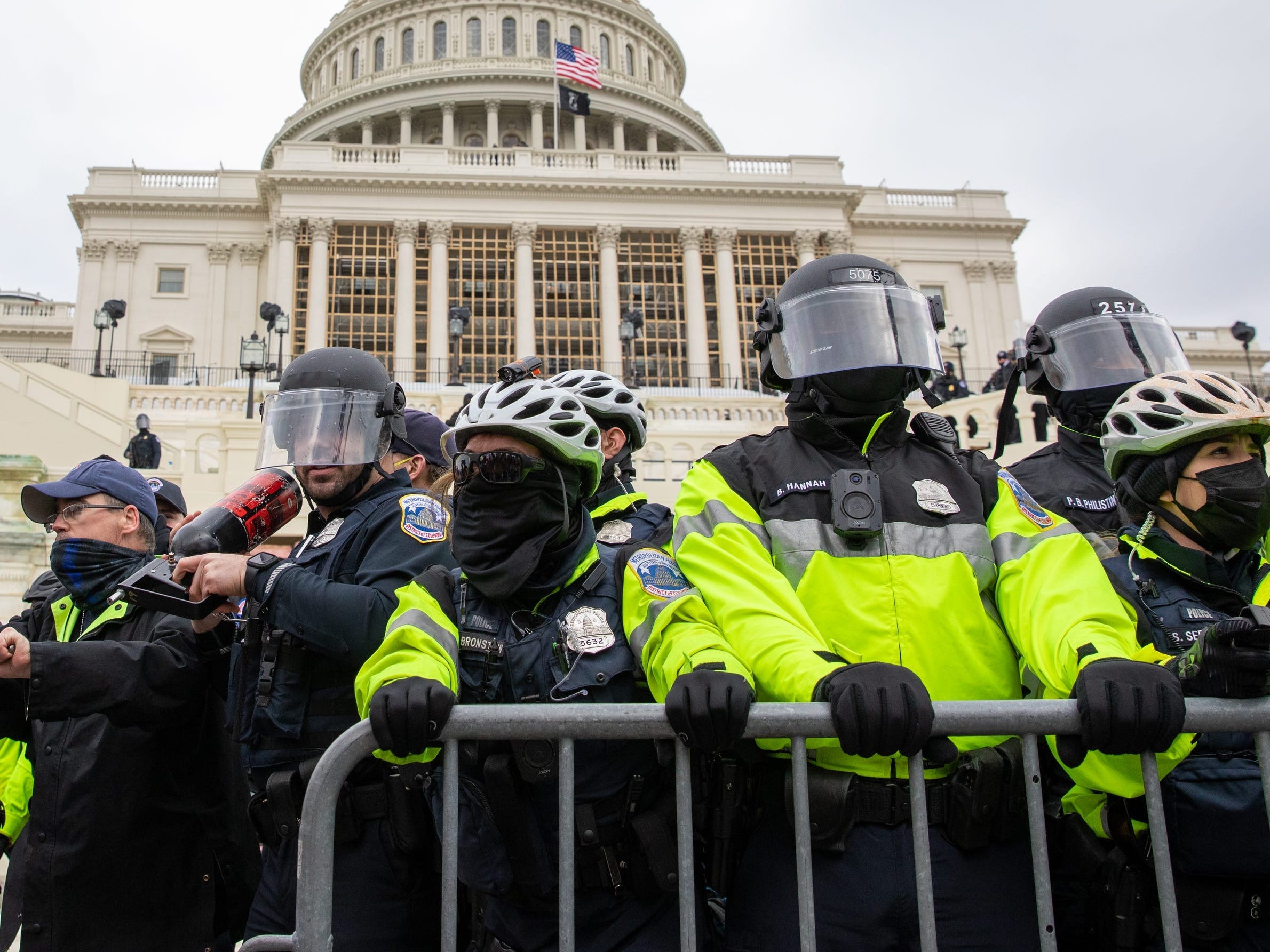 Amanda Andrade-Rhoades/For The Washington Post via Getty ImagesPro-Trump protesters clash with police during the tally of electoral votes that that would certify Joe Biden as the winner of the U.S. presidential election outside the US Capitol in Washington, DC on Wednesday, January 6, 2021.

A Kentucky state trooper has been reassigned after attending the January 6 pro-Trump rally in Washington, DC that turned into a deadly insurrection at the US Capitol.

The trooper attended the rally with his family and left before the rioting and attack on the Capitol began, a Kentucky State Police spokesperson told the Kentucky Herald-Leader. The spokesperson did not reveal the name of the trooper and said he was “temporarily reassigned” while the police force reviewed his conduct.

The riot began following a “Stop the Steal” rally, where President Donald Trump directed his supporters to fight for him and said Congress shouldn’t certify the electoral college votes in favour of President-elect Joe Biden, who won the 2020 presidential election. Trump has continued to deny the reality of his loss, for months calling the election “rigged,” although he conceded after the riot that a new administration would begin on January 20.

Wednesday’s attack left five people dead, including one member of the US Capitol Police.

“The horrific acts that took place last week on sacred national grounds are completely unacceptable,” Philip Burnett Jr., the acting Kentucky State Police commissioner, said in a statement. “KSP is reviewing the employee’s participation. It is the right thing to do to protect our nation, democracy, agency, and all KSP employees. This is the same review process our agency follows any time there is questionable activity involving any law enforcement personnel within our agency.”

The trooper is among several law enforcement officials reportedly involved in Wednesday’s events. A deputy sheriff in Franklin County, Kentucky, was also reassigned after participating in the rally. The New York Police Department said one of its members had a role and was under internal investigation.

Police departments in California, Texas, and Washington state are also among those investigating whether its members participated in the events.

Rep. Tim Ryan said Monday there were between 10 and 15 ongoing investigations into members of the Capitol Police over their conduct during the insurrection. Two have already been suspended, he said: One who took a selfie with an insurrectionist in a video that went viral during the event and another who gave a “tour” to the people who illegally entered the building. Ryan also said a third individual, who may have been a member of the Capitol Police or the National Guard, had been arrested.

The US Department of Justice said Tuesday that there were at least 160 ongoing federal investigations into people who participated in the riots, with more planned.