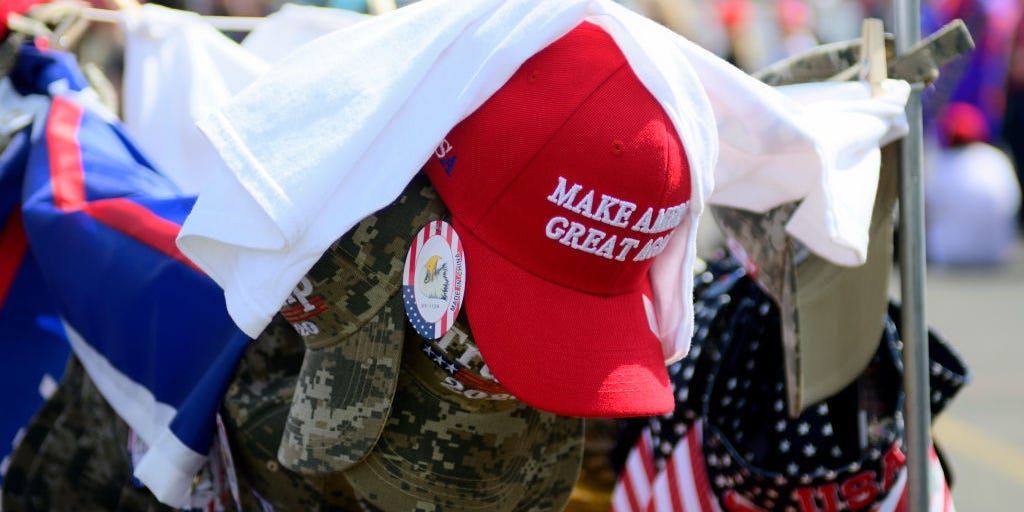 Bastiaan Slabbers/NurPhoto via Getty ImagesA red Make America Great Again hat sits atop of a rack with camouflage and patriotic hats at a Trump campaign rally in Montoursville, Pennsylvania, on May 20, 2019.

The owners of two restaurants in Louisville, Kentucky, announced that supporters of President Donald Trump can turn in their “MAGA” hats, flags, t-shirts, and other merchandise in exchange for free food.

As the Louisville Courier-Journal reported, the husband-and-wife owners of Six Forks Burger Company and Pollo â€” A Gourmet Chicken Joint announced in Facebook posts on Saturday their attempt to extend an “olive branch” to Trump supporters after the president lost in his bid for reelection.

The restaurant owners said in a post to Facebook they were “proud to say that we were in full support of Joe Biden and Kamala Harris’ campaign.”

“But, we feel compelled to extend an olive branch to those who support Donald J. Trump in his unsuccessful bid for re-election,” they added.

According to the Courier-Journal, patrons at Pollo can turn in their Trump swag for a free entree and side dish, while customers at Six Forks Burger Company can turn their swag in to receive “a free ‘lil cheeseburger and fries.”

In his victory speech delivered in Wilmington, Delaware, on Saturday, the president-elect called for unity and healing in the US following the divisive and heated race between him and Trump. The president, however, has refused to accept the outcome of the election, arguing â€” without evidence â€” widespread voter fraud, illegal ballots, and an effort by Democrats to “steal” the election.

“Once I had seen that Biden was the confirmed winner, I thought, all right, we got that part, but we’ve still got to figure out how to come together,” Troy King, who owns the restaurants with his wife, Selena Johnson, told the Courier-Journal. “It’s not going to make a difference to have Biden as president if we don’t work together.”

In a subsequent update to their Facebook post on Sunday, the restaurant owners said they had received at least one threat following their offer but decided to “double down.” While they had initially planned to extend the offer through Wednesday, they said it would be valid during the entire month of November.

No one had yet cashed in on their offer as of Monday, the couple told the Louisville Courier-Journal. Commenters on the restaurant’s Facebook pages were torn â€” with some praising the owners while others said they would never eat at the restaurants.

“We strongly feel now is the time to reach out to those who think differently than the other and we all come together and figure out as Americans what we want the future to look like,” the owners said on Facebook.