Kenosha sheriff took heat in 2018 after a no-mercy rant about a group of shoplifters who were Black: 'We need to build warehouses to put these people into it and lock them away the rest of their lives.' 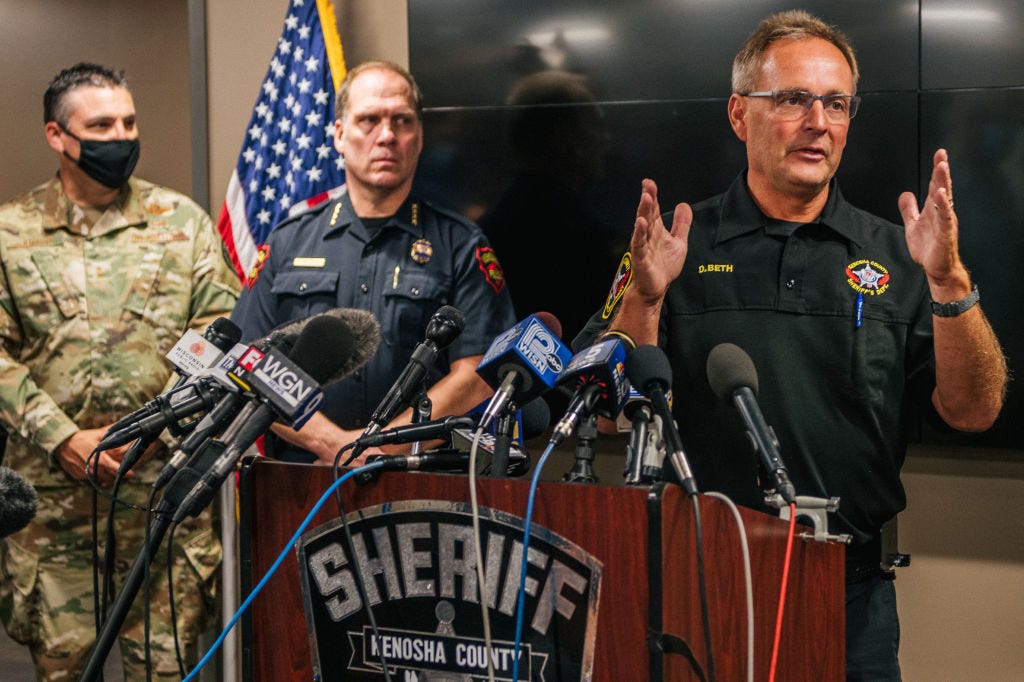 Kenosha, Wisconsin, is under a national spotlight as the latest epicentre of racial unrest following the police shooting of Jacob Blake on Sunday.

David Beth, the County Sheriff, has been working with local, state, and federal authorities to respond to areas where violence and destruction breaks out after organised demonstrations subside.

Those demonstrations in Kenosha, a city of 10,000 residents, followed similar displays as in Minnesota where George Floyd died at the hands of police in late May. Beth, though, came under fire in 2018 after he made comments about the arrest of five Black men and women that critics deemed racist.

Beth apologised for his comments, which were described at the time as “inexcusable,” but the video of his rant has now resurfaced, at a time of racial discord in his jurisdiction.

The Rev. Jesse Jackson played the video at a NAACP press conference in Kenosha on Thursday as an example of systemic racism.

The video, which was taken at a press conference about the shoplifting suspects, shows Beth flailing his hands as he describes locking people up without recreational time so they can’t procreate.

“Society needs to come to a threshold where we realise some people aren’t worth saving. We need to build warehouses where we put these people into it and lock them away for the rest of their lives,” he said. “Let’s stop them from truly – at least some of these males – going out and getting 10 other women pregnant and having small children.”

“At some point we have to stop being politically correct,” he added. I don’t care what race, I don’t care how old they are, if there is a threshold that they cross these people have to be warehoused.”

Beth’s comments were met with outrage from some members of the community, with at least one county official calling for his resignation.

A local school board member, who was running for Congress, said in a statement at the time that Beth’s “racist dog whistles were deafening.”

“It’s up to this county to decide if Sheriff Beth should remain or resign, but I’m calling on Sheriff Beth to resign immediately because no apology can undo the harm and division he has caused by his comments,” Cathy Myers said at the time.

After stark criticism, Beth met with the local NAACP and submitted an apology, the Milwaukee Journal Sentinel reported.

He said that he was upset by the incident, in which a 20-year-old Milwaukee woman allegedly led police and sheriff’s deputies on a chase, ran a red light and caused a crash involving two other vehicles, including one carrying a 16-year-old boy and his mother.

The suspects were found with more than $US6,000 worth of stolen merchandise, the paper reported at the time.

Beth said the crash reminded him of his daughter, who had recently obtained her driver’s licence.

“I should have kept my comments better directed toward the incident itself, and not allowed my emotions to get the better of me at the time,” Beth said in 2018.

Messages left for Beth and Myers were not immediately returned Wednesday. The Kenosha branch of the NAACP could not be reached.