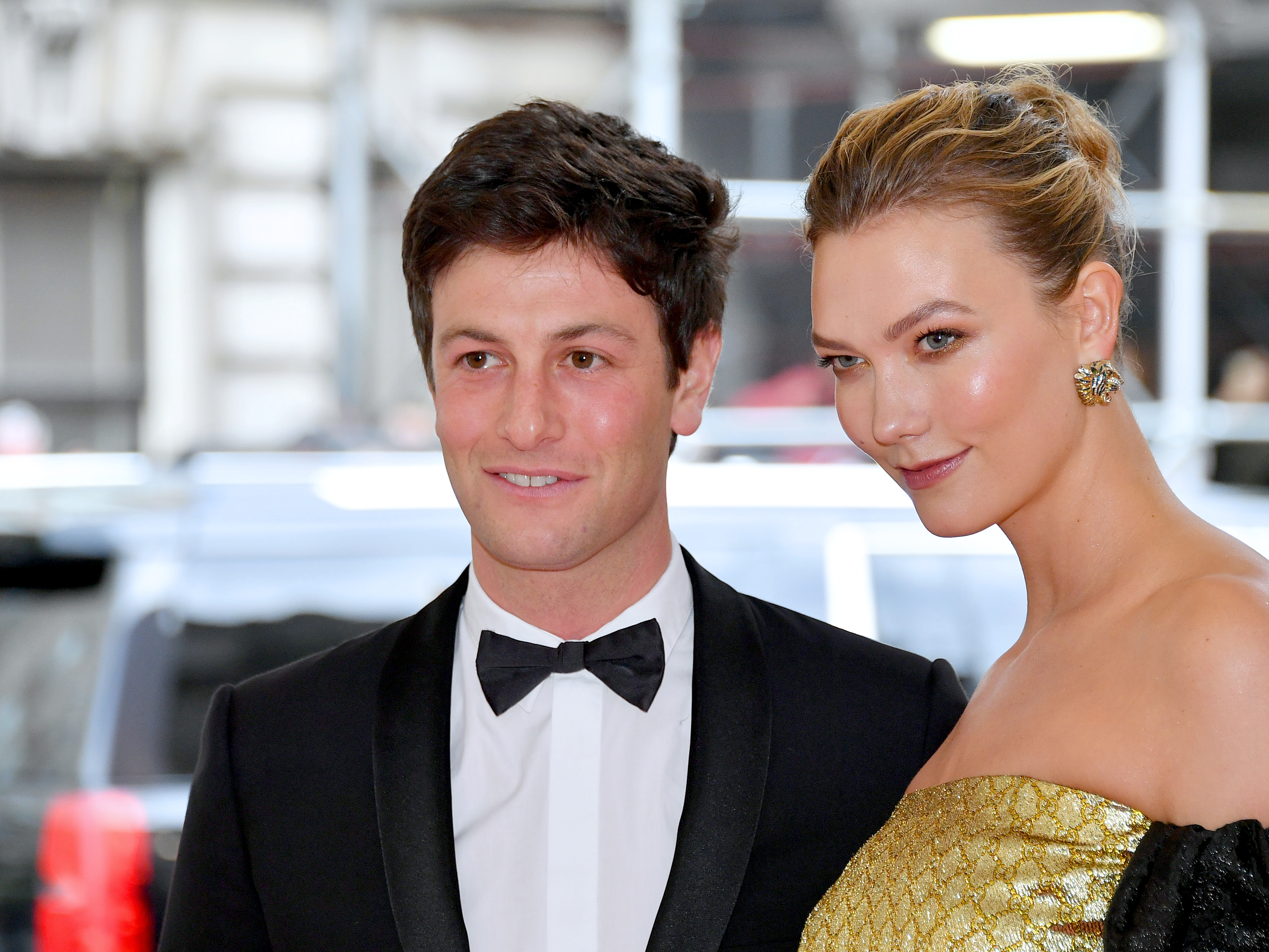 Model Karlie Kloss and venture capitalist Joshua Kushner may seem to be an odd pairing on the surface, but the two have now been together for eight years.

The couple has kept their relationship under-the-radar since they first started dating in 2012. Kloss and Kushner got married in October 2018, and held a second western-themed wedding just eight months later.

Kushner also happens to be the younger brother of White House adviser Jared Kushner – whose father-in-law is President Donald Trump. Although the couple hasn’t publicly spoken out against him, the couple has said they didn’t vote for him in the 2016 election.

Here’s a look at the relationship between Joshua Kushner and Karlie Kloss, including their ties to President Donald Trump:

This is an update to a story originally published in March 2018.

Josh Kushner, 34, founded a venture capital firm in 2009 called Thrive Capital. The firm has invested in companies like Instagram, Stripe, and ClassPass. Because of his investments, Kushner sits on the boards for shaving product maker Harry’s and wedding planning platform Zola.

Thrive Capital has made some of its biggest investments in tech startups like grocery delivery service Instacart, stock-trading app Robinhood, and insurance company Lemonade.

Oscar, which aims to use tech to provide a more consumer-friendly insurance option, was last publicly valued at $3.2 billion. The company secured $375 million from Alphabet, Google’s parent company, in 2018.

Meanwhile, Cadre is valued at $800 million. Kushner founded it with his brother, Jared.

Meanwhile, the 27-year-old Karlie Kloss has been working as a model since her teenage years. Kloss skyrocketed to prominence at age 15 in 2007, and now brings in upwards of $10 million a year. She also runs a free coding camp for girls.

In 2015, Kloss started Kode With Klossy, a charity that encourages girls to get involved in coding and tech.

Kloss and Kushner have been dating since 2012. It’s not clear exactly how the two met, and the high-profile couple have tried to keep their relationship relatively private.

Kushner was first spotted on Kloss’ arm at a Victoria’s Secret Fashion Show after party in 2012, Us Weekly reported.

Kloss rarely shares photos of Kushner on Instagram, where she has more than 8.6 million followers. Kloss has shared photos of the couple traveling the world and in honor of Kushner’s birthday.

“I know in my life what really matters to me,” Kloss said in an interview in April 2018. “I’m not trying to hide that from the world. I just really like having a more private life.”

In 2013, Kloss said she appreciates Kushner is “so not in fashion” in an interview with People.

“It’s really refreshing to leave all the fashion shows and shoots and chaos totally behind,” Kloss told People.

In a rare comment about their relationship, Kloss told Elle in 2016 that the couple doesn’t have a “no phones in the bedroom” rule, although the model tries to digitally detox once a week.

The couple has largely avoided talking about politics, which is notable given their ties to that world: Josh Kushner is the younger brother of Jared Kushner, a senior White House advisor and son-in-law to President Donald Trump.

The Kushner brothers teamed up to found Cadre back in 2015. Josh Kushner told Forbes in April 2017 that he and his brother spoke every day, but refused to comment for an Esquire article about Jared Kushner in 2016 because he “did not want to say anything that might embarrass him.”

However, the couple has publicly stated they didn’t vote for Trump in 2016. Kushner has said he’s a lifelong Democrat, and Kloss posted she had voted for Hillary Clinton in the 2016 election.

Kloss posted a photo of herself on Instagram in November 2016 filling out an absentee ballot. She included the hashtag #ImWithHer in support of Clinton.

“It is no secret that liberal values have guided my life and that I have supported political leaders that share similar values,” Joshua Kushner told Forbes in 2017.

In a 2018 interview with Vogue, Kloss made it clear she doesn’t agree with the Trump family’s conservative political views. “At the end of the day, I’ve had to make decisions based on my own moral compass … I’ve chosen to be with the man I love despite the complications.”

Kloss also pointed out the sexism in the questions she’s frequently asked about her relationship with Kushner.

“It’s frustrating, to be honest, that the spotlight is always shifted away from my career toward my relationship,” Kloss told Vogue. “I don’t think the same happens in conversations with men.”

Neither Kushner nor Kloss were present at Trump’s inauguration in 2017. Instead, Kushner was spotted at the Women’s March in DC that weekend.

Kushner told other marchers he was there to observe, The Washingtonian reported.

While Kloss wasn’t in attendance, she posted a photo from the same Women’s March, along with an Audre Lorde quote: “Women are powerful and dangerous.”

Kloss and Kushner have also showed their support on social media for gun control. The couple was spotted in March 2018 at the anti-gun-violence March for Our Lives protest in DC.

Kloss and Kushner didn’t hide their presence at the march: They postedphotos from the March for Our Lives rally on social media. A few weeks earlier, Kushner made a $50,000 donation to the anti-gun-violence group.

While President Trump is unpopular in Silicon Valley, it doesn’t seem like Kushner’s proximity to the White House has slowed down his career as an investor in a meaningful way.

“There is a lot of discussion in the Valley about political tests on both who you’ll take money from and who you’ll work with,” the venture capitalist Marc Andreessen told Forbes in 2017. “Having said that, I haven’t yet seen an instance of anyone hesitating to take money from Josh because of the affiliation with his brother.”

In July 2018, Kloss and Kushner got engaged after six years of dating. Kushner reportedly proposed “during a romantic weekend together in upstate New York,” People reported at the time.

I love you more than I have words to express. Josh, you’re my best friend and my soulmate. I can’t wait for forever together. Yes a million times over ???? pic.twitter.com/pDUrQt3kku

“They’re both overjoyed and happily celebrating. Their hearts are full and they’re excited to build their future together,” a source told People at the time of the engagement.

Kloss converted to Judaism shortly before getting engaged to Kushner, who is Jewish. Kushner’s parents “spoke horribly” about Kloss behind her back, and refused to meet her or invite her to family gatherings until after she converted to Judaism, according to an expose published by CNN reporter Vicky Ward.

Kloss confirmed she had converted to Judaism in a March 2019 interview.

The couple got married in October 2018 in upstate New York. The wedding was a small Jewish ceremony with less than 80 people in attendance.

“The wedding was intimate and moving,” a friend at the ceremony told People. “The couple was beaming with happiness.”

Jared Kushner and his wife, Ivanka Trump — the daughter of President Trump — attended the couple’s wedding.

So much love for you both as you begin forever together. ❤️ https://t.co/8lYSGrKpVu

“So much love for you both as you begin forever together,” Ivanka Trump tweeted.

At the time of the first wedding, People reported the couple would have a “larger celebration for friends and loved ones” in the spring. In June 2019, the couple had their second wedding celebration — at a ranch in Wyoming.

The wedding was held at Brush Creek Ranch, an “all-inclusive ranch resort” near the Wyoming-Colorado border.

Photos shared from the wedding show that guests were decked out in western-themed outfits instead of traditional gowns and tuxedos. Attendees at the Wyoming wedding included designer Diane Von Furstenberg, and celebrity couple Orlando Bloom and Katy Perry.

wonderful weekend of being love and celebrating love, congrats to a beautiful union @karliekloss @joshuakushner ❤️

No word on whether Kloss’ best friend Taylor Swift was in attendance, although none of the photos Kloss posted show the singer.

The relationship between Kloss and Kushner was publicly flamed on a recent episode of “Project Runway,” the reality show about a fashion design competition that Kloss hosts.

“Not even to dinner with the Kushners?”#ProjectRunwaypic.twitter.com/O9qJbrC2ZN

A judge on the show criticized one of the contestants’ looks, which was designed for Kloss to wear to a fashion event in Paris. The judge told the designer he couldn’t see Kloss wearing the outfit “anywhere.”

“Not even to dinner with the Kushners?” the contestant replied.

“Keep it to the challenge,” Kloss responded. “You really missed the mark here, on all accounts.”