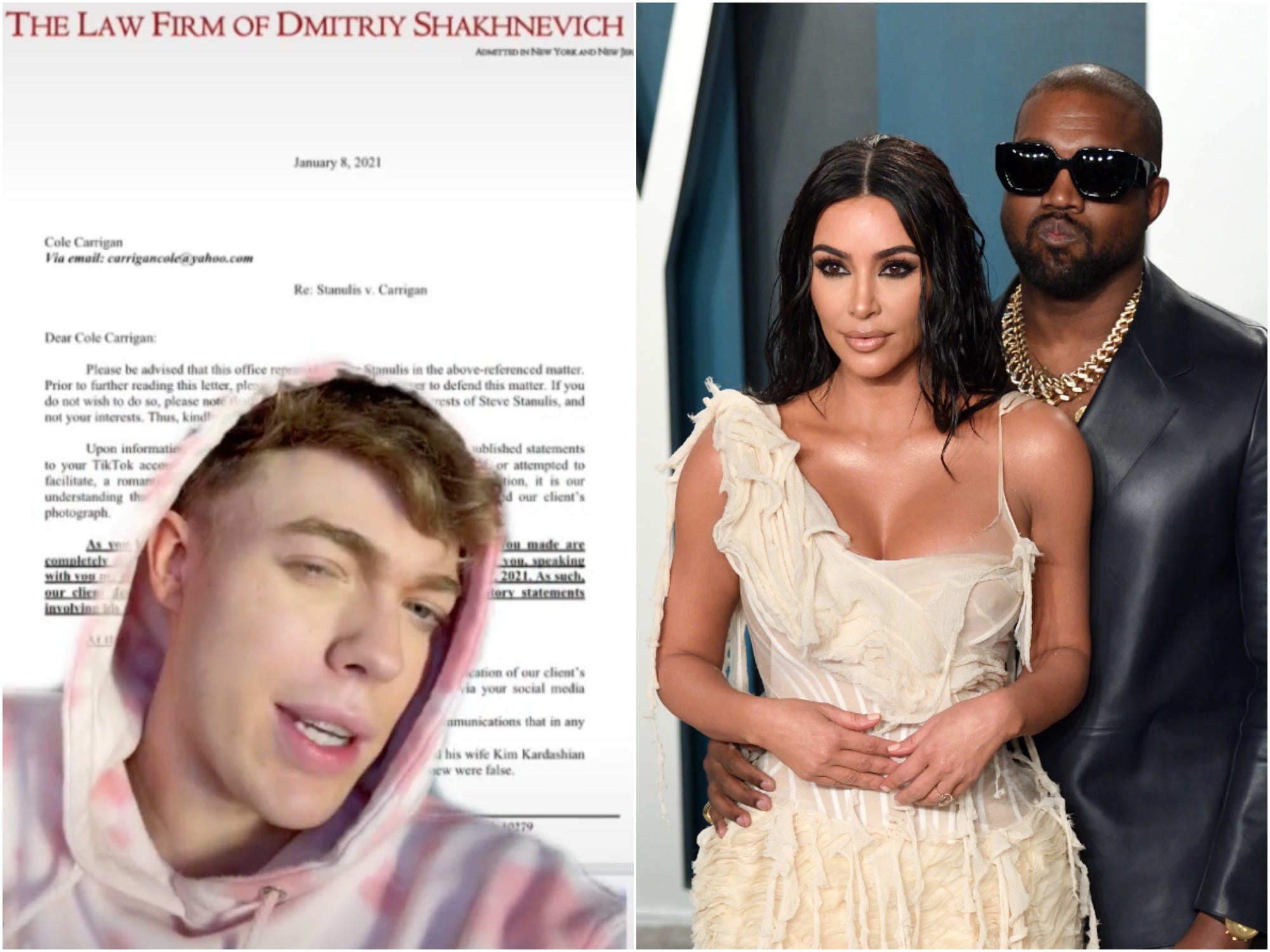 Cole Carrighan / TikTok, Karwai Tang / Getty ImagesCole Carrigan has apologised for claiming he met up with Kanye West at a W Hotel.

Carrigan implicated West’s bodyguard Steve Stanulis, who he claimed arranged a meeting for him and the rapper at a hotel in November.

Carrigan, who has nearly 350,000 TikTok followers, posted a video on Friday with alleged screenshots of a conversation between him and Stanulis arranging the meet-up. His story came amid a flurry of bizarre, unfounded rumours about West cheating on Kim Kardashian West with YouTuber Jeffree Star last week.

Carrigan posted a follow-up video a day later where he went through the alleged conversation, claiming that Stanulis had reached out to him a few months after he’d attended a party with them both, and asked him to sign an NDA. He included a photo as apparent confirmation that he was at a W Hotel in November, where the meeting was supposed to have happened.

On January 11, Carrigan posted a third TikTok with a cease and desist letter in the background from law firm of Dmitriy Shakhnevich. In an email to Insider, the law firm confirmed the authenticity of the letter.

“It says here in order to for me to stay out of court and not get sued, I have to issue an apology to Mr. West and Kim Kardashian West,” Carrigan said in the TikTok. “So hi, Kim, if you’re watching this, I am so sorry, I honestly did this for the simple fact that your husband voted for Trump, and we simply can’t have that clownery in America, so you’re welcome.”

In 2016, West made waves when he endorsed Trump during a concert. He would go on to be supportive of Trump throughout his presidency before disavowing him and launching his own failed presidential campaign. In a July 2020 Forbes interview, West claimed he didn’t actually vote in the 2016 election. In 2020, he said that he voted for himself.

Stanulis told PageSix that he hasn’t worked for West since 2016, and has never heard of Carrigan. His lawyer told PageSix the allegations were “completely and entirely false,” and he “denies, in the strongest terms, all of these false and defamatory statements.”

It is worth noting that Carrigan first made claims about him and West in a duet with influencer Ava Louise, who first planted the seed on the internet that West had been “hooking up with a very famous male beauty guru” after it was announced West and Kardashian West were getting a divorce.

The theory that the person in question was Jeffree Star then spread like wildfire, because the mogul has recently moved to Wyoming â€” the state where West has been staying during his separation from Kardashian West.

Star denied the rumours, and Louise has since freely admitted to making the entire scandal up, saying there was “literally not one bit of truth to anything” she said in the TikTok.