The most expensive home in Kansas is a mansion with scuba tunnels and a waterfall — and it's selling for almost $11 million. Take a look inside. 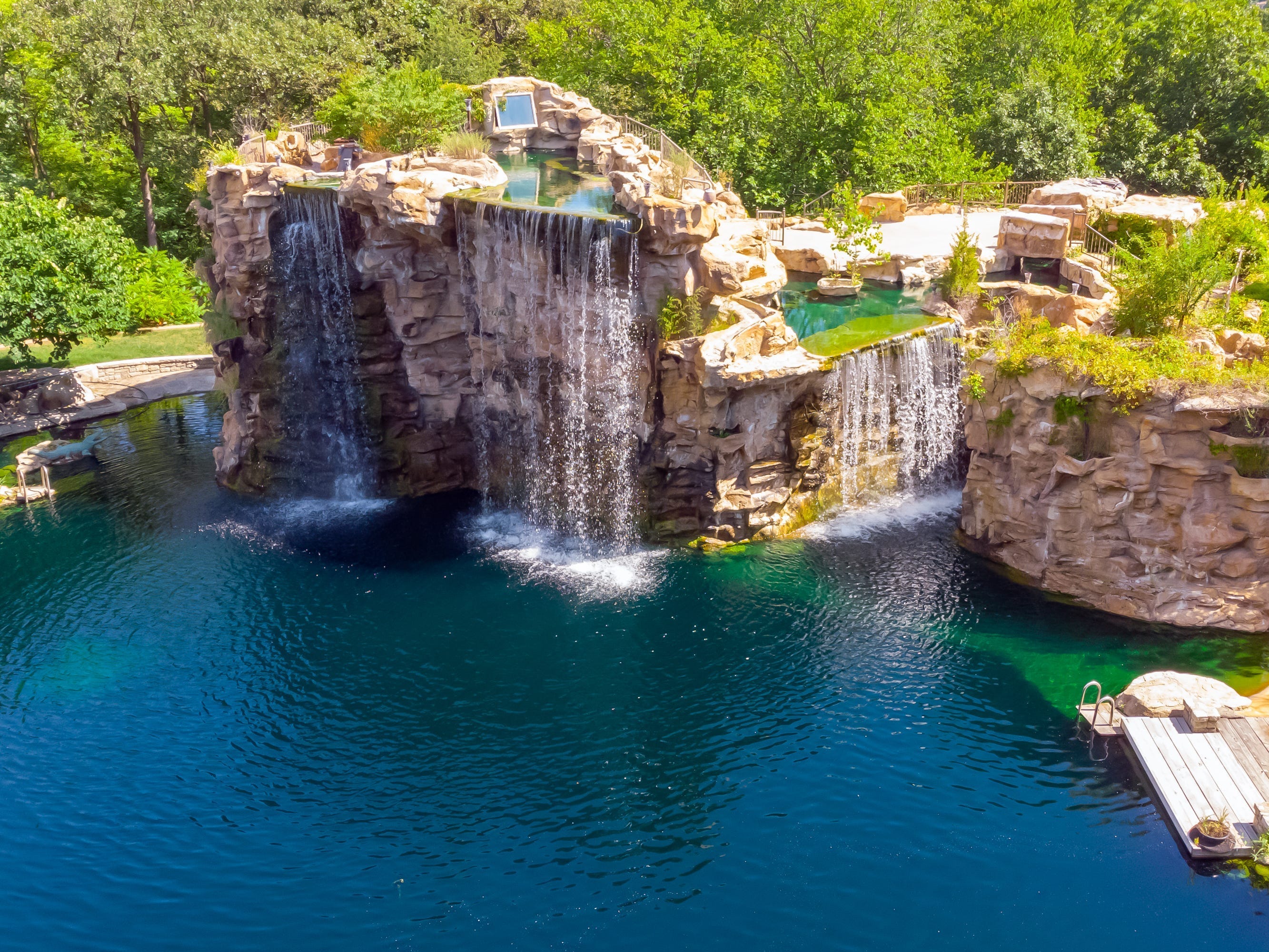 The most expensive house in Kansas is on the market for $US10.9 million, local news outlet KCTV reports. The sprawling estate, located on 17,000 square feet in the Greater Kansas City area, is known as “The Spirit of Avalon.”

The pricey home is spacious, with seven bedroom ad seven bathrooms. It’s also filled with luxe amenities, including a commercial-grade kitchen, a library, and a 4-car attached garage. But what really sets the home apart are its more unique features â€” namely, scuba diving tunnels and a waterfall.

Forbes reports that late natural gas executive and scuba lover Dennis Langley (who once served as the speechwriter for President-elect Joe Biden) and his wife, Lyn, built the house and its various add-ons.

Per Zillow, the home has been on the market since at least September 2019, when it was listed for $US11.8 million. The asking price was cut to $US10.9 million in July.

“The Spirit of Avalon” is a sprawling estate located in the Greater Kansas City area. It sits on over 17,000 square feet of land, according to the listing. 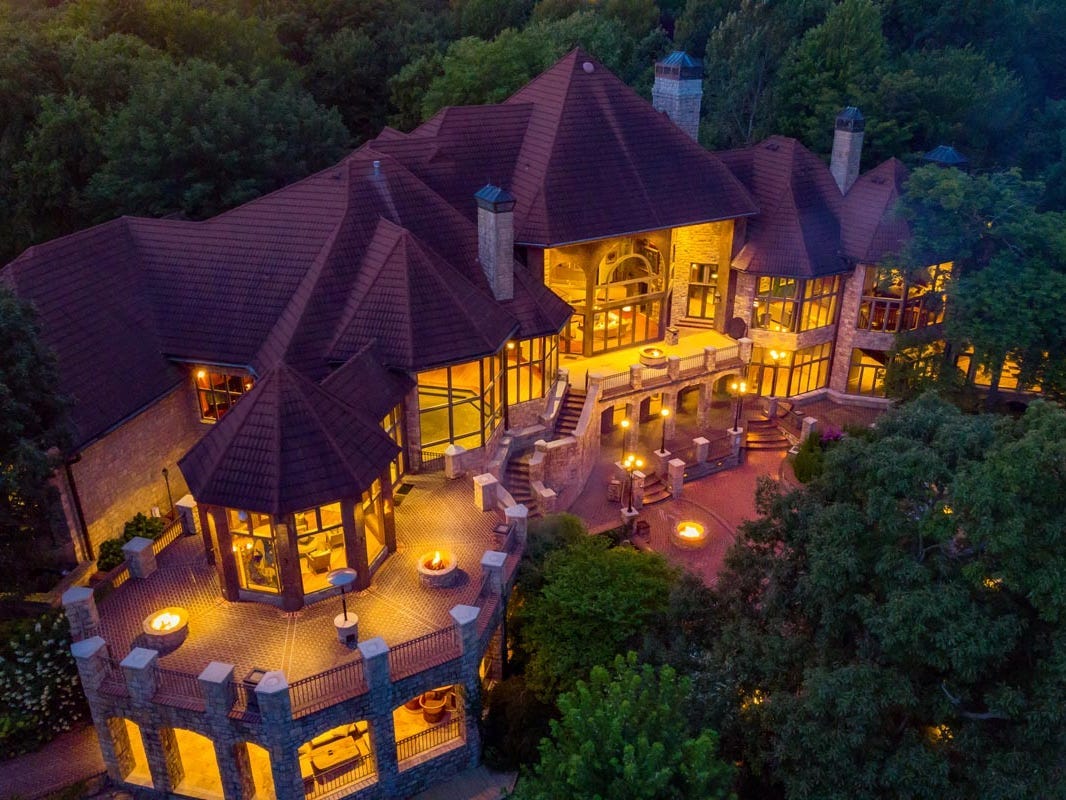 The Perfect SpotThe ‘Spirit of Avalon.’

Per Forbes, the late natural gas executive Dennis Langley and his wife Lyn built the house. Langley also once worked as a speechwriter for President-elect Joe Biden. 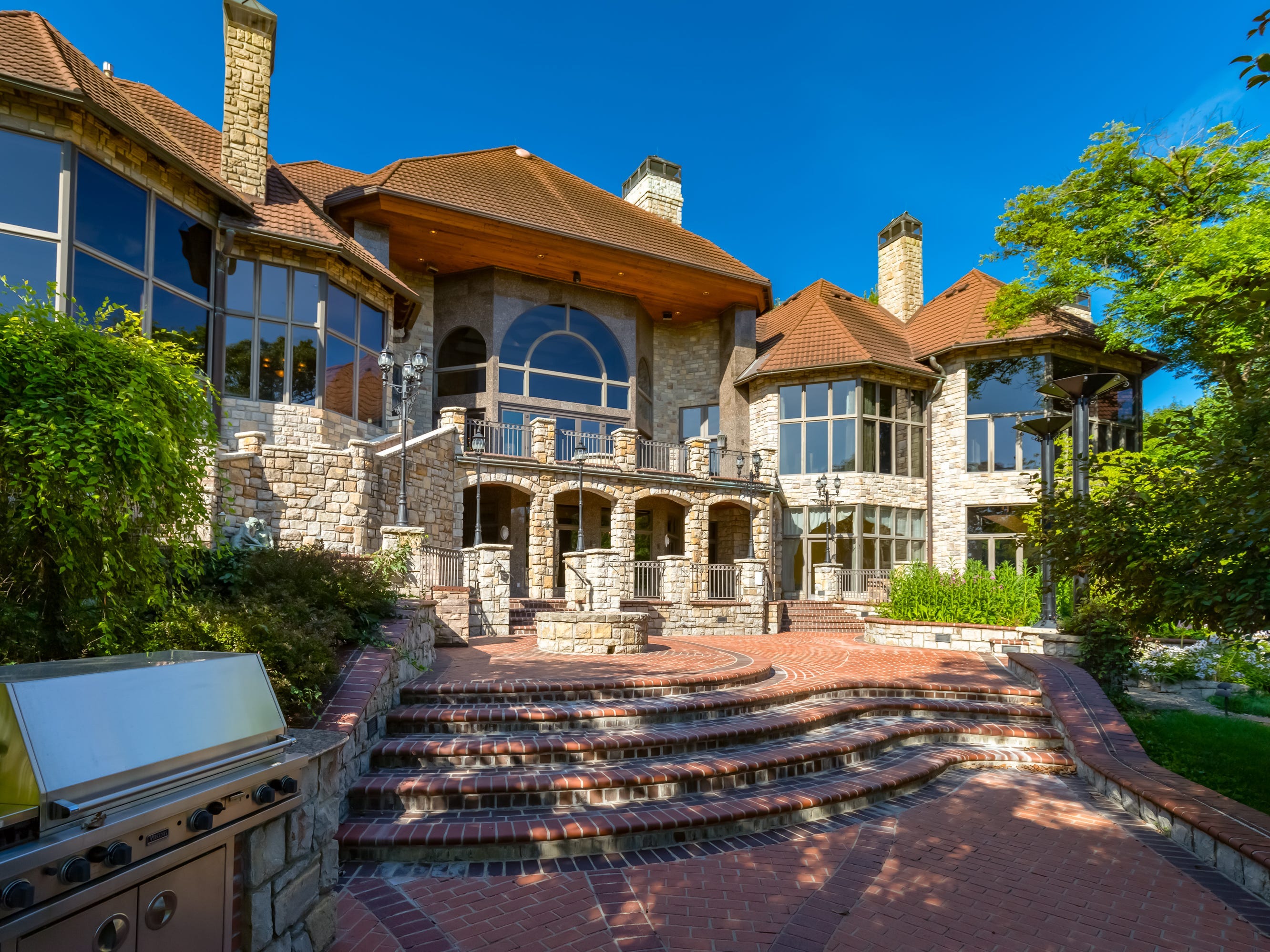 The Perfect SpotAn exterior shot of the home.

Local news outlet KCTV called the Spirit of Avalon “the most expensive home” in the state. The typical home in Kansas is valued at $US165,364, per Zillow’s latest estimates. 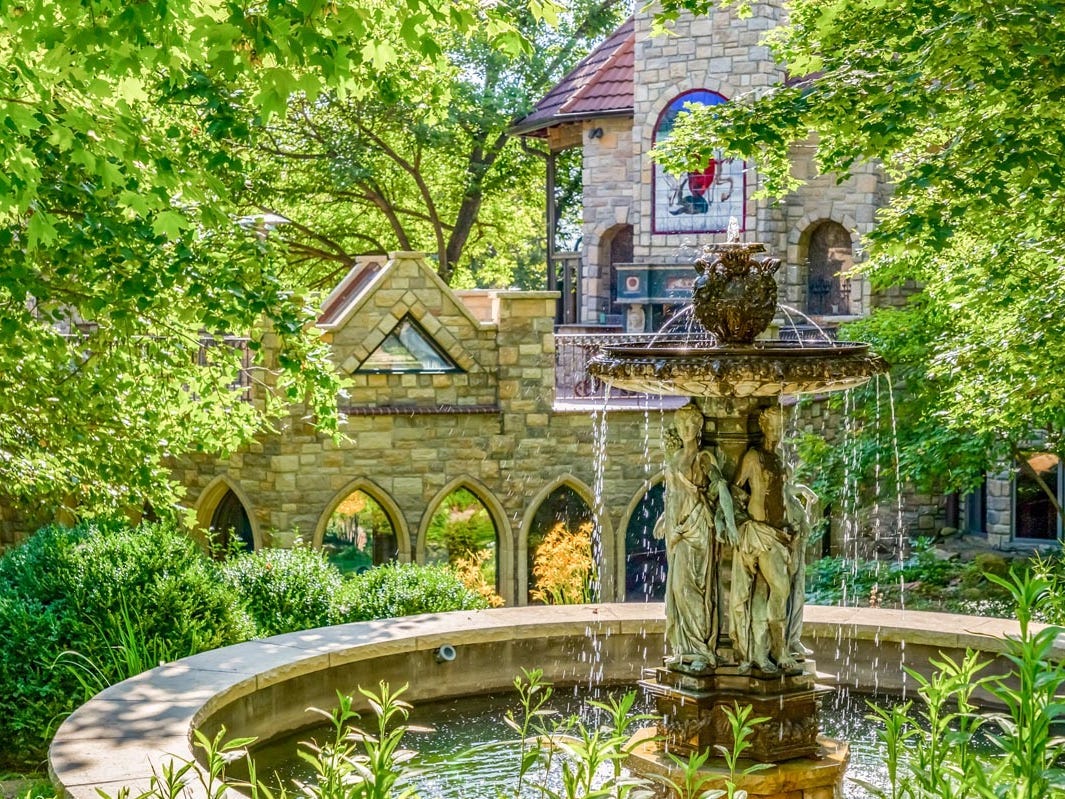 The Perfect SpotA waterfall on the grounds around the house. 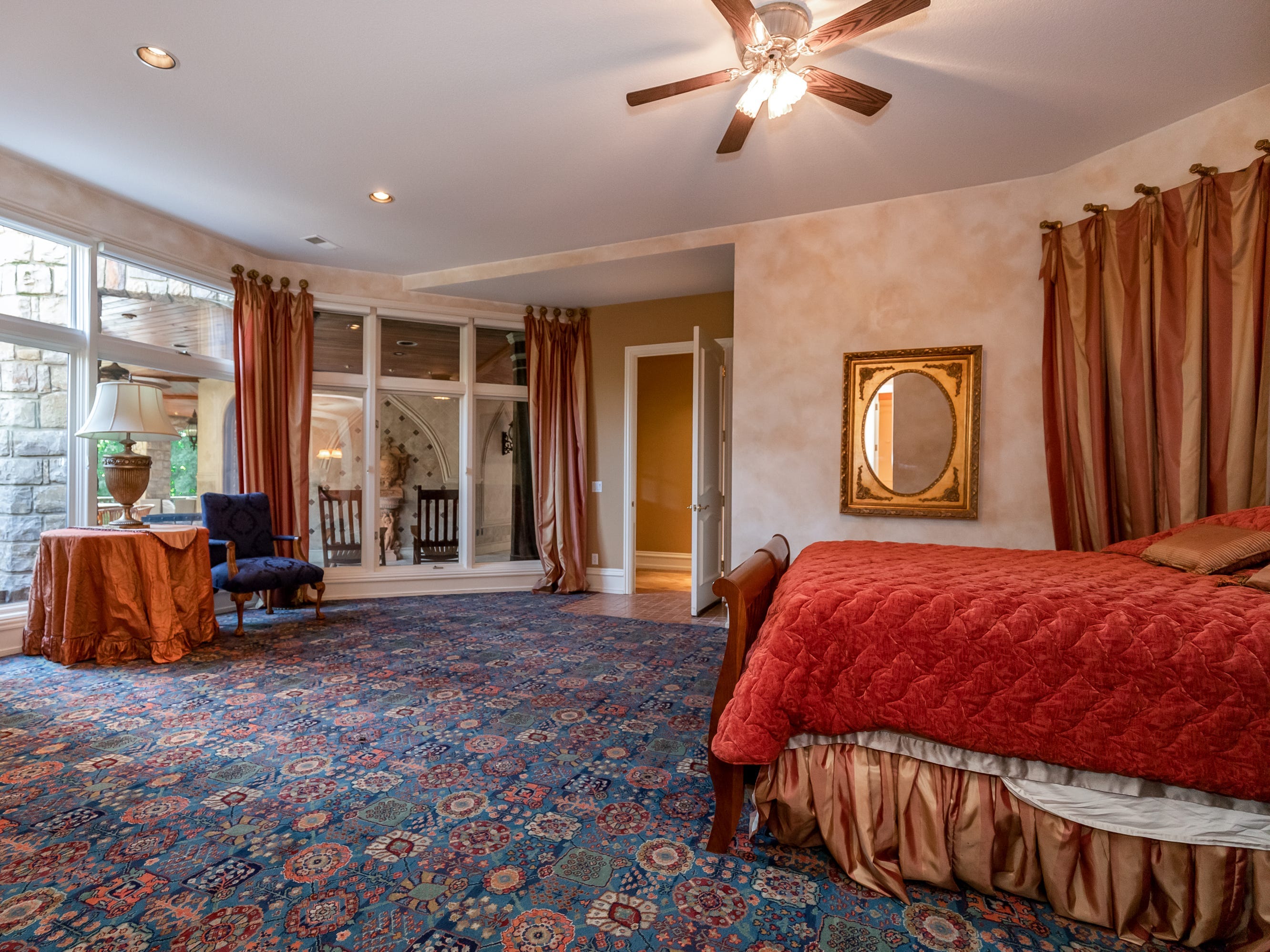 The Perfect SpotOne of the seven bedrooms in the home.

The home also has a commercial-grade kitchen, according to the listing. 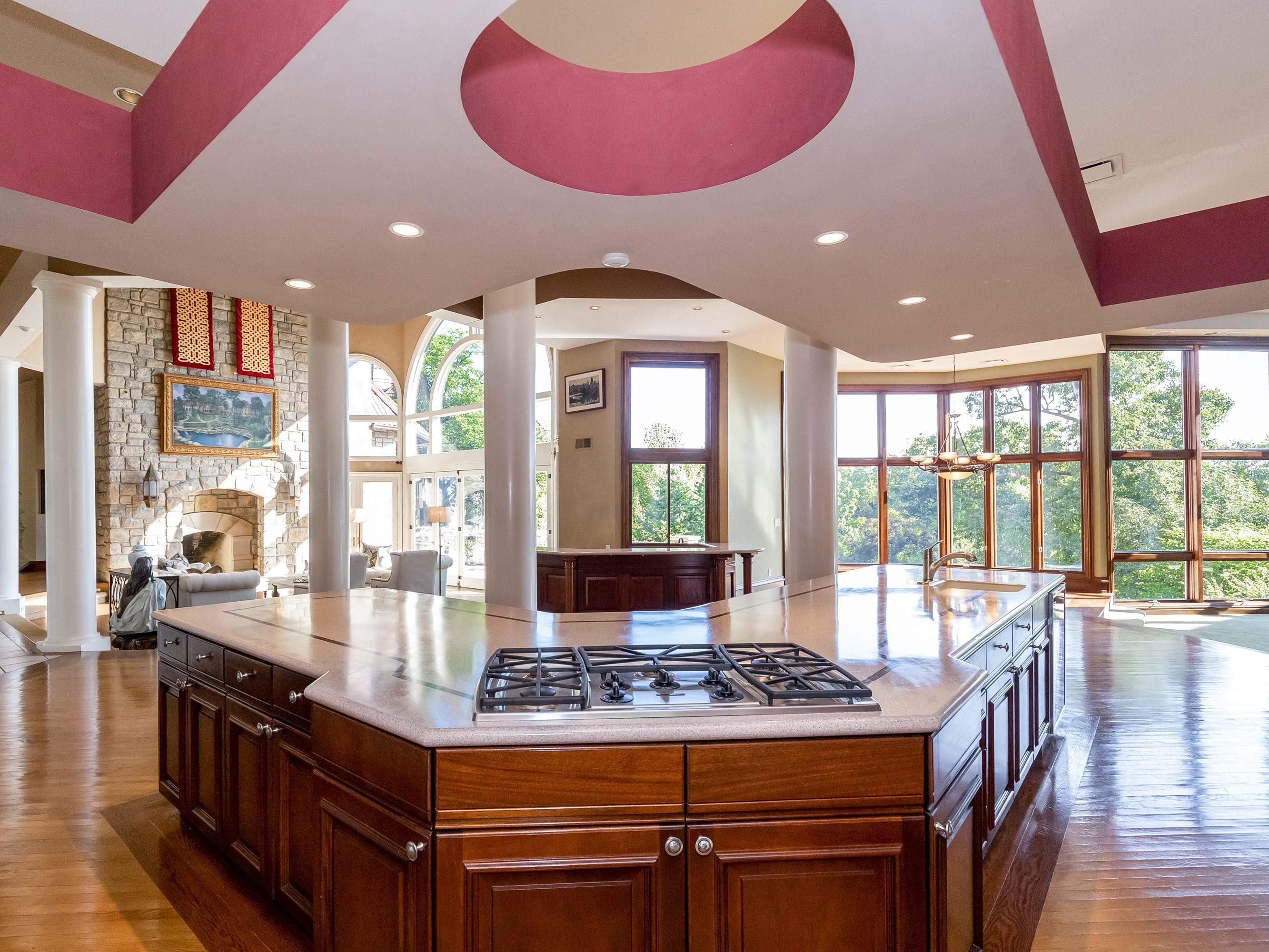 There’s plenty of space for entertaining. According to Crown Realty, the home’s rec room doubles as a mini home theatre, complete with a projection screen. 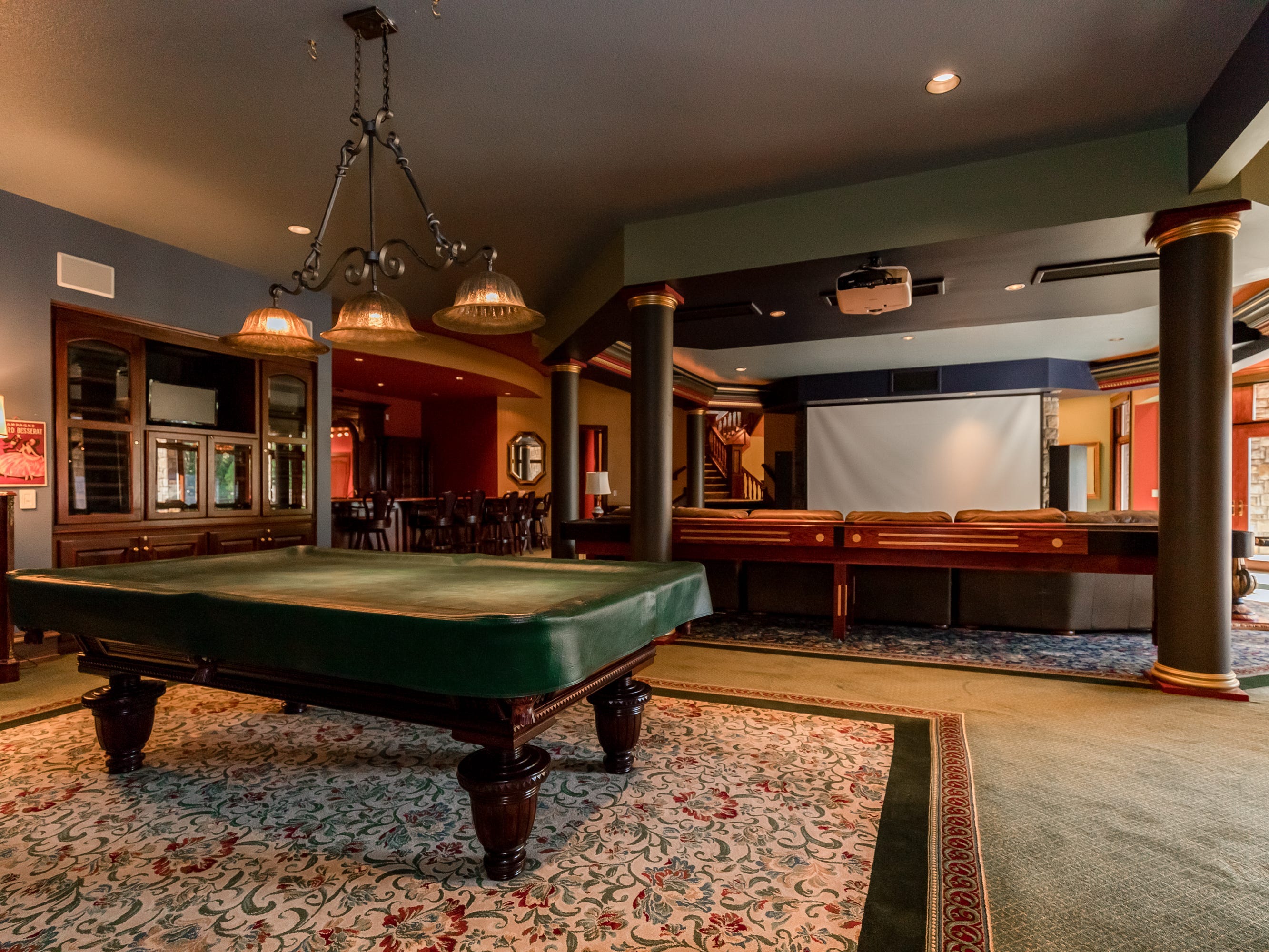 The Perfect SpotThe billiards table and projection screen in the recreation room.

Additionally, the property has its own spacious wine cellar. 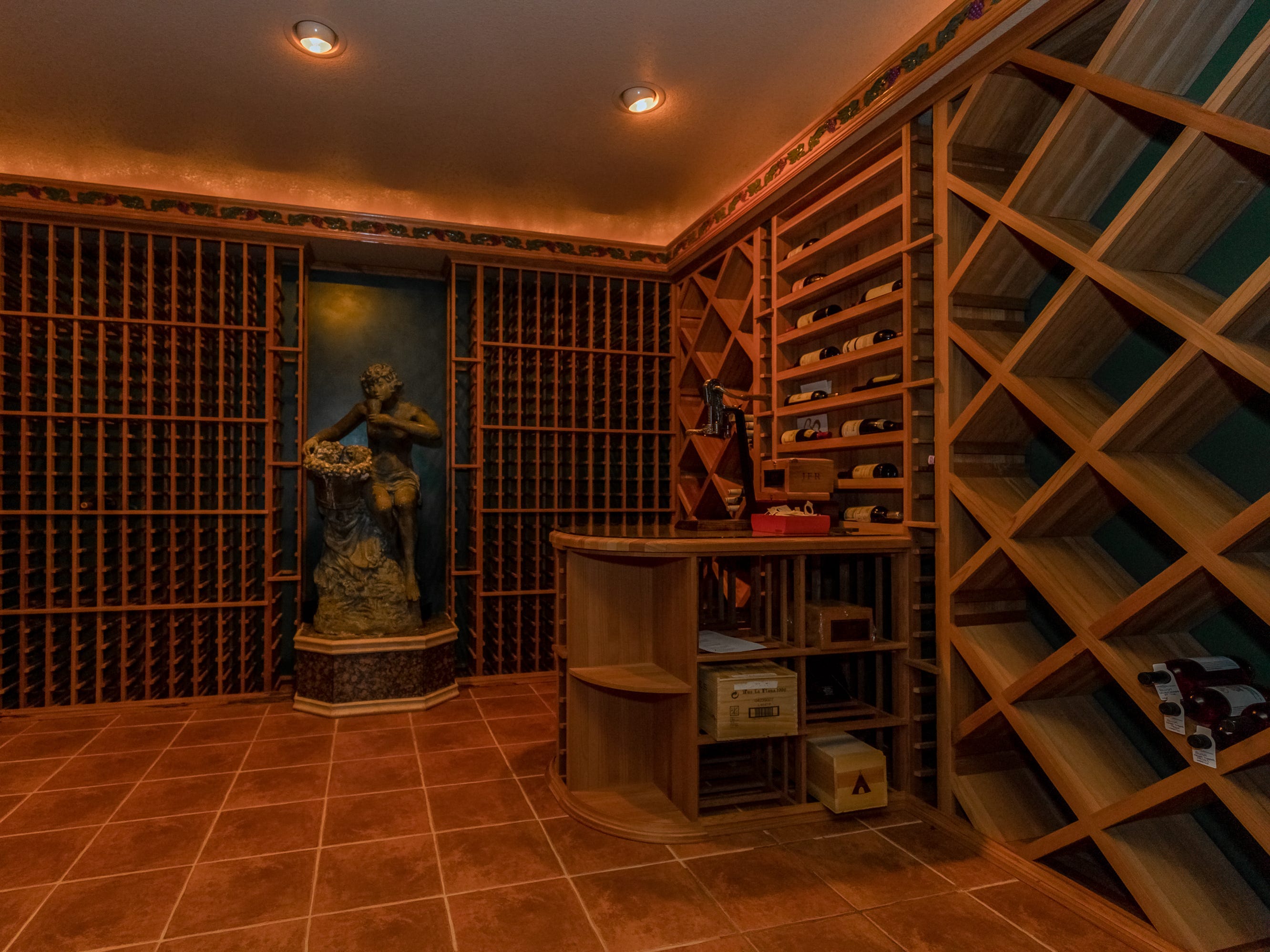 Per Crown Realty, the property also has an office that spans two stories. 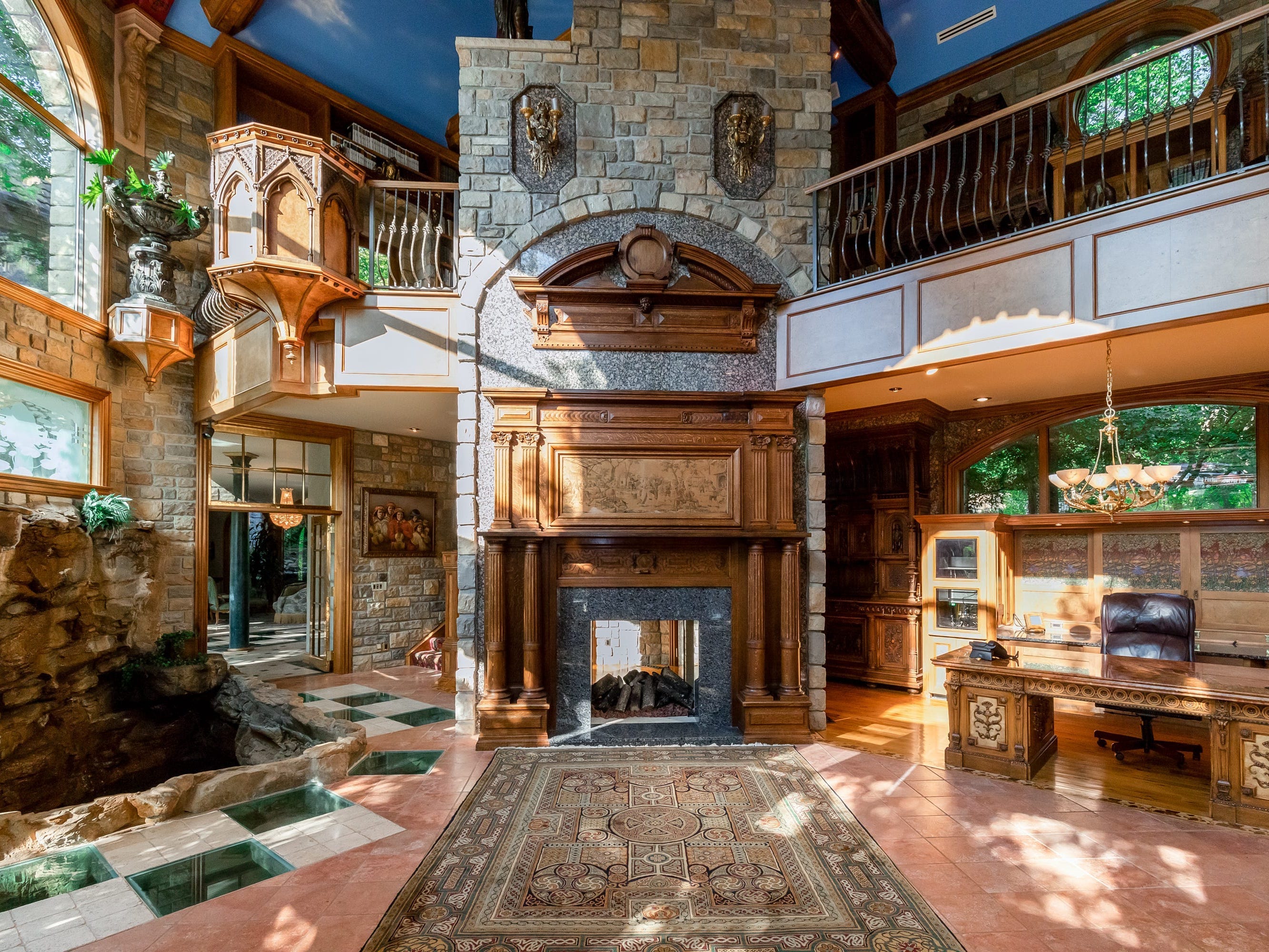 The listing also highlights the home’s private scuba diving tunnels, which feature fossils and a grotto, and its waterfall — certainly the property’s most unique amenities. 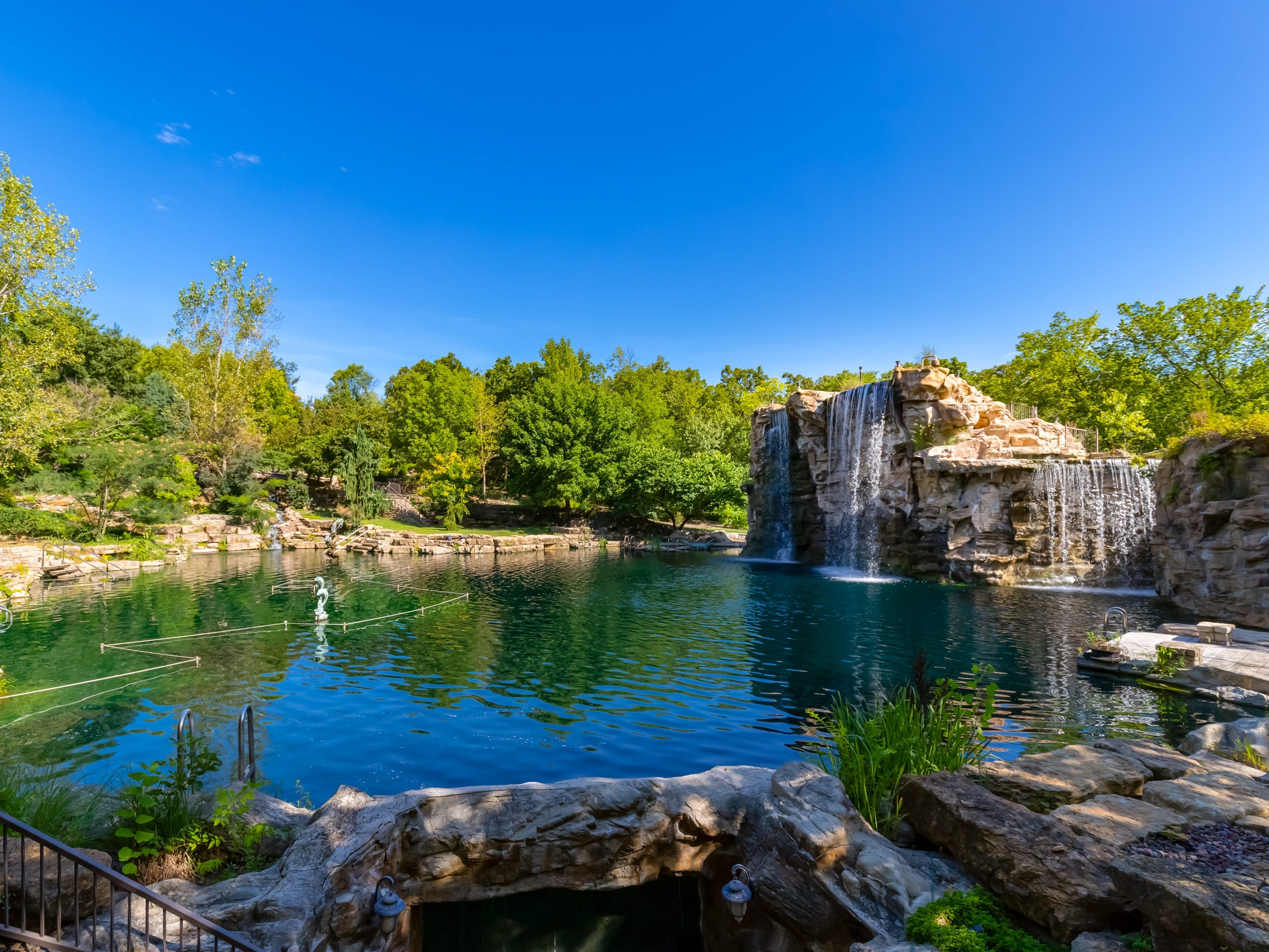 The Perfect SpotThe waterfall and the pond it feeds into.

The home has a large pumping system that keeps the water clean, per the listing agents. Water from the tunnel, grotto, and waterfall feeds into a freshwater pond. 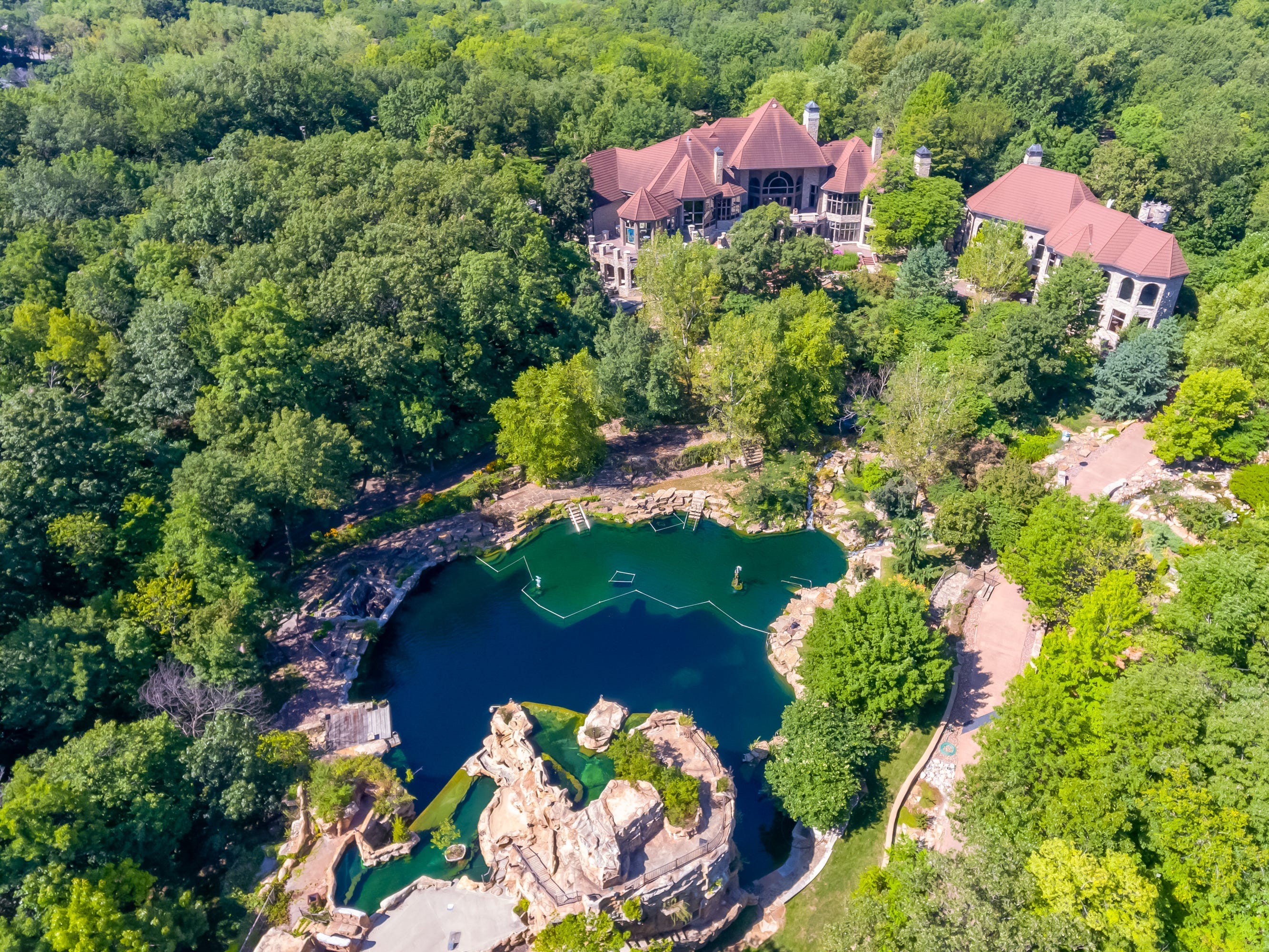 The Perfect SpotA aerial shot of the home.

You can even see water from inside the home. “One of the water features goes under the breezeway room that connects the main home and library addition and is visible [through] glass viewing panels in the floor,” the listing notes. 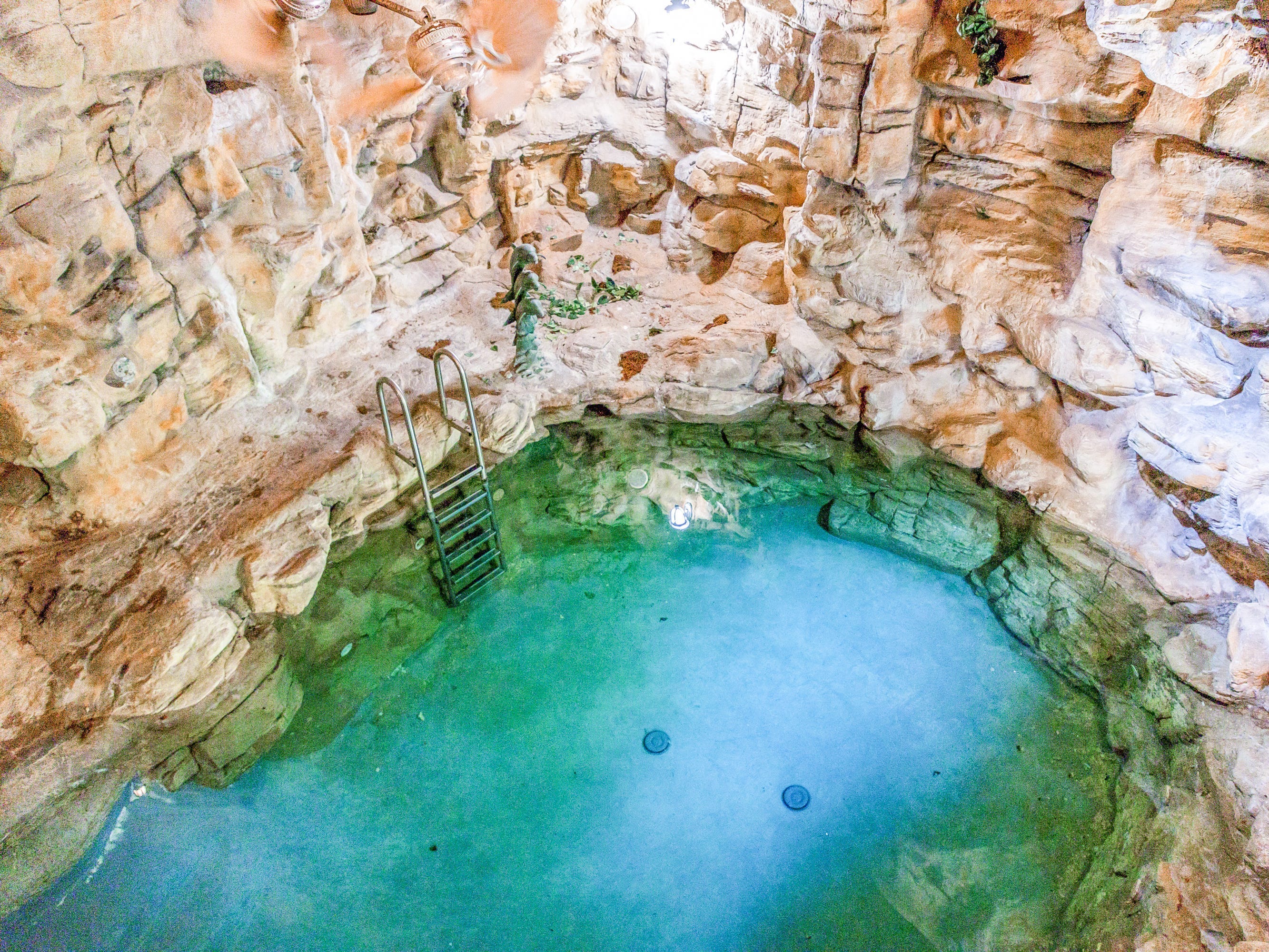 The listing also mentions a garage that fits four cars and a carriage house with its own bedroom and kitchen. 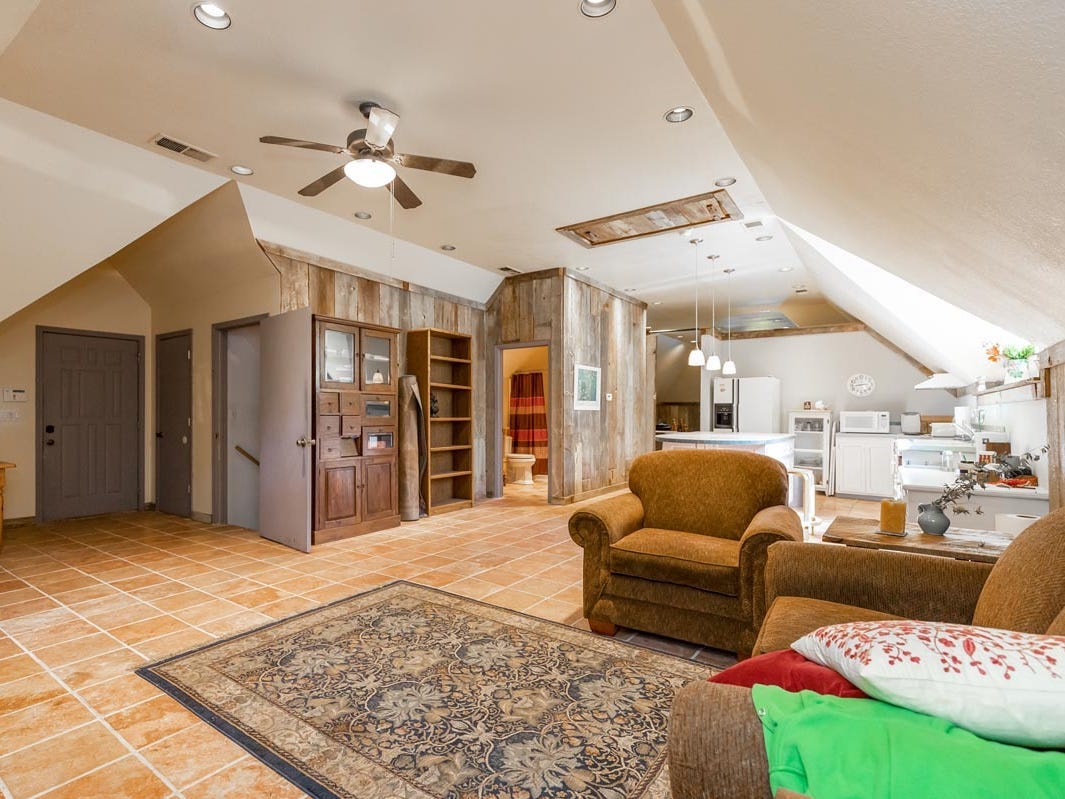 The Perfect SpotInside the carriage house.

The home’s indoor swimming area is tucked away in a grotto, which was constructed over the course of three years circa 2000, according to the listing. 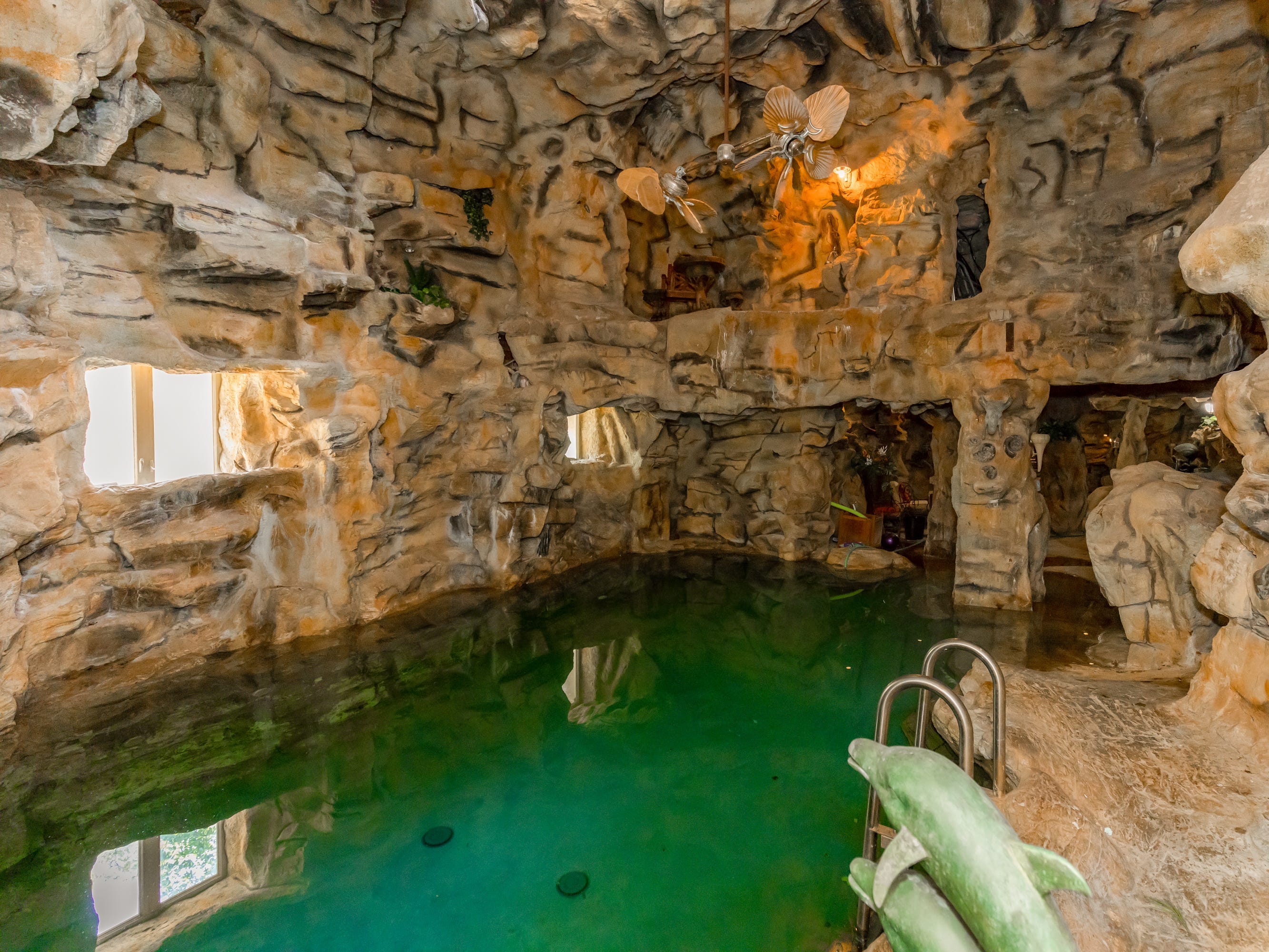 The grotto also features a small seating and bar area. 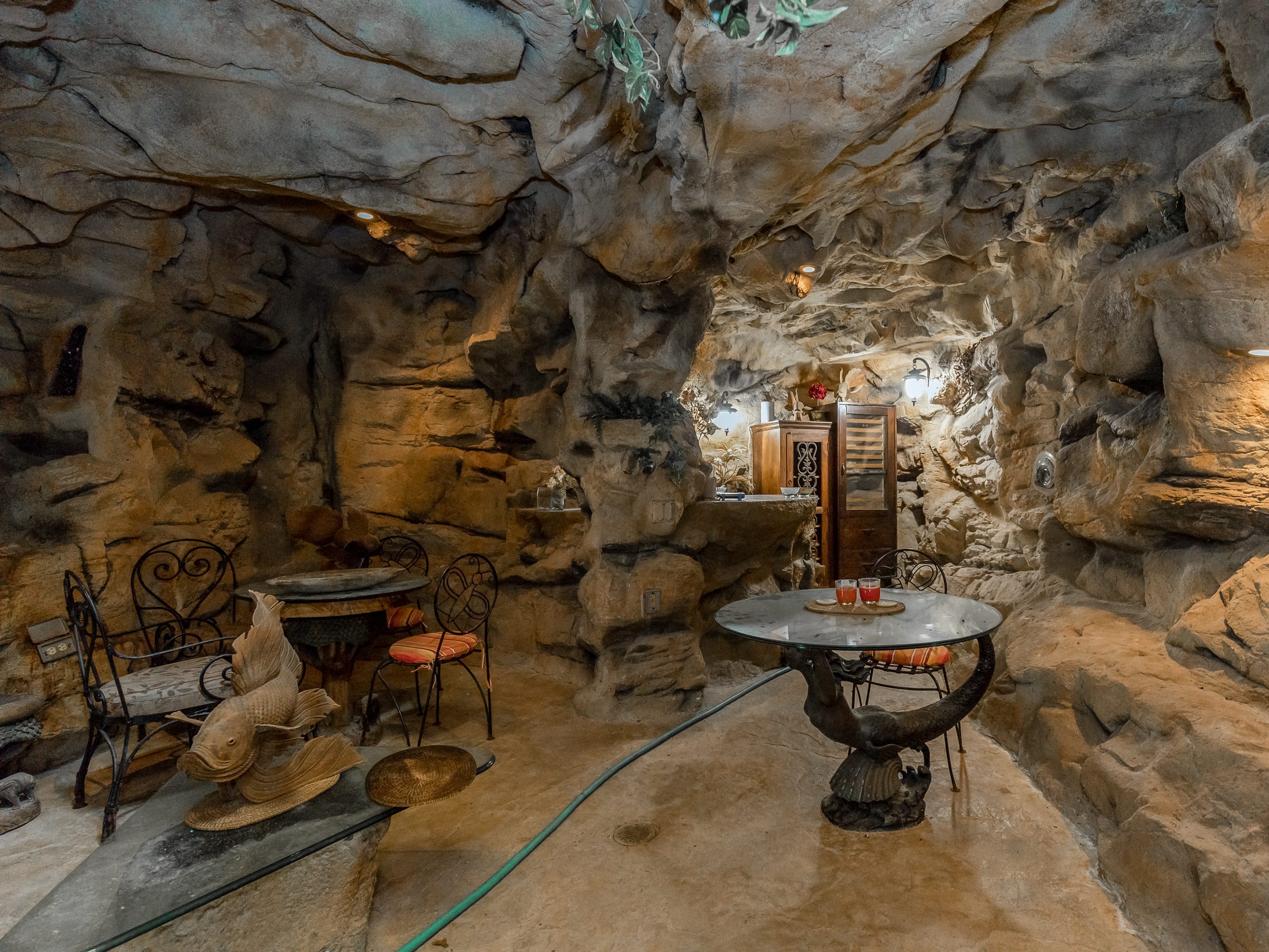