A resurfaced video of Kamala Harris' turkey tips is making the rounds on TikTok, and people are hailing her as a Thanksgiving hero 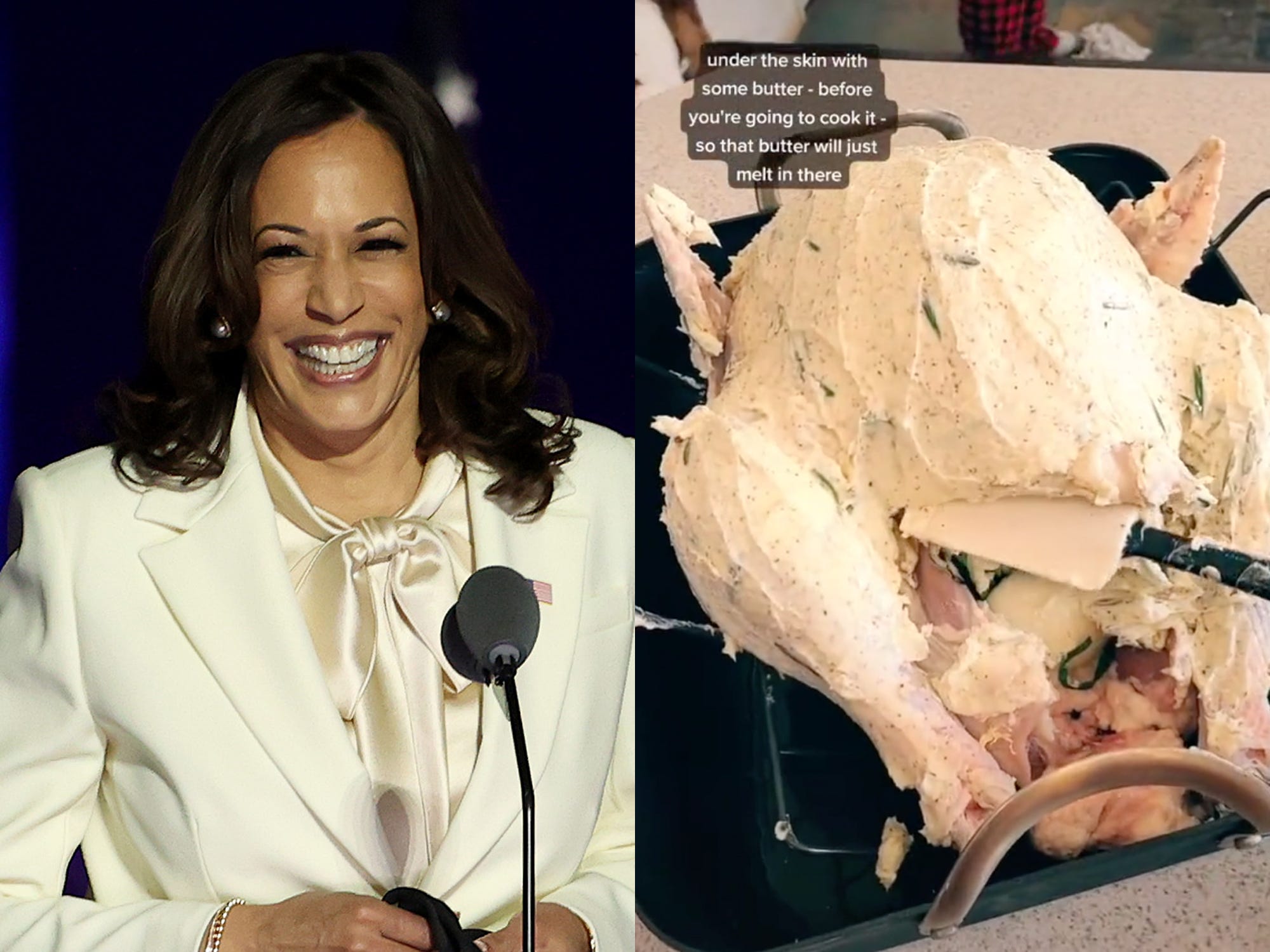 Vice President-elect Kamala Harris is becoming known for her prowess in the kitchen.

Thanks to a resurfaced video trending on TikTok, fans are learning that not only does Harris know how to deliver a speech, she also knows how to cook a turkey like a pro.

In 2019, The Washington Post’s Jonathan Capehart asked then-Sen. Harris about her method for brining a turkey. She went into detail while prepping for an on-air appearance, and Capehart got the whole thing on camera and posted it on Twitter.

Now, a year later, the video is making the rounds on TikTok.

How much does @KamalaHarris like to cook? She answered my husband's ? about brining a turkey about 1 min before going on @PoliticsNation from Columbia, SC (after I was on). I recorded her response 'cause I don't cook and she was speaking a foreign language. ???? #kamalacooks pic.twitter.com/IZiQ6iOnTQ

Harris’ wet brine method includes a pot of water, bay leaves, sugar, peppercorns, and sliced citrus like oranges. She also shared her tips for an easier dry brine if cooks are a little short on time. The vice president-elect suggested dry brining for 48 hours, but said 24 hours would be OK if that’s all you have.

Talking bout the dry brine, Harris instructed Capehart to mix salt and pepper together and spread it all over the bird. “Just like lather that baby up on the outside and in the cavity,” she said.

Then, before it goes into the oven, she said to mix the salt and pepper with thyme and rosemary and spread it underneath the skin of the turkey with butter “so that that butter will just melt in there.”

“And then get a nice big bottle of cheap white wine to baste with butter,” she added just before responding to someone through an earpiece.

Though Capehart tweeted his video a year ago, TikTok users are now referencing it to make their own versions of this vice-presidential recipe.

Abbi (@feministmama on TikTok) made a variation of the recipe and recorded the whole process for her followers. She wrote in her caption that this turned out to be the best turkey she’s ever made. At the time of writing, Abbi’s video had 6.6 million views. You can view it here:

The VP-to-be took to social media herself on Tuesday to share her family recipe for cornbread dressing.

“During difficult times I have always turned to cooking,” Harris tweeted. “This year, I wanted to share one of my family’s favourite Thanksgiving recipes with you. I hope whenever you’re able to make it in life, it brings you as much warmth as it has brought me â€” even when separated from those I love.”

During difficult times I have always turned to cooking. This year, I wanted to share one of my family’s favorite Thanksgiving recipes with you. I hope whenever you’re able to make it in life, it brings you as much warmth as it has brought me—even when separated from those I love. pic.twitter.com/68LUeat4fE

Whether you’re making a full-blown Thanksgiving feast with a large turkey or downsizing your meal to just a plate of stuffing, you can still cook like a VP this year thanks to Harris.