On Thursday, Timberlake was a guest on his former NSYNC bandmate Lance Bass’ podcast, “The Daily Popcast.” During the interview, the 39-year-old singer admitted that he doesn’t regret matching with Spears at the awards show.

“I don’t know man, you could kinda rock that today,” he said. “Look, man, you do a lot of things when you’re young and in love, man. That’s what you do.”

Spears wore a strapless dress that was designed with various shades of blue denim. She paired it with a diamond and silver studded belt that matched her purse, which was also denim and had a sparkly strap. The singer accessorized with a thick choker and a crystal clasp bracelet.

Timberlake was right by her side in a tuxedo jacket and jeans designed with different patches of denim. His diamond necklace matched the same level of shine as Spears’ jewellery.

The former couple’s outfit is so iconic today that other celebrities have since tried to recreate it on the red carpet. At the 2014 MTV Video Music Awards, Katy Perry wore a strapless denim dress to walk the red carpet with rapper Riff Raff, who wore a matching suit.

Spears saw Perry’s tribute and tweeted to praise the singer.

“Just when I thought the denim dress had retired … you bring it back! You looked amazing tonight bb ;),” she tweeted.

“. @britneyspears I did my best impression, hope u likey!” Perry replied.

.@katyperry Just when I thought the denim dress had retired….you bring it back! You looked amazing tonight bb 😉 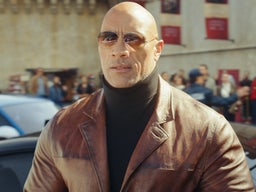