Justin Bieber named Selena Gomez 6 times while refuting sexual assault allegations. Here's why fans are angry that he used her as an alibi. 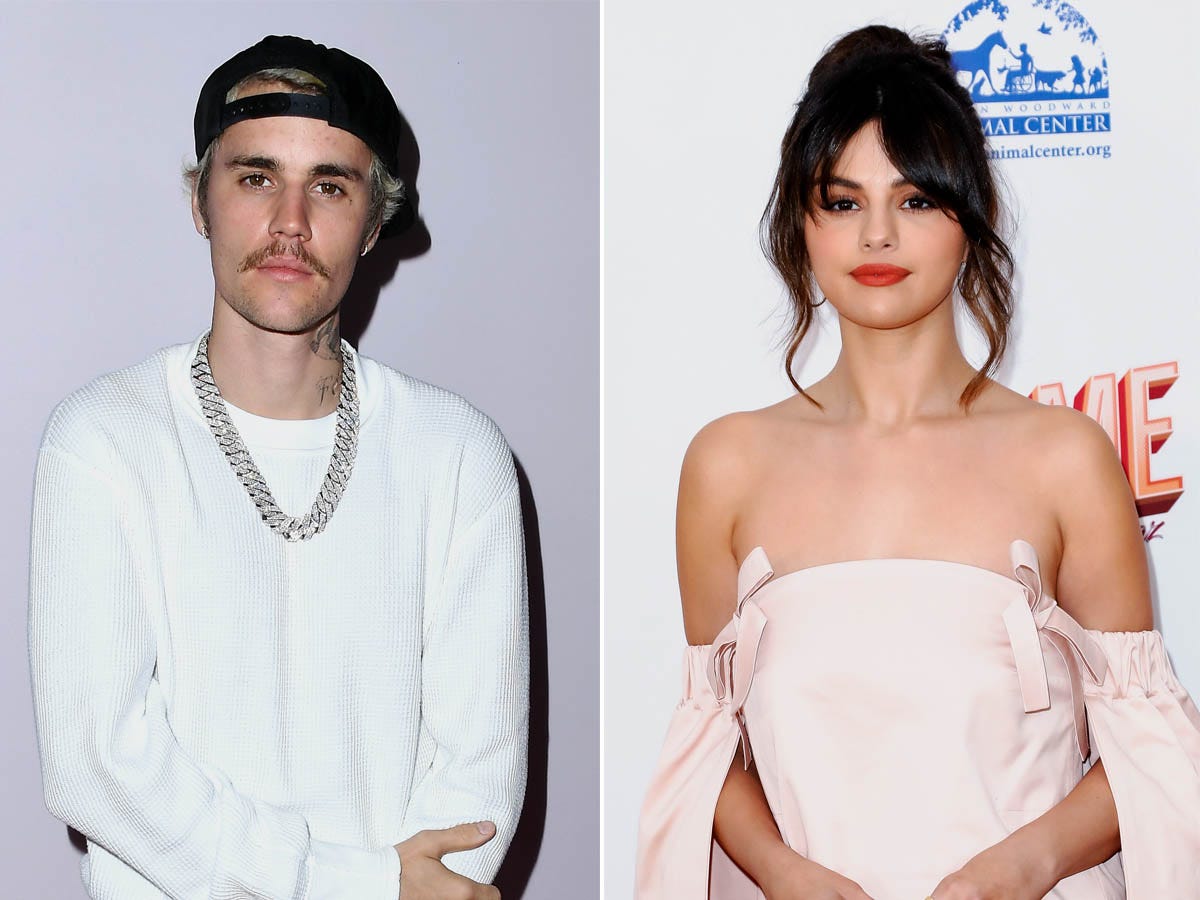 Steve Granitz/WireImage / Tibrina Hobson/Getty ImagesJustin Bieber and Selena Gomez dated on and off for many years.

Justin Bieber is attempting to use Selena Gomez as an alibi after he was accused of sexual assault.

The 26-year-old singer was accused by an anonymous woman on Twitter, who identified herself as Danielle but said she’s not ready to reveal her last name. The account has since been deleted.

“If he comes across this, you know who I am,” she wrote, referring to Bieber. “I know you remember me. I hope your life is hell after this and you drown in guilt.”

Danielle said Bieber raped her in a Four Seasons Hotel in Austin, Texas on March 9, 2014, just after the pop star turned 20 years old. She said she told him to stop and asked him to “get off,” but he “forced himself inside me.”

Anonymous woman accuses Justin Bieber of sexually assaulting her at the Four Seasons in 2014, Bieber’s camp deny the claims and say he was staying at an Airbnb on that date. pic.twitter.com/nXMSQMqmpi

Bieber denied the allegation on Sunday, posting a series of receipts, photos, and links on Twitter, which he says proves his innocence.

Most notably, Bieber repeatedly claimed he was with Gomez, his then-girlfriend, on the night in question.

While Bieber confirmed that he performed for a crowd in Austin, Texas that night, he denies meeting any fans after the show or inviting girls to his room at the Four Seasons Hotel.

“What this person did not know was that I attended that show with my then gf Selena Gomez,” he wrote. “Furthermore I stayed with Selena and our friends at an airbnb on the 9th and on the 10th stayed at a Westin because our hotel reservation at LÀ Quinta and not the four seasons was messed up.”

Bieber posted screenshots that appear to show payments made to an Airbnb and the Westin Hotel. His name does not appear on any receipt, but he claimed that Mike Lowery was his alias.

The Pics I showed of me and Selena march 9 in Austin should make it clear that we were together that night and went from the venue to our Airbnb and never went to the four seasons. This is our airbnb receipt where we crashed with our friends pic.twitter.com/4ZDIqjeCIQ

Bieber and Gomez had an on-and-off romance for nearly a decade before they split for the final time in early 2018. In January,Gomez said that Bieber emotionally abused her.

For his part, Bieber has said he became “disrespectful to women” when he was 19 years old and “abused all of [his] relationships.”

“I found myself doing things that I was so ashamed of, being super-promiscuous and stuff,” he told Vogue last year. “My mum always said to treat women with respect. For me that was always in my head while I was doing it, so I could never enjoy it.”

Although Bieber has defended fellow male celebrities accused of sexual assault, he wrote on Sunday that “every claim of sexual abuse should be taken very seriously.”

Every claim of sexual abuse should be taken very seriously and this is why my response was needed. However this story is factually impossible and that is why I will be working with twitter and authorities to take legal action.

“This is why my response was needed,” he wrote. “However this story is factually impossible and that is why I will be working with twitter and authorities to take legal action.”

Gomez’s fans are furious with Bieber for naming her in his defence, especially after she opened up about the “emotional chaos” he put her through.

They believe it’s disrespectful to publicly rely on her support considering his alleged abuse.

Some believe naming Gomez was a manipulative tactic, because she loved him in the past and may still feel compelled to help him.

Others say that, regardless of Bieber’s intentions, Gomez becoming the centre of attention is a symptom of rape culture, as it puts more pressure on her to respond than on Bieber to take responsibility.

im honestly disgusted at how justin used selena as his security blanket to cover his tracks. this never was about selena, and it never will be. using her to erase a victim's story is disgusting. it will always be fvck justin bieber and anyone that supports him.

justin and his team are using selenas name in an attempt to pressure her into speaking, they’re targeting her and not the friends who were allegedly there because they know selena used to love him and can be manipulated easier. THIS is why victims don’t speak out. OPEN YOUR EYES. pic.twitter.com/Ez4EWPeIPu

Why is Justin Bieber using Selena Gomez (someone who abused and manipulated) as a witness to testify his statement and not any of his friends he claimed were there? This is manipulative bc he knows how she used to love him. Something doesn't add up. I hope she speaks against him

so justin spent years publicly humiliating and belittling selena but now wants to use her to save his reputation pic.twitter.com/JZVJlnFZvL

The way Justin, his fans and his team disrespected Selena for years and now they all depending on her words to save his career.

Interesting how Justin is using Selena’s name, the girl he put through hell, to get him out of this sticky situation pic.twitter.com/k1uBIlyrQt

Justin Bieber gets accused of sexual assault and Selena’s name is the one trending ..I hate men.

selena gomez was a victim of emotional abuse at the hands of justin bieber. bringing her up should only be to point to a pattern of bieber's history of abuse to support the victims. the best course of action, however, is leaving her the fuck alone so she can heal.

These points are underscored by Bieber referring to Hailey Bieber (née Baldwin) as “my wife” in his first tweet addressing the accusation, rather than by her name.

Some critics have noted that Bieber could’ve easily followed that format and referred to Gomez as “my ex” or “my girlfriend at the time,” rather than repeatedly evoking her name and directly linking her to his accusation.

The way he couldn't say hailey's name and referred to her as his WIFE but then names drops selena's name 8 times. He Fucking knows selena wasn't going to say shit and had to emphasize that she was his only "aliba". He's still manipulating her wtf. #justinbieberisoverparty

Why did he refer to Hailey as "my wife" but named dropped Selena MULTIPLE TIMES? He could have easily said "my gf at the time" and kept it moving. He's obviously using Selena's name to deflect attention onto her

justin started his tweets off referring to hailey as “his wife” without mentioning her name why couldn’t he just said “my ex” when talking about selena chile pic.twitter.com/AnMS7nOfwM

Sceptics, however, say that Gomez’s name primarily began trending because her fans were so hasty to defend her.

Others say it’s understandable that Bieber would reference Gomez, since she could potentially clear his name.

Insider previously reached out to Bieber’s team for comment, and will update this post with any new information.