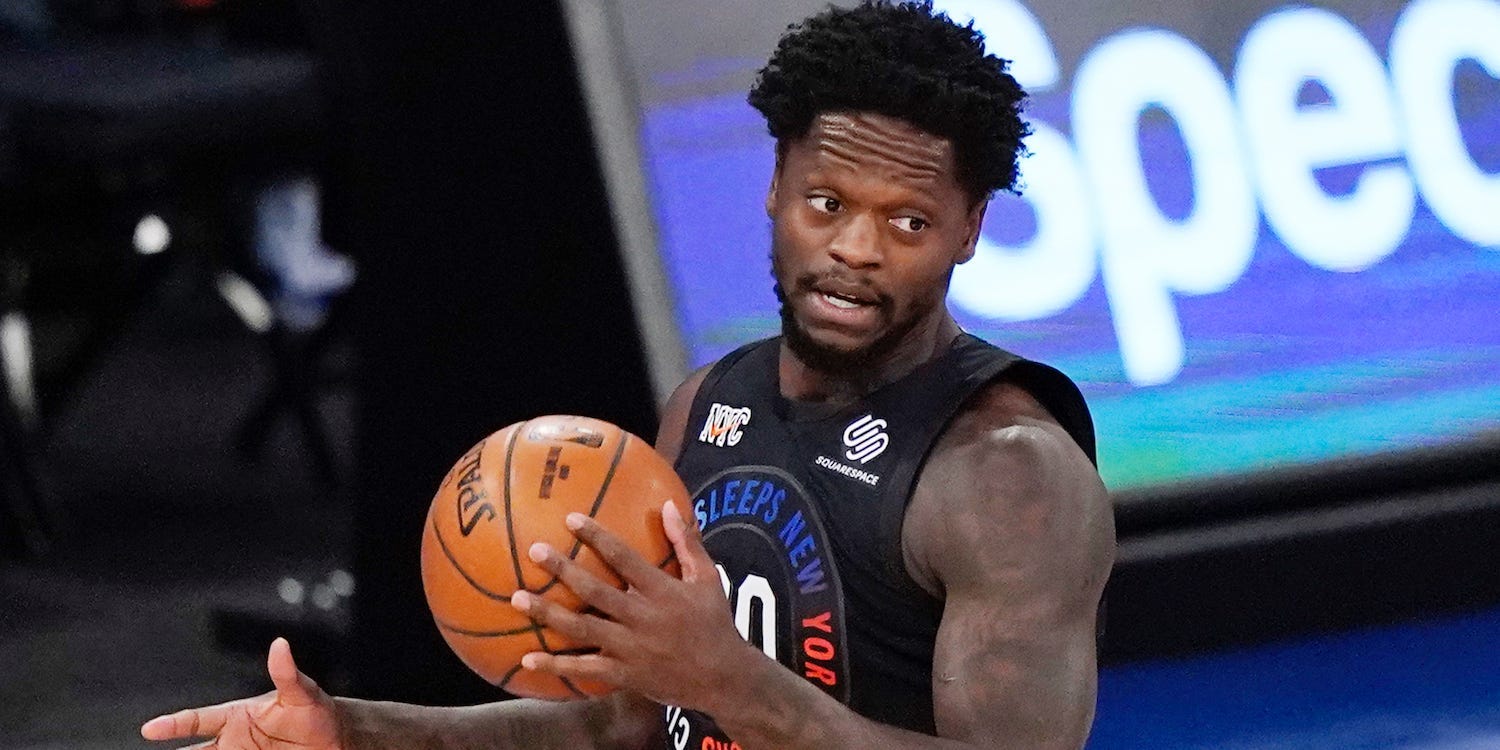 New York Knicks forward Julius Randle is turning in perhaps the most unlikely All-Star-worthy season of the 2020-21 NBA campaign.

The 26-year-old Randle is averaging a career-high 23 points (25th in the NBA) on 47% shooting, to go with career-highs of 40% shooting from three, 11 rebounds, and 5.6 assists per game. He’s one of just four players this season, averaging over 20 points, 10 rebounds, and 5 assists per game, joining Nikola Jokic, Giannis Antetokounmpo, and Domantas Sabonis. He is the only player in the NBA with those stats if you include the 40% three-point shooting.

Few saw such a season coming. Randle was the Knicks’ biggest free-agent signing in the disastrous 2019 offseason that saw the Knicks whiff on the top players like Kevin Durant and Kyrie Irving.

Randle signed a three-year, $US62 million deal with the Knicks, but his first season in New York left fans, coaches, and even teammates frustrated with his inefficient scoring, frequent turnovers, and occasionally empty stats. The New York Post’s Marc Berman had reported that some teammates were frustrated by Randle’s tendency to over-dribble.

It’s hard to pinpoint what exactly led to Randle’s turn-around this season other than perhaps a new coaching staff and tireless work. After scoring 44 points on 14-of-22 shooting, 9 rebounds, and 5 assists on Monday in a big win over the Atlanta Hawks, Randle told MSG’s Rebecca Haarlow he had simply “repped it out” in the offseason.

One big difference in Randle’s 2020-21 season is that difficult shots he missed last year are now going in. Randle played the hero down the stretch for the Knicks on Monday, converting several big shots in key moments.

But Randle’s season has been about more than just hitting difficult shots.

A big part of Randle’s progression has been his increased playmaking and efficiency. Randle has essentially taken a turn as a point-forward. Randle’s 25.9% assist rate (percentage of teammate’s field goals a player assists) is six points higher than his previous career-best and leads the Knicks. His 82.3 touches per game are almost 25 more per game than Elfrid Payton, the Knicks’ starting point guard.

Last year, Randle passed on just 31% of his drives, per Second Spectrum data on the NBA’s stats site. This year, he’s passing on nearly 45% of his drives. He is creating 10.8 potential assists per game (passes that lead to a shot), up from 6.8 last year.

When Randle makes a move to the basket this season, he seems much more cognisant of spraying the ball out to shooters than forcing a shot or a pass through a tight window near the basket.

That turn as a point-forward has kept the Knicks afloat. New York ranks just 24th in the league in offensive rating at 108.2. With Randle on the floor, that number increases by less than a point, but when he is on the bench, the Knicks offence has cratered, scoring just 102 points per 100 possessions, a figure that would rank last in the league.

But Randle’s unexpected leap has been at the core of the Knicks’ unexpected competency this season. At 14-15, the Knicks sit in sixth in the East, with only two of their next seven games against teams above .500. They have a great opportunity to have a winning record after 36 games for the first time since 2012-13.

After his heroics against the Hawks on Monday, Randle’s teammates shared their feelings.

“If this man is not an All-Star, there’s a problem,” Theo Pinson said.

"If this man is not an All-Star, there's a problem."

Julius Randle's teammates got in on the postgame interview after he dropped 44 in a win ???? pic.twitter.com/IATz3X5TFq