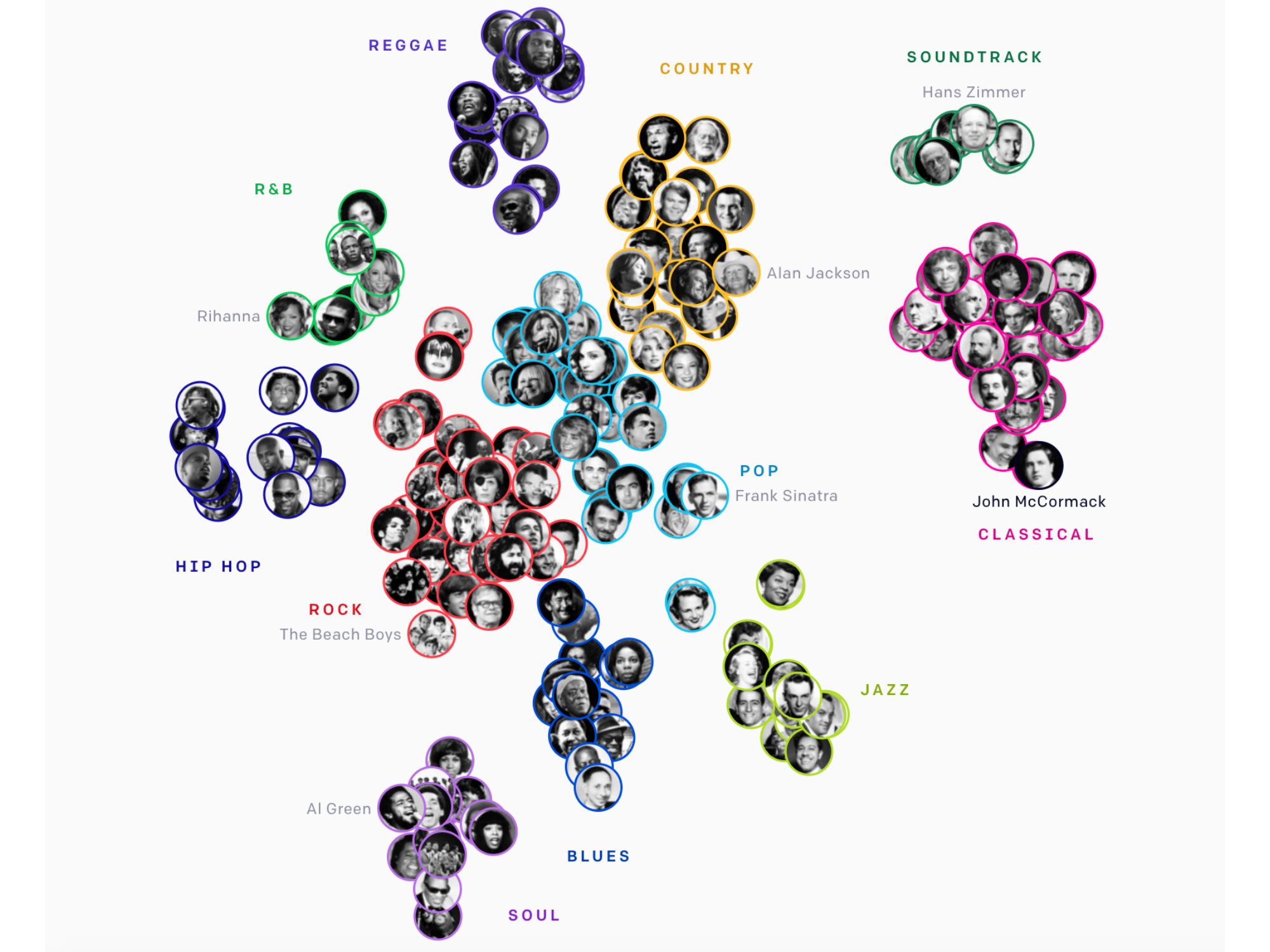 Open AIThe various musicians and artists that researchers used songs from to train the AI behind Jukebox.

Artists may need to start competing with – or embracing – computer-made songs and soundtracks in the near future, if a new AI music generator shows any indication of what could come next for the music industry.

Researchers at artificial intelligence lab OpenAI have released Jukebox, an open-source algorithm that can generate music, complete with lyrics, vocals, and a soundtrack. All the algorithm needs is a genre, an artist, and a snippet of lyrics, and Jukebox can create song samples that can be realistic and quite catchy.

OpenAI’s music generator runs on the same sort of machine-learning technology used to create deepfakes and employed by the slew of sites that popped up in 2019 generating fake memes, fake Airbnb listings, and fake cats. Jukebox produces its AI creations using artificial neural networks that train a computer to learn from an influx of data. In this case, researchers trained a neural network using 1.2 million samples of lyrics, soundtracks and tunes from dozens of artists.

“There is a significant gap between these generations and human-created music,” OpenAI researchers write. “While the generated songs show local musical coherence, follow traditional chord patterns, and can even feature impressive solos, we do not hear familiar larger musical structures such as choruses that repeat.”

The technology also raises some questions about potential legal issues. Jay-Z, for example, has recently been trying to get AI-powered impersonations of himself singing Billy Joel removed from YouTube. His entertainment company, Roc Nation, cites YouTube uploads for “unlawfully” using AI to “impersonate” Jay-Z’s voice, according to The Verge.

Check out some of the best samples Jukebox was able to create, with some assistance from OpenAI researchers. You might notice some of the songs mirror lyrics you’re already familiar with.

This is one way to honour 2Pac’s legacy.

If you ever wanted to reimagine Eminem’s “Lose Yourself” in Kanye West’s music style, look no further.

Can someone who likes heavy metal tell me how realistic this Rage rendition sounds? Because it sounds legit to me.

OpenAI · HeavyMetal, in the style of Rage – OpenAI Jukebox

There’s no mistaking the sound of Elvis Presley.

Bookmark this bop for December. to add into your compilation of Frank Sinatra classics for Christmas dinner.

It’s been a few years since a Katy Perry hit has topped the charts — maybe it’s worth contacting AI researchers for some of the samples from this track.

While the lyrics may not be up-to-par, the instrumental audio sounds like the makings of a legitimate country hit.