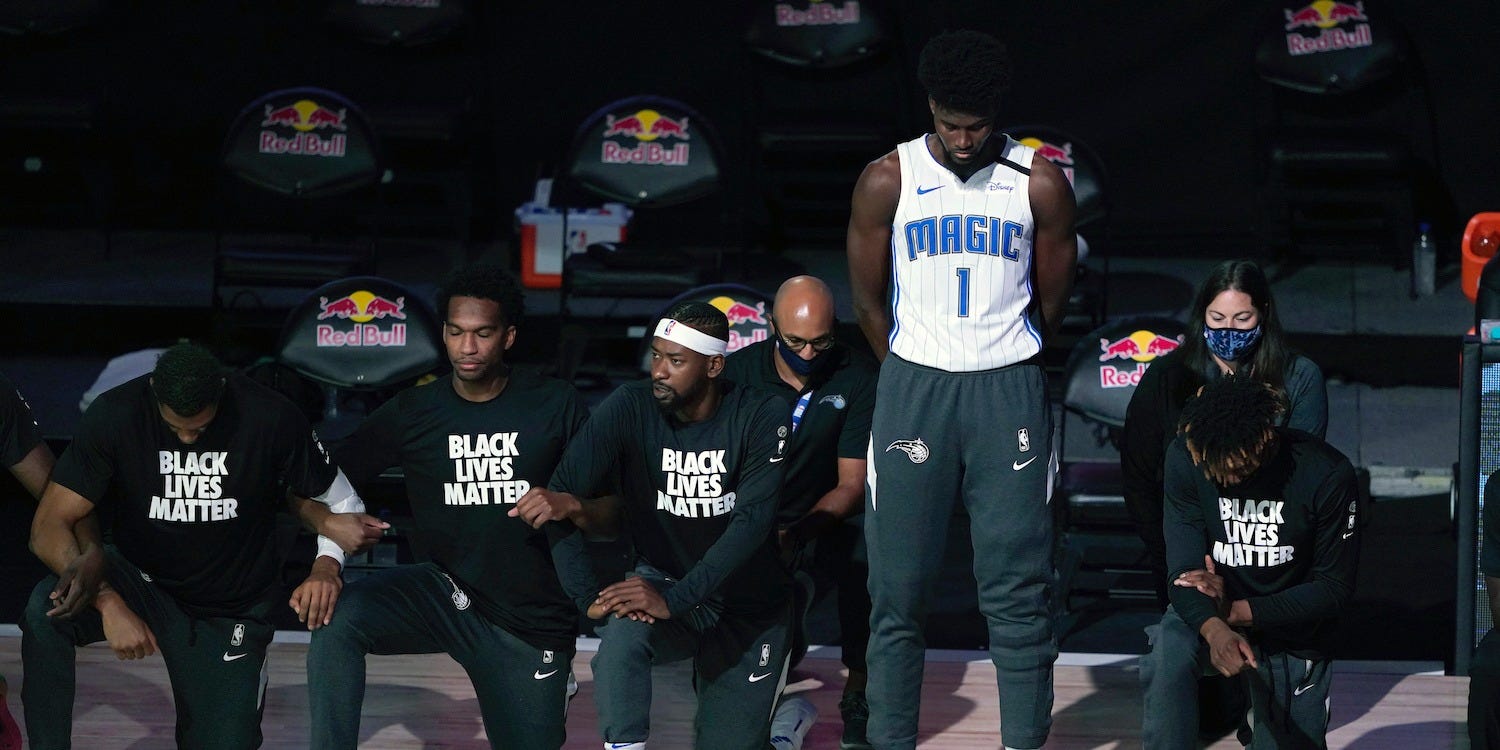 Orlando Magic forward Jonathan Isaac was the only player during the Magic-Brooklyn Nets game on Friday not to kneel for the national anthem.

The move comes after the New Orleans Pelicans, Utah Jazz, Los Angeles Lakers, and LA Cippers all kneeled during the national anthem on Thursday, the opening night of NBA games in the bubble. Players and teams had been planning gestures to make during the anthem while in the bubble.

Isaac also was the only player not to wear a “Black Lives Matter” warmup shirt, instead wearing his own jersey. 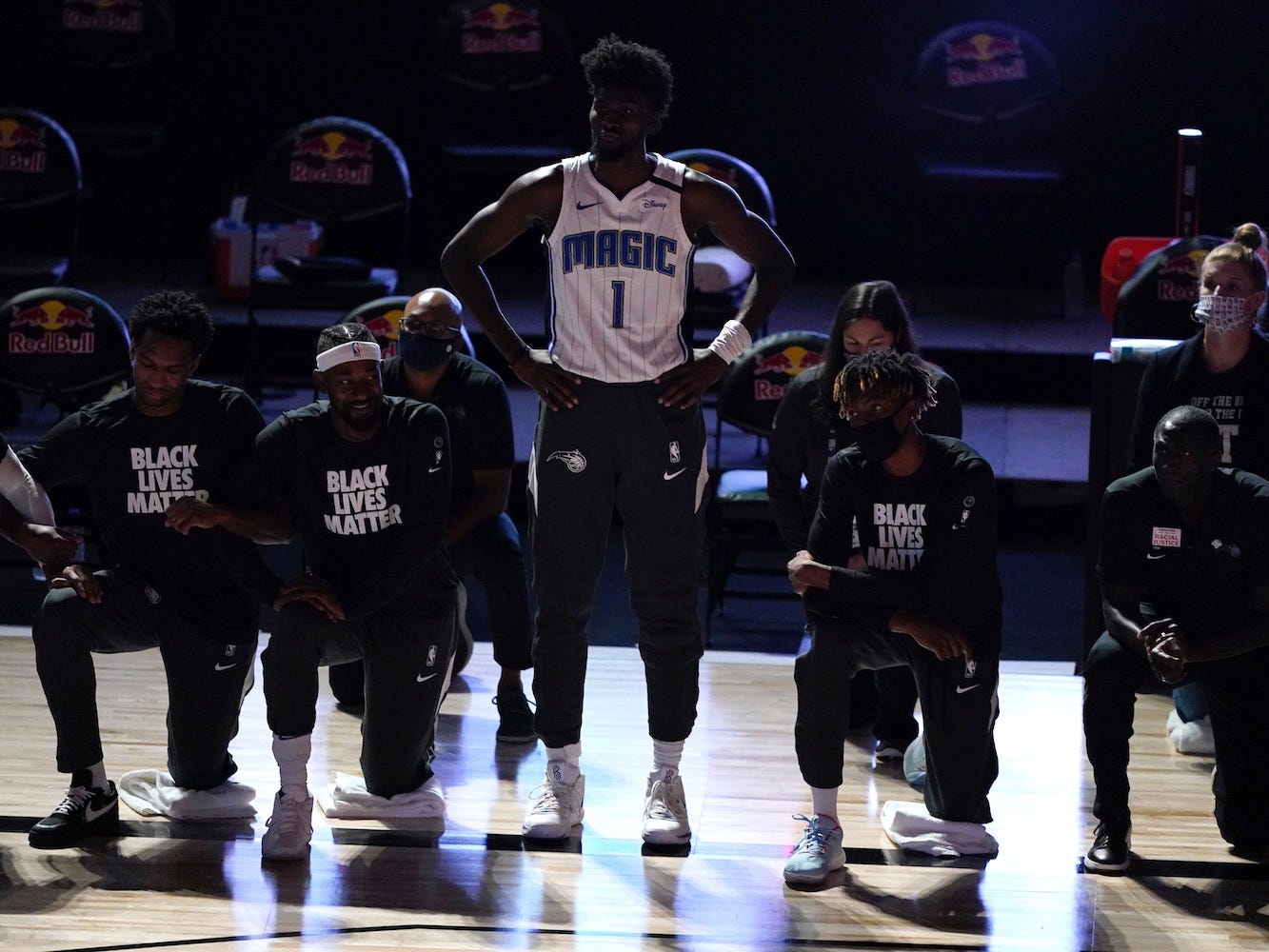 After the game, which the Magic won 128-118, Isaac explained his reasoning for not standing. Isaac said he didn’t feel that kneeling or wearing a shirt was representative of believing that Black lives matter. Isaac tied his decision to religion.

“Black lives and all lives are supported through the gospel,” Isaac said. “We all have things that we do wrong and sometimes it gets into a place of pointing fingers … We all fall short of God’s glory, and at the end of the day, whoever will humble themselves and seek God and repent their sins, that we could see it in a different light. See our mistakes and people’s mistakes through a different light. See people’s evil in a different light. That would help bring us closer together and get past anything that’s on the surface and doesn’t really deal with the hearts of men and women.”

Isaac said he had told his teammates of his decision not to kneel in a team meeting and that they understood.

Magic coach Steve Clifford and guard Evan Fournier both spoke to media after the game and said they respected Isaac’s decision and that he didn’t need to explain his thinking.

The NBA has long had a rule that required players to stand for the anthem, but Commissioner Adam Silver said on Thursday that they would not enforce the rule in the bubble. Players have expressed a desire to make social justice reform a focal point while they resume the 2019-20 season.

According to the Orlando Sentinel’s Iliana Limon Romero, the DeVos family, which owns the Magic, released a statement supporting players’ protests, saying “This is about coming together to end racism once and for all.”

“The DeVos Family and the Orlando Magic organisation fully supports Magic players who have chosen to leverage their professional platform to send a peaceful and powerful message condemning bigotry, racial injustice and the unwarranted use of violence by police, especially against people of colour,” the statement read. “We are proud of the positive impact our players have made and join with them in the belief that sports can bring people together – bridging divides and promoting inclusion, equality, diversity and unity.

“We know this is not about the military, the men and women who serve honorably to keep our communities safe for all, or those who have paid the ultimate price to provide freedom, including freedom of expression. We’re confident the entire Magic family has immense respect for these entities and individuals. This is about coming together to end racism once and for all. We are committed to walking alongside our players – today and in the many days ahead – in the pursuit of lasting and impactful change.”

After the four teams that played on Thursday all kneeled for the anthem, TNT analyst Charles Barkley defended any player who chooses not to kneel.

“The national anthem means different things to different people,” Barkley said. “I’m glad these guys are unified. If people don’t kneel, they’re not a bad person. I want to make that perfectly clear. I’m glad they had unity, but if we have a guy who doesn’t want to kneel because the anthem means something to him, he should not be vilified.”