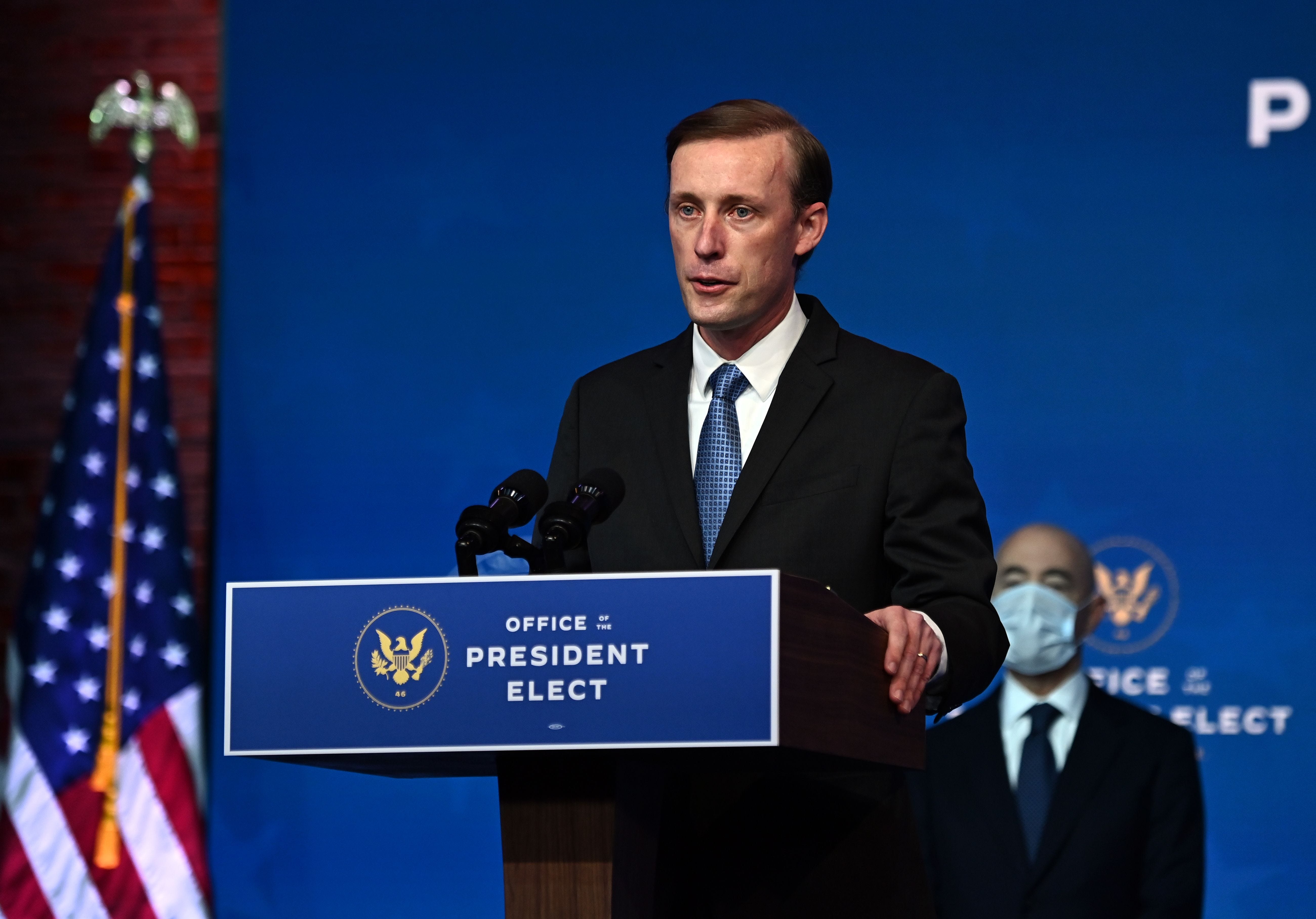 CHANDAN KHANNA/AFP via Getty ImagesNominated National Security Advisor Jake Sullivan participates as US President-elect Joe Biden speaks during a cabinet announcement event in Wilmington, Delaware, on November 24, 2020. – US President-elect Joe Biden introduced November 24, 2020 a seasoned national security team he said was prepared to resume US leadership of the world after the departure of President Donald Trump. ‘It’s a team that will keep our country and our people safe and secure,’ Biden said, introducing his picks for secretary of state, national security advisor, intelligence chief, and other key cabinet jobs’It’s a team that reflects the fact that America is back. Ready to lead the world, not retreat from it,’ Biden said.

Joe Biden’s message ahead of California’s vote on Prop. 22 in November was clear: “It’s unacceptable.”

But the measure, like Biden’s campaign bid, were both approved by voters, setting the stage for a fight between labour advocates and gig-work companies like Uber and Lyft as they seek to replicate the law nationwide.

Further complicating the President-elect’s push to make gig-workers full-fledged employees is a divided Congress that experts say could stymie any heavy-handed regulation. Another potential variable is the fact that some of Biden’s own advisers have close ties to the tech giants’ lobbying efforts.

Specifically, Jake Sullivan, who was nominated as national security adviser this month, was previously advising for Uber and Lyft through his role at Macro Advisory Partners. Before Assembly Bill 5 became law in January, effectively classifying drivers as employees in the eyes of state law, Sullivan was negotiating on behalf of the company’s behind the scenes.

The companies were hoping to reach an agreement with labour leaders including two major national unions that could avoid classifying drivers as employees under AB5, the New York Times reported, and his work with the firms reportedly ended when no carve-out deal was reached.

Of course, his work was simply that: work. But the proximity of him and many other advisers in Biden’s inner circle to K street lobbying shops and other corporate interests have come under fire from more progressive wings of the Democratic party. Meanwhile, President-elect Kamala Harris’ brother,Tony West, serves as Uber’s chief counsel. Insider previously reported he’s in the running for a possible Department of Justice appointment.

Over the summer, a consortium of several dozen progressive groups wrote to both Presidential candidates expressing concern over a “revolving door” between corporations and political jobs. The shadow system creates an over-representation of elites in Washington, they said.

“Past administrations have relied on compliance and mitigation regimes to manage these conflicts of interest, producing a web of disclosures, ethics agreements, and recusals,” the group wrote. “Even when perfectly applied, these strategies leave gaping loopholes that allow former members of industry to materially advance the interests of former and future employers. While these scenarios might not legally qualify as conflicts of interest under our overly lenient laws, the public is not fooled by the supposed propriety of these relationships. “

A Biden transition representative did not respond to a request for comment.

The President’s ear, even if through former contacts, could be especially useful for companies that use gig workers as they seek to replicate Prop. 22’s revolving benefits fund, and guaranteed minimum earnings across the country, while still avoiding a full employment classification.

“For us and our business, most of the regulatory interactions that we have are on a local basis,” Uber CEO Dara Khosrowshahi said at a conference last week. “[Prop 22] was a significant win in kind of the biggest blue state there is. We hope to take with this IC+ [independent contractor plus] model that we really led on to the rest of the country. I think most of our regulatory interactions are on a local basis. I think on a national level, certainty is a good thing for everybody involved.”

Armed with a framework for other states, gig-work companies appear to be readying similar efforts, opposition groups warn. In Illinois specifically, an Illinoisans for Independent Work was formed this summer, the Chicago Tribune reported. The group is similar to a consortium formed by Uber, Lyft, DoorDash, and others in California to garner support for Prop. 22

And on a national level, any efforts to regulate Uber or any other major tech firm won’t have the benefit of a Congress fully controlled by Democrats. That’s something investors have warmed to in recent months.

“We continue to believe the Biden Presidency and very likely Red Senate (January Georgia runoff remains a long shot variable) is a Goldilocks scenario for tech stocks moving into 2021,” Dan Ives, an analyst at Wedbush, said. “The gridlock situation is bullish for the tech sector as now it appears any potential antitrust legislative changes/fixes against Big Tech have essentially hit a brick wall.”