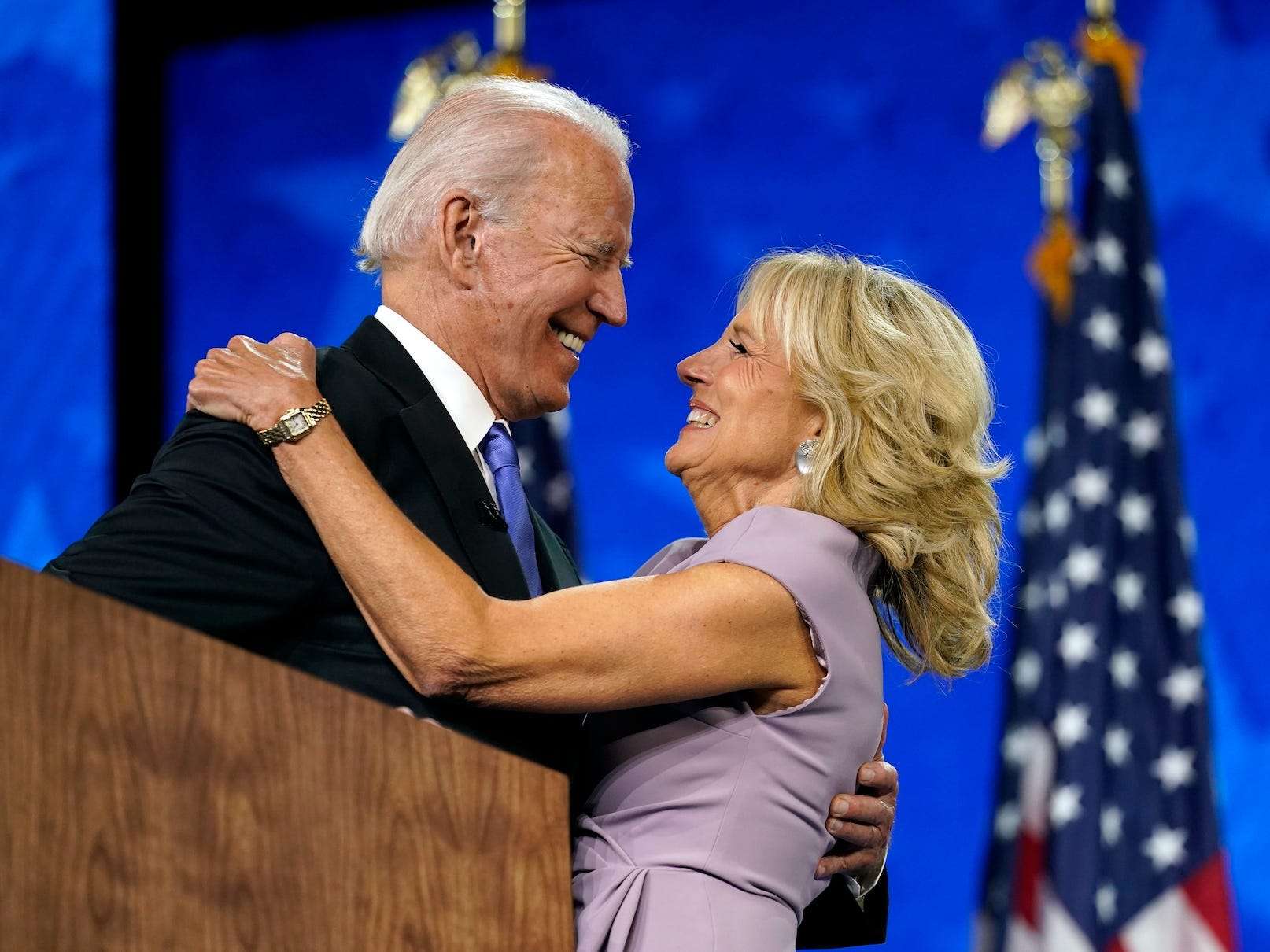 Andrew Harnik/APJoe and Dr. Jill Biden will be the next president and first lady of the United States.

It took some convincing for Jill Taylor Jacobs to agree to marry Joe Biden.

“Joe often tells people that I didn’t agree to marry him until the fifth time he asked me,” she said in a speech at the 2012 Democratic National Convention. “The truth is, I loved him from the start.”

Through their nearly 44 years of marriage, Joe and Dr. Jill Biden have been at each other’s sides through successes and failures, through joyful celebrations and devastating losses.

Now, President Joe Biden has become the 46th president of the United States, and Jill is America’s new first lady.

Keep scrolling for a complete timeline of their relationship. 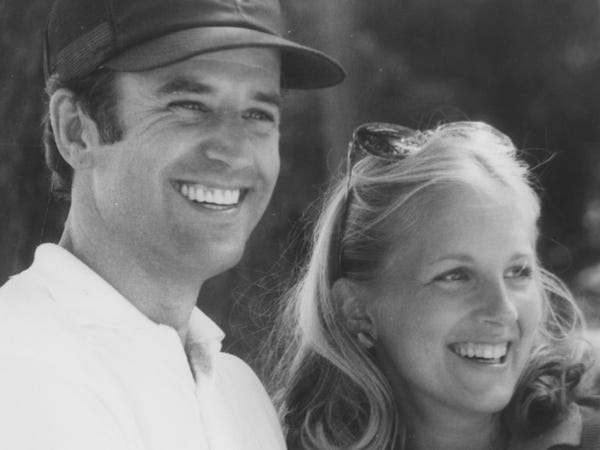 Office of United States Senator Joe Biden/Public DomainJoe and Jill Biden in the early days of their relationship.

Joe was a 33-year-old US senator, and Jill was a 24-year-old college senior. Both had been married before. Joe’s wife and daughter died in a car crash in 1972, leaving him a widower with two sons, and Jill and her husband filed for divorce in her junior year.

“I was a senior, and I had been dating guys in jeans and clogs and T-shirts, he came to the door and he had a sport coat and loafers, and I thought, ‘God, this is never going to work, not in a million years,'” Jill Biden told Vogue. “He was nine years older than I am! But we went out to see ‘A Man and a Woman’ at the movie theatre in Philadelphia, and we really hit it off. When we came home … he shook my hand good night … I went upstairs and called my mother at 1:00 a.m. and said, ‘Mum, I finally met a gentleman.'” 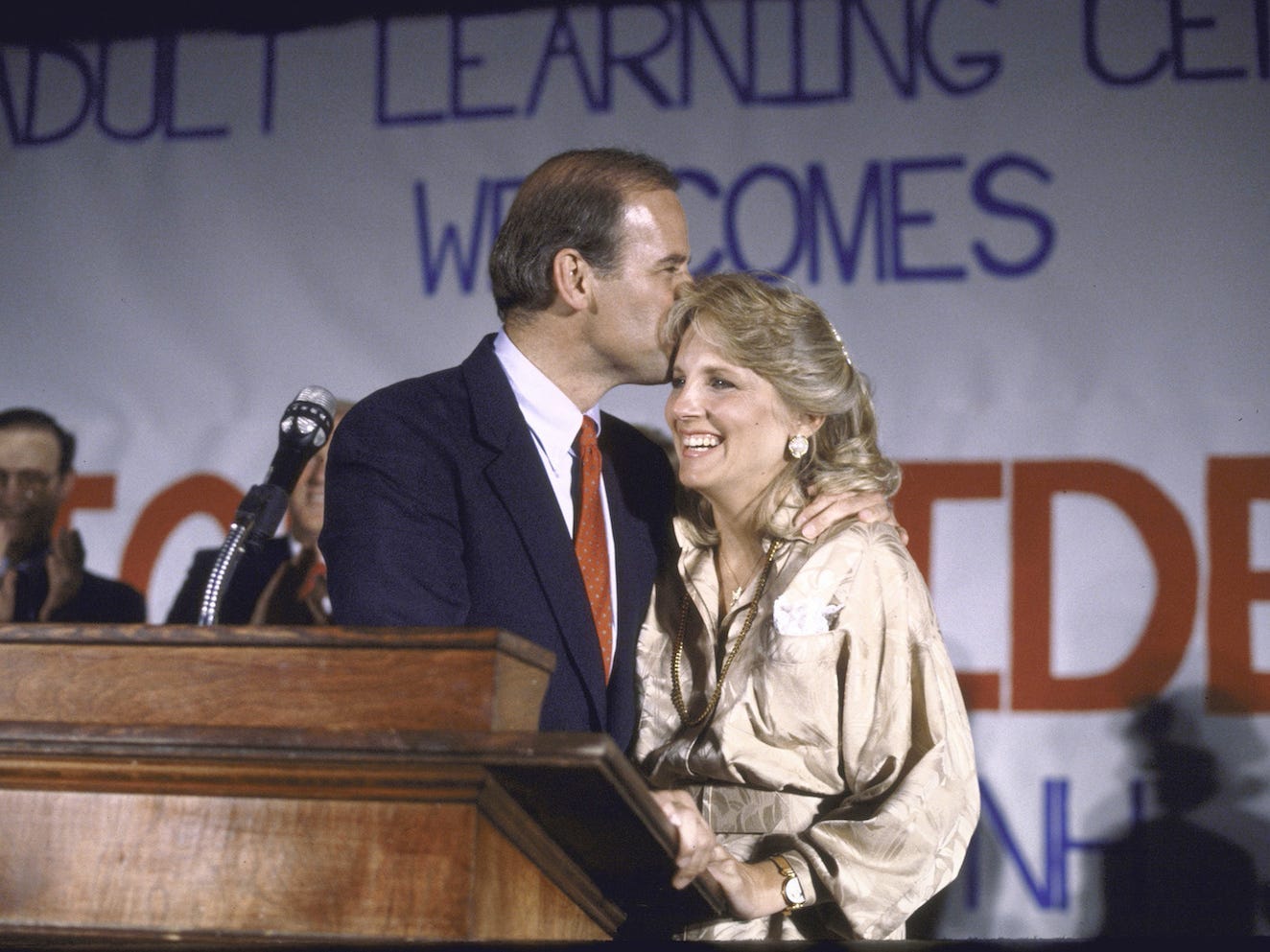 “I said, ‘Not yet. Not yet. Not yet,'” Jill told Vogue of Joe’s proposals. “Because by that time, of course, I had fallen in love with the boys, and I really felt that this marriage had to work. Because they had lost their mum, and I couldn’t have them lose another mother. So I had to be 100 per cent sure.”

They held their wedding ceremony at the United Nations chapel and a reception lunch at Sign of the Dove in New York City. They took sons Beau and Hunter on their honeymoon. 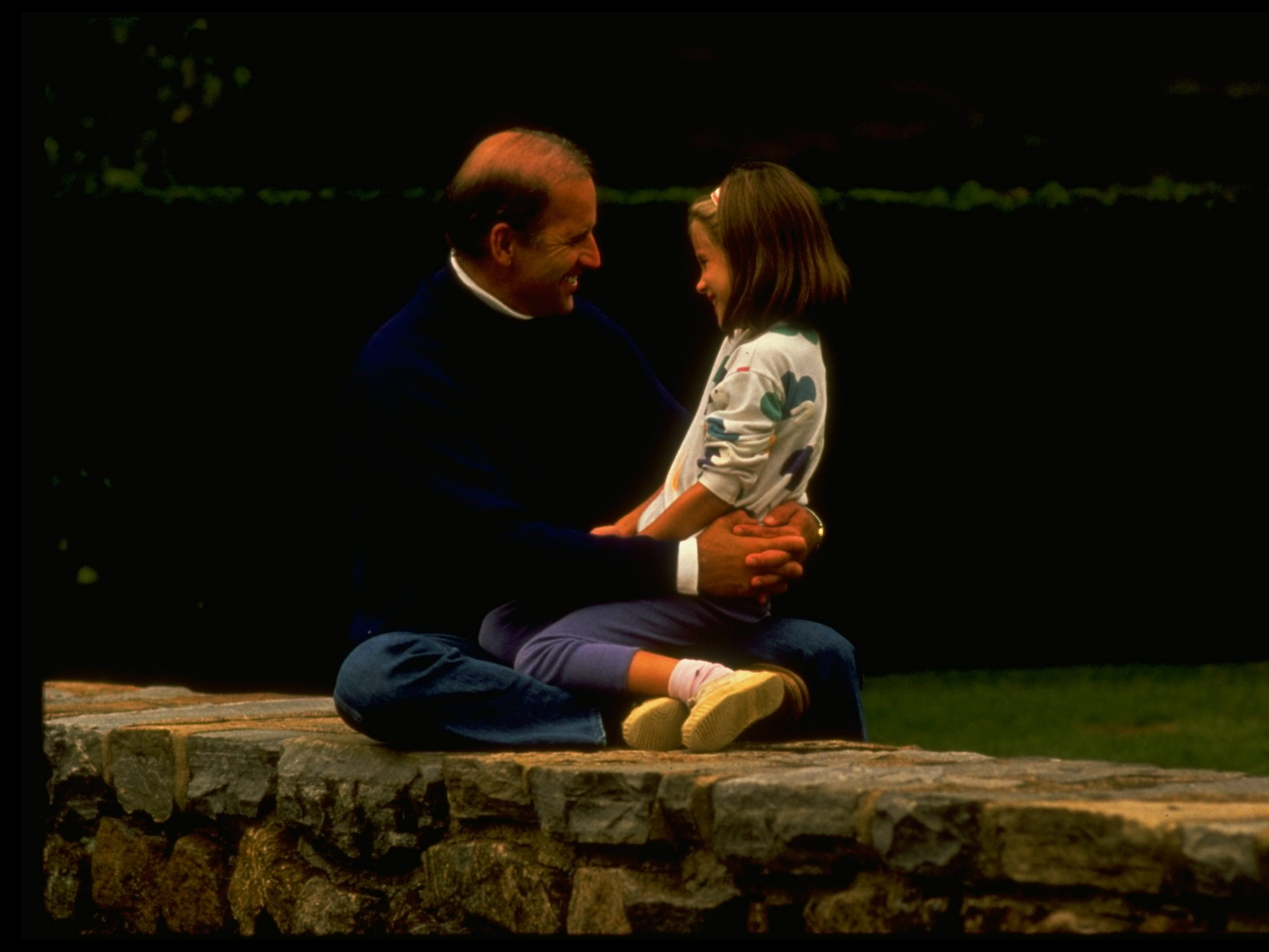 “Our family was complete,” Jill said in a video shown at the 2020 Democratic National Convention.

June 1987: When Joe announced his candidacy for president, Jill was by his side. 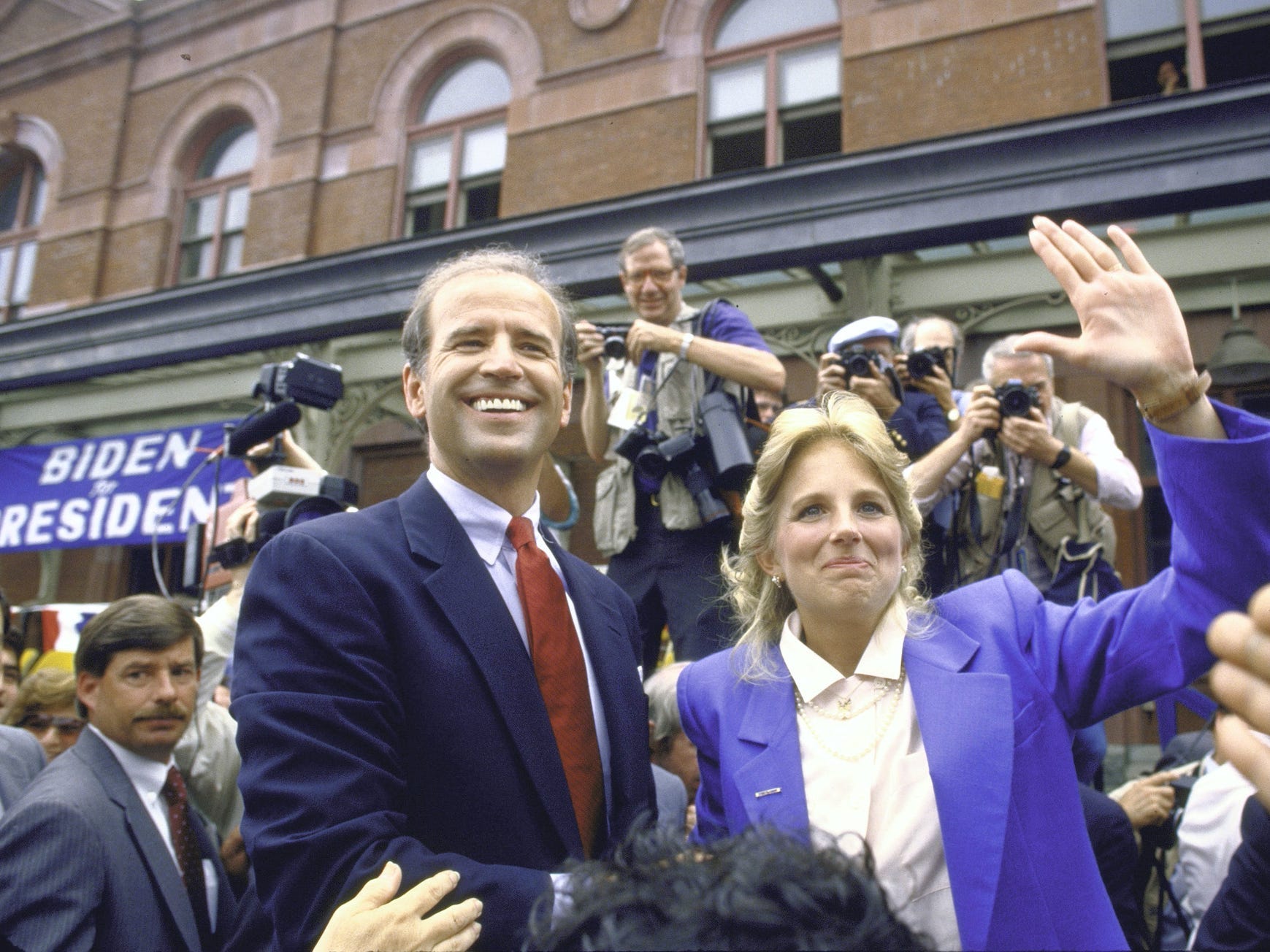 He announced his presidential run in Wilmington, Delaware.

September 1987: They presented a united front when he withdrew from the race. 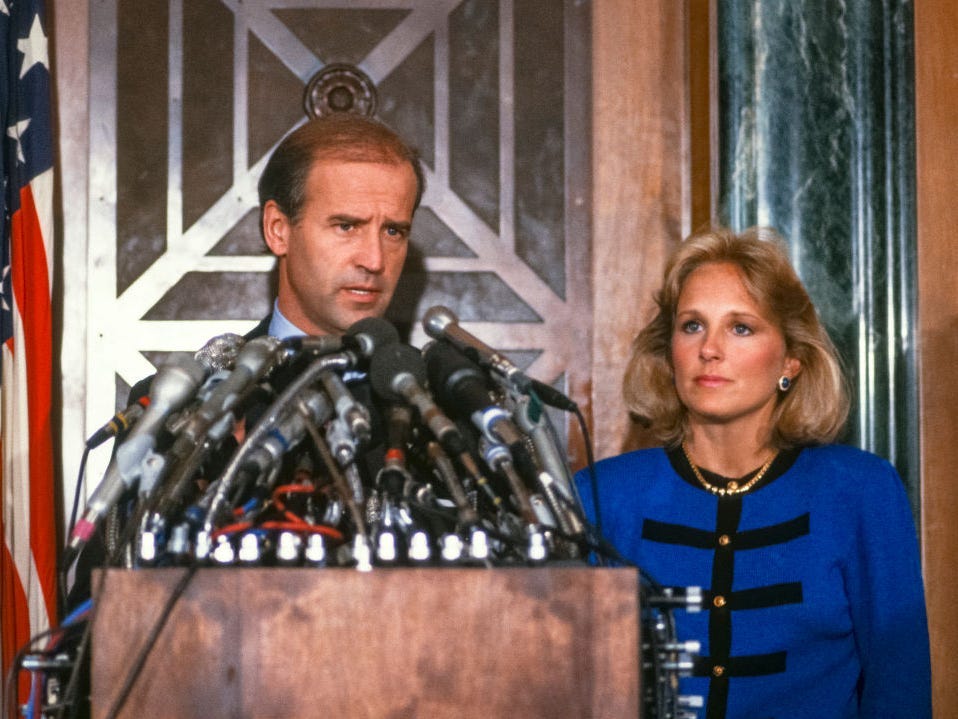 Arnie Sachs/CNP/Getty ImagesJoe Biden announces his withdrawal from the race.

His short-lived campaign had been enveloped in scandal, with allegations of plagiarizing his speeches and exaggerating his academic records from college and law school, according to the New York Times.

“‘I made some mistakes,” he said as he announced the end of his campaign.

The New York Times described Jill’s face as “a study in dejection.” Jill later wrote about controlling her emotions in her memoir “Where The Light Enters.”

“As a political spouse, I’ve found that my stoicism often serves me well,” she wrote. “In 1988, when Joe’s first presidential campaign started to look bleak, people were constantly looking for cracks in our team. We all felt scrutinised, but I refused to show weakness.”

1988: Joe had two brain aneurysms. The couple posed outside the hospital when he was discharged after the first of two operations. 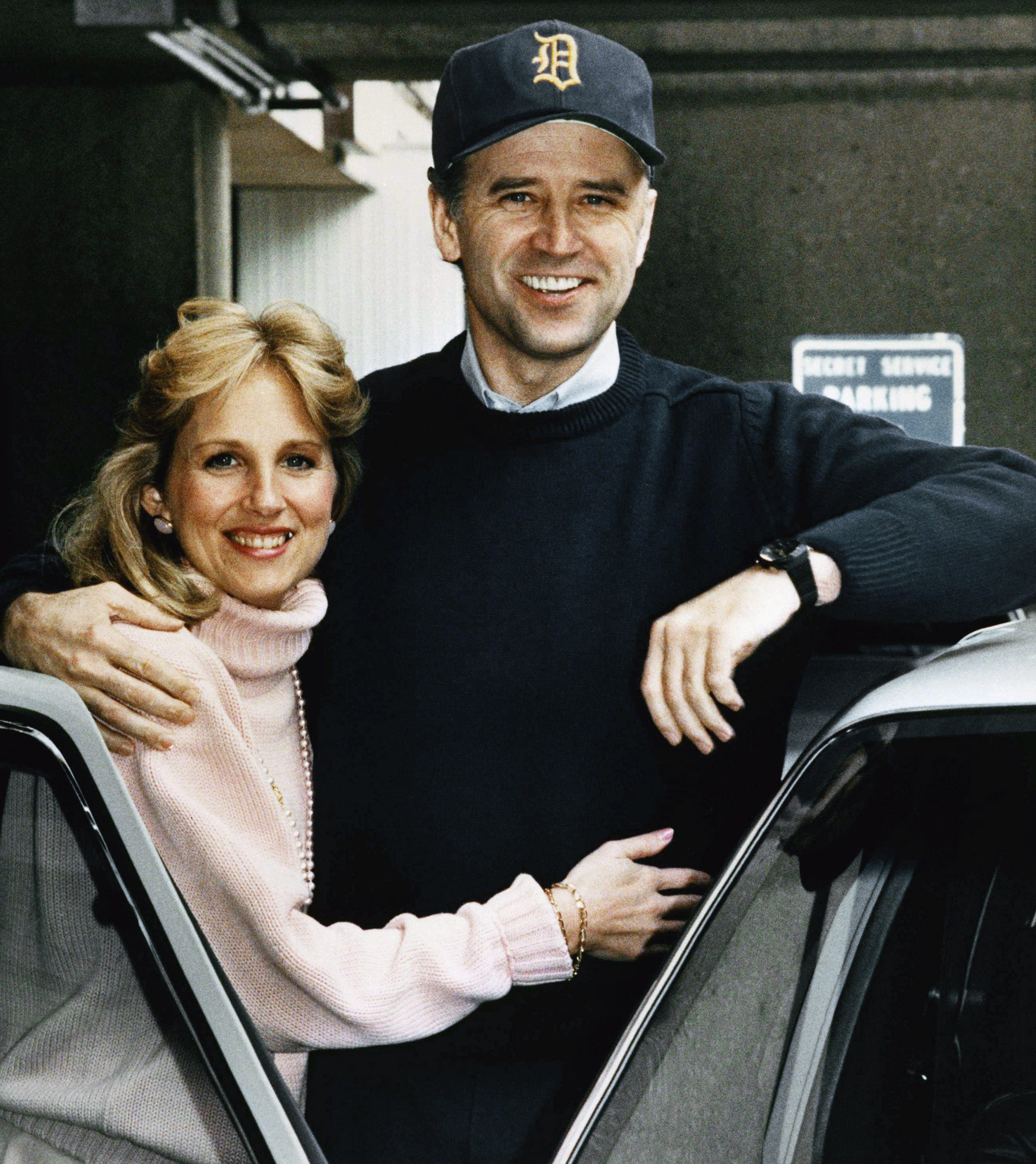 Pam Price/APJoe and Jill Biden at Walter Reed Army Medical Centre after he was discharged.

Joe had a pulmonary embolism later that year as he recovered. In her book, Jill writes about watching as “EMTs carried him down the steps of our house on a stretcher.”

2007: Joe wrote about his love for Jill in his memoir, “Promises to Keep.” 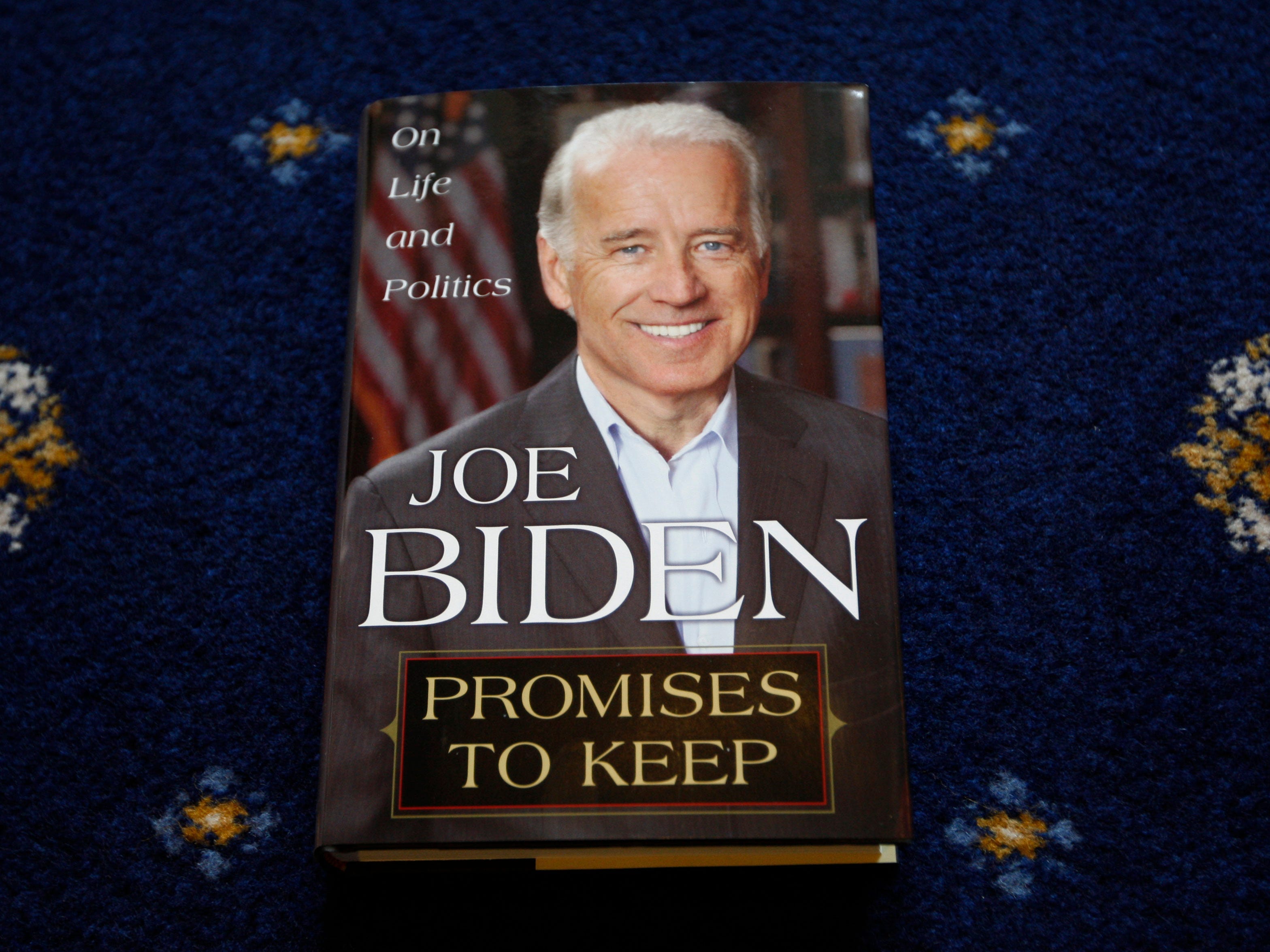 “She gave me back my life,” he wrote. “She made me start to think my family might be whole again.”

2007: Jill earned her PhD in education from the University of Delaware. At the graduation, Joe handed Jill her doctorate. 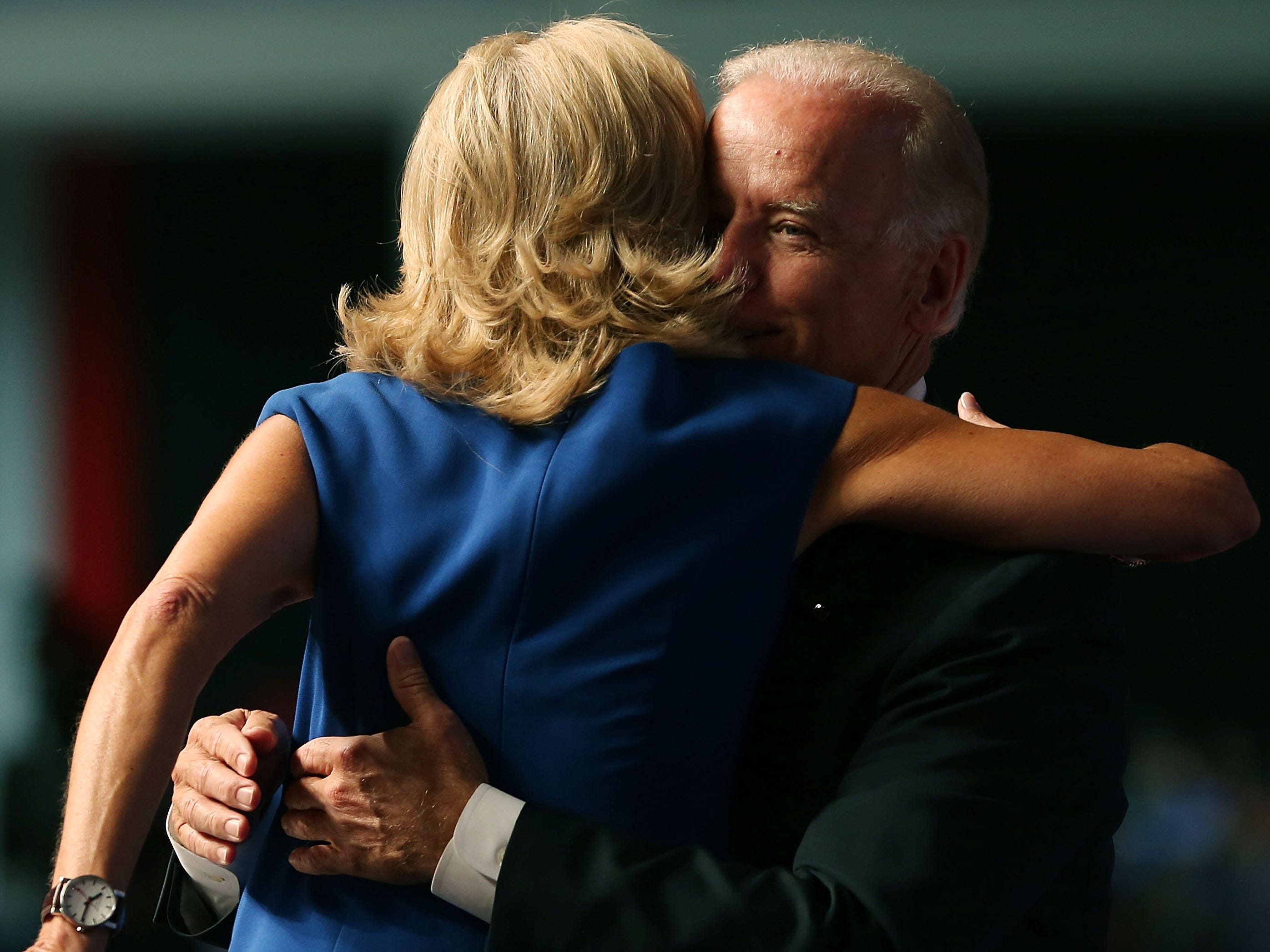 Mark Wilson/Getty ImagesJoe and Jill Biden on the campaign trail.

2008: Barack Obama chose Joe as his running mate, and the two families developed a close bond. 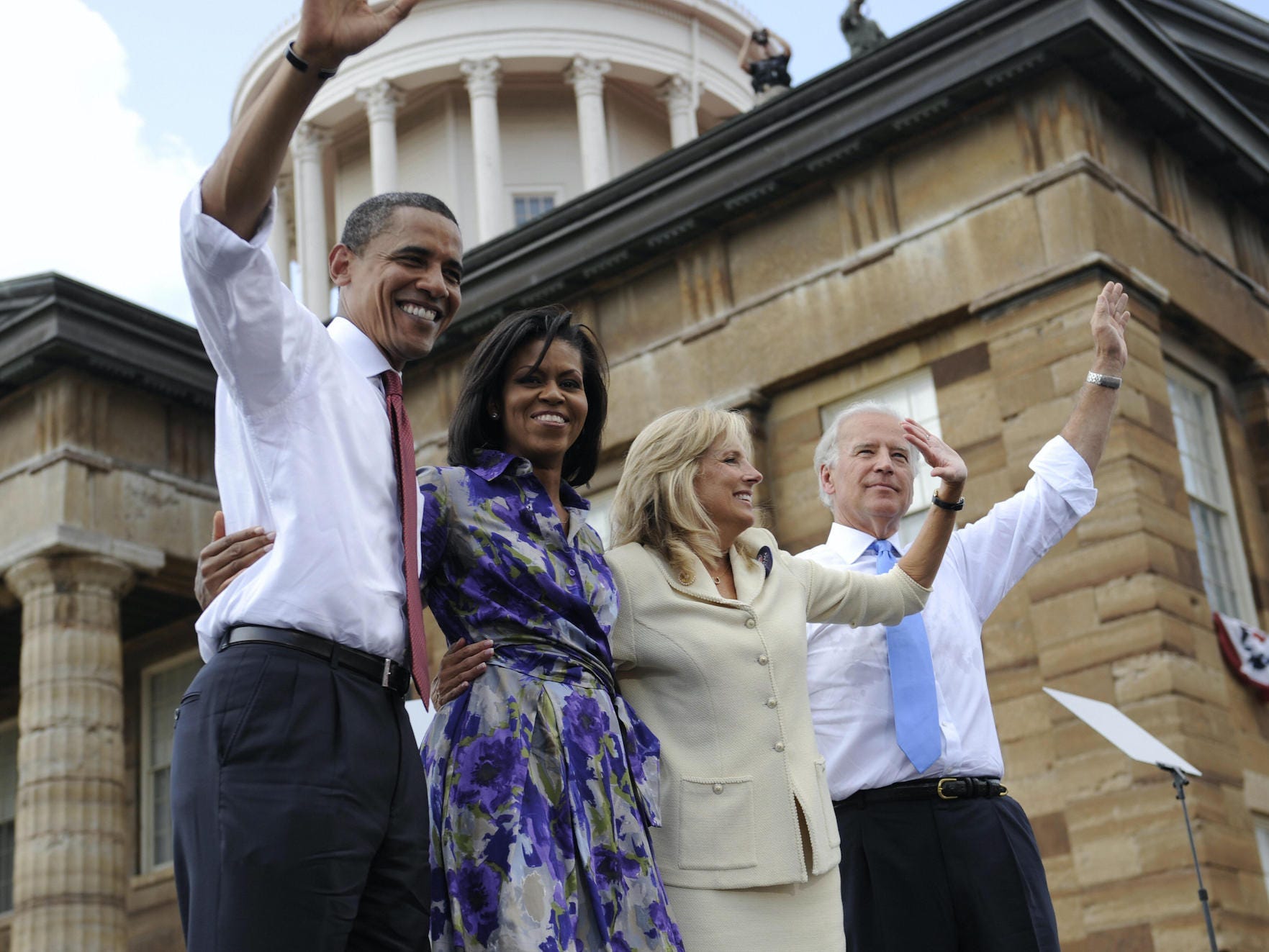 EMMANUEL DUNAND/AFP via Getty ImagesThe Obamas and Bidens during a rally in Springfield, Illinois, in 2008.

The “bromance” between Barack Obama and Joe went viral.

January 2009: Jill held the family’s Bible when her husband was sworn in as vice president.

Brooks Kraft LLC/Corbis via Getty ImagesJoe Biden is sworn in as vice president in 2009.

The Bible has been in the Biden family since the 1890s.

Joe supported her career, too. She made history as the first known second lady to hold a full-time job. She was an English professor at Northern Virginia Community College.

“As second lady, she was teaching full time for eight years, 15 credits a semester,” Joe said in a video shown at the 2020 Democratic National Convention.

She encouraged students to call her “Dr. B.,” according to the Los Angeles Times.

2010: On Valentine’s Day, Joe surprised her with a tree swing marked with a commemorative plaque on the grounds of the vice president’s residence. 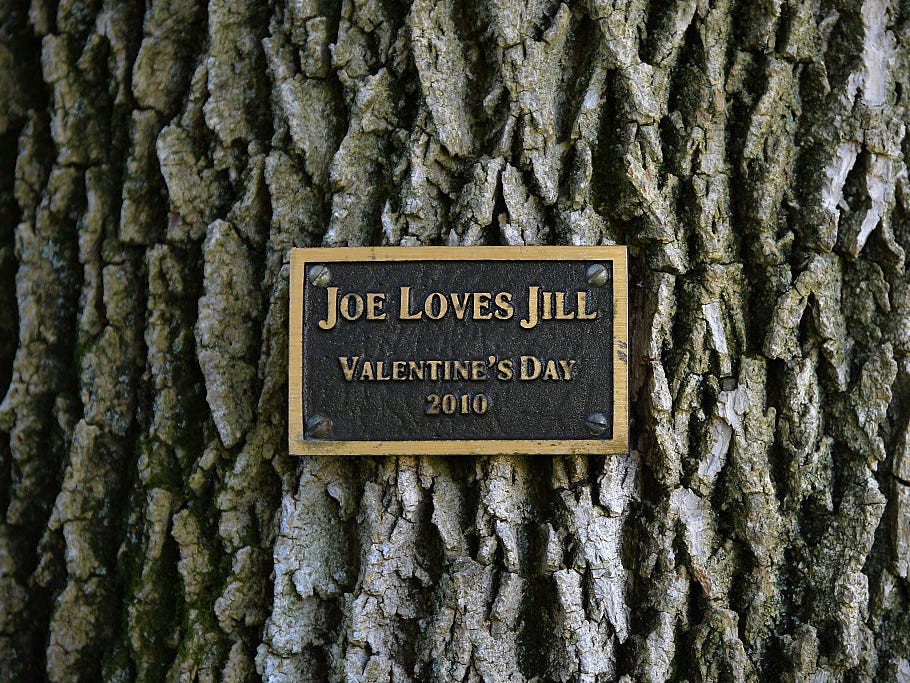 Katherine Frey/The Washington Post via Getty ImagesThe plaque on a tree on the grounds of the vice president’s residence.


Read more:
Read the 13 greatest love letters and tributes from American presidents to their wives

2010: They took diplomatic trips together, such as their visit to Israel. 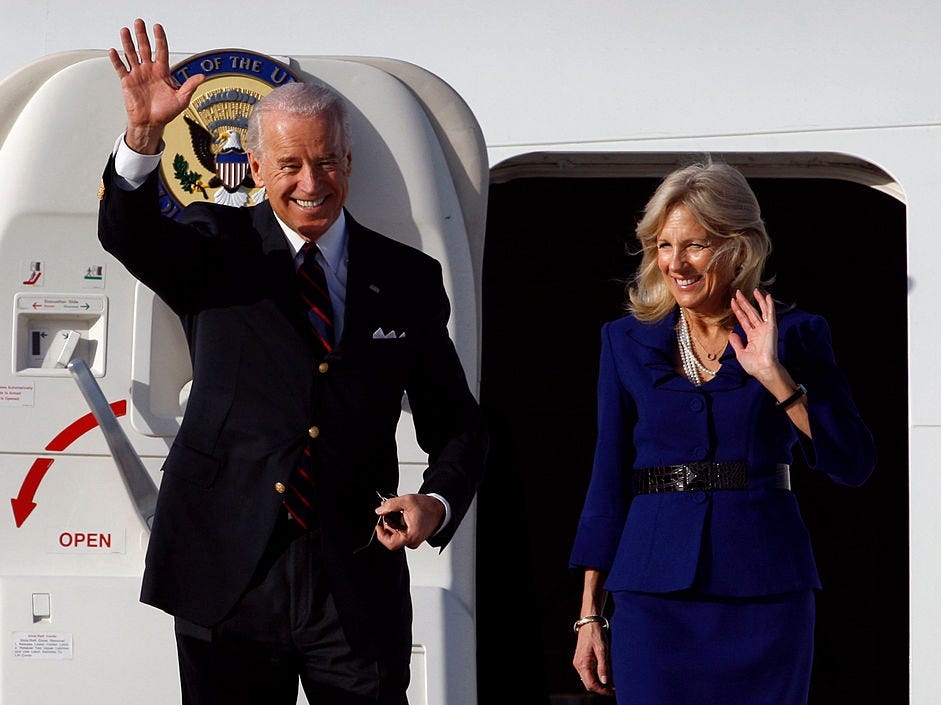 They took other trips together, such as attending the 2010 Olympics in Vancouver.

2012: Jill elicited giggles when she told a crowd in New Hampshire “I’ve seen Joe up close.” 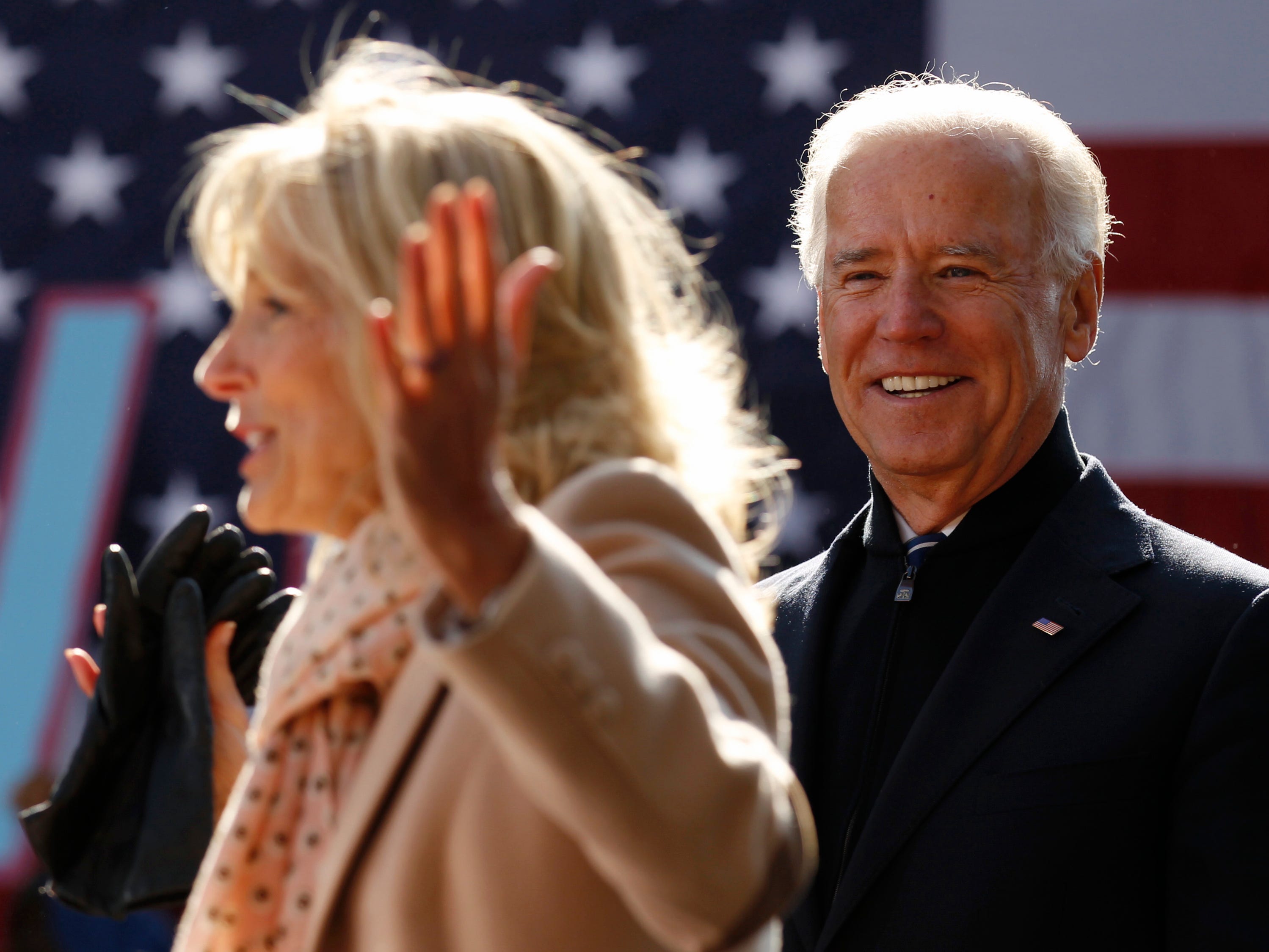 Kevin Lamarque/ReutersJill Biden introduces Joe at a campaign event in 2012.

The camera panned to Joe, who can be seen laughing good-naturedly at the unintended double entendre as the audience cheers.

“It’s in my remarks, really,” she said, before continuing with her speech amid chuckles from the crowd.

2012: At the Democratic National Convention, Jill spoke about Joe’s support for her career and his strength in the face of loss. 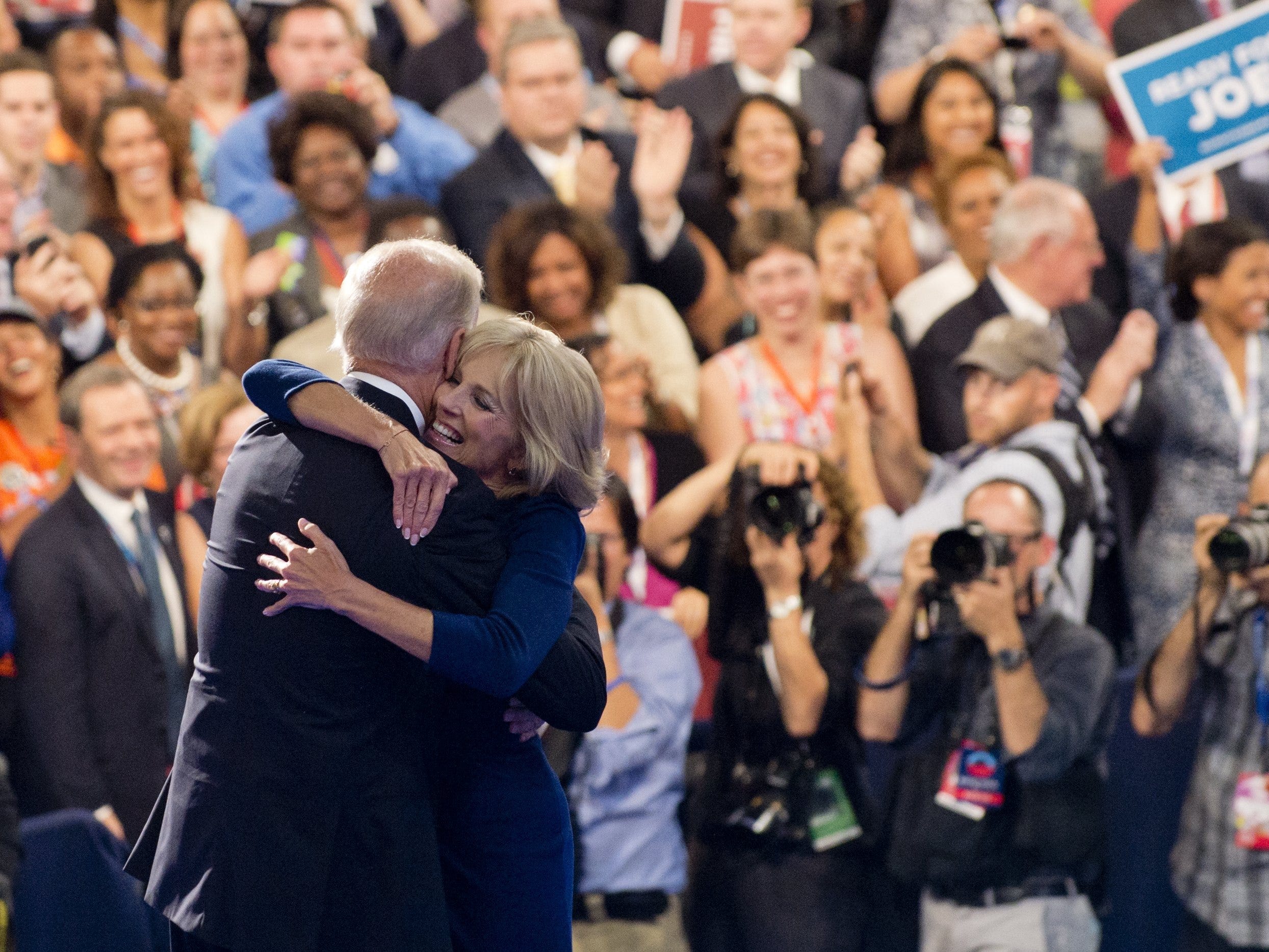 “After Joe was elected vice president, people started questioning whether I could keep teaching,” she said. “Not Joe. He was there standing by my side saying ‘Of course you should. It’s who you are, Jill.'”

2013: When President Obama won a second term, Jill held the Bible again when Joe was sworn in at the inauguration. 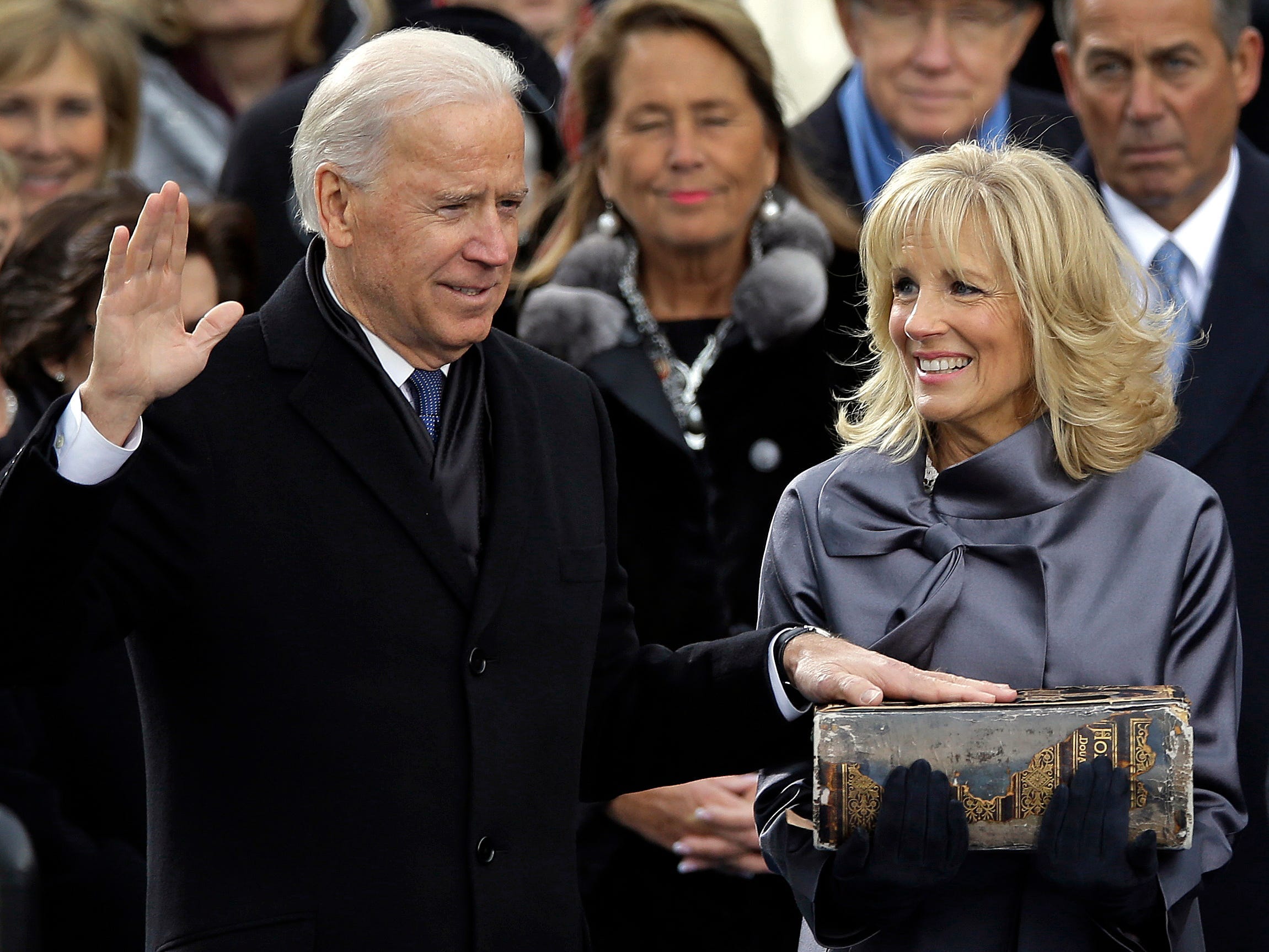 Carolyn Kaster/APJill Biden looks at her husband as he’s sworn in during the 57th Presidential Inauguration in 2013.

As they had in 2009, they danced together at more inaugural balls. 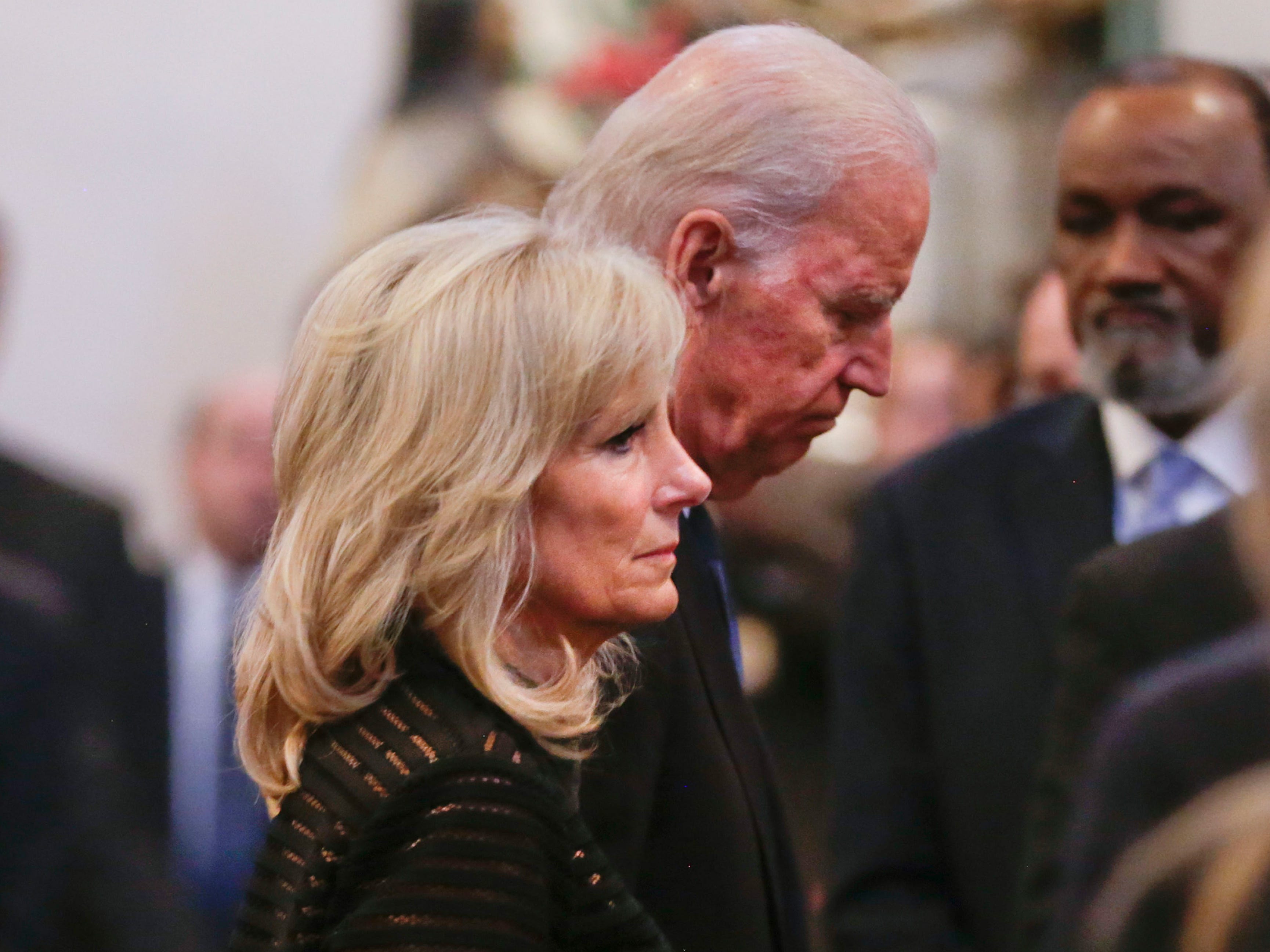 Still reeling from the loss, Joe decided not to run for president in 2016.

2019: Jill released her own book, “Where The Light Enters,” in which she wrote about falling in love with Joe in the early days of their relationship. 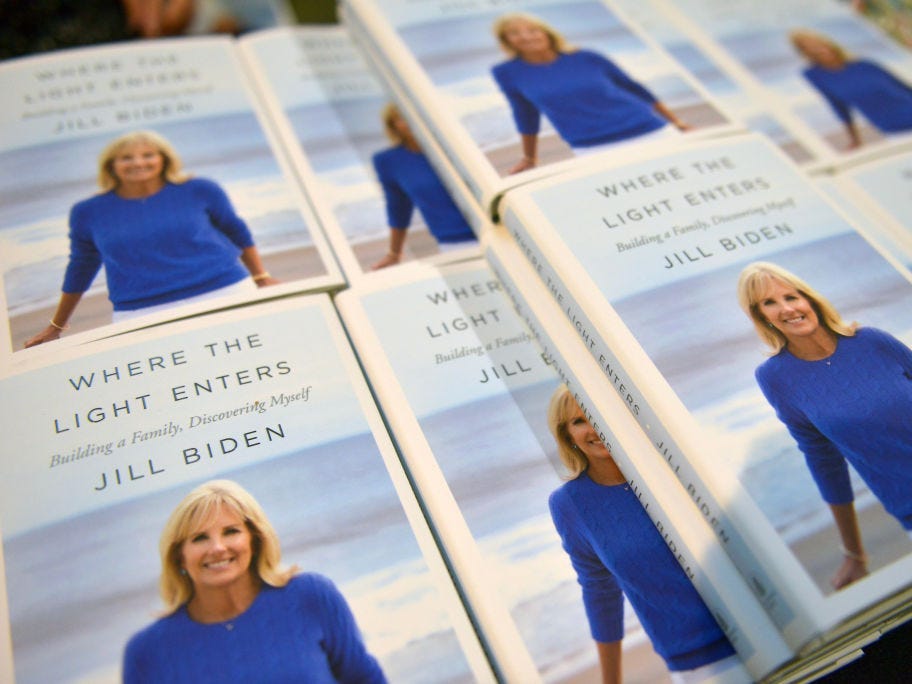 “After the disappointment of my divorce, I never wanted to feel so out of control of my heart again,” she wrote. “But in the months that Joe and I were dating, that desire ran up against a new reality: I was falling in love.”

April 2019: When Joe entered the 2020 presidential race, Jill became an important voice in his campaign. 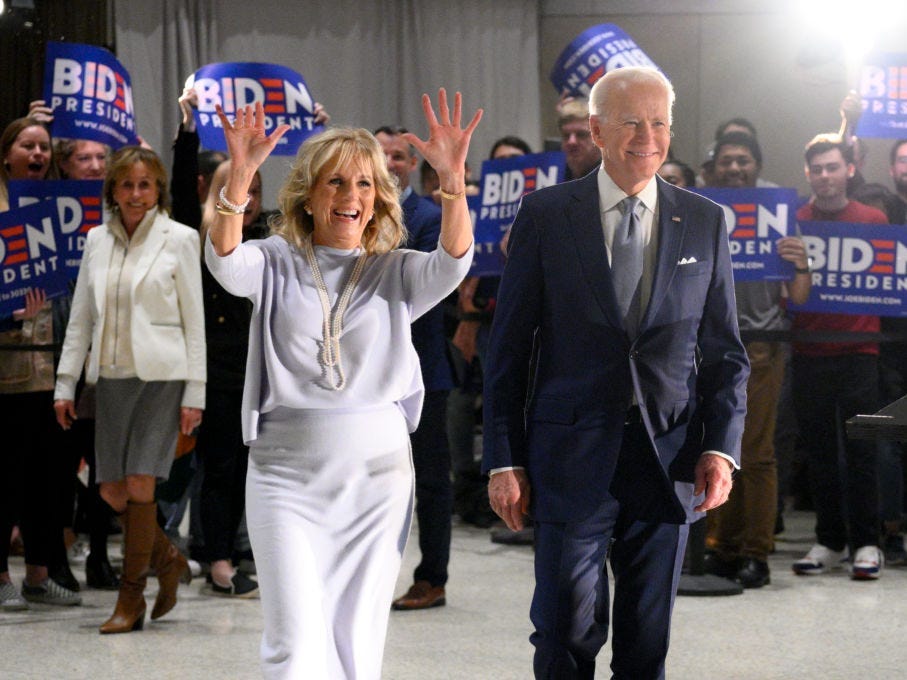 Bastiaan Slabbers/NurPhoto via Getty ImagesJoe and Jill Biden greet supporters and staffers at an event in Philadelphia, Pennsylvania, in 2020.

For the first time since 1981, she took a break from teaching to help him on the campaign trail.

December 2019: In an unusual campaign stop moment, Joe nibbled on his wife’s finger as she spoke to a crowd in Iowa. 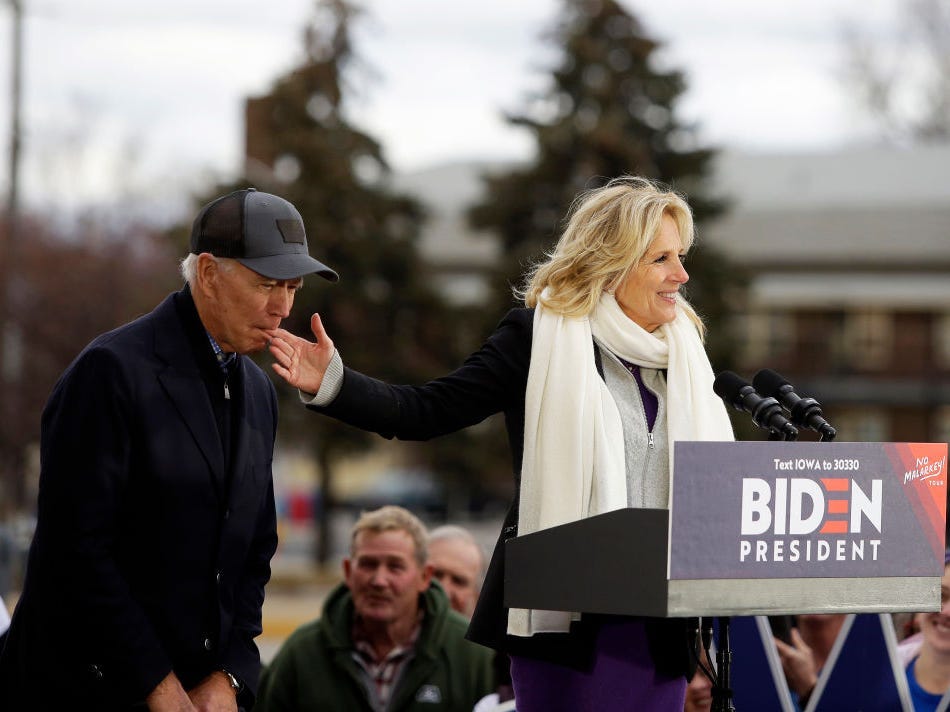 Joshua Lott/Getty ImagesJoe Biden bites the finger of his wife Jill as she introduces him during a campaign event in Council Bluffs, Iowa.

Jill was gesturing behind herself as she spoke, barely missing Joe’s face as he pretended to dodge. Joe then leaned forward while her arm was outstretched and bit down on the tip of her index finger. She appeared to laugh it off.

March 2020: She fought off protesters who stormed the stage on Super Tuesday, leading Joe to joke, “I’m probably the only candidate running for president whose wife is my Secret Service.” 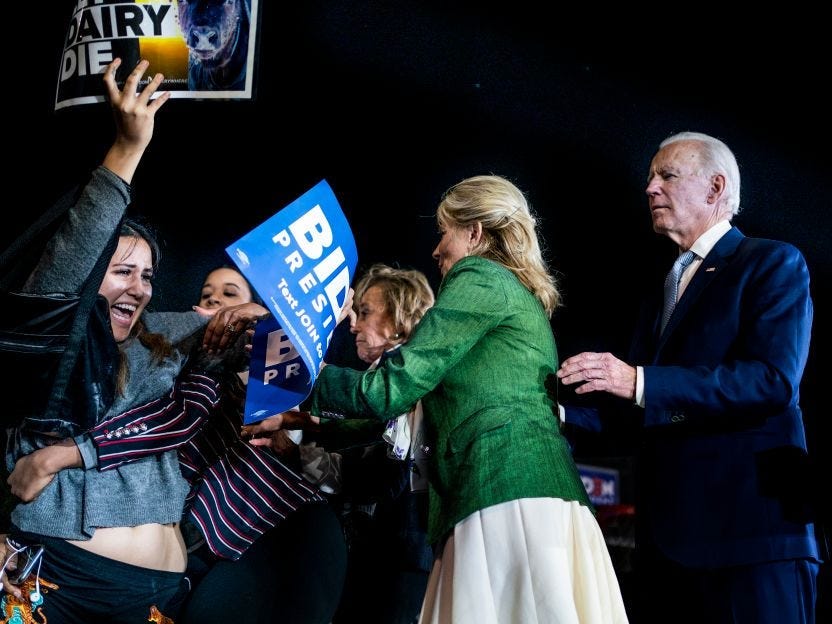 Melina Mara/The Washington Post via Getty ImagesJill Biden fights off protestors that got up on the stage during a Super Tuesday election night party in Los Angeles, California.

“Whoa, you don’t screw around with a Philly girl, I’ll tell you what,” he said. “I thought I heard on the news on the way over that that the committee in charge of Secret Service decided they have to start providing Secret Service for us. I think that’s because they’re afraid Jill’s going to hurt someone. I tell you what man, I married way above my station.”


The life of Jill Biden, an educator who worked full-time while Joe Biden was Vice President, defends him from protesters, and is a crucial part of his 2020 campaign

August 2020: Jill delivered a keynote speech at the Democratic National Convention from the high school classroom in Delaware where she used to teach English.

Handout/DNCC via Getty ImagesA screenshot from the livestream of the 2020 Democratic National Convention.

“Love makes us flexible and resilient,” she said in the speech. “It allows us to become more than ourselves, together, and though it can’t protect us from the sorrows of life, it gives us refuge, a home. How do you make a broken family whole? The same way you make a nation whole: with love and understanding and with small acts of kindness.”

November 2020: Joe won the presidential election, and called himself “Jill’s husband” in his victory speech. 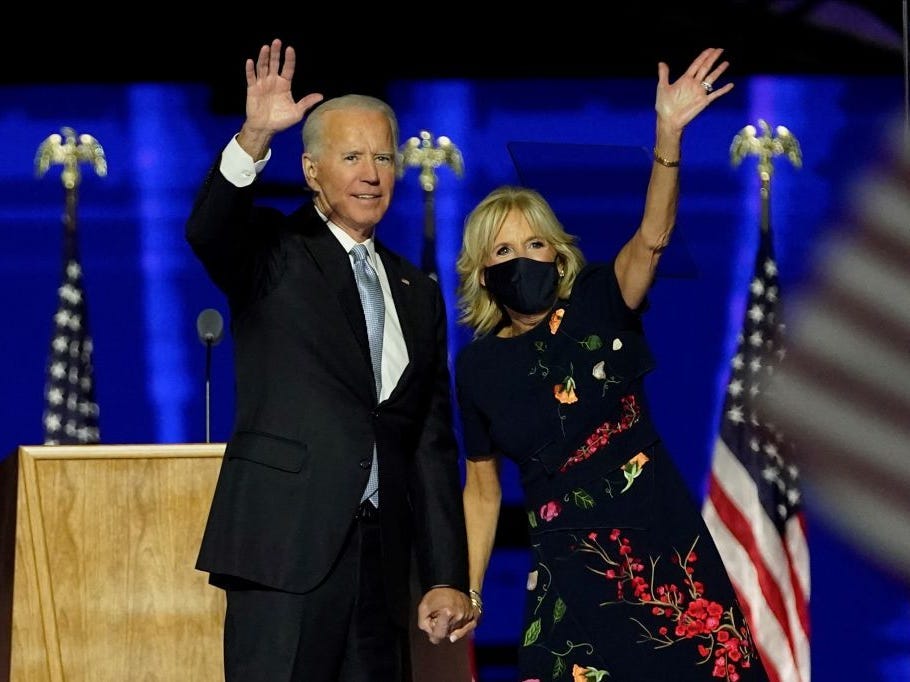 “Jill’s a mum – a military mum – and an educator,” he said. “She has dedicated her life to education, but teaching isn’t just what she does – it’s who she is. For America’s educators, this is a great day: You’re going to have one of your own in the White House, and Jill is going to make a great first lady.”

December 2020: After a Wall Street Journal op-ed urged her to drop her “Dr” title since she’s not a medical doctor, Jill remained proud of her doctorate, and Joe backed her up.

CBSJoe and Jill Biden in an interview with Stephen Colbert.

In an interview with Stephen Colbert, they responded to the controversy.

“That was such a surprise,” Jill said of the op-ed. “It was really the tone of it. He called me ‘kiddo,’ and one of the things I’m most proud of is my doctorate. I mean, I’ve worked so hard for it. And Joe came when I defended my thesis.”

“I got to hand her her doctorate on the stage at the University of Delaware,” Joe added.

Colbert jokingly asked if Joe ever wanted to “get out a length of pool chain and go full corn pop” on people who criticise Jill’s academic achievements. As he began to answer, Jill interjected with “No! The answer is no!” Joe then quipped, “I’ve been suppressing my Irishness for a long time.”

January 2020: Jill held the Biden family Bible for Joe’s inauguration as president of the United States.

The family Bible dates back to 1893. He has used it for his swearing-in ceremonies as a US senator and as vice president.


Read more:
Biden plans to be sworn in as president with a massive family heirloom Bible dating back to 1893