I'm a wildland firefighter in Colorado who's been battling blazes and scrambling to save homes. It's hard to have a social life. 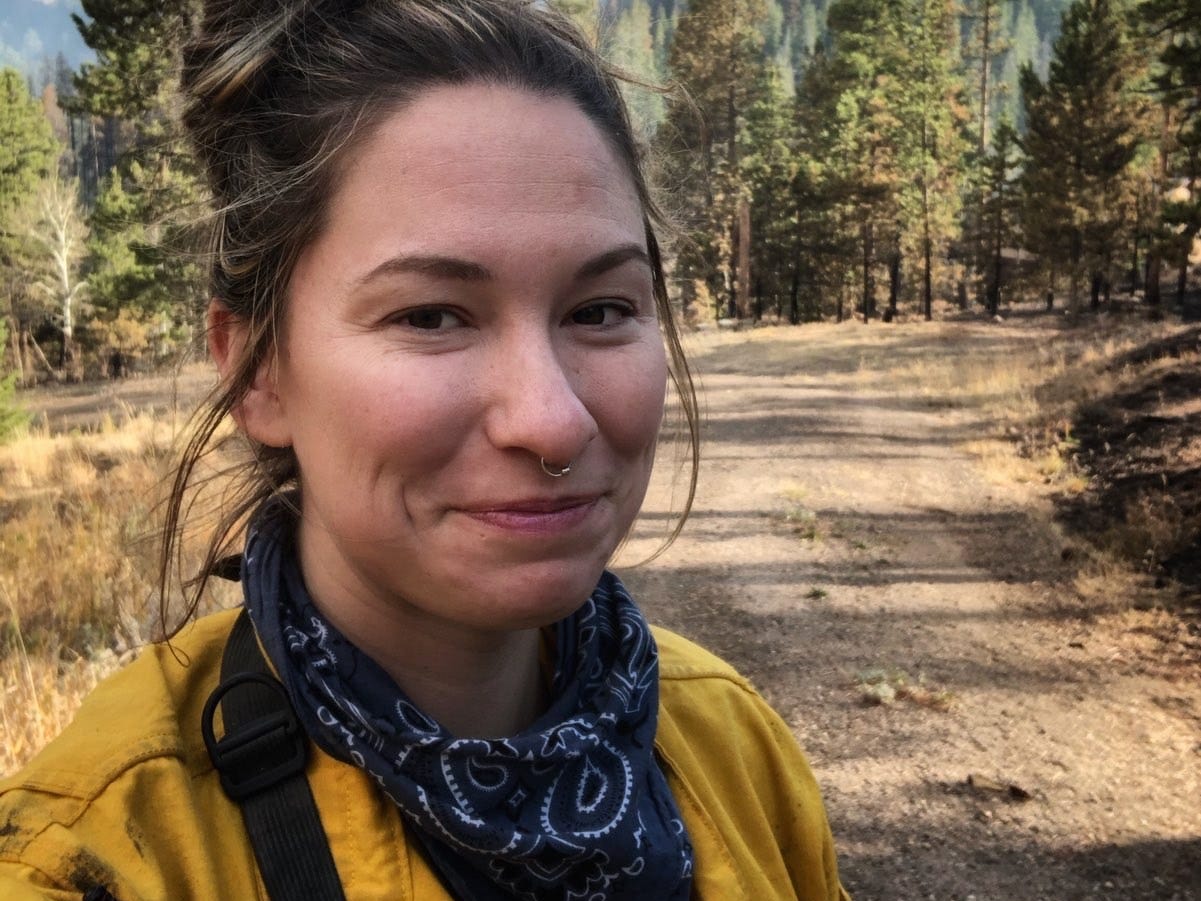 Around noon one day in mid-October, about a week after my last shift, I got the call again. I was still tired, and definitely still bruised, but grateful and ready to hit the line again.

I’m a wildland firefighter and this is my first year working in the field. I work for a contractor that takes requests whenever full-time firefighters need extra bodies. In 2020 so far, that’s been a lot. I’m about to head to Colorado again to help battle the Cameron Peak fire â€” one of the largest in state history.

I’m also one of the few women you might see there.

Although this is my first season making it to a fire, I started my training with this contractor two years ago in Utah where I live. First, I had to pass an exam about the various regulations and safety protocols. I also had to pass a physical test including walking for three miles in less than 45 minutes while wearing a 60-pound pack. The pack wasn’t quite designed for a woman’s chest so I was at a disadvantage. But I made it in 37 minutes.

As a female firefighter I think I tend to work harder because I don’t want to be the weak link. 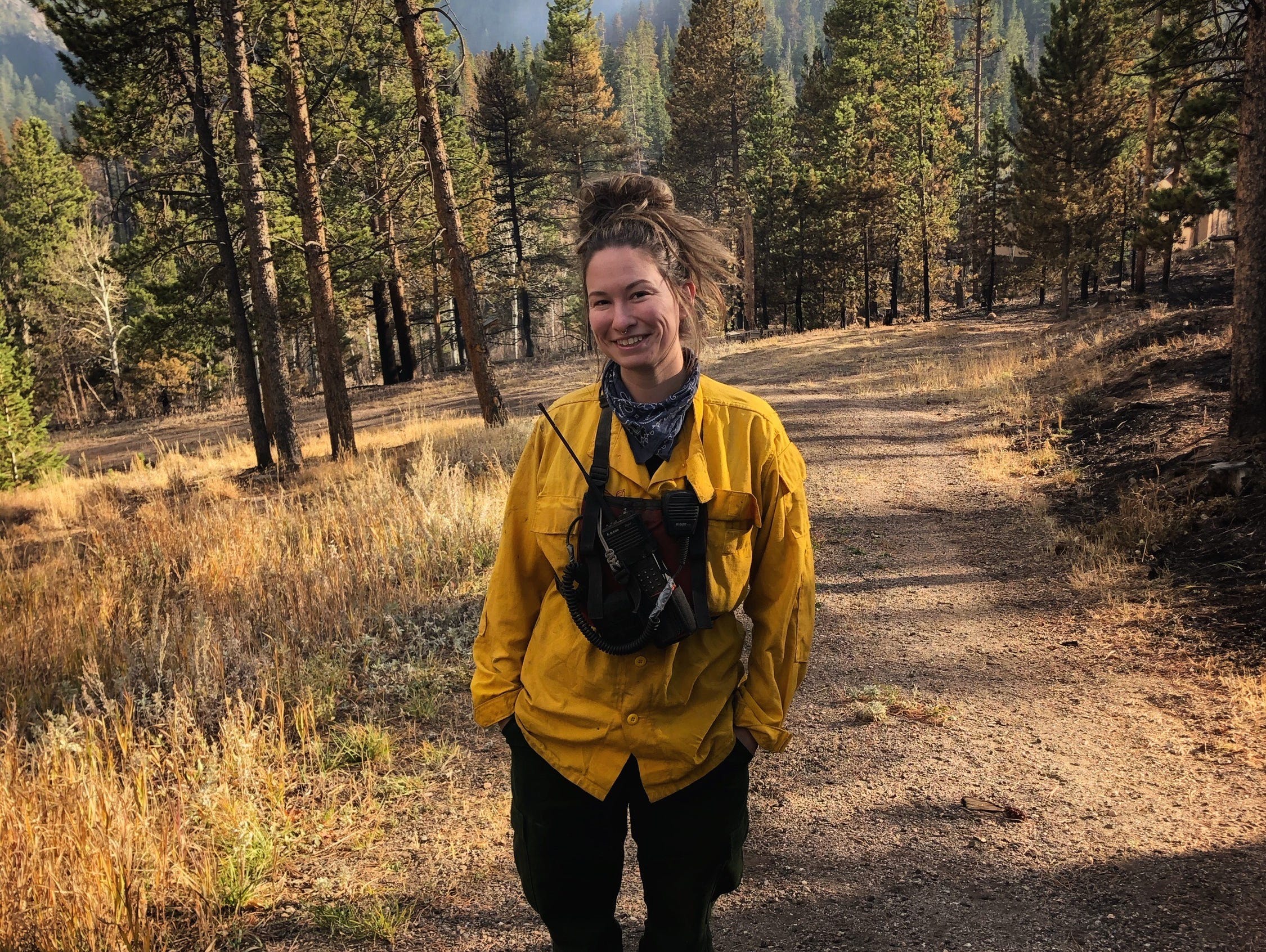 Because there are so few women on fire crews (in Colorado I’ve only seen two others in person), you don’t want your entire gender blamed if you mess up. I’m always trying to work hard to prove myself but at the same time trying to not exhaust my body.

My assignment usually starts with a call. My phone alerts me about various fire’s progress so I have an idea of my chances to get called out. Once my crew activates me I need to be ready within an hour. That’s easy because I leave my bag packed and ready â€” tent, uniform, sleeping bag â€” for two weeks or more of camping near the blaze. The schedule is two weeks on and two days off. After those days of rest I can be called up again or I go home to wait and rest.

An average day at the fire really depends. You could be on the frontline attacking fire with your water truck, or doing controlled burns. You could be watching the fire’s movement, checking if the flames have jumped a road. Further from the line, I would clear debris and dig lines to prevent the fire’s advance. The biggest one I dug with my pulaski shovel was about three feet wide and a hundred yards long.

Being a firefighter involves a lot more than just fighting active flames. 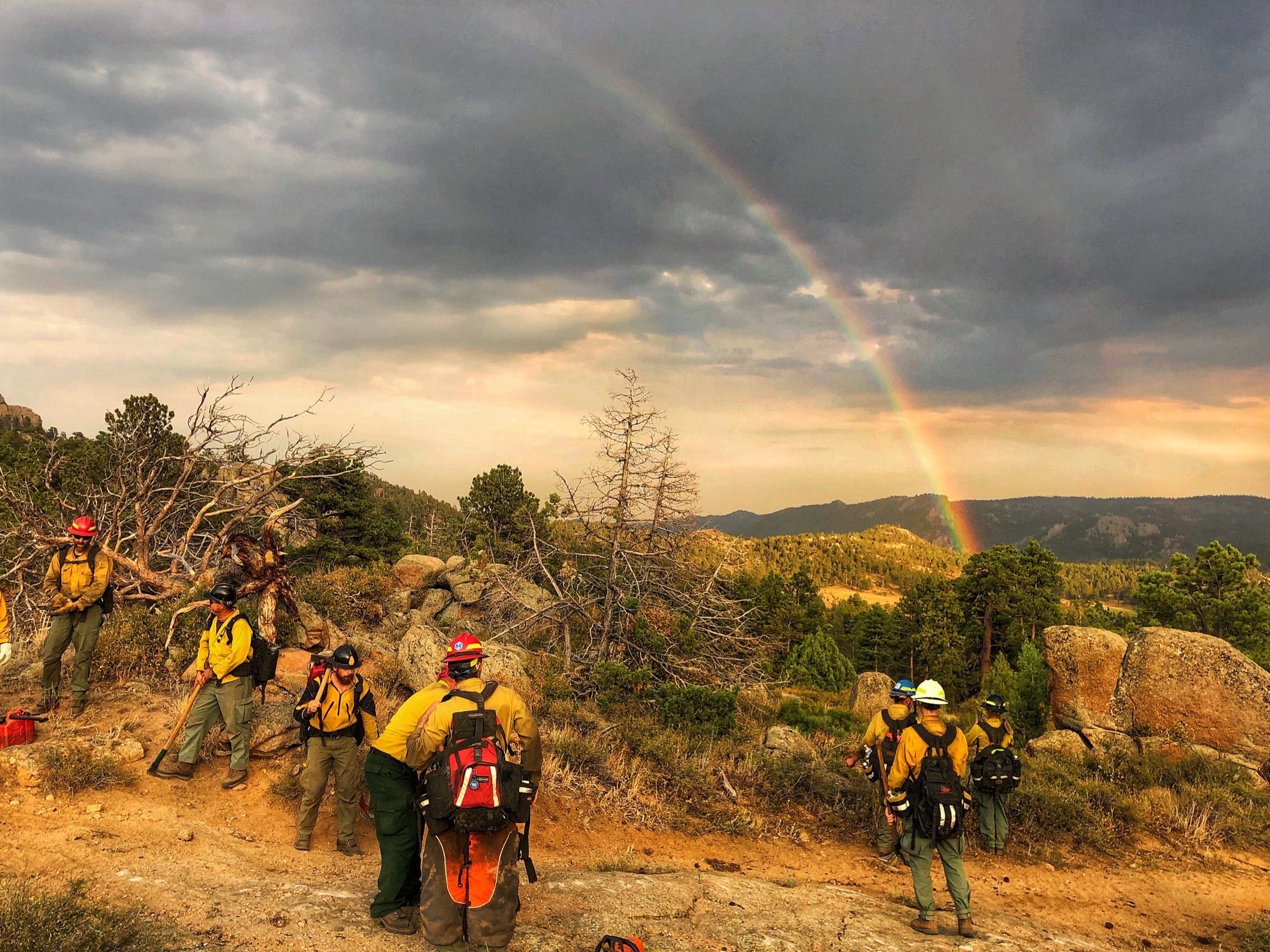 A lot of time is also spent checking structures and homes around the area. We record whether there is anything explosive, like a propane tank, or if trees are limbed high enough. If we think the building needs extra protection, we install water sprinklers. We also sometimes set up a large cistern called a “water pumpkin” to help.

Most locals I come across are very nice, although there was one man who thought the fires were a conspiracy by the government. The fire was approaching his property so we checking the area for hazards. He told us he didn’t want out help, but once he figured out we weren’t federal workers he became more relaxed.

One collection of structures we surveyed because an active fire was approaching included a large Buddhist temple, the Shambhala Mountain Centre, in the middle of the forest in Larimer county, Colorado. I didn’t expect to come across stupas in Colorado, but it was a surprising and welcome site to walk around after a hard day.

No experience stands out as the hardest, but two weeks of near-constant work takes its toll. 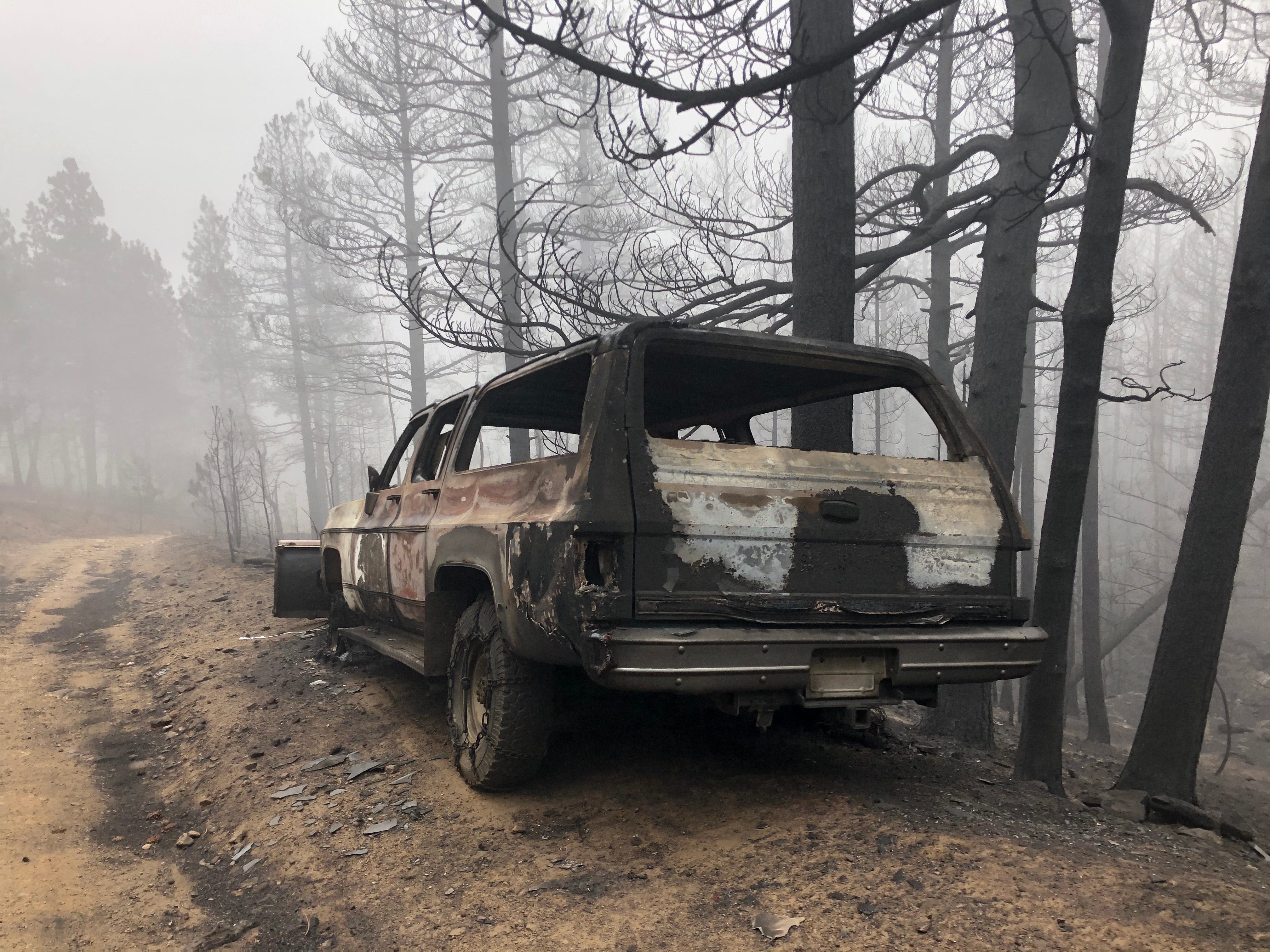 Chelsea PuzzoA car that was caught in a wildfire that Puzzo helped put out.

I’m often moving heavy logs nearly as heavy as my own body weight. Because I don’t have as much upper-body strength as the men, I tend to rely on my legs for leverage. Rolling logs from my legs up to my arms has left me black and blue below the waist.

It can be hot or it can be freezing. We wake at 6 a.m. every morning and work as long as we can and shower once a week. It’s nice to camp for a couple of days, but it gets old quickly. One crew member’s tent was invaded by rodents during my last two-week shift. My tent flew away during a strong wind storm. During an especially cold night we stayed in smelly indoor goat pens at a local ranch. The barn was volunteered by the owners for fire crew use.

There are definitely downsides to being a woman at the fire. You have to share the same porta potties which are designed with a urinal in your face when you sit down on the toilet. You can’t really pee wherever you want like the men. But one of the benefits is that, in the rare cases we get to stay at a hotel, I get my own room. This is a very welcome bit of privacy.

The thing that might surprise people the most about wildland firefighting is the fact that we are constantly working. We rough it more than people realise, it’s definitely not glamping. You’re exhausted and sore, and you’re constantly around the same three people on your crew. Even if you don’t get along, you have to suck it up.

It’s hard to have a social life while working as a firefighter. 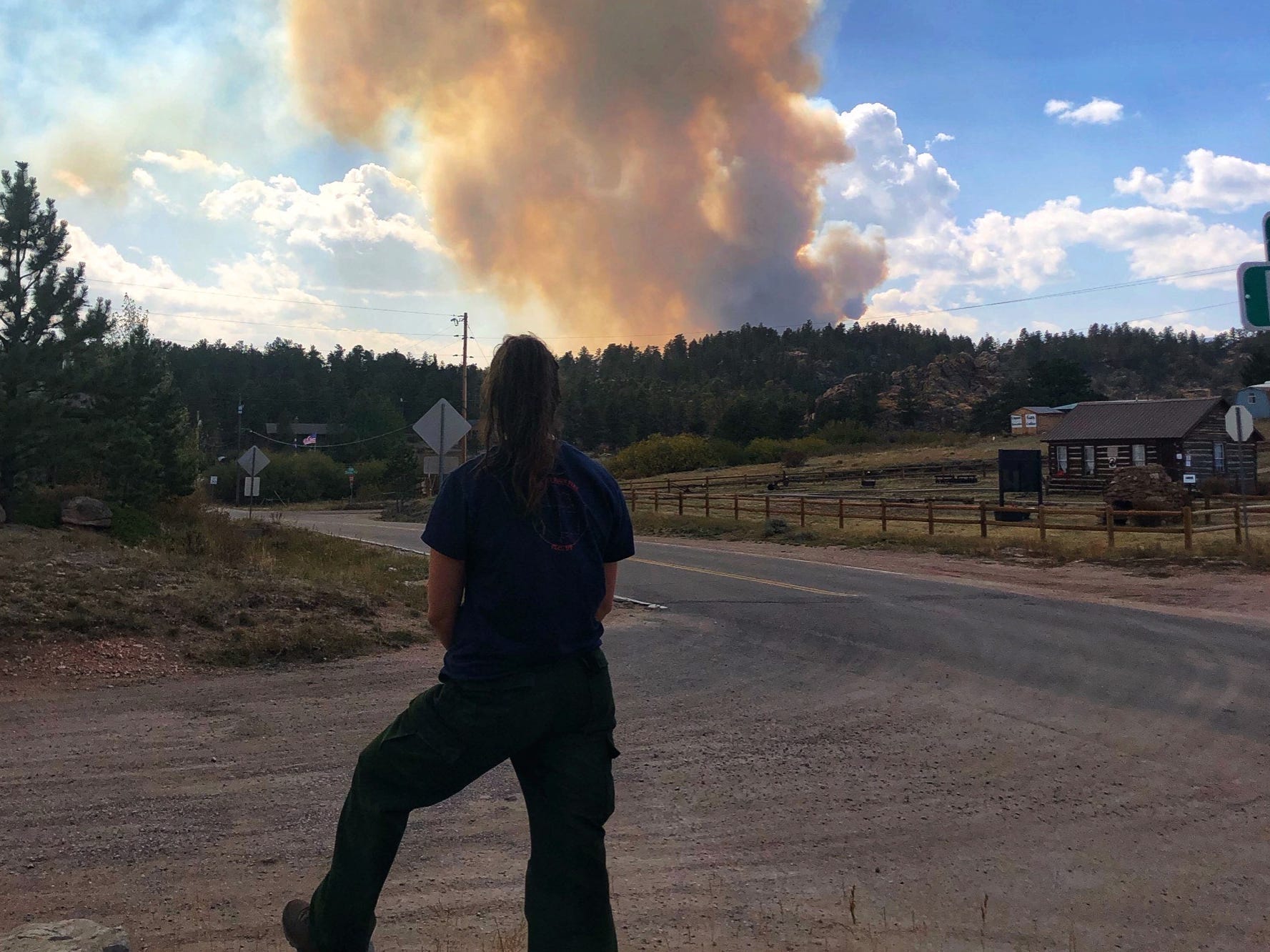 Chelsea PuzzoPuzzo says it’s hard to maintain an active social life being away for two weeks at a time fighting fires.

Once you get home it’s strange to be back around so many people, and your exhaustion finally catches up with you. So far this season, I’ve had no more than four days of rest before getting another call.

My advice for women interested in wildland firefighting is to jump right in. Be tough but also know that it takes some time to adjust to this line of work. Don’t pressure yourself to be the physically strongest person on the team, but do work as hard as you can. After my first time out, I made a lot of friends and was complimented on my work. Other crews even offered to hire me for the next fire.

My advice for homeowners: Keep your trees trimmed, and stop leaving wood piles near your house. Covering your propane tank with brush might look good but is a really bad idea. We’ll be here for emergencies, but it’s important to take preventative measures as well. Do your part.