The FEC says Jill Stein, who raised $7.3 million to recount the 2016 election, owes them more than $66,000 for campaign finance violations

But instead of verifying the outcome of the last presidential election, a majority of the $US7.3 million that Stein raised for counting votes has, per a review of of her campaign’s financial disclosures, been spent on other things.

It went to salaries for her core campaign staff, who were kept on for another three years, lawyers for Stein’s personal legal defence in the US Senate’s Russia investigation, and tens of thousands of dollars in fines levied by the Federal Election Commission.

The Stein campaign is now out of money, still owing tens of thousands of dollars to the FEC for failing to disclose how it was spending donations, mandatory reports sometimes filed over a year late. That means an oft-repeated campaign promise will not be fulfilled: a ranked-choice vote for donors on how to spend any money they gave that wasn’t going toward the original cause.

As Stein’s newly flush campaign said in December 2016, donors would get to choose which “non-partisan election reform and voting rights organisations” would receive such funds, a vote would happen “in the coming weeks.”

Our 161,000 donors will use the democratic process of Ranked Choice Voting to vote on where the surplus will go. https://t.co/7BJpIJjJSv

But rather than a vote, the Stein campaign decided what causes, election-related or not, should benefit from donors’ generosity. More than $US113,000 was spent on legal representation for Stein herself, whose 2016 dinner with Russian President Vladimir Putin had drawn scrutiny from lawmakers investigating the Kremlin’s electoral interference.

The Stein campaign also filed lawsuits. In Wisconsin, it sued for the right to review the source code the state’s voting machines used, dropping at least $US750,000 on attorneys. It ultimately prevailed, but not before running out of the money that the campaign previously said it needed to pay experts to interpet the code.

In Pennsylvania, the Stein campaign spent $US2.25 million in leftover recount money in an effort to get the commonwealth to commit to a paper trail in future elections â€” something its Democratic governor, Tom Wolf, had already ordered counties to do.

That litigation, which resulted in a settlement agreement where the Wolf administration restated its existing efforts to replace voting machines, extended through 2020, with attorneys for Stein arguing that the new machines were not good enough. That argument, rejected in April, resulted in a verbal lashing from US District Judge Paul S. Diamond, who called the litigation “daft,” “ill-considered,” and “pointless,” The Philadelphia Inquirer reported.

“Dr. Stein publicly announced that she seeks to promote election integrity,” the judge continued. But really, he argued, “she seeks to promote only herself,” adding that there was one other benefit from her litigation “that would not otherwise have been conferred: the payment of $US150,000 to Stein’s lawyers.”

The lawsuits in Wisconsin and Pennsylvania were pricey. The litigation far exceeded the total legal expenses of $US1.75 million that the Stein campaign said it would need when raising donations for the 2016 recount; ongoing litigation was said to cost to more than $US150,000.

Back in 2016, the campaign also asserted that, rather than new lawsuits, post-recount, “Any state filing fees that are refunded will be allocated to the organisations designated by the donors.” Those 2016-era refunds, from Michigan and Wisconsin, totalled more than $US2.1 million.

Surplus recount funds must be returned to us, so we can distribute it based on how our 161,000 donors decide. https://t.co/SC1uMfmhGw

Stein did not respond to a request for comment. Her campaign, likewise, has gone dark: a website set up to provide updates on recount spending and election-adjacent litigation is now defunct.

The campaign also went about 14 months without filing mandatory spending reports with the FEC, prompting tens of thousands of dollars in new fines. Only after Business Insider began making inquiries did the campaign break its silence, revealing that it had just under $US83,000 in cash on hand â€” and outstanding debts totalling more than $US87,000, including $US15,000 owed to a media consultant and $US16,800 to Hustle Inc., a phone-banking software firm.

Judith Ingram, an FEC press officer, told Business Insider that, by not filing its quarterly reports, the Stein campaign racked up $US55,000 in fines between July 2019 and September 2020. In total, the Stein campaign has been assessed penalties of more than $US124,000 since its 2016 recount haul, according to a tally Ingram provided Business Insider.

It now has an unpaid FEC bill of more than $US66,000; a July 30 letter from the commission warns of further “civil money penalties, suspension of matching funds payments, and audit, or legal enforcement action.”

Stein’s 2016 campaign staff, by contrast, appear to have been paid regularly â€” and rather generously. In December 2016, donors to the recount effort were told staff payroll would account for no more than 3% of the money raised, or $US212,500.

But Stein’s employees have received more than five times that amount: through the end of 2019, nearly $US1.2 million, according to campaign filings with the FEC.

Nearly a quarter of the promised payroll was doled out at once, in the immediate aftermath of the recount fundraiser, when staff received a round of “performance bonuses” totaling $US48,700.

David Cobb, Stein’s campaign manager, received a 60% raise after the election. In a 2018 email, he described his post-recount position, at an annual salary of $US97,000, as providing oversight of ongoing litigation and support for compliance with the FEC. All told, Cobb collected more than $US278,000 from November 2016 to December 2019.

Matt Kozlowski, Stein’s campaign finance director, also received a bump in pay: from $US3,840 a month before the November 2016 election to $US7,160 in the months following, an increase of 54% that lasted until December 2019. His title: director of compliance.

Kozlowski has a similar title, finance director, at the Tenant Resource Centre in Madison, Wisconsin, a job he held while also collecting over $US298,000 from the post-election Stein campaign. Reached for comment, Kozlowski said he is “no longer employed by the campaign.”

Together, Cobb and Kozlowski earned upwards of $US576,000, or more than twice the total payroll costs that Stein’s donors were initially promised.

Our 161,000 grassroots donors will decide where to send #Recount2016's surplus through the democratic process of Ranked Choice Voting. pic.twitter.com/nxTFAZOya0

Kozlowski and another Stein campaign employee, Dave Schwab, did more than just work for Stein’s presidential and recount campaigns. Each also contributed blog posts to “Green Uprising,” a political action committee that Stein launched in 2018. As the campaign acknowledged on its site, “the Jill Stein for President team is â€¦ now producing content as Green Uprising.”

Ingram, the FEC press officer, said “payment to a staff member for work performed for a different federal committee could constitute an in-kind contribution to the recipient committee.” In other words, working for one committee while volunteering for another could be counted as a donation, time equaling money.

The group, which is still accepting donations, now appears to be dormant, having never filed paperwork with the FEC. According to an FEC tutorial, PACs generally need to register with the commission if they raise or spend more than $US1,000.

Attempts to reach Stein were unsuccessful

Attempts to reach the Stein campaign were not successful: email addresses listed on the 2016 campaign site bounced back, and Stein herself did not respond to a message on Facebook. A spokesperson for the US Green Party also told Business Insider that they had reached out to Stein for comment. Stein is not running in the 2020 election.

It’s unclear if or how Stein intends to pay the FEC fines. What is clear is that now is too late to ask Stein’s recount donors how their money should be â€” or should have been â€” spent. 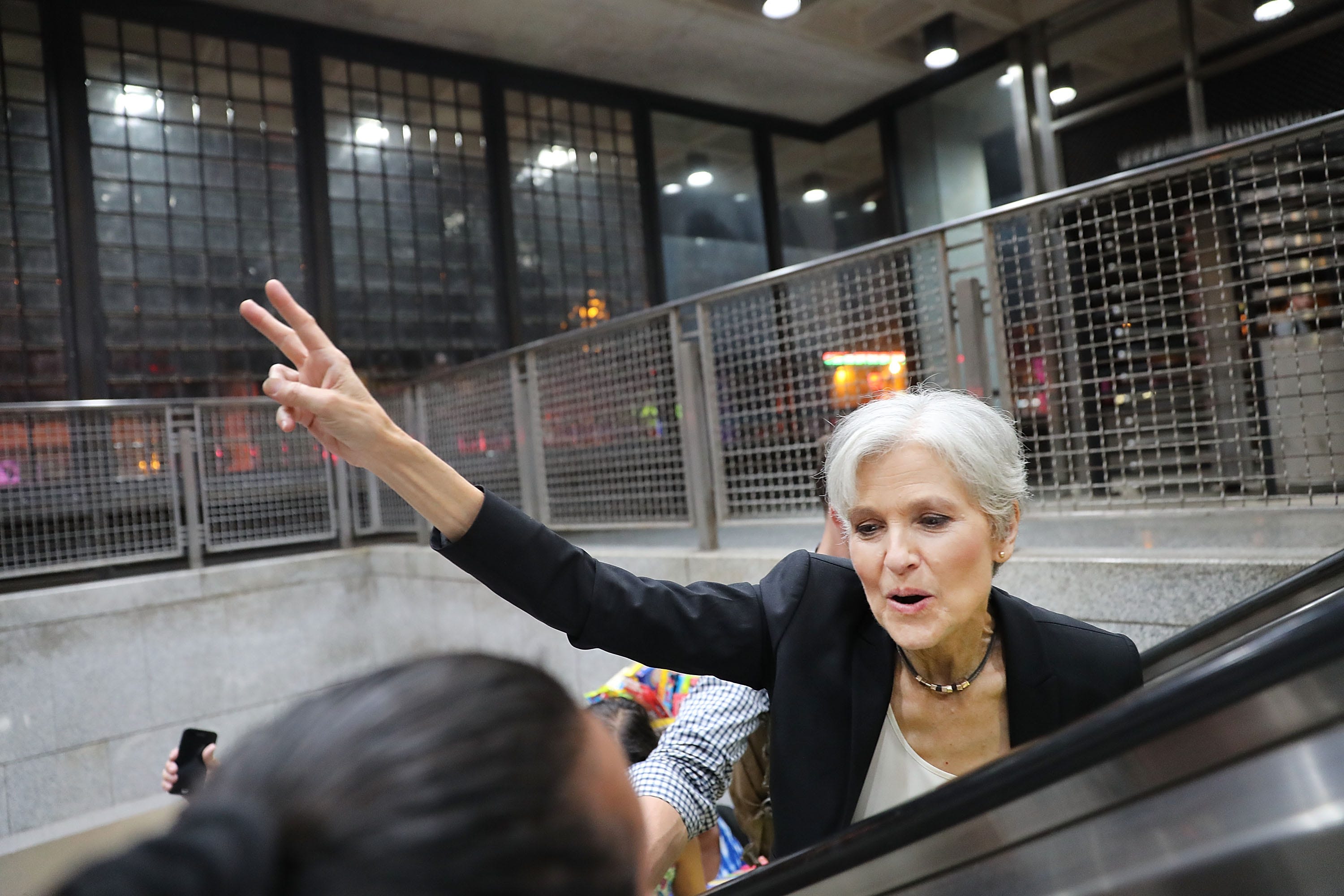 Erin Tibe, a campaign finance lawyer at Sandler Reiff Lamb Rosenstein & Birkenstock, told Business Insider that the FEC will almost certainly never collect money for the penalties it assessed. Usually, she said, the commission simply shuts down a debtor campaign committee rather than try to collect “fines they can’t be forced to raise money to pay.”

What should the FEC do â€” make them hold another fundraiser?

Political campaigns can also promise to raise money for one thing, like a recount, and spend it on another, like generous salaries and an unrelated legal defence before the US Senate.

“Candidates have a lot of flexibility on how excess campaign funds are used,” Tibe said. “There is a catchall for ‘any lawful purpose’ as long it’s not for the candidate’s own personal use.”

Donors to a recount effort that largely stalled before it ever started don’t have any legal recourse. But they do have anger.

“I’m very embarrassed, and I think she’s a charlatan,” said one woman who promoted Stein’s recount fundraiser on social media, asking that her name not be used for professional reasons. Her identity is known to us.

“I felt quite panicked about Trump becoming president and was grasping at draws,” she told Business Insider. “I think she’s a con woman and I was a mark.”