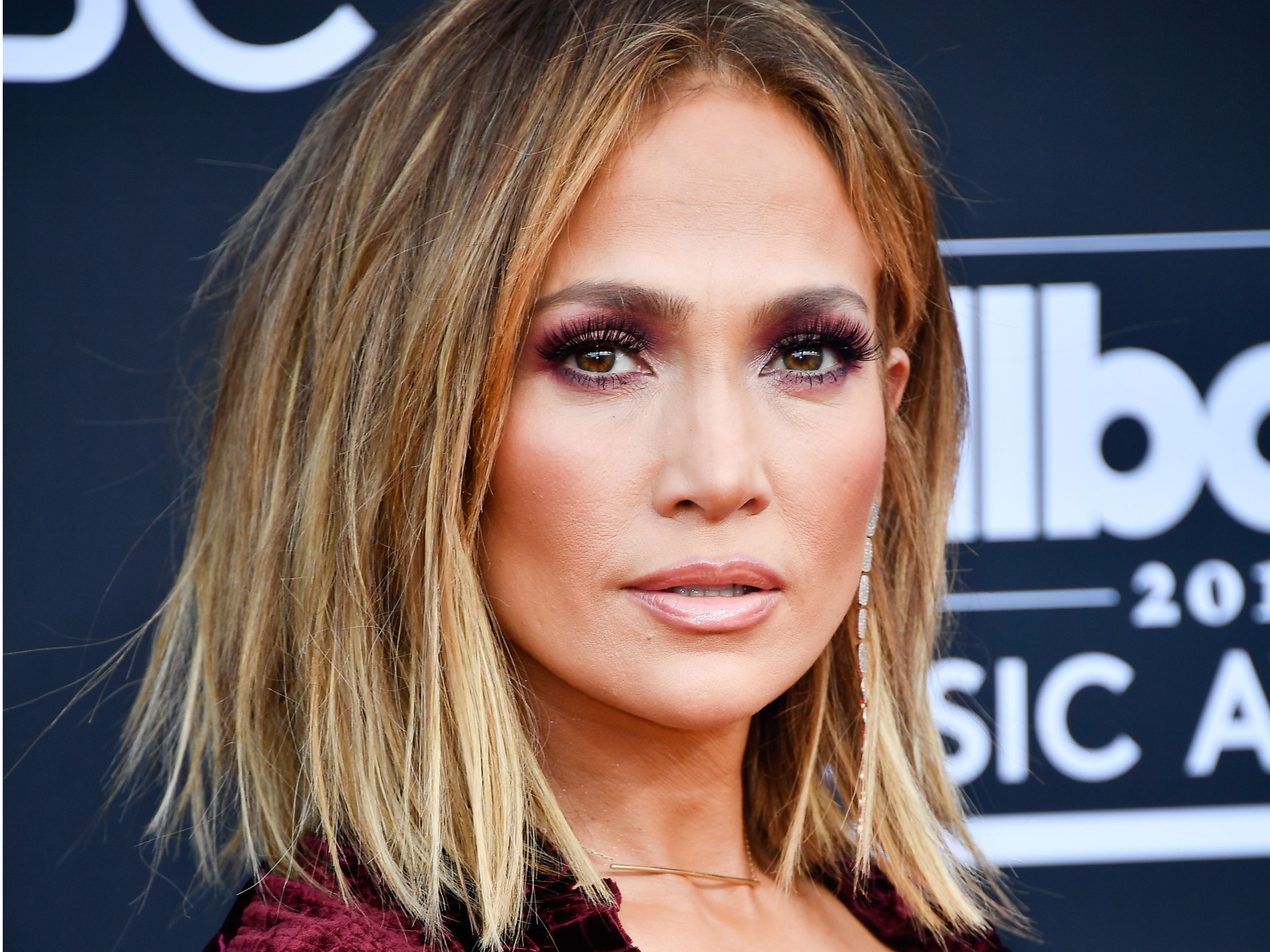 Jennifer Lopez has had an illustrious career as a performer, singer, and actor, and her on-screen style has reflected and inspired real-life fashion trends.

From rocking Selena’s signature, sparkly styles to donning all-black outfits for fight scenes, Lopez has had the opportunity to rock some iconic looks.

Here are some of Lopez’s best on-screen fashion moments.

Lopez made it big portraying the famous singer and fashion icon in “Selena” (1997). 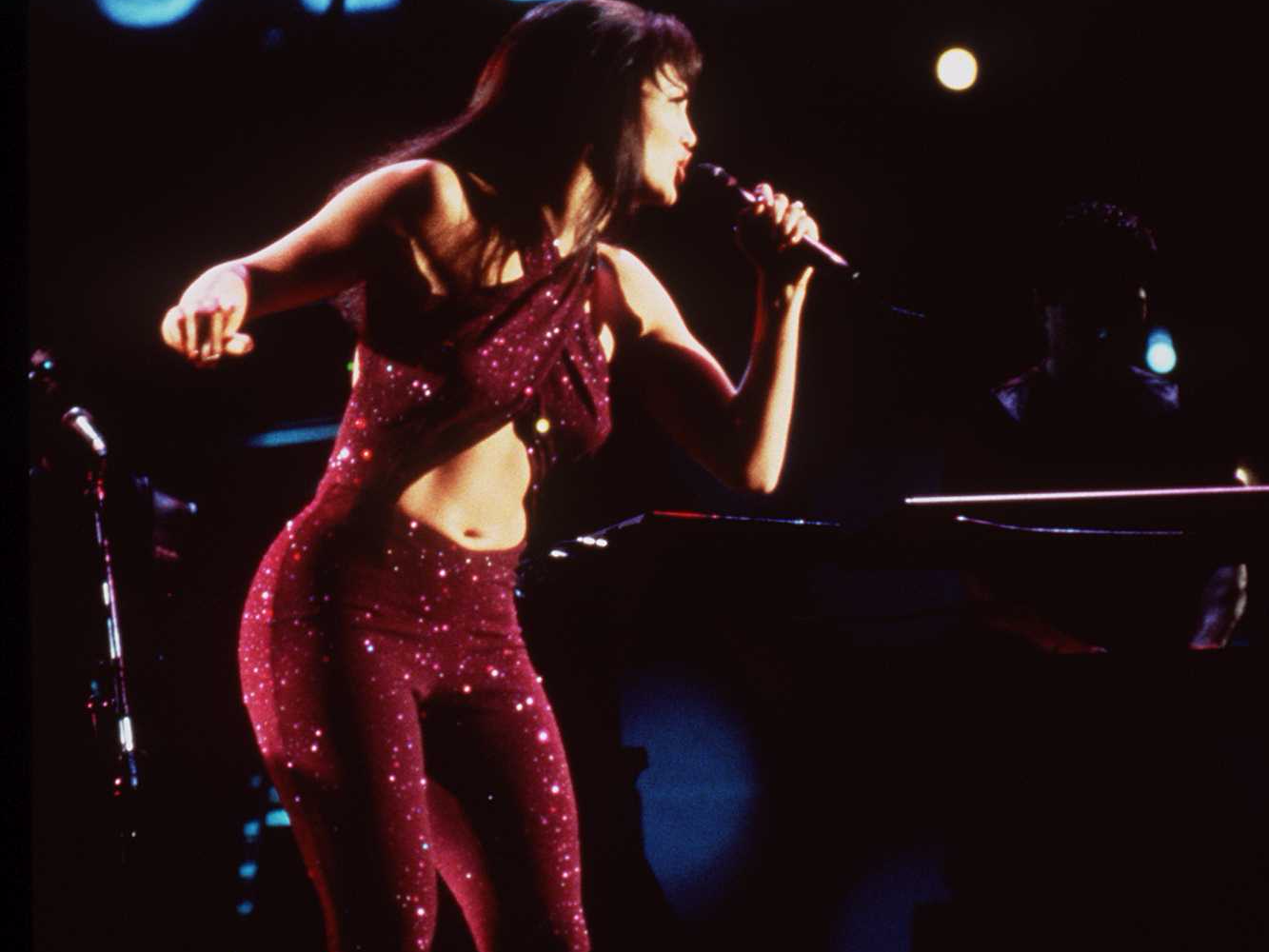 After the tragic death of Selena Quintanilla-Pérez – known as Selena – in 1995, Lopez had the difficult task of honouring the late singer in the 1997 biopic.

The film’s costume designer, Elisabetta Beraldo, told Billboard in 2017, “… [Lopez] had an incredible sense of who Selena was because she spent four months living with her family. If I presented her options, even if it was an everyday look, she would always choose the one that would be truer to Selena, and not simply her own style.”

Beraldo also said that it took six weeks to recreate all of Selena’s famous outfits, including this sparkly, maroon number. 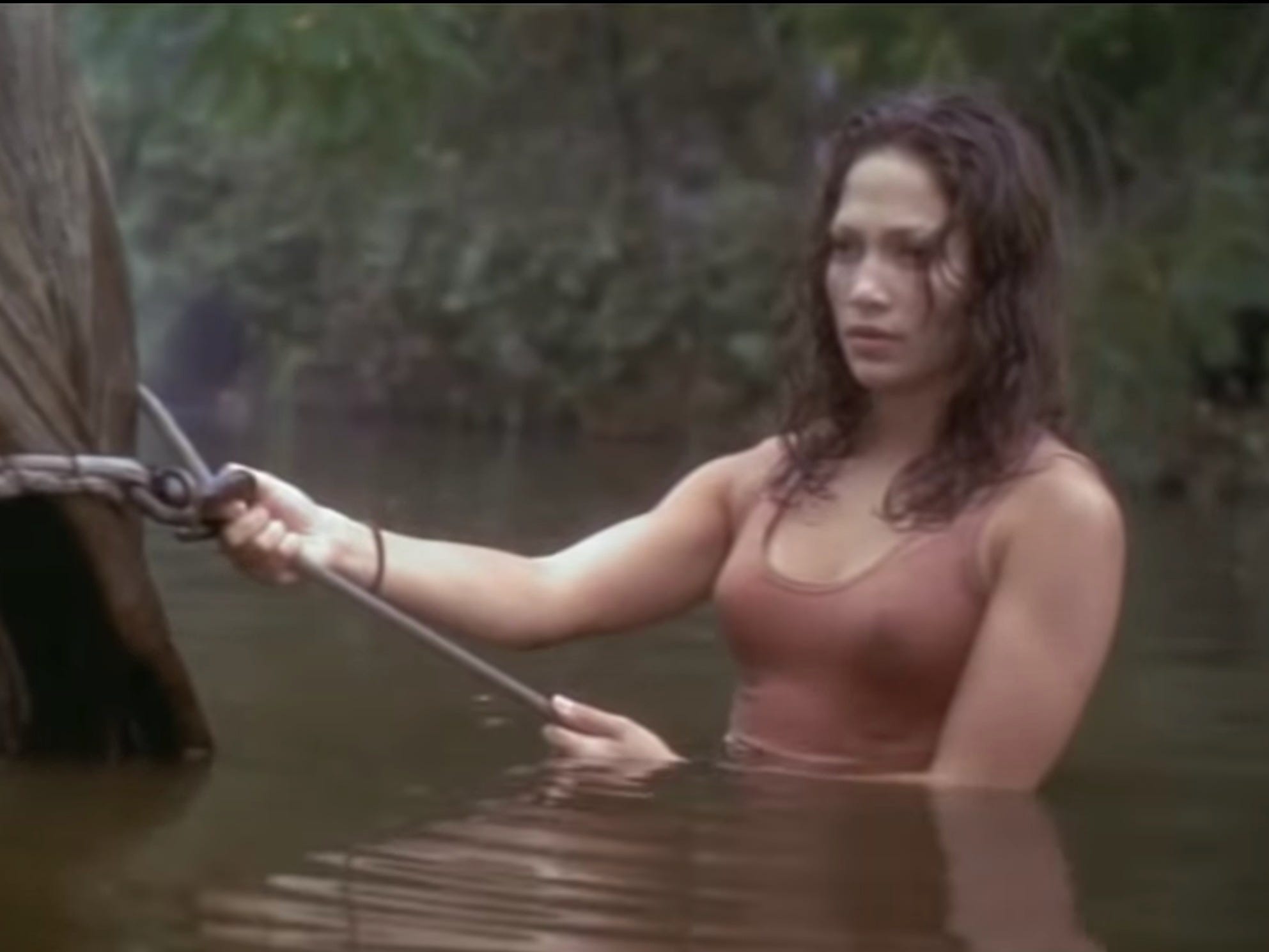 The action film is better known for its low-quality special effects than its fashion moments, but it gave us a chance to see a rugged version of Lopez’s movie style.

As she’s escaping the wrath of a malicious snake, Lopez wears flowy pants and neutral tank tops that show off her well-defined arm muscles. 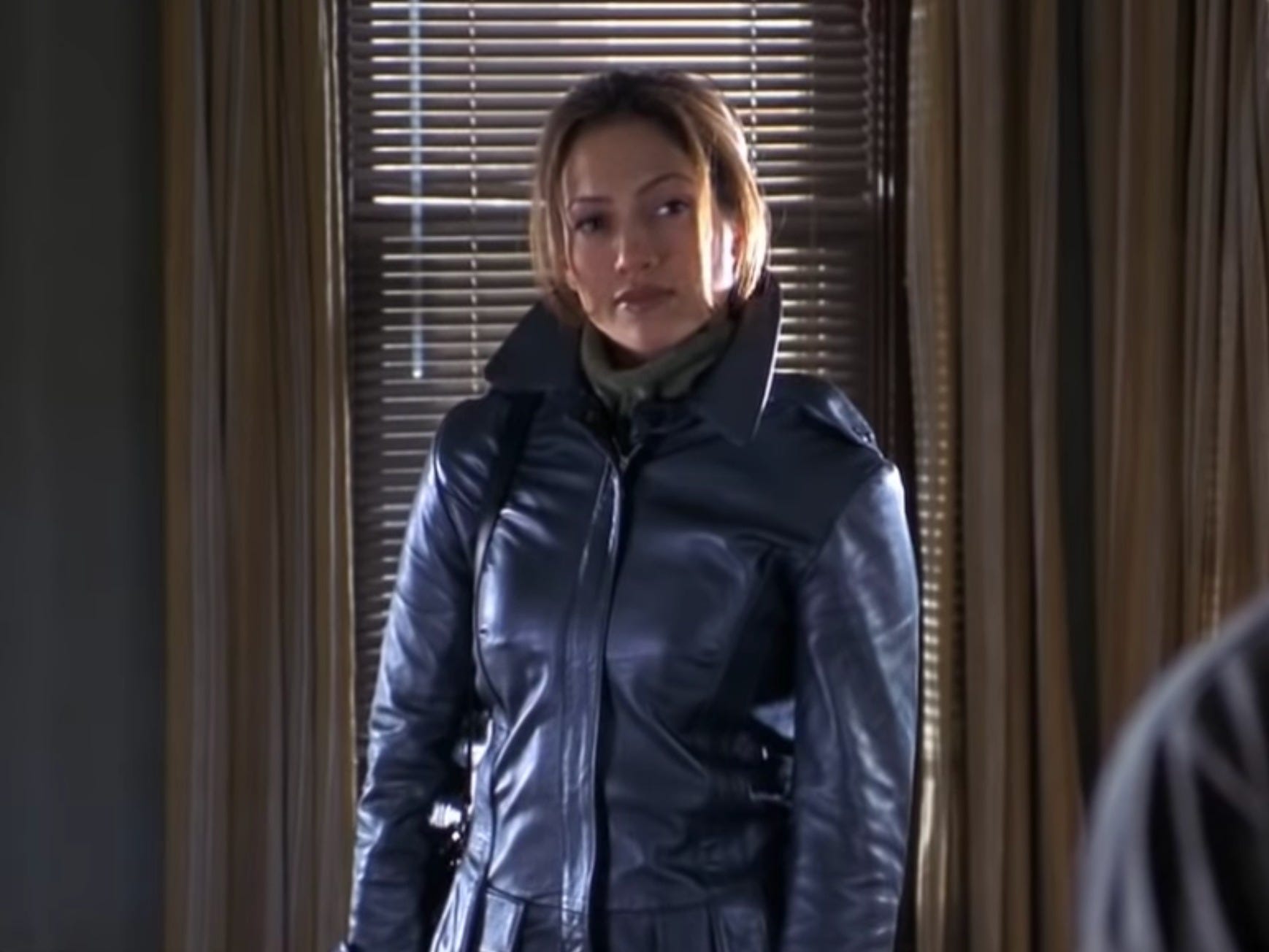 Universal PicturesJennifer Lopez in ‘Out of Sight.’

The action flick received rave reviews from critics, and the actress’s style was all business.

Lopez has a tailored look in many of the movies in her filmography, but in “Out of Sight,” small touches like a popped collar on her blue leather jacket gave her a bit of an edge. 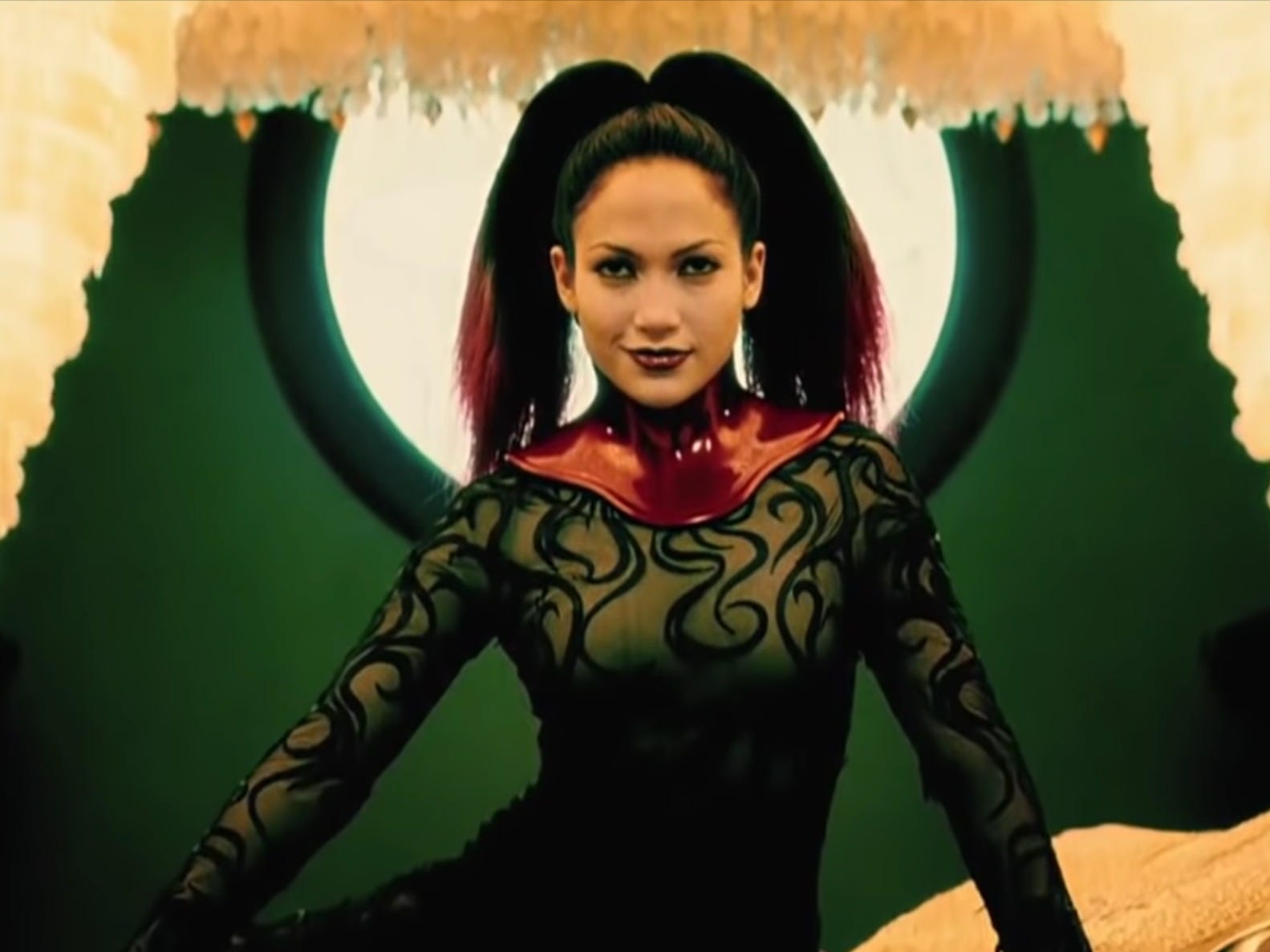 In 2000, Lopez starred as a child psychiatrist who enters the mind of a comatose serial killer in the science-fiction horror film, “The Cell.”

Although the film received mixed reviews, one thing everyone could agree on was how memorable Lopez’s outfits were, including this skin-tight bodysuit with a shiny red collar feature.

Lopez donned another stylish leather jacket in “The Wedding Planner” (2001). 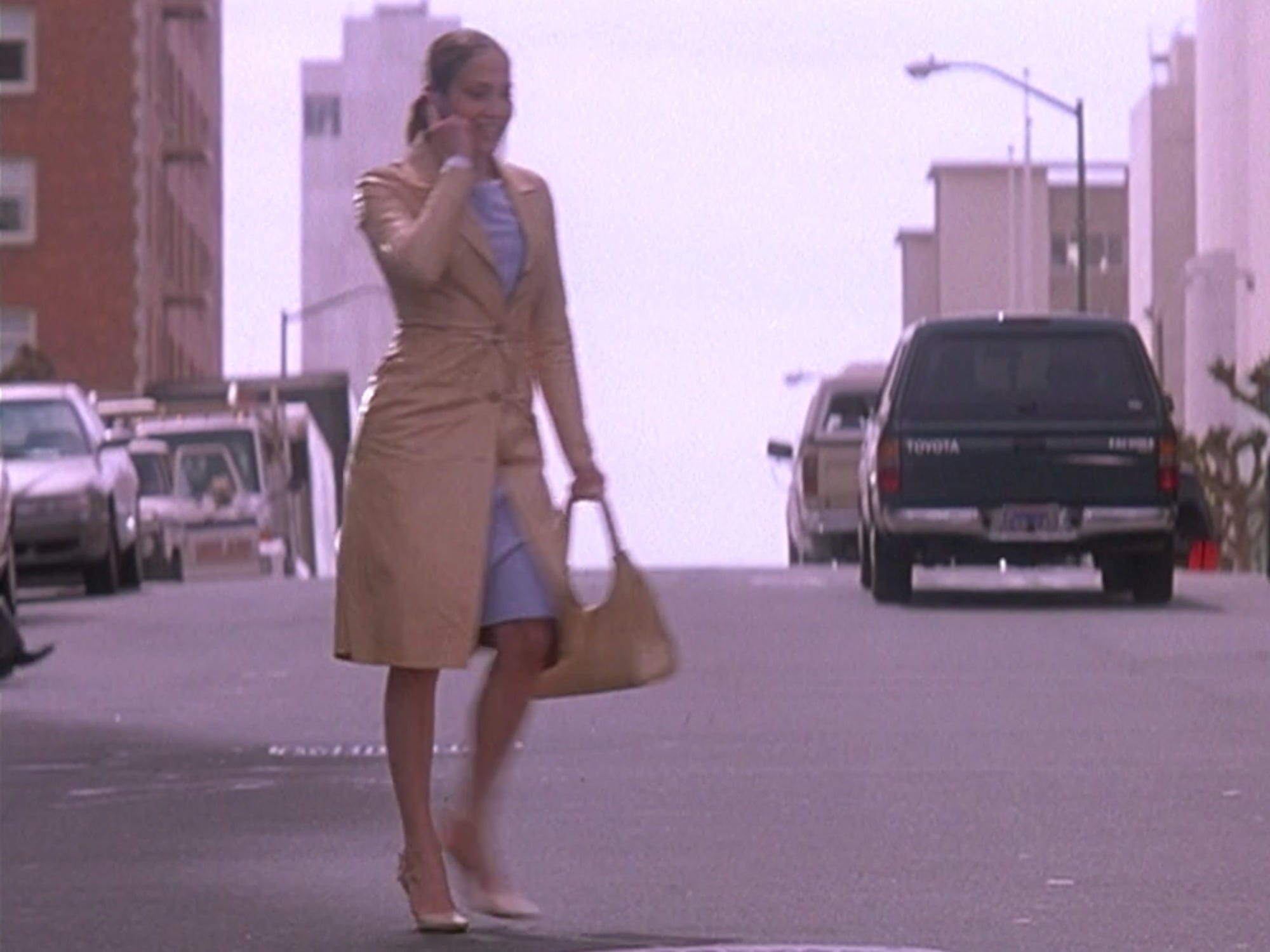 According to Cinema Review, costume designer Pamela Withers wanted to give Lopez’s character, Mary, a “classic beautiful look” in “The Wedding Planner.”

“[Director] Adam [Shankman] and I saw Mary’s style as very sophisticated, conservative and timeless, like such everlasting icons as Audrey Hepburn, Grace Kelly or Jacqueline Kennedy. Mary also seemed like a woman who saved her money and invested it in a few good designer pieces,” she said.

For that amazing meet-cute scene, Withers took colour and style into account.

“For instance, in the scene where Mary and Steve meet and he rescues her, she’s in bright blue and tan, and he’s in navy and chocolate, so they compliment [sic] each other,” she said. 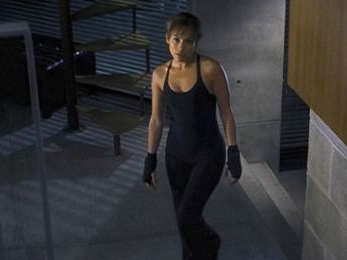 Lopez has definitely played her fair share of movie heroines over the years, but her turn as Slim, a woman who vows to get revenge on her abusive husband once and for all, certainly takes the cake.

Lopez ditched her signature glam aesthetic and donned a short, blunt-cut wig for much of the film.

In the final scene of “Enough,” she shows that she means business as she prepares to fight back, wearing a tight black tank top, black pants, combat boots, and black hand coverings. 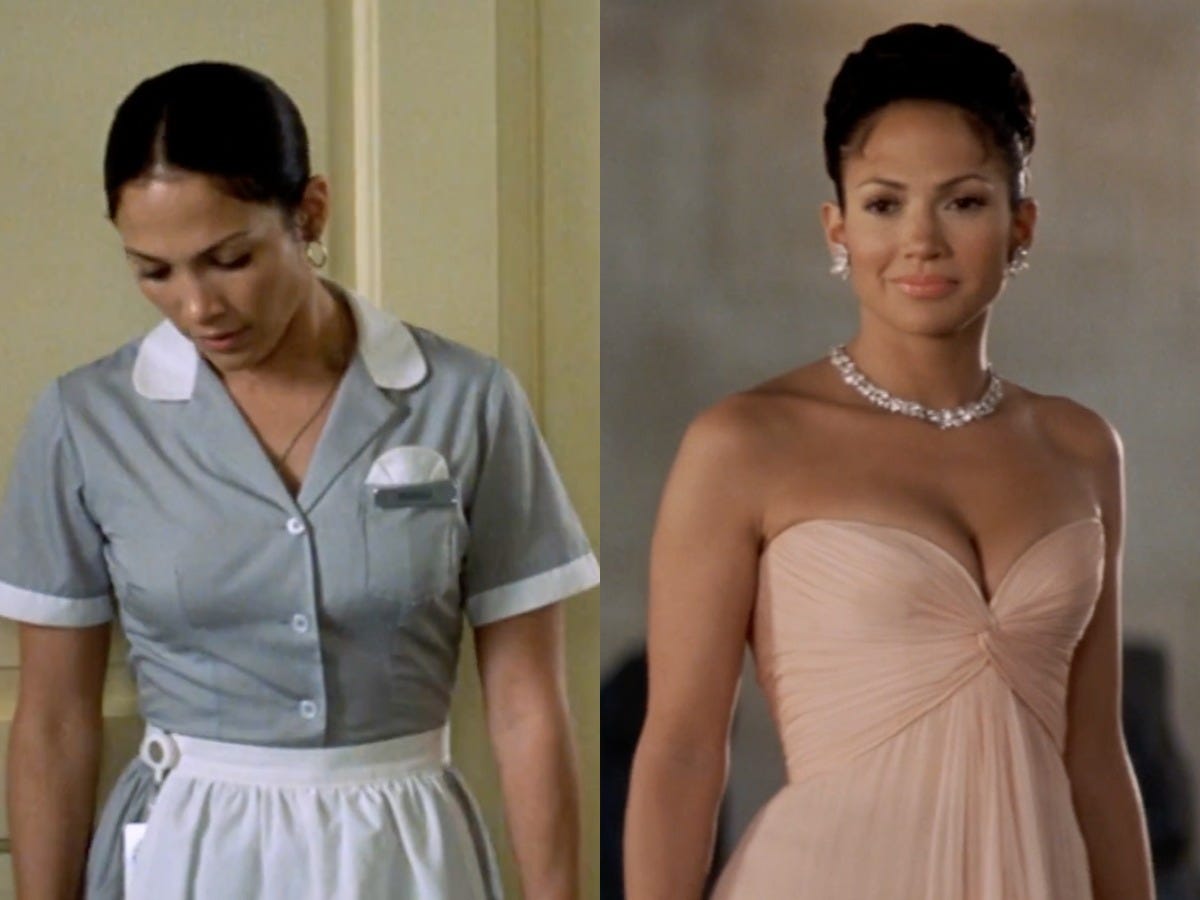 Lopez brought tons of heart to her role as a single mum and hotel housekeeper who falls in love with a high-profile politician.

Costume designer Albert Wolsky told CNN in 2002 that he had plenty of input from Lopez herself while creating the looks for the movie.

“She knows what she likes, especially things that are closely fitted to the body. Nothing loose and drapey,” he said.

At the end of the movie, Lopez’s character has her “Cinderella” moment in a vintage, pink chiffon gown by Bob Mackie – which was paired with an elegant updo and plenty of Harry Winston diamonds.

“Gigli” (2003) was slammed by critics, but Lopez’s brown leather jacket was very on-trend. 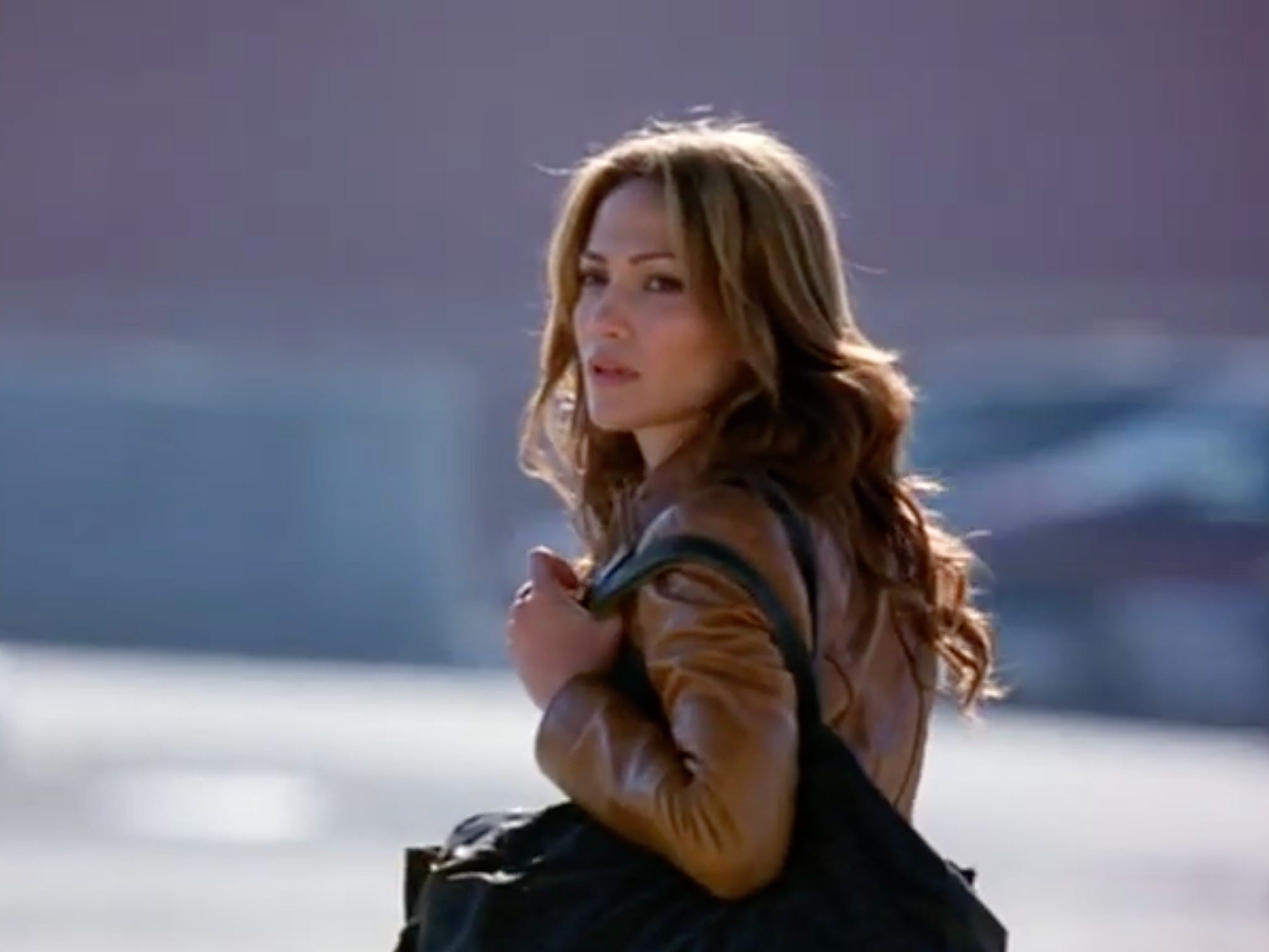 “Gigli” was largely panned by critics, but it gave us an iconic Lopez look.

The fashion largely evokes standard styles of the early 2000s, and we’ve gotta give props to her character’s amazing brown leather jacket, which she pairs with a few outfits throughout the film.

With so much nostalgia for 1990s and 2000s fashion these days, we wouldn’t be surprised to see any of her looks from the movie come back in style.

Lopez’s bold, yellow dress was one of many fantastic costumes in “Shall We Dance” (2004). 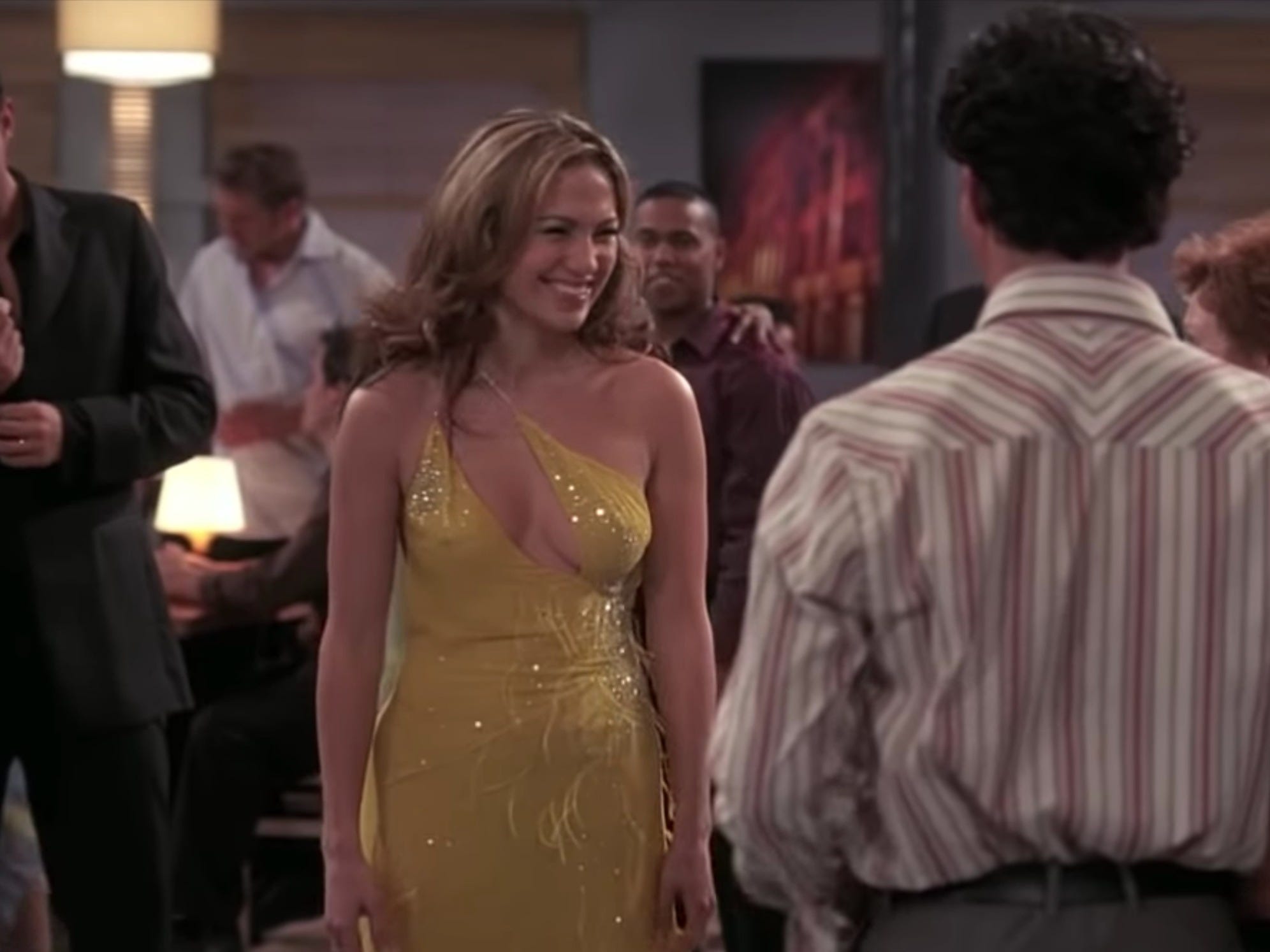 Miramax FilmsJennifer Lopez starred in ‘Shall We Dance.’

“Shall We Dance” is about ballroom dancing, so it’s no surprise that the movie is filled with stunning gowns and costumes.

At one point in the film, Lopez’s character wears a sparkly, yellow gown with a dramatic neckline.

It’s the perfect look to capture the attention of the room, and it looked even more glamorous while she was dancing.

Her wedding dress in “Monster-in-Law” (2005) was breathtaking. 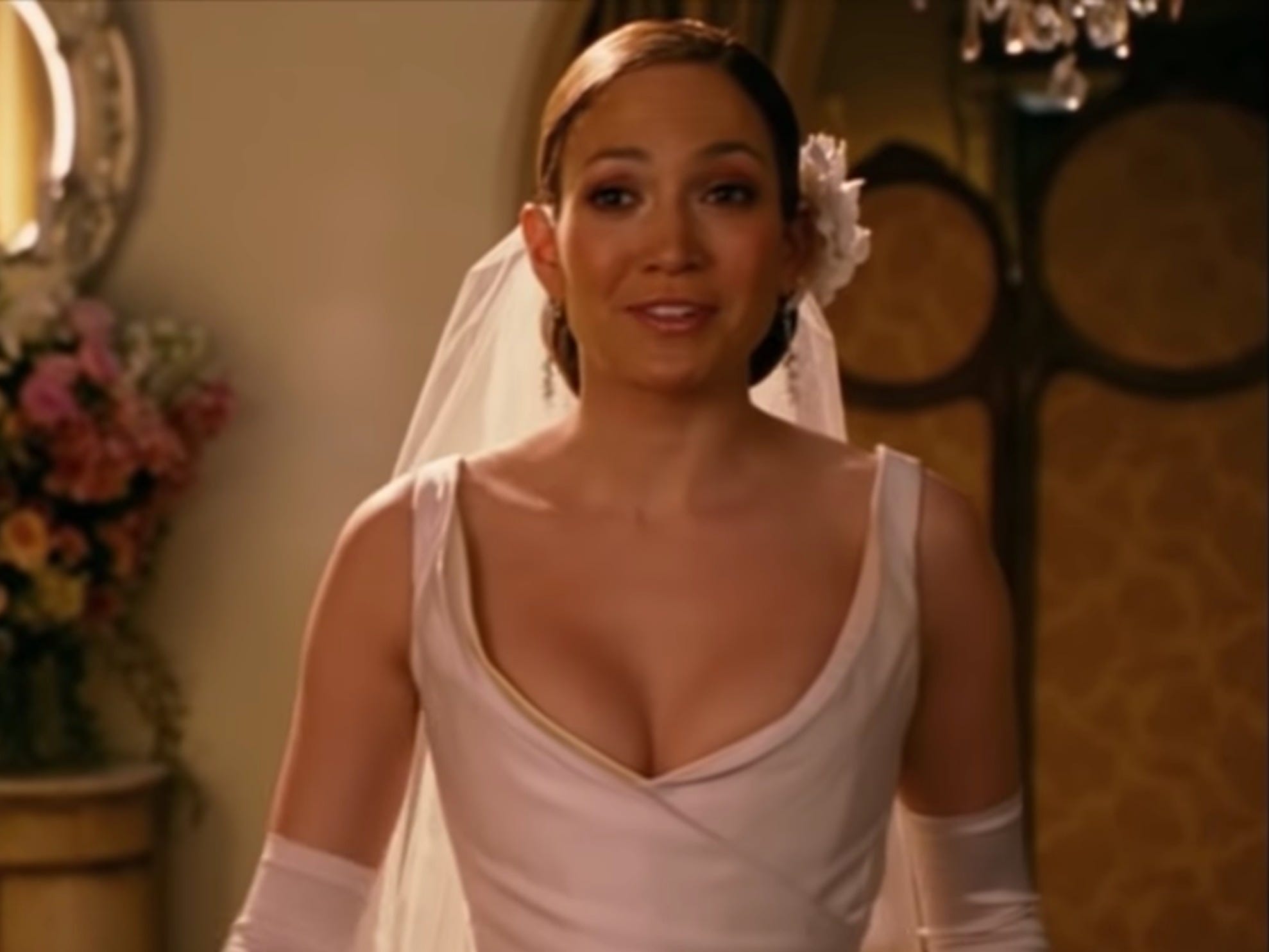 Lopez’s character Charlie has fashion ambitions in the film, so it’s no surprise that she rocked a stunning gown. 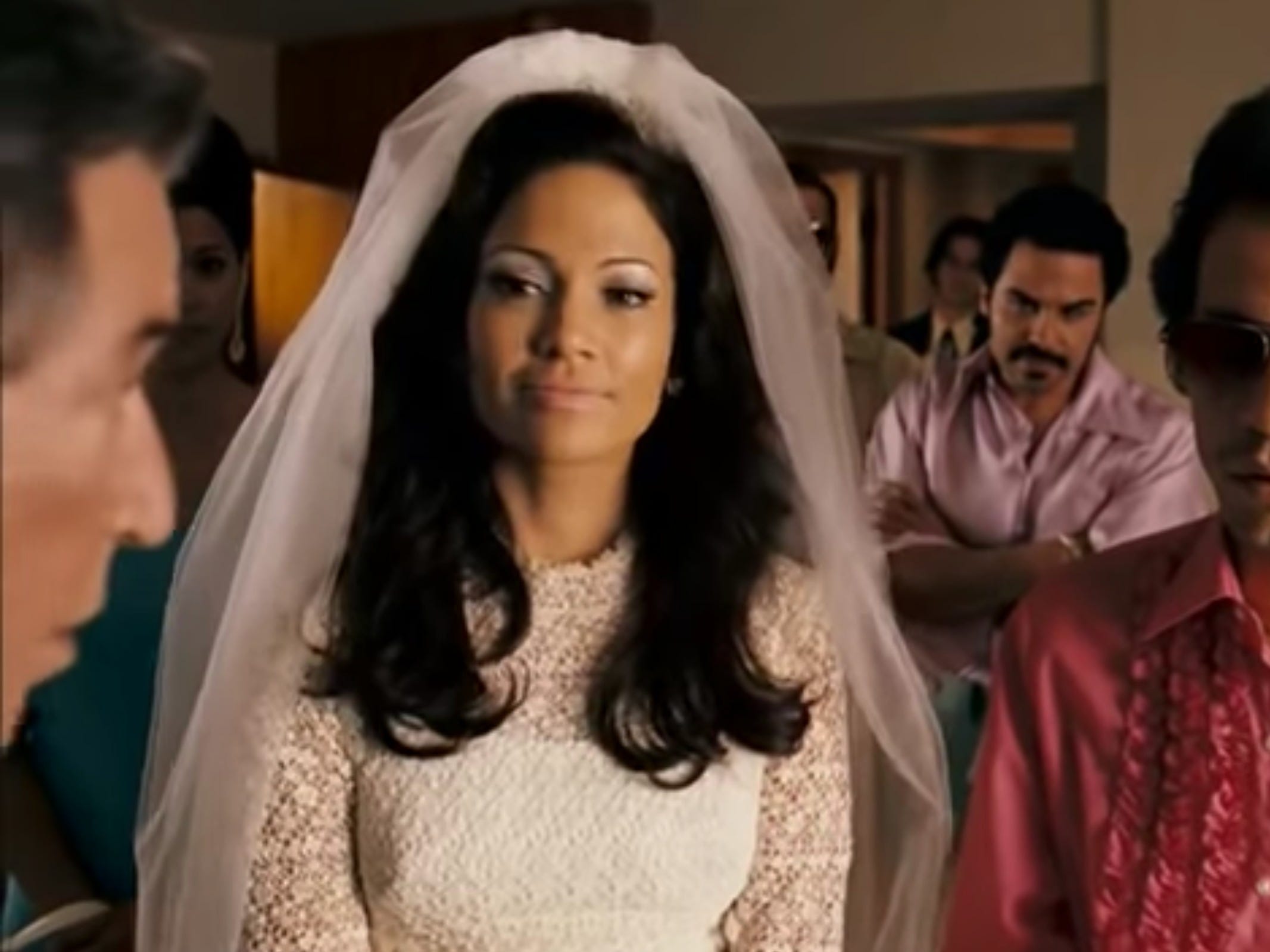 The delicate, white lace paired with the voluminous veil was eye-catching, and Lopez’s perfectly blown-out hair and iridescent eye makeup made the look stand out even more. 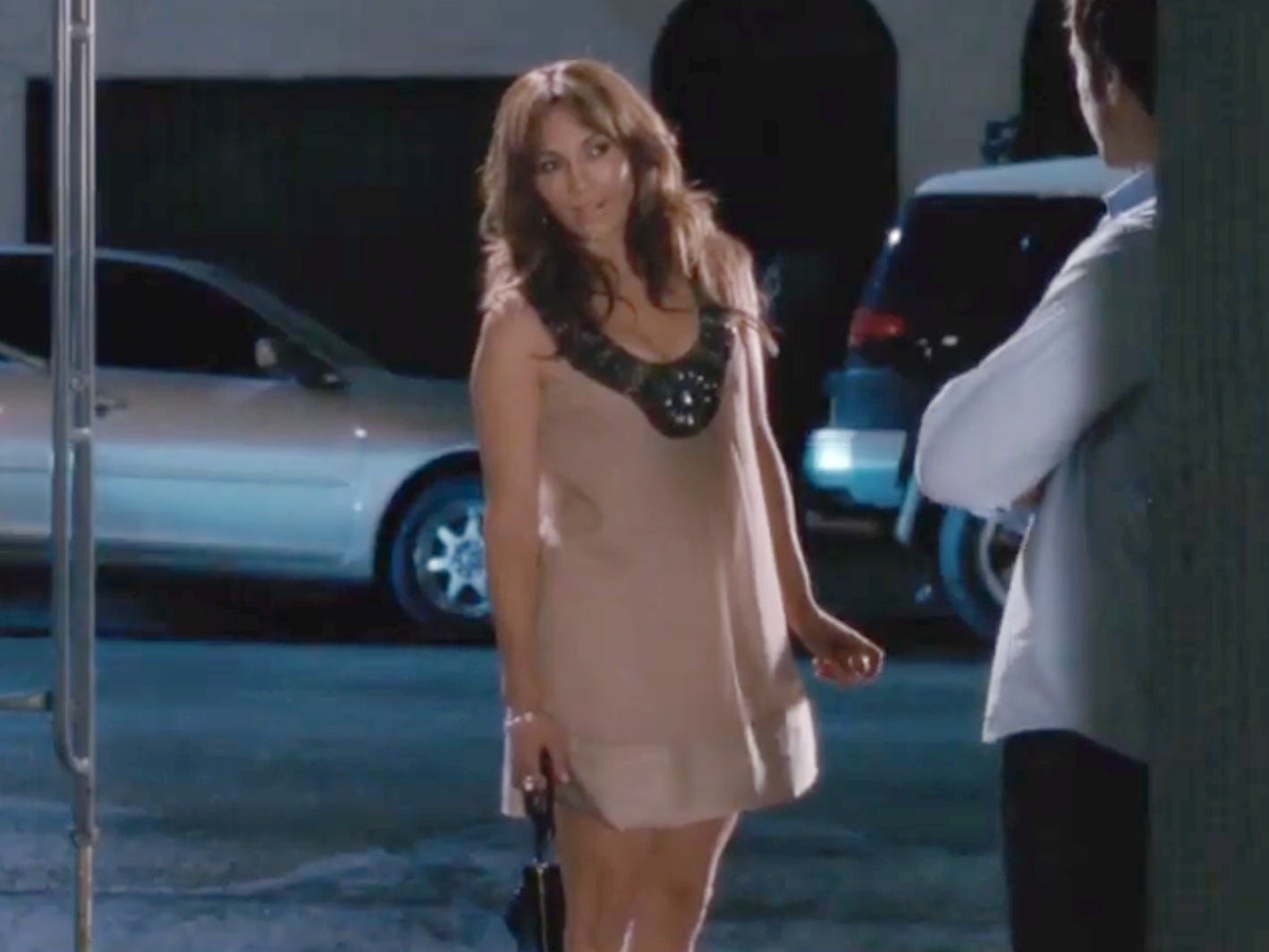 Off-screen, Lopez was a trendsetter of the 2000s, and a lot of her best movie looks also played into that style.

“The Back-up Plan” came out in 2010, and it included quite a few trends from the 2000s and 2010s, including this embellished shift dress.

In the film, the elegant dress was paired with simple heels and a black bag.

Lopez had a more casual look in “What to Expect When You’re Expecting” (2012), but her olive-green halter dress was chic. 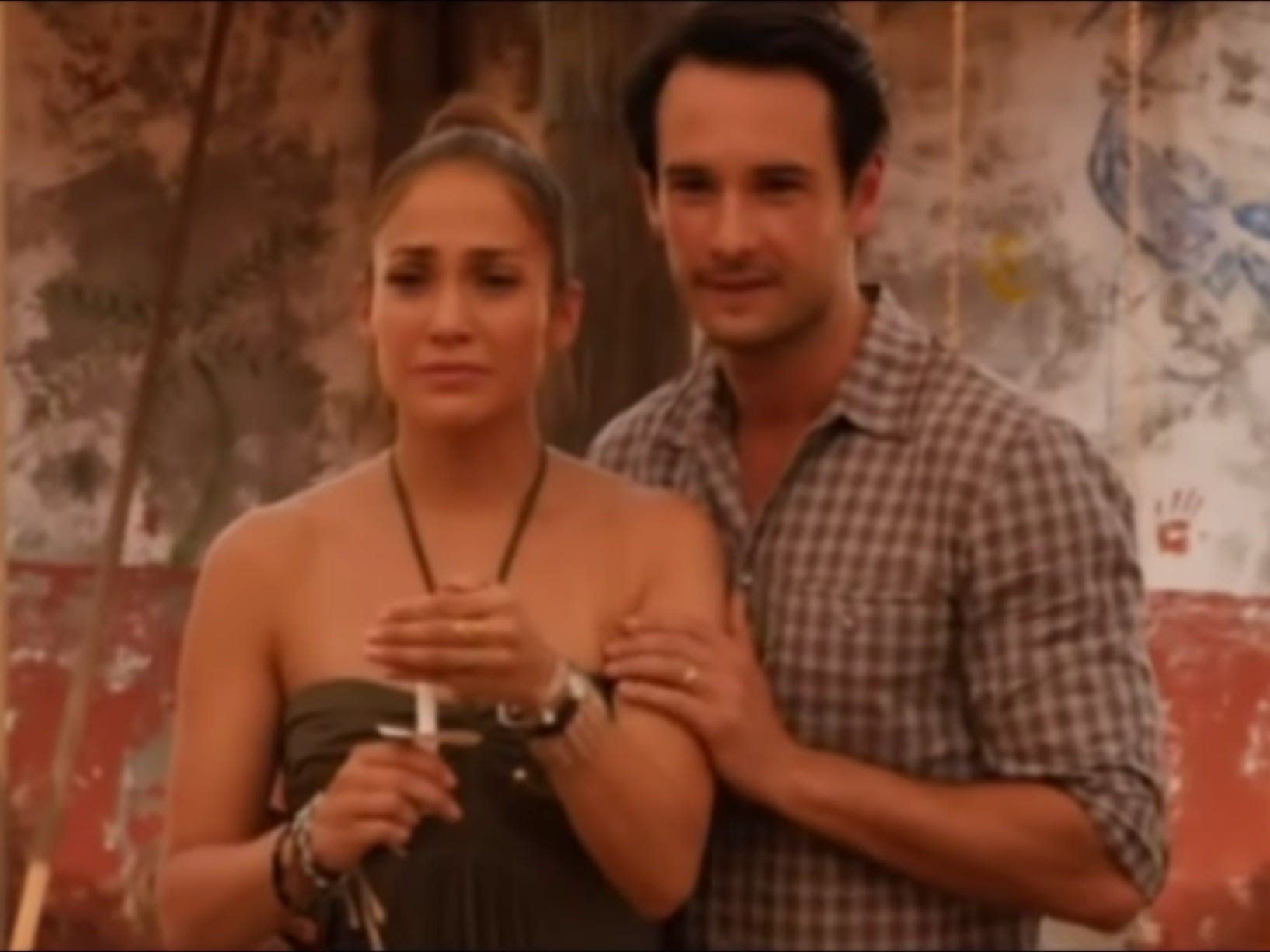 Lionsgate FilmsJennifer Lopez and Rodrigo Santoro in ‘What to Expect When You’re Expecting.’

All of the expecting mothers in “What to Expect When You’re Expecting” have different styles, from professional athleisure to perfectly tailored day dresses.

Lopez generally wore comfortable and casual outfits throughout the film, but during the adoption ceremony for her child, she wore a stunning olive-green maxi dress that was perfect for the occasion.

She finished off the look with a sleek updo and a wrist full of bracelets.

Lopez rocked plenty of bold looks in “Hustlers” (2019), but her giant fur coat was iconic. 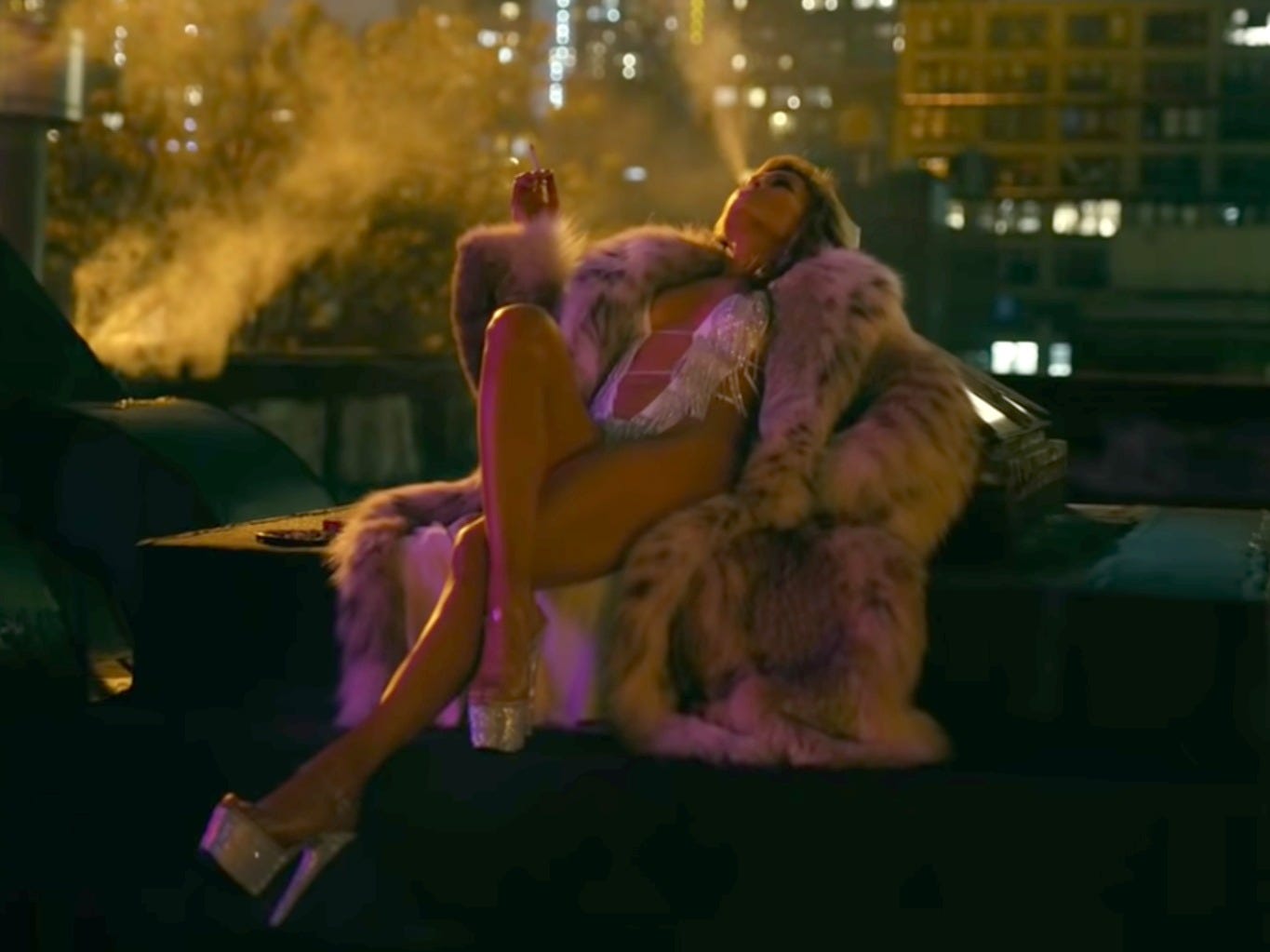 Lopez played a successful stripper named Ramona in “Hustlers,” which takes place in the late 2000s.

The film’s costume designer Mitchell Travers told Paper magazine in 2019 that Lopez herself inspired many of the film’s styles.

“The way that she sets trends now is the same way she was setting trends at the time when this movie was set in. We had a lot of conversations, like, ‘Can we reference Jen, if it’s Jen?’ I think not to do that would be to deny the impact she has had, so we just leaned into it,” he said.

Although Lopez rocks a lot of different looks both on and off the stage in the film, none of them are quite as bold or iconic as her huge fur coat.