Jennifer Garner has come a long way since her days on ABC’s “Alias” in the early 2000s.

Over the years, Garner had been steadily climbing her way to A-list status. For years, she’s starred in movies and shows that proved her flexibility as an actress, from roles in comedies to those in dramas. She’s also a Golden Globe winner, mother of three, activist, and a viral meme.

Keep reading to learn all about her life and career thus far, from her childhood in West Virginia to her stardom in Hollywood.

Jennifer Garner was born in Houston, Texas on April 17, 1972. She grew up in Charleston, West Virginia. 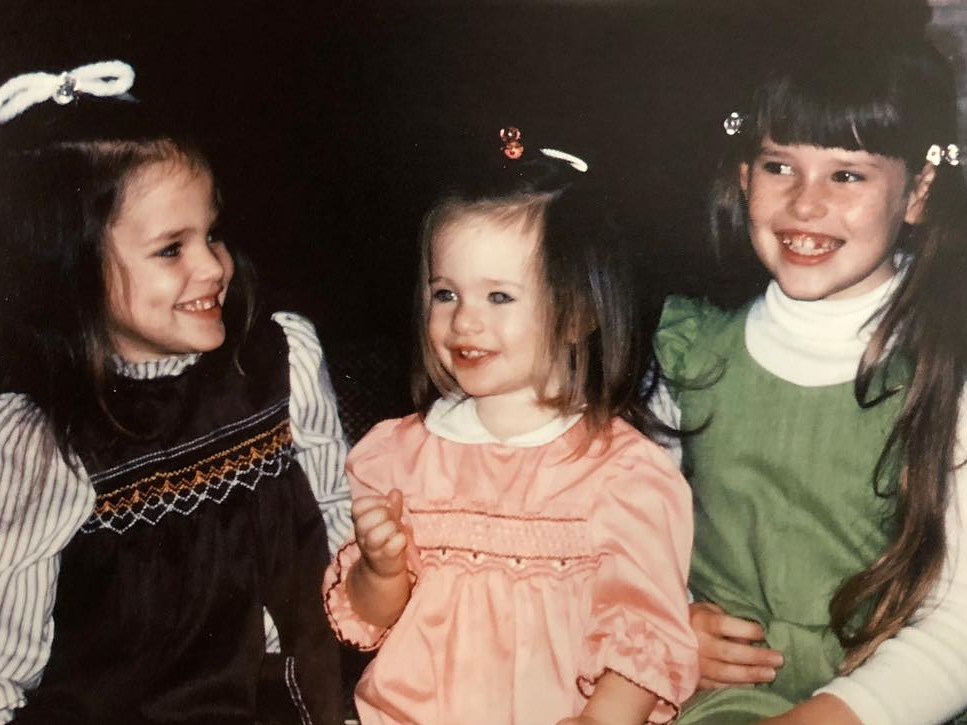 Jennifer Garner/InstagramShe moved to West Virginia when she was three years old, and is proud of her hometown.

Garner is one of three daughters (she’s the middle child) and credits her demeanour to her upbringing.

“I feel so fortunate to have grown up in a place where people look out for each other,” Garner told Southern Living in 2015. “Community is the one thing people crave most, and it’s hard to come by. I grew up with such an excess of it that now wherever I go, the first thing I do is build my group.”

Before becoming an actress, Garner’s jobs included babysitting, working at a men’s clothing store, and “building sets and cleaning toilets” at a theatre.

Garner started landing acting roles when she was a teenager. 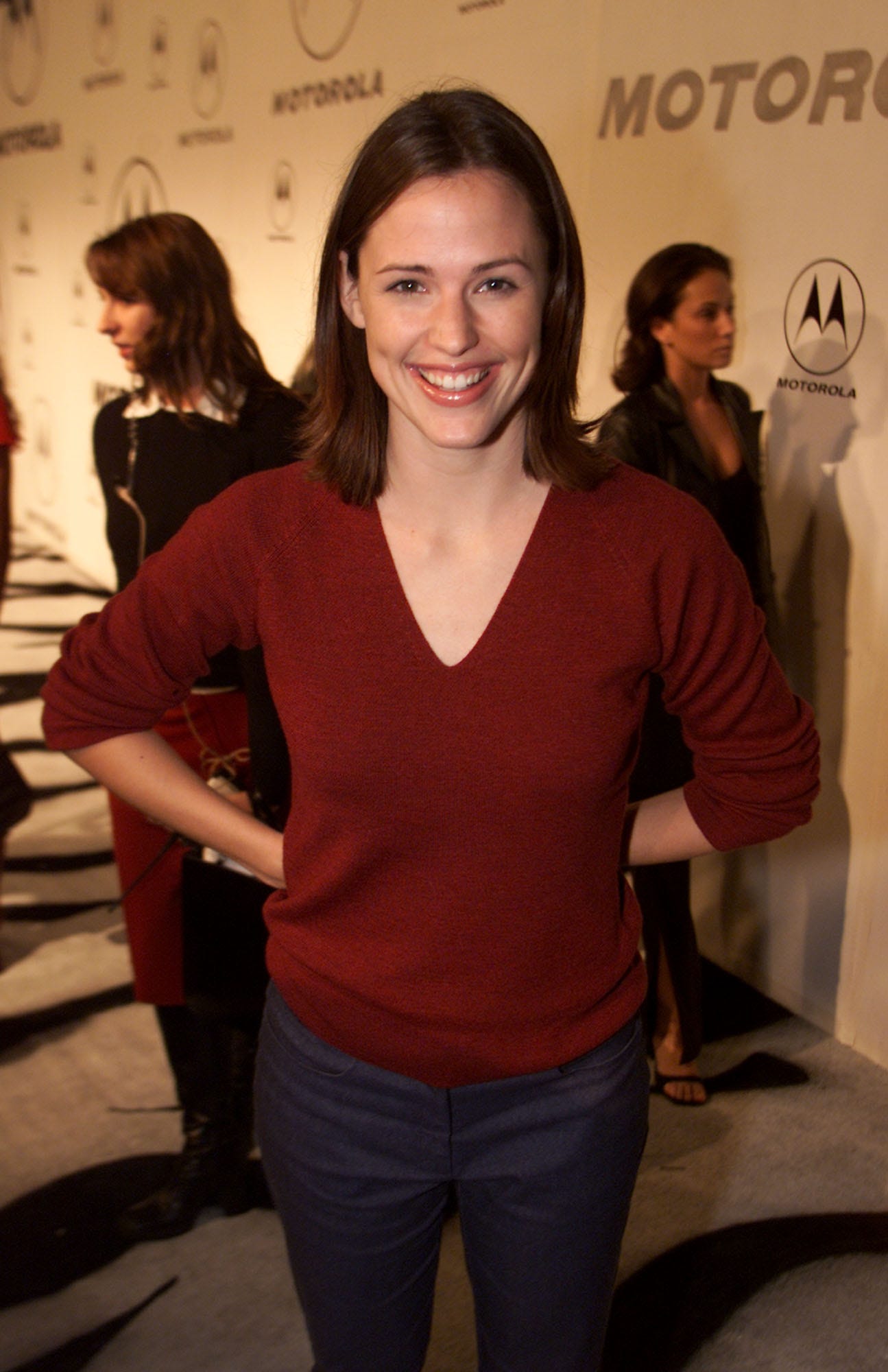 Kevin Winter/Getty ImagesGarner at the a Motorola party at in Los Angeles in December 2000.

She had roles on TV shows like “Law and Order,” “Significant Others,” and “Time of Your Life.”

In October 2000, Garner married Scott Foley, who she met on the set of the TV show “Felicity.” 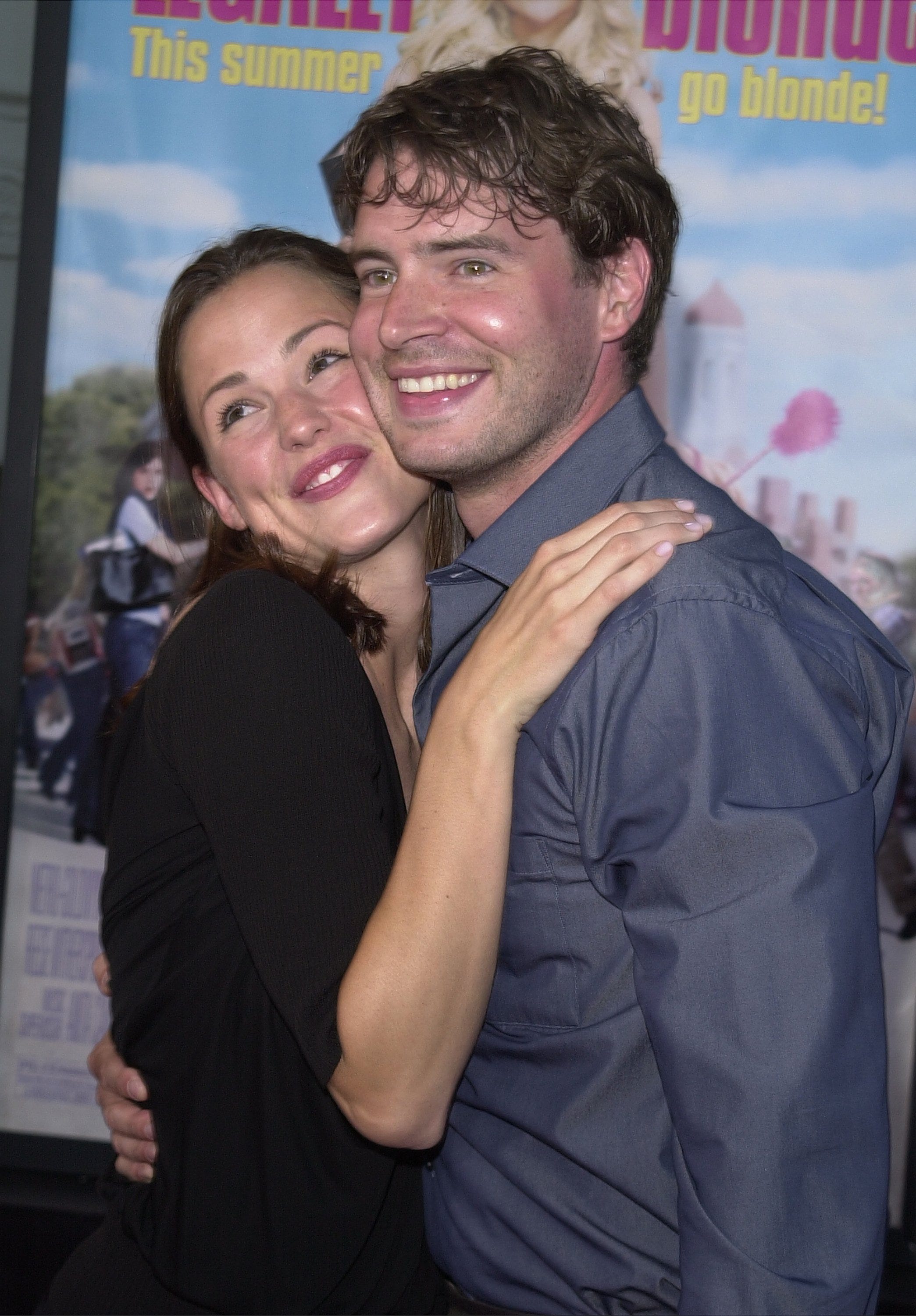 In December 2000, Garner starred in “Dude, Where’s My Car?” alongside Ashton Kutcher. 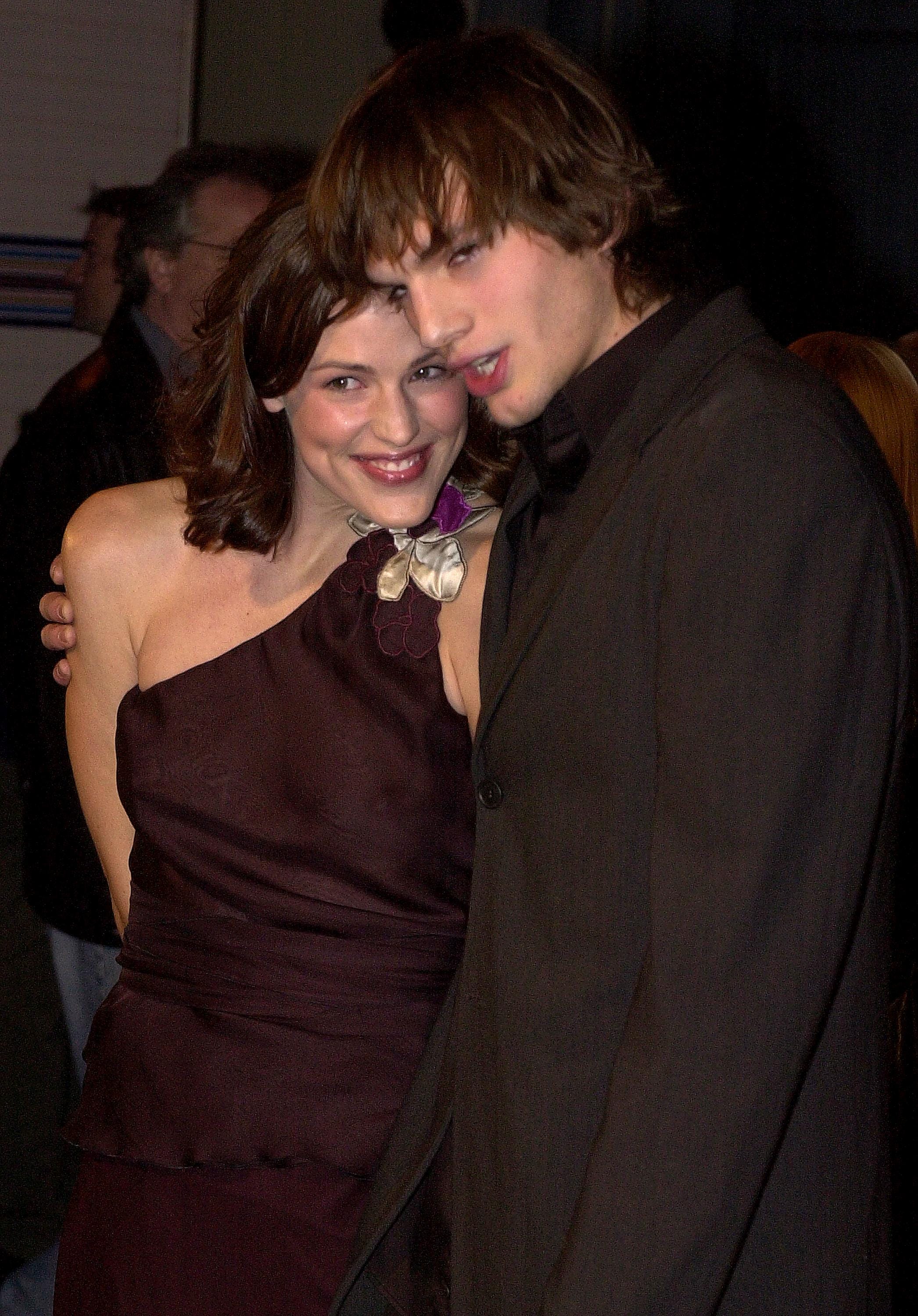 Newsmakers/Getty ImagesGarner and Kutcher posed together at the movie’s Los Angeles premiere.

She played his girlfriend, Wanda. 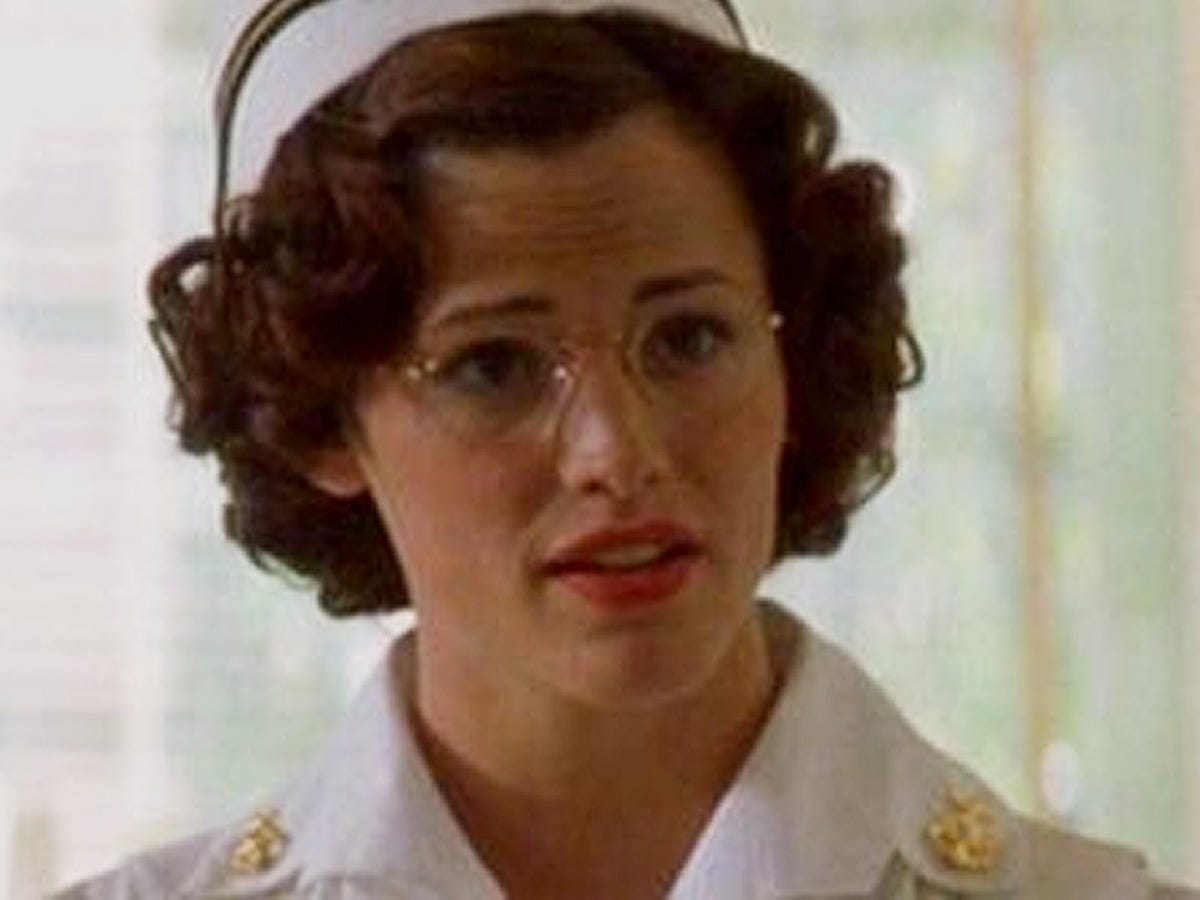 The movie was released a few months before “Alias” premiered on TV. 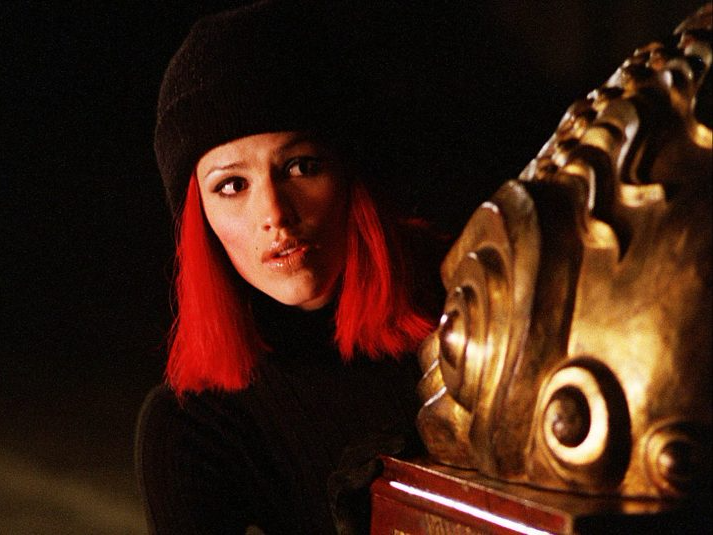 Garner starred as Sydney Bristow, the main character on the drama show. She became a secret agent for a division of the CIA after graduating college.

On January 20, 2002, Garner won her first Golden Globe for best performance by an actress in a drama television series. 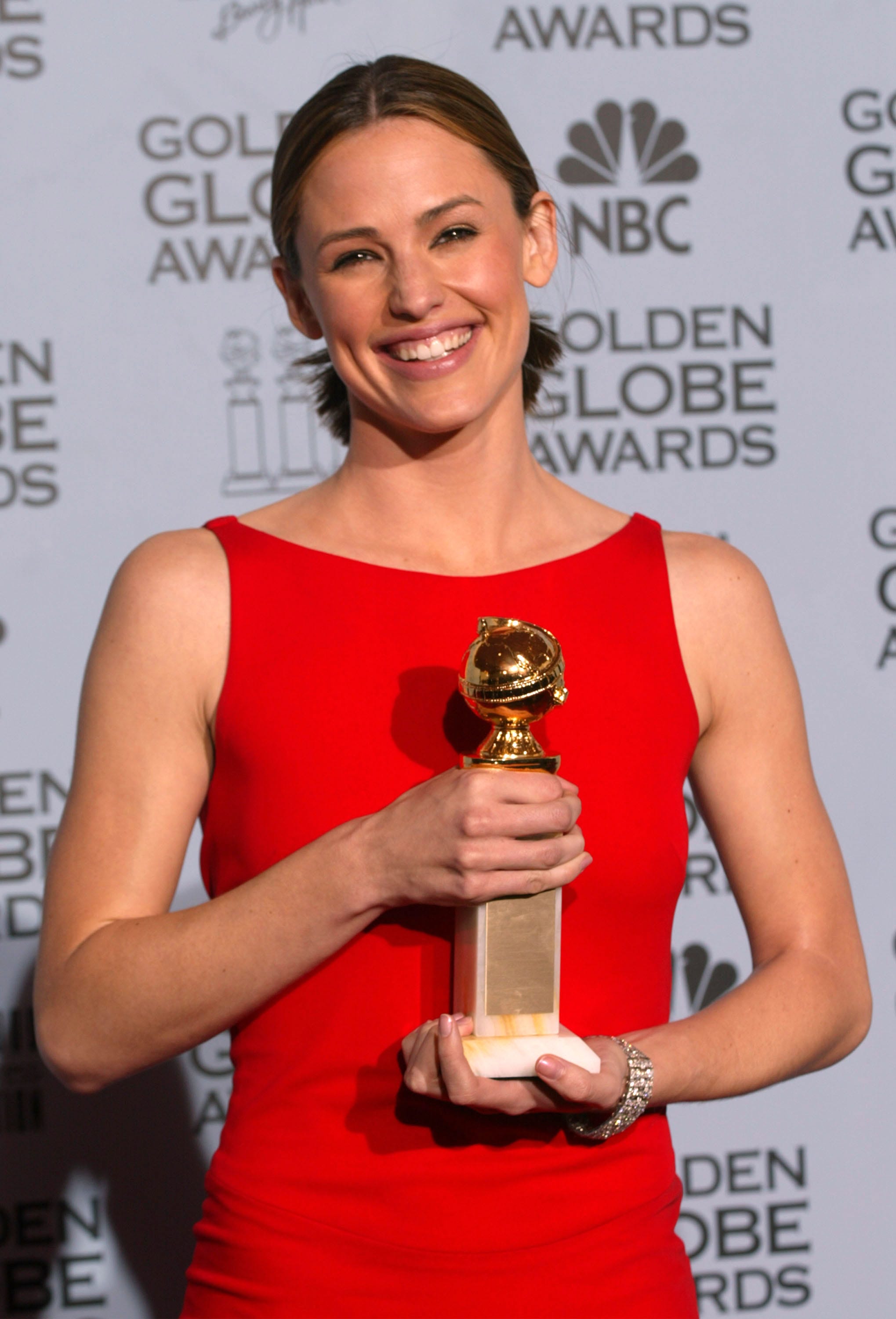 Frederick M. Brown/Getty ImagesShe posed with her award at the 59th Golden Globes at the Beverly Hilton Hotel.

Garner’s role on “Alias” earned her four total nominations and one win between 2002 and 2005.

Garner starred as Elektra Natchios in the 2003 movie “Daredevil.” 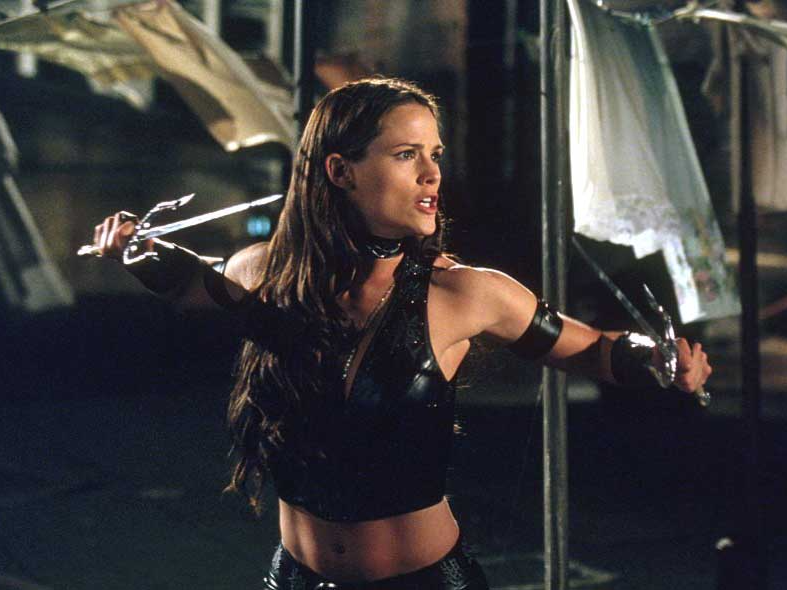 Twentieth Century FoxThis was the second film that Garner and Affleck starred in together.

Garner reunited with Affleck on the big screen as Marvel badass Elektra.

In a 2017 interview, Affleck said that sparks flew for the two stars on the set of “Daredevil.”

“We met on ‘Pearl Harbour,’ which people hate, but we fell in love on ‘Daredevil,'” he said. “By the way, she won most of the fights in the movie, which was a pretty good predictor of what would happen down the road – my wife, holding swords and beating the living s— out of me.”

Garner filed for divorce from Foley in May 2003. 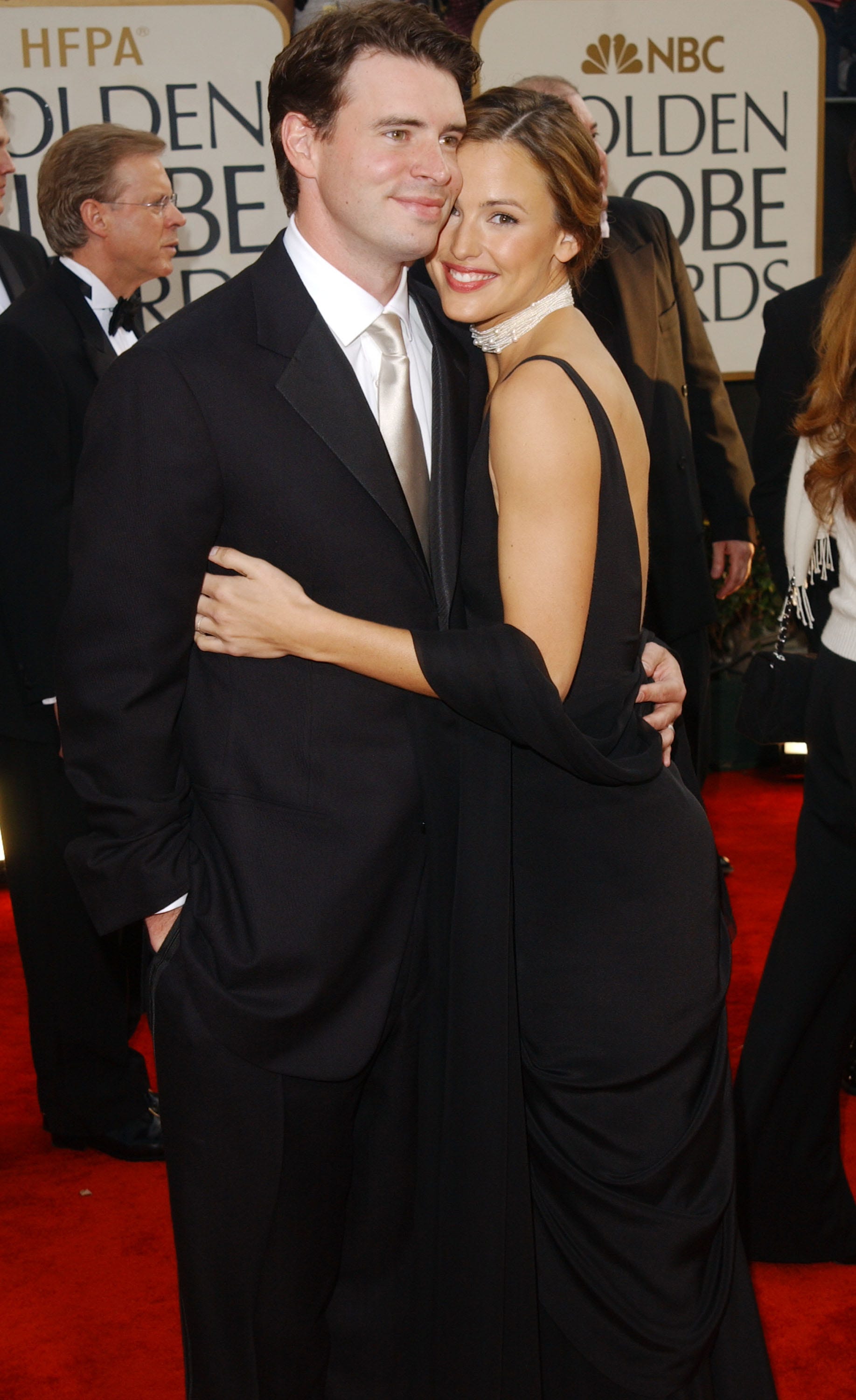 Garner said that in retrospect, their relationship wasn’t going to last long.

She added: “We didn’t have a shot. He’s a really good guy, and we just imploded.”

Foley also spoke out against speculation over what caused their divorce.

“Nobody else was involved,” he said. “Jennifer became a huge celebrity. She became a huge star, and she deserved everything she got. There was no other relationship, there was no infidelity, nothing. People get divorced, you know? Through no one’s fault and everyone’s fault.”

In June 2003, Garner received the MTV Movie Award for breakthrough female performance for her role in “Daredevil.” 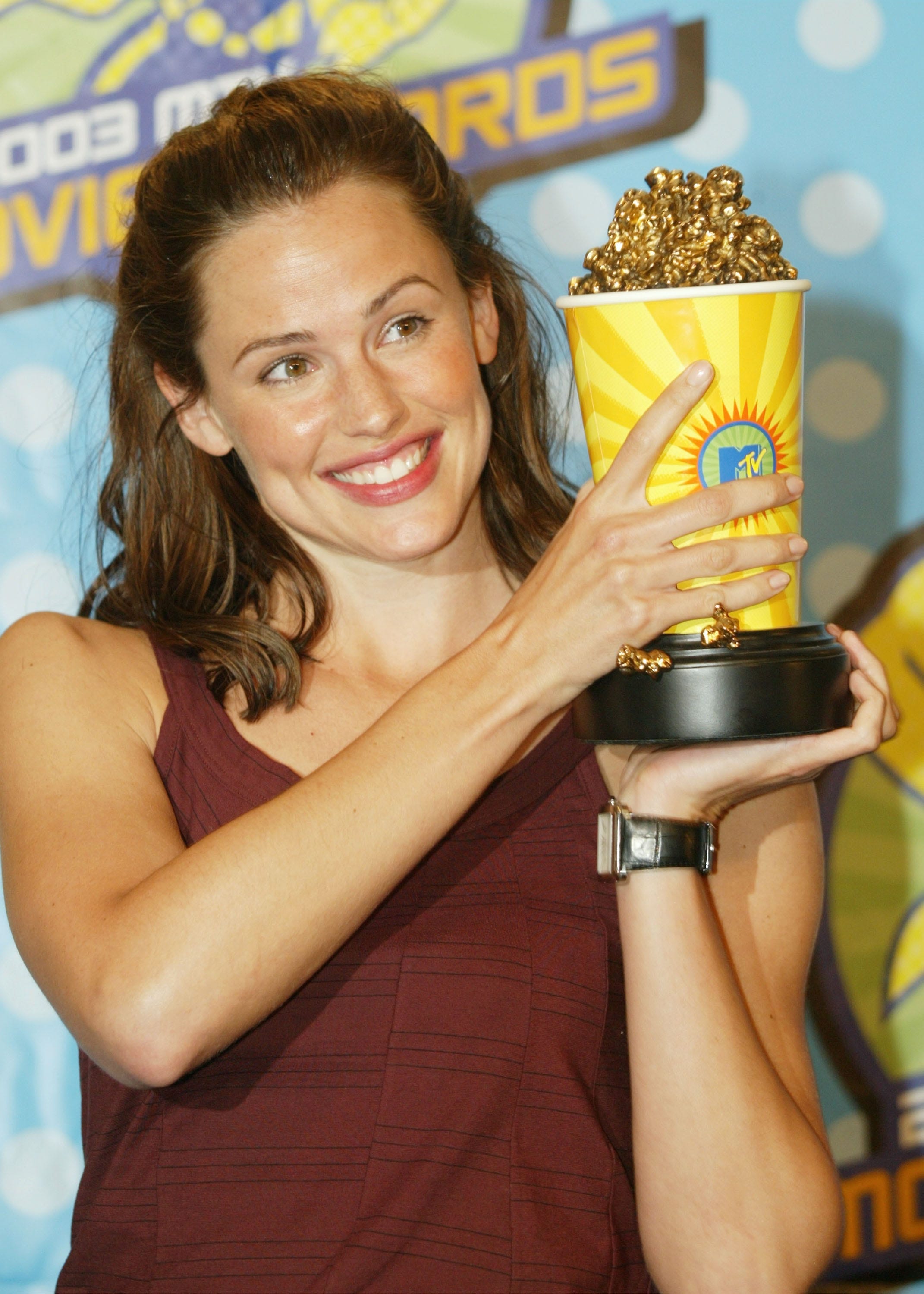 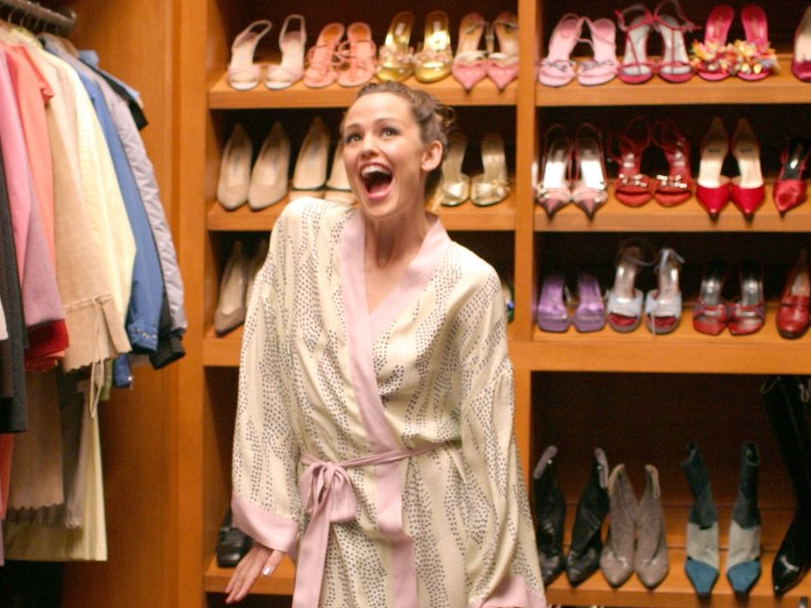 Columbia PicturesAt this point, she had become America’s sweetheart.

Garner played a 13-year-old girl who felt completely embarrassed after her birthday and wished she could fast forward to being 30 years old. The next day, her character woke up with her wish granted and a new life. 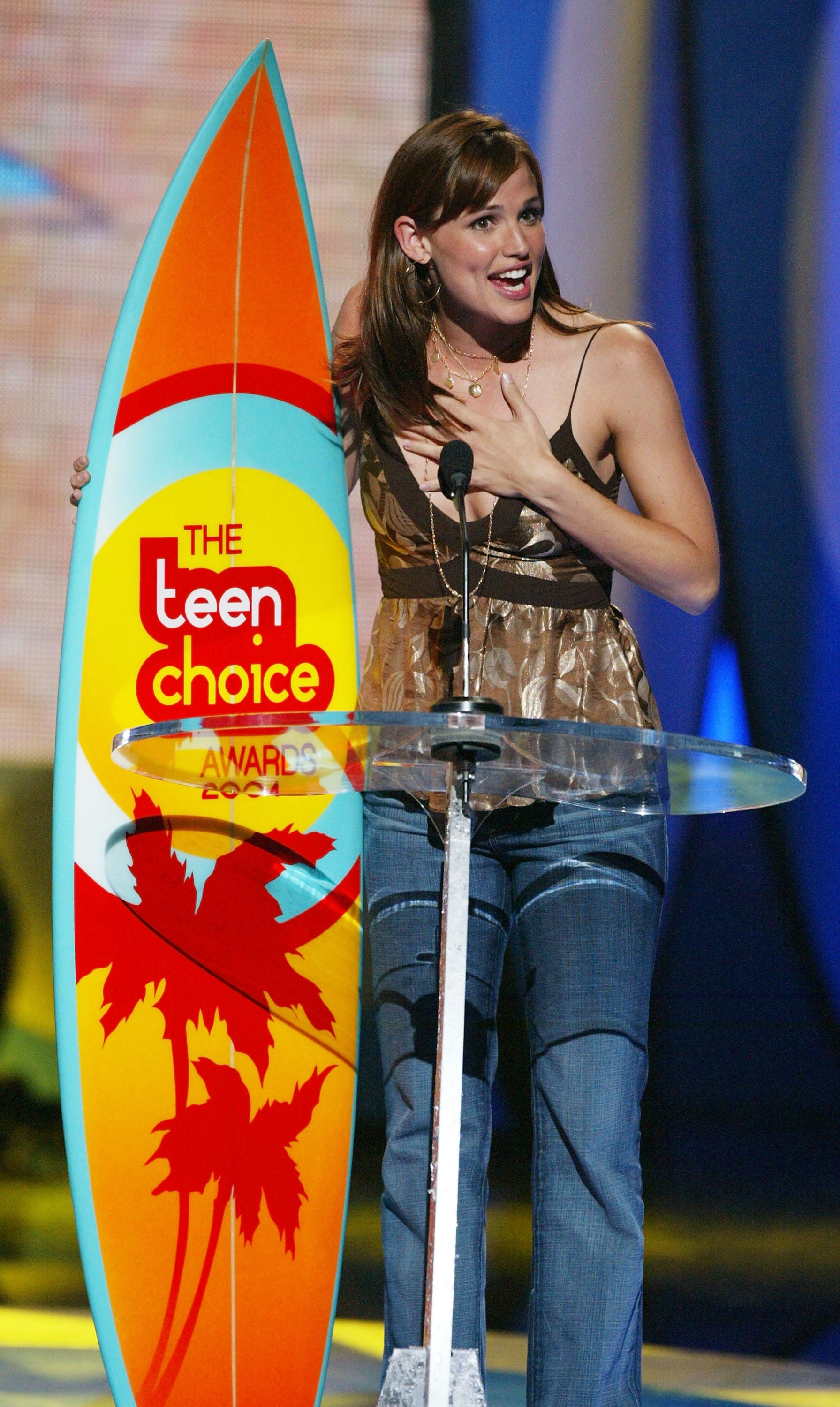 Kevin Winter/Getty ImagesShe was also nominated for five other TCAs in 2004.

Garner’s role on “Alias” earned her quite a few fans.

Garner reprised her role as Elektra for a standalone film titled “Elektra” in January 2005. 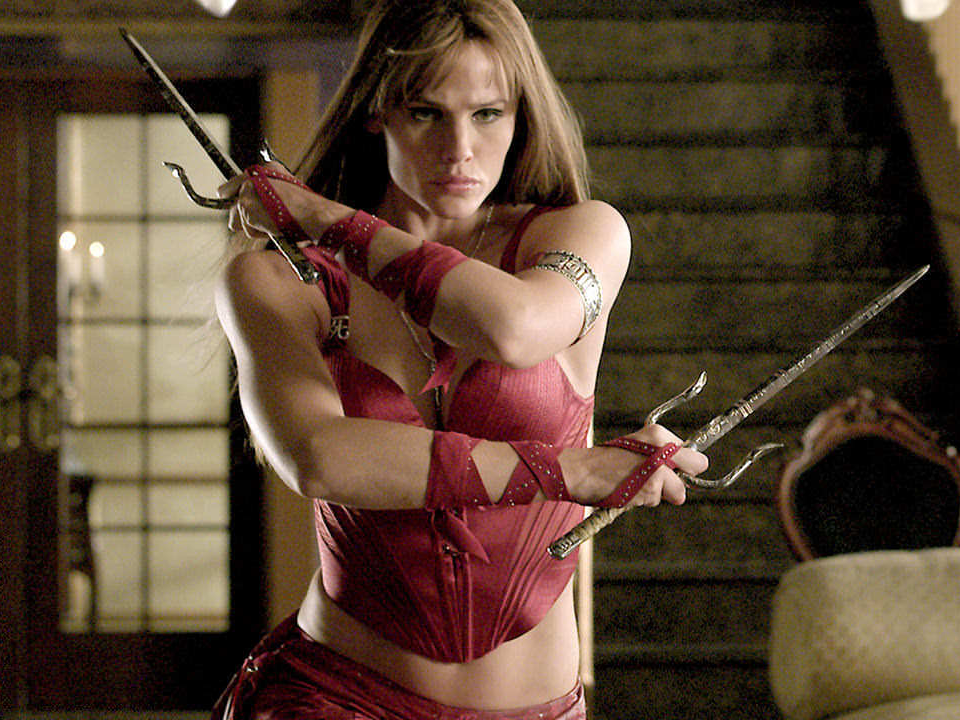 In 2005, Garner was also nominated for a Teen Choice Award for choice movie actress: action adventure/thriller.

In February 2005, she won a SAG Award for outstanding performance by a female actor in a drama series for her role on “Alias.” “We were just always amazed and grateful that we were coming back every year,” Garner said of the show. “We didn’t know if people would grab onto it at all, particularly because it asks so much of the audience. We’re proud that the people who got the show got it so much and have stuck by it through so many changes and have just gone right along with it.”

In June 2005, Garner and Affleck got married in a low-key wedding ceremony that took place in Turks and Caicos. 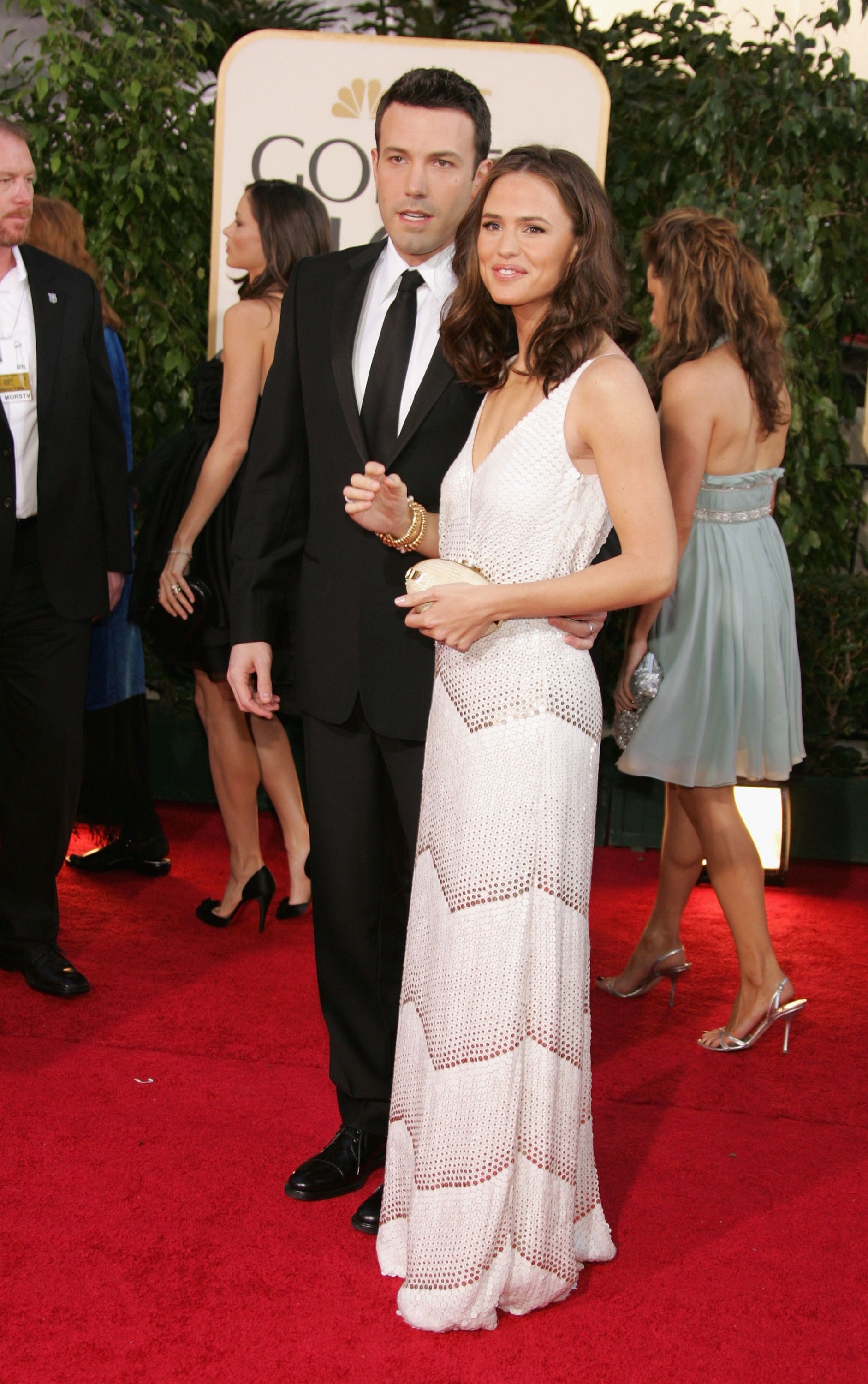 Like other celebrity couples, Affleck and Garner secretly tied the knot. A few months later, in December 2005, the couple welcomed their first child (daughter Violet). 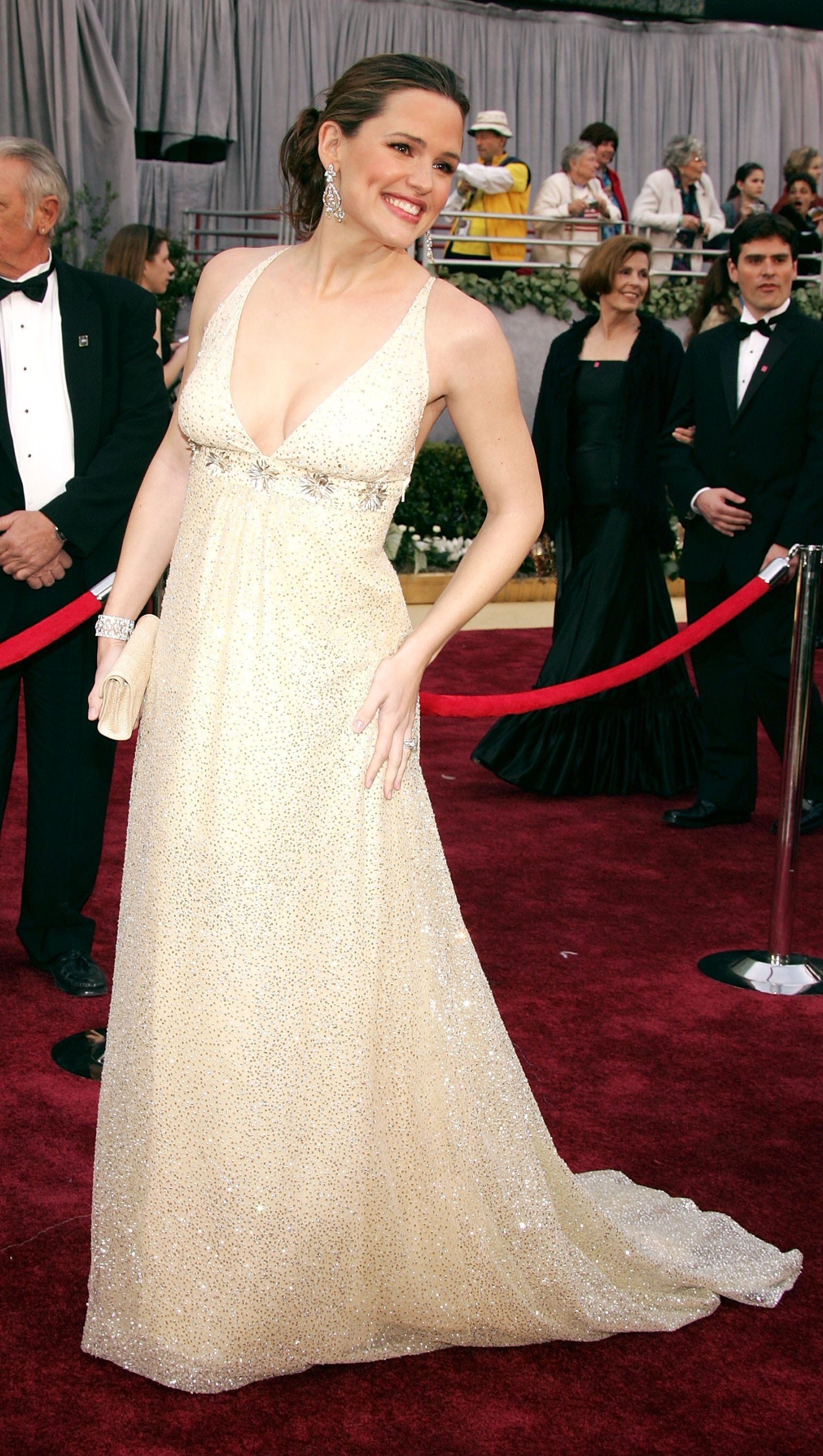 A few months later, the series finale of “Alias” aired on ABC. 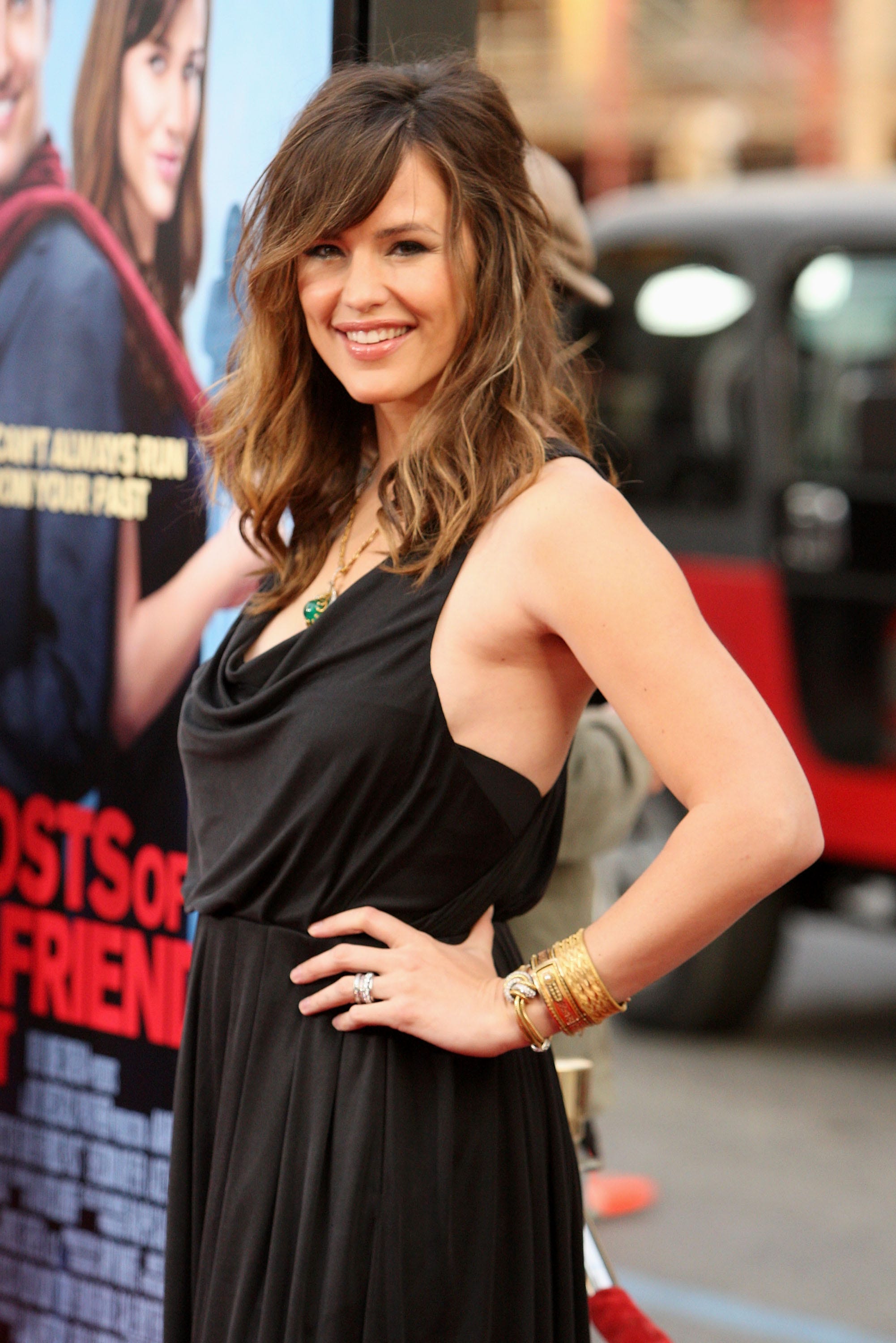 Jason Merritt/Getty ImagesGarner was radiant at the premiere of ‘Ghosts of Girlfriends Past.’

That same year, she starred in “Ghosts of Girlfriends Past” with Matthew McConaughey and “The Invention of Lying” with Ricky Gervais.

Garner reunited with Kutcher in the 2010 romantic comedy “Valentine’s Day.” They played close friends that later became a couple.

In February 2012, Garner gave birth to her third child, a son named Samuel. 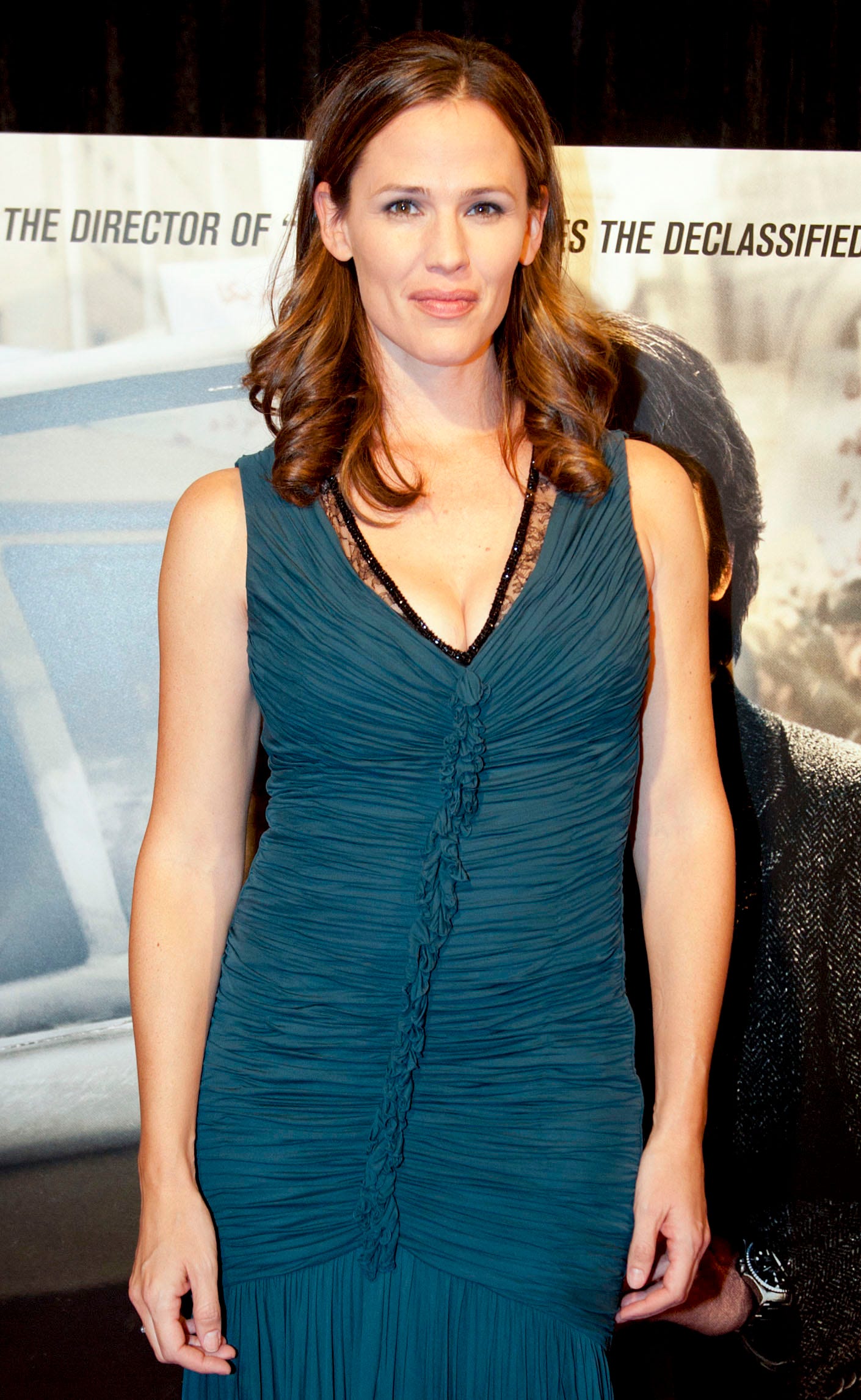 Leigh Vogel/Getty ImagesShe supported Affleck at the premiere of ‘Argo.’

Garner also gushed about Affleck in an interview.

“He knows when to swoop in with the gesture,” she said. “He’s sweet that way. Honestly, I would do anything for that man, because I know it’s not taken for granted.” 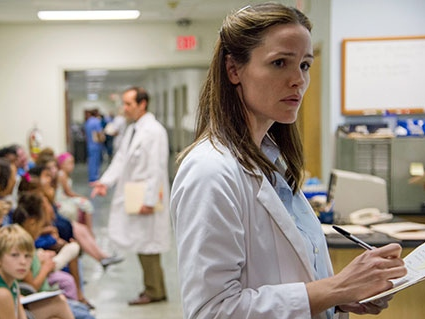 Truth EntertainmentThis was the second film Garner starred in with Matthew McConaughey.

In 2014, Garner became the spokesperson for Capital One’s Venture Card and returned to TV. 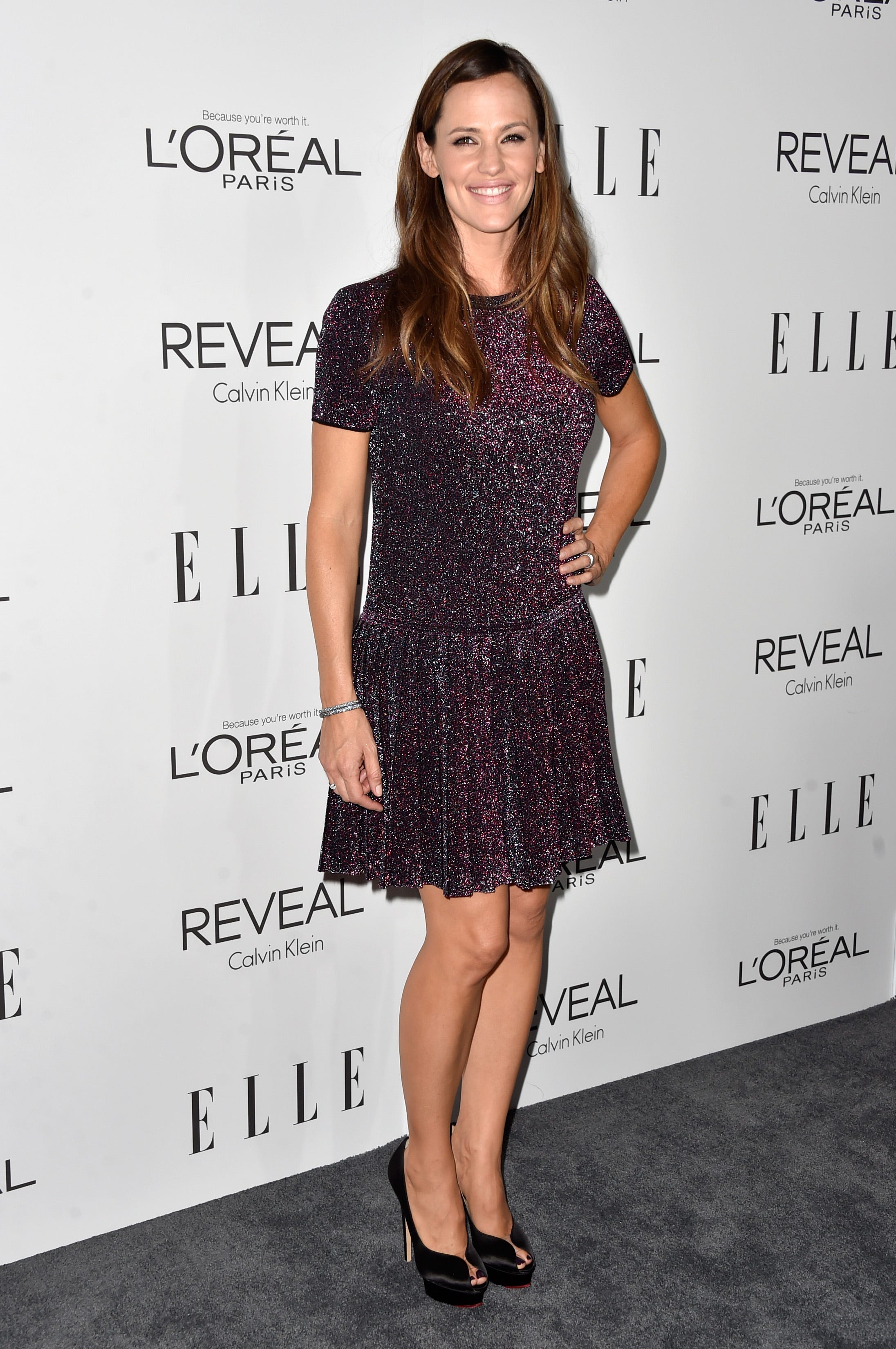 Frazer Harrison/Getty ImagesShe joined other famous faces that have supported Capital One, like Alec Baldwin and Samuel L. Jackson.

She’s starred in a series of commercials since then and her father starred in one of them with her.

In June 2015, Garner and Affleck revealed their breakup after being married for a decade. 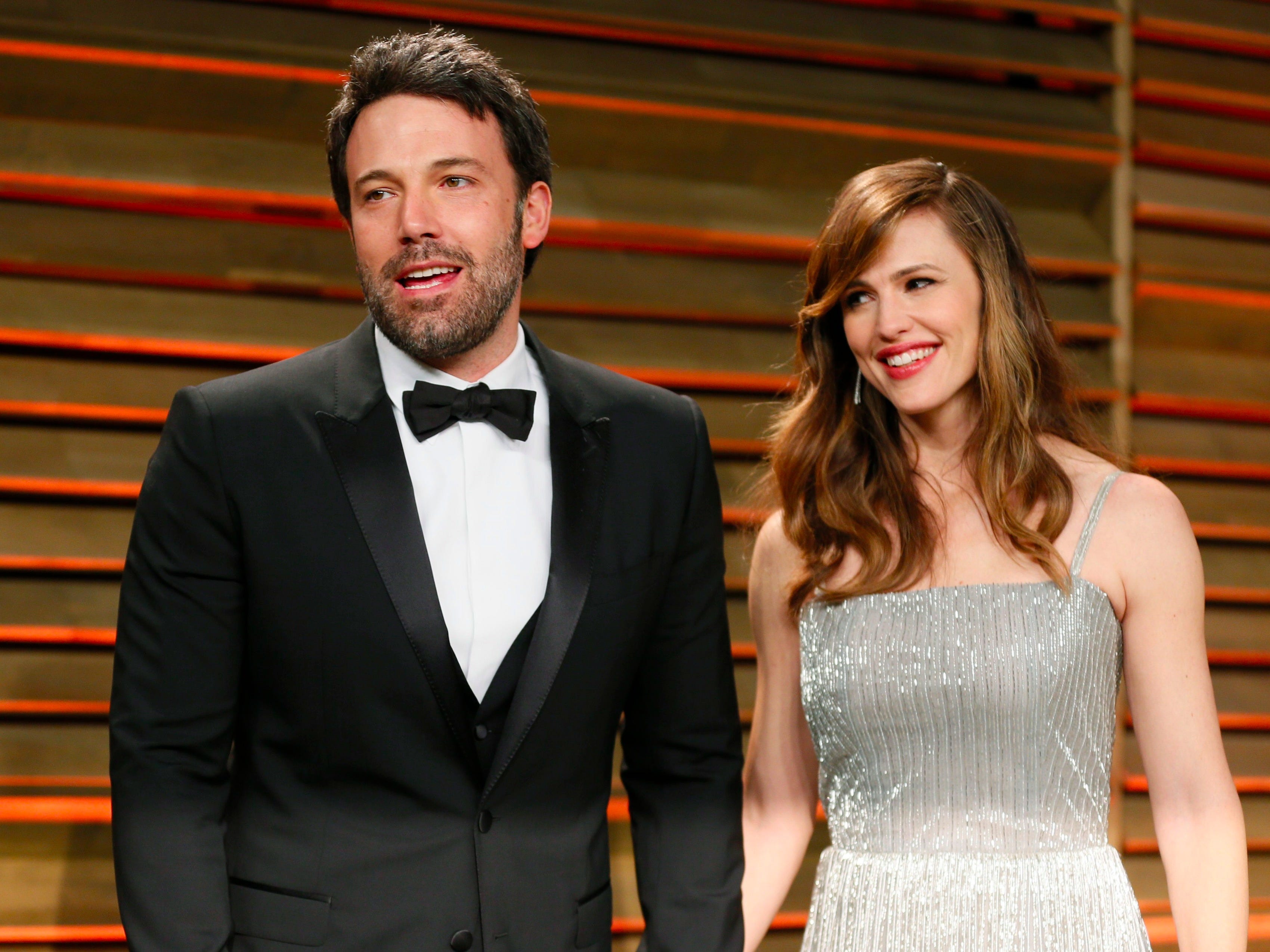 “After much thought and careful consideration, we have made the difficult decision to divorce,” their statement to People read. “We go forward with love and friendship for one another and a commitment to co-parenting our children whose privacy we ask to be respected during this difficult time.”

She was also honoured for her charitable actions at the Starkey Hearing Foundation “So the World May Hear” awards gala. Adam Bettcher/Getty Images for Starkey Hearing FoundationGarner has always been passionate about giving her time to organisations that help others.

The foundation strives to make hearing accessible for more people in America and worldwide by offering hearing aids. The Starkey Foundation also “focuses on hearing health missions, education, and recycling, as well as grants to mission-aligned organisations.”

At the 2016 Teen Choice Awards, Garner and her “Miracles From Heaven” costar, Kylie Rogers, accepted the award for choice drama movie. 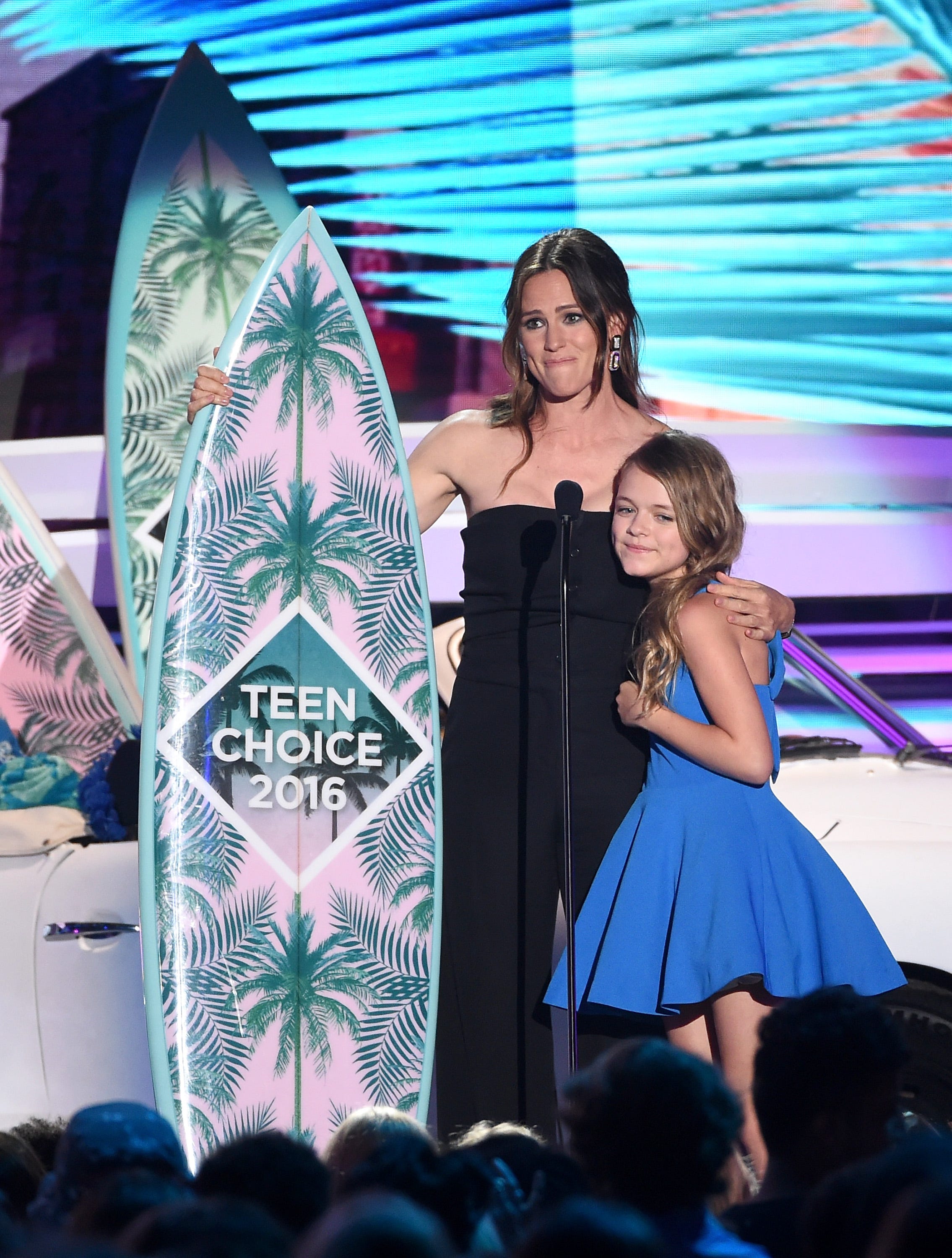 That year, Garner was also nominated for a TCA for choice drama movie actress. 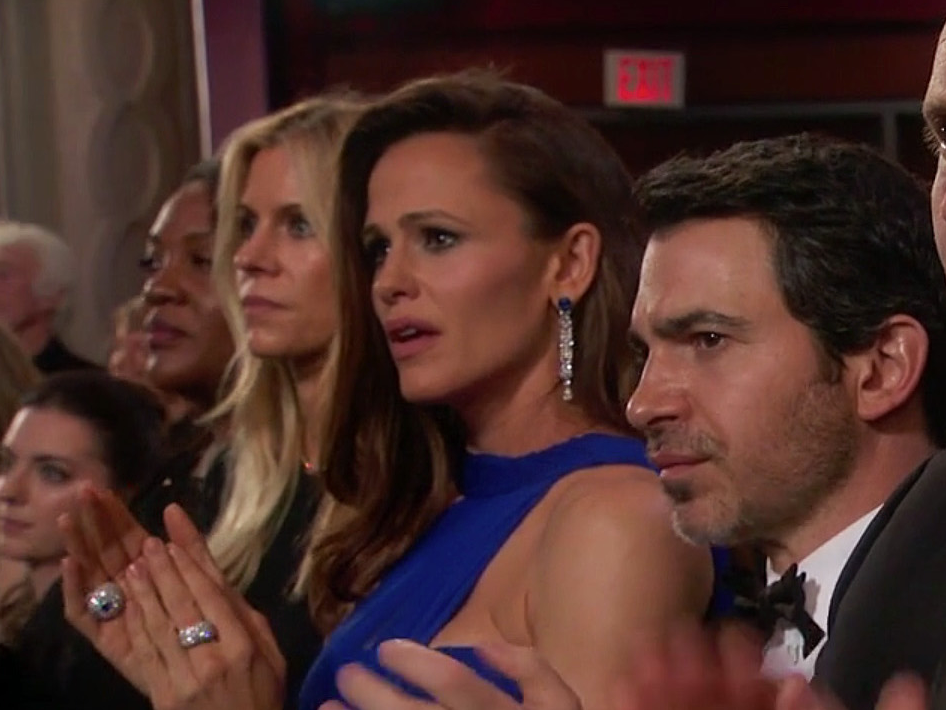 ABCPeople couldn’t get enough of it.

After pausing mid-clap and appearing deep in thought, she became an Internet sensation. She later called the moment “too embarrassing,” but that basically made fans love her even more.

In March 2018, Garner starred in “Love, Simon” alongside Nick Robinson and Josh Duhamel. 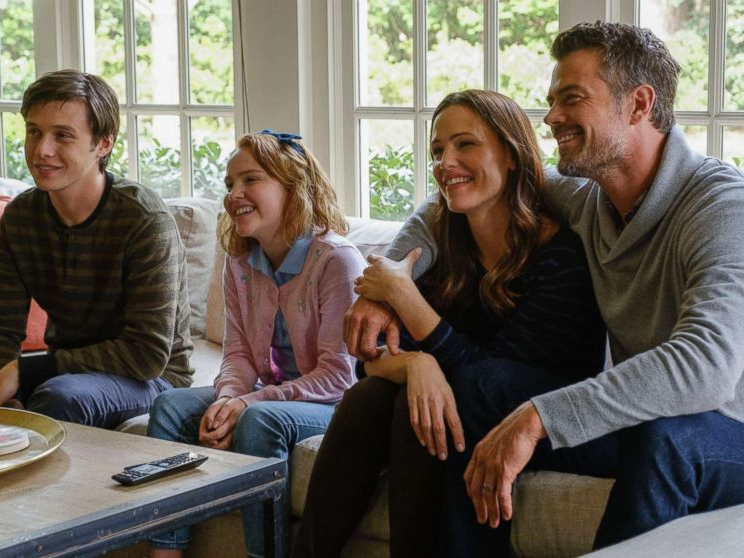 In an interview, Garner spoke about the impact of the coming-of-age film, and what she hoped that future generations could take away from it.

In the 2018 action movie “Peppermint,” Garner starred as a mother out for revenge after her family was killed. To celebrate the release of the movie, Garner also showed up to a screening of “Peppermint,” bought tickets for herself, and eavesdropped to hear reactions from fans.

During an appearance on “The Ellen DeGeneres Show,” the actress said that she wasn’t really thinking” and didn’t “have a plan for this.” So she ended up hiding behind a curtain, “in the corner like a grown-up.” 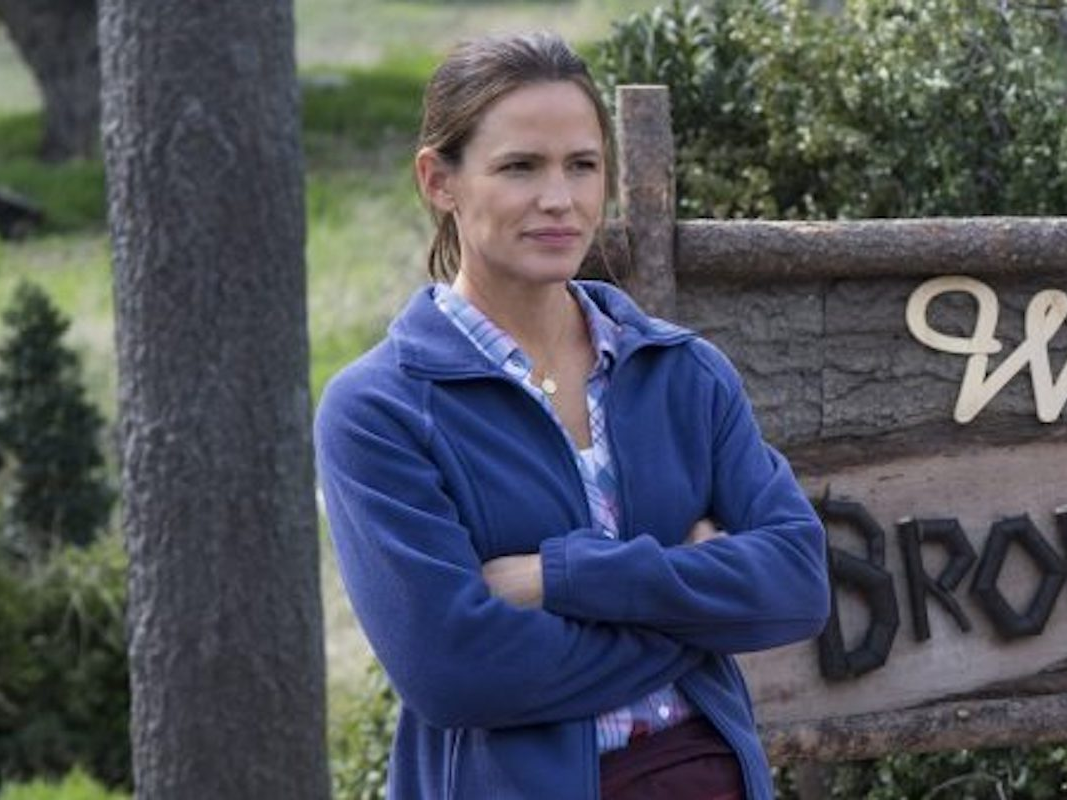 The show was cocreated by “Girls” star Lena Dunham and Garner played Kathryn McSorley-Jodell. The role was challenging for Garner, who’s considered America’s sweetheart and had to play a character that was brash and bragged about her 11,000 followers online.

Speaking to Entertainment Weekly, the actress explained that Dunham and cocreator Jenni Konner had to remind her not to smile or sugar-coat her scenes.

“That was really hard for me,” she said. “There were many times I walked deep into caricature, and I would ask, ‘Please tell me if this is too much?’ But they would say, ‘Go further.'”

Garner is also the cofounder and chief brand officer of a company called Once Upon a Farm. 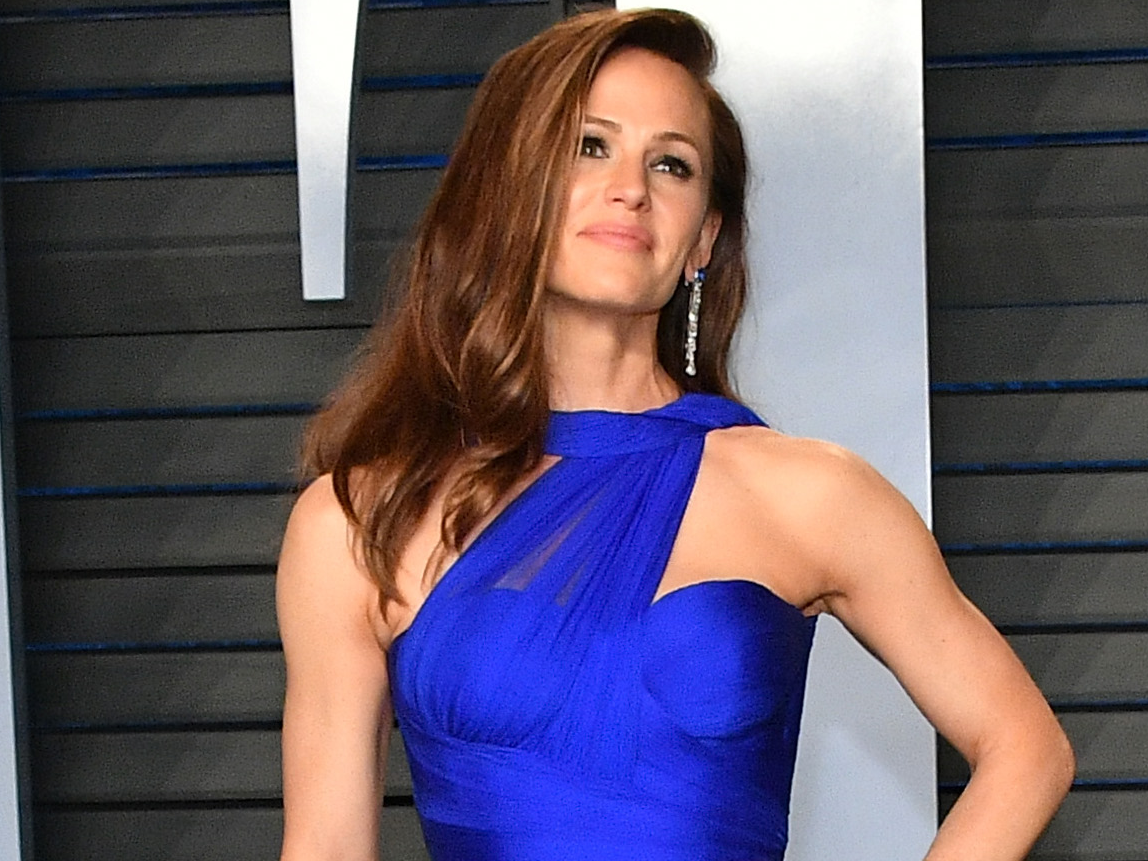 The brand’s child-friendly products are made using organic ingredients, minus fillers and concentrates. Some of the ingredients are also grown on a farm located inLocust Grove, Oklahoma, which is managed by her uncle.

Next, you can catch Garner in an upcoming Netflix movie called “Yes Day.”

caption
Jennifer Garner will star in a movie for Netflix.

The movie is based on a children’s book of the same name, written by Amy Krouse Rosenthal and illustrated by Tom Lichtenheld. “Yes Day” centres on parents, played by Garner and Edgar Ramírez, who try to make it through one day by only saying “yes” to whatever their kids ask.