The 118-year rise and fall of JCPenney, one of America's largest department stores JCPenney has filed for bankruptcy, another sign of the once-venerable brand’s long decline. While coronavirus pressure played a part in JCPenney turning to Chapter 11, it had struggled for years to regain its status as one of the premier shopping destinations for America’s middle class.

JCPenney has shuttered dozens of stores in recent years, including six stores and a Kansas customer service centre that closed at the beginning of 2020. It reported that comparable sales decreased by 7.7% for the fiscal year ending February 1.

Even before coronavirus, competitors like Macy’s and Kohl’s have reported similar sales slumps, JCPenney had been hit particularly hard by nearly a decade of declining foot traffic and a failure to compete with e-commerce juggernauts like Amazon and Walmart.

Gersch said to Business Insider in July 2018: “They are creating an experience that isn’t right for anyone. They are trying to serve too many people at the moment.”

The struggles of the beleaguered brand can be traced to a series of missteps made by an ever-changing executive team with conflicting strategies. While the appointment of CEO Jill Soltau last October signalled an opportunity for a turnaround, JCPenney’s quarterly losses are giving analysts pause.

However, JCPenney wasn’t always so downtrodden. Below, we take a look at JCPenney’s rise as a mainstay of the American mall – and eventual fall – in photos.

JCPenney was founded by James Cash Penney in Kemmerer, Wyoming, in 1902. Penney decided to try his hand at retail after a failed attempt at starting a butcher shop in his home state of Missouri. 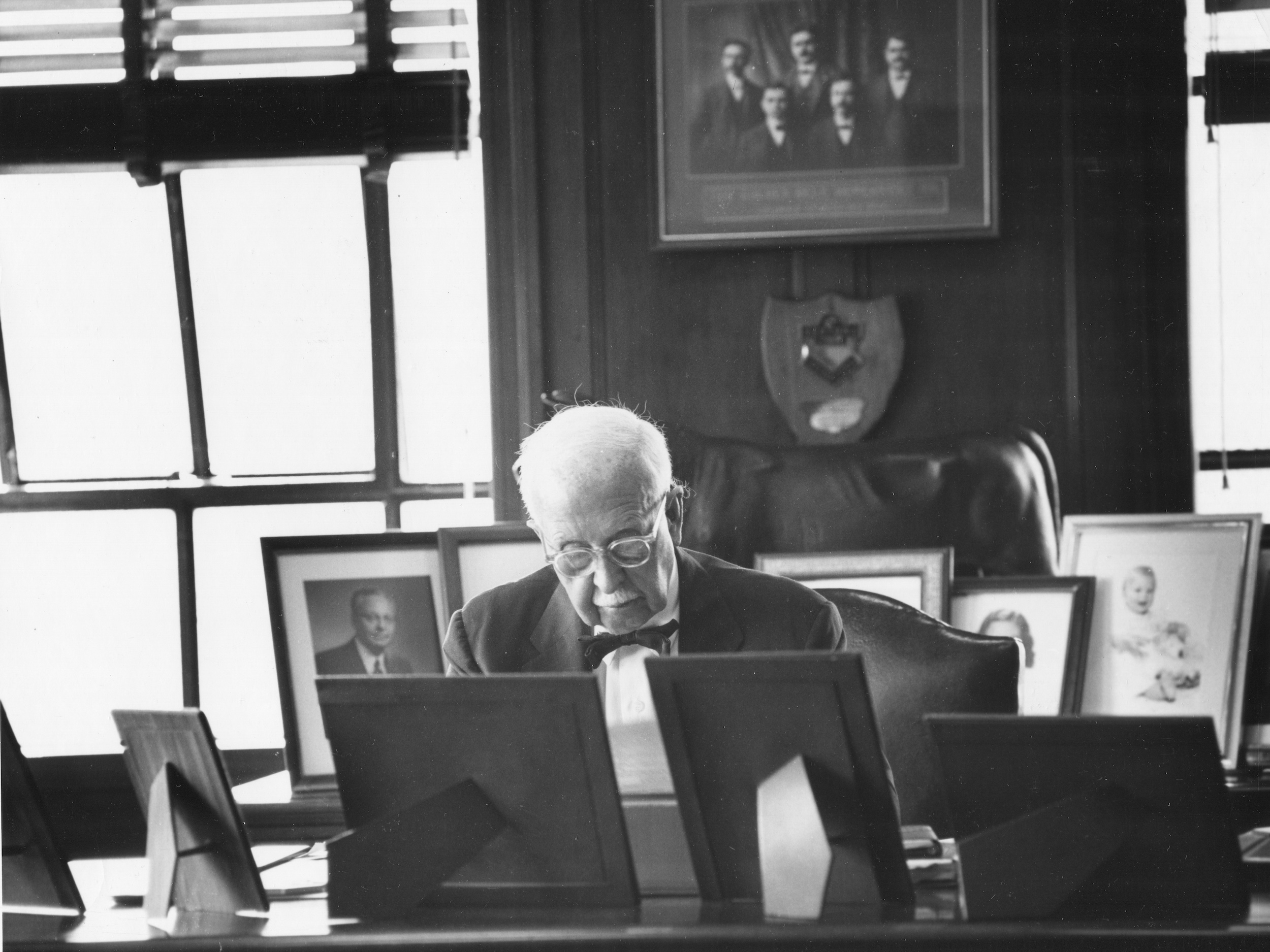 He named the first store “The Golden Rule,” on ode to the popular idiom that means to “treat others as you would like to be treated.” 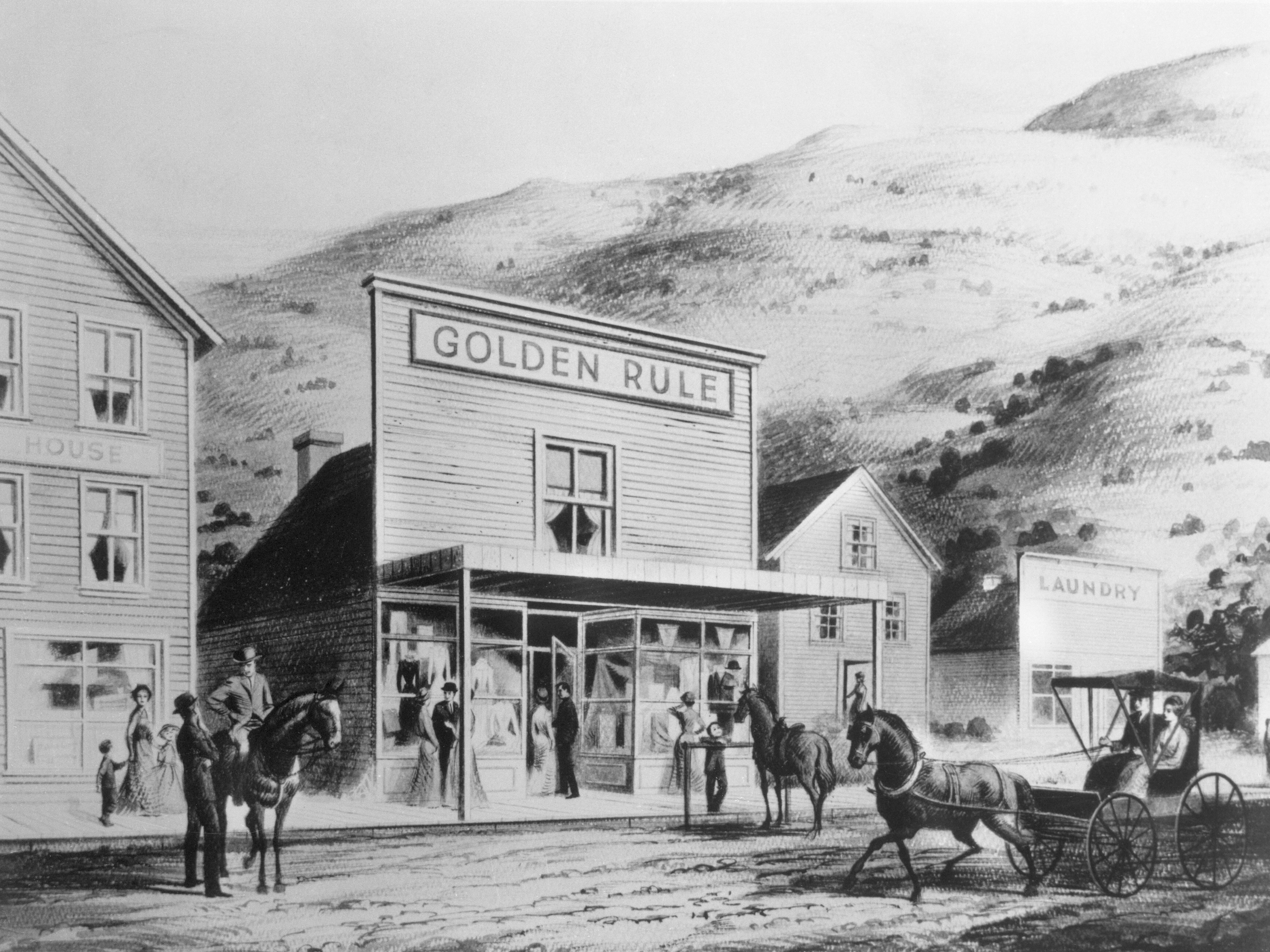 By 1914, The Golden Rule had become a fully incorporated company. It officially changed its name to JCPenney and set up its headquarters in New York City. 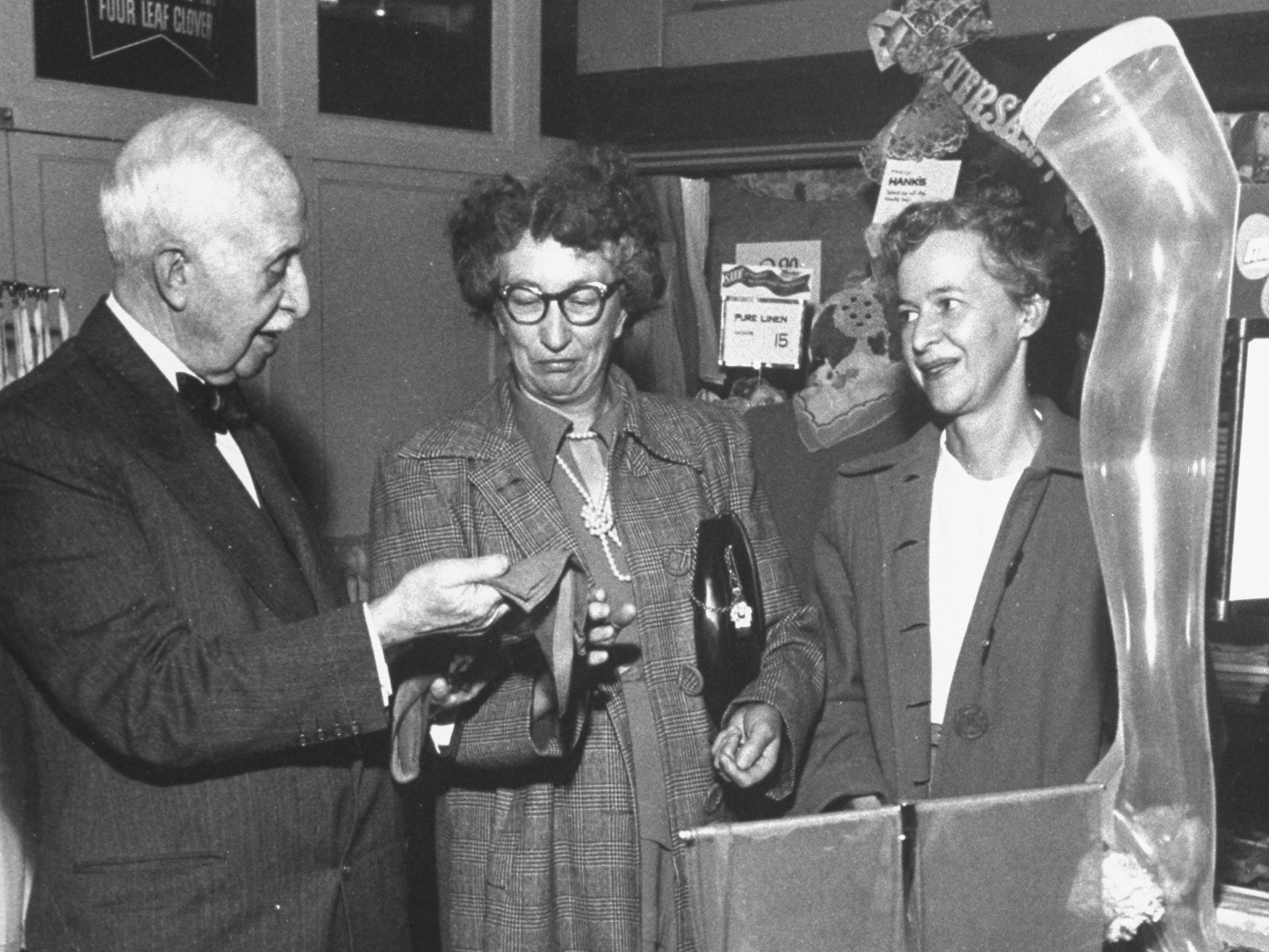 JCPenney became a publicly traded company in 1929, though it had a bit of an inauspicious start. The company was listed on the New York Stock Exchange for the first time a week before the stock market crash that caused The Great Depression. 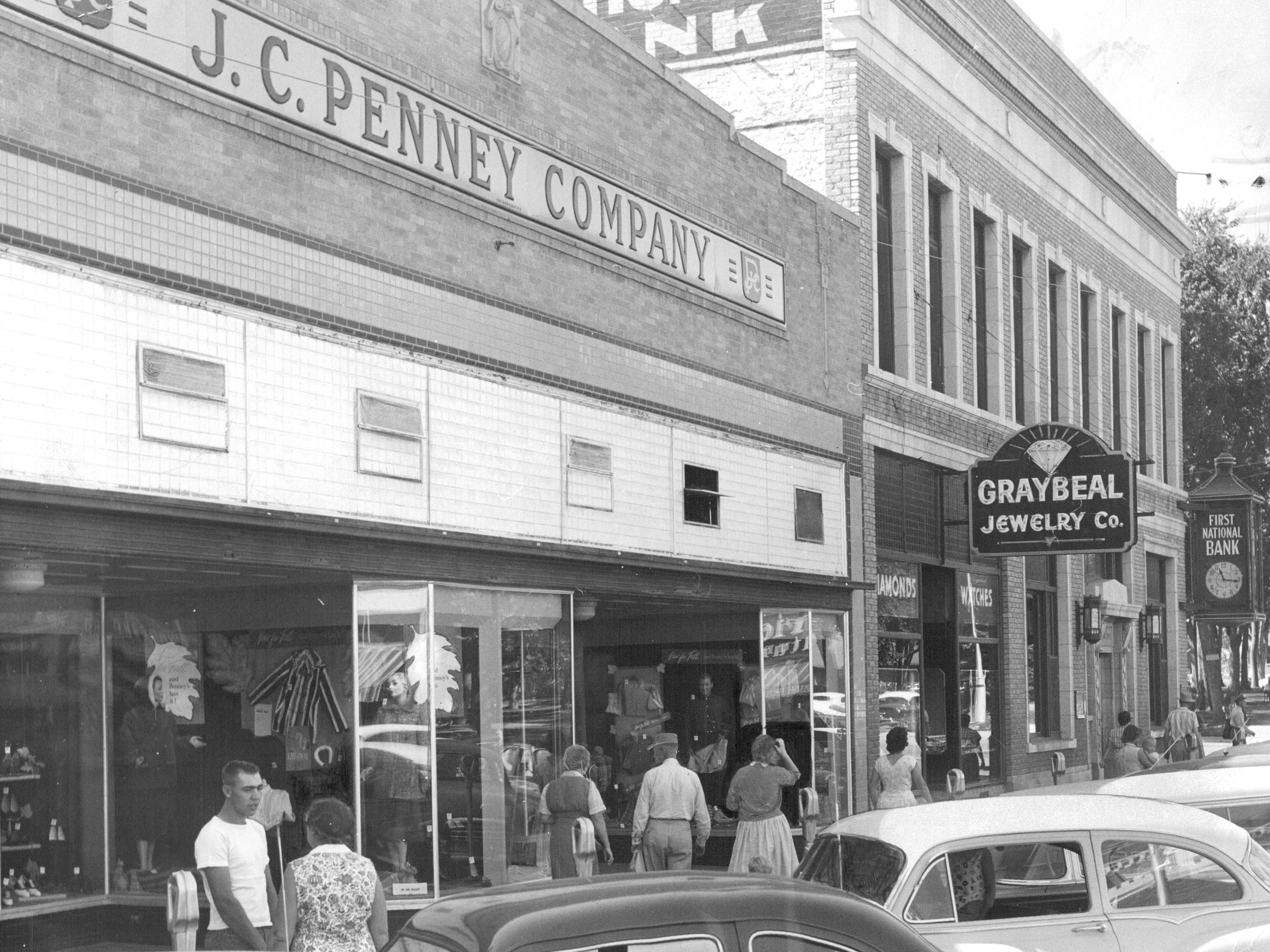 Still, the company managed to reach $US1 billion in sales by 1951. After operating exclusively as a cash-only establishment, it opened up credit sales in 1958. 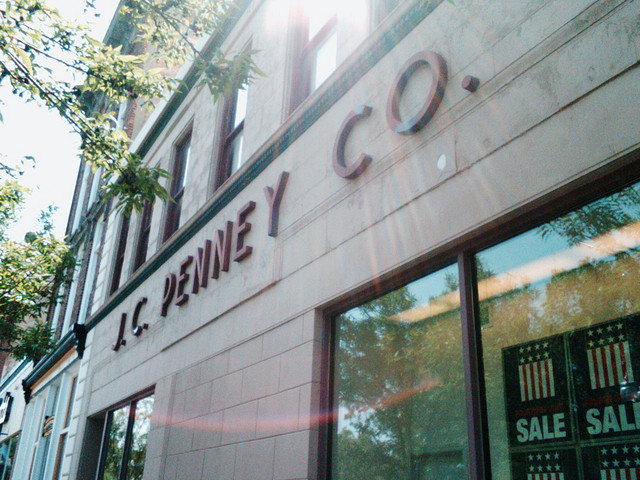 In 1963 JCPenney issued its first catalogue, which would later develop into a sprawling, 1,000-page booklet before it was discontinued in 2009.

Though the catalogue had a brief renaissance in 2015, JCPenney’s catalogue ultimately succumbed fully to the digital age.

With the dawn of the world wide web in full swing, JCPenney became one of the first retailers to launch an e-commerce website in 1994. 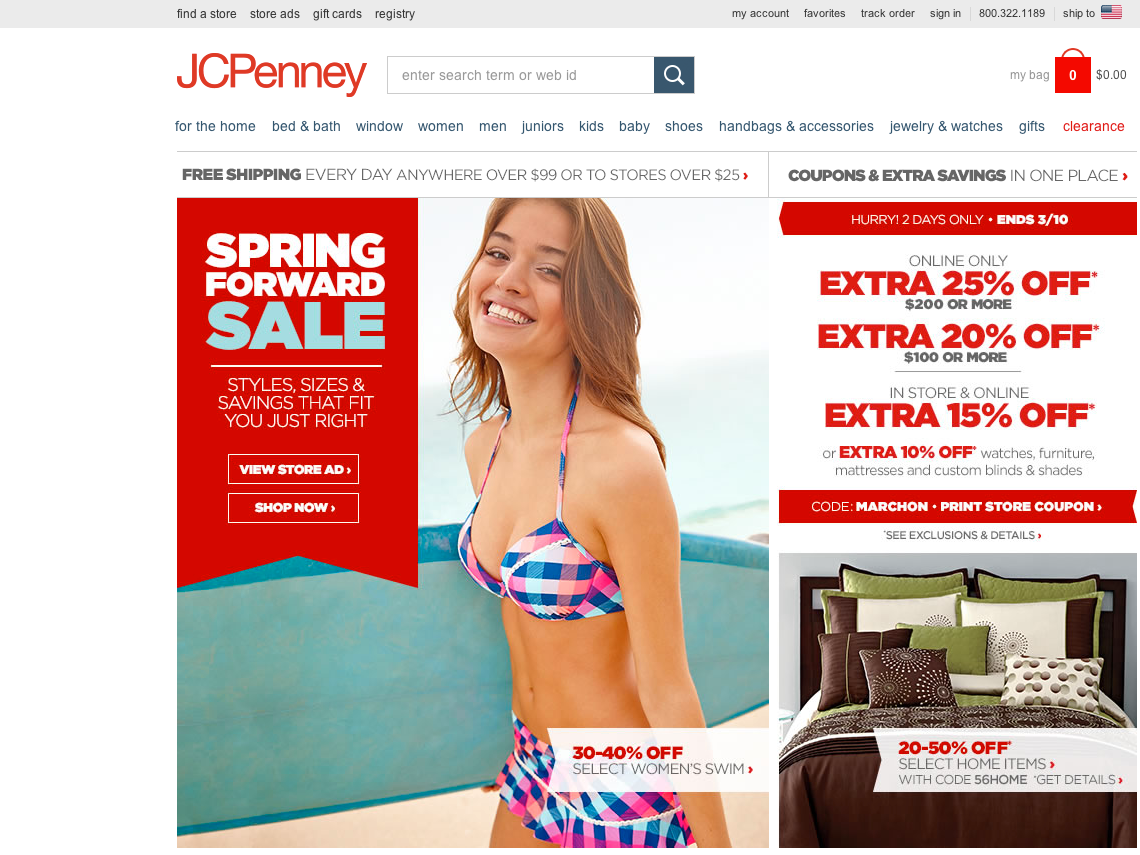 Now fully in the digital era, JCPenney spent the early aughts experimenting with new forms of customer engagement, including rewards and mobile programs. JCPenney teamed with Sephora in 2006 in an attempt to increase foot traffic. Today around 75% of all JCPenney stores include a Sephora. 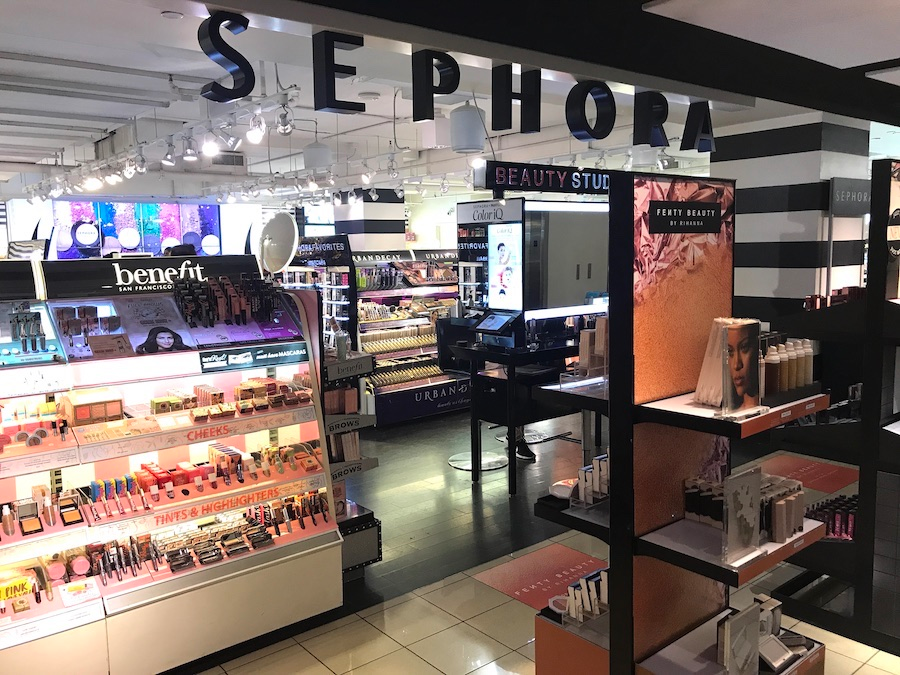 Though JCPenney credits Sephora as a positive addition to the business, analysts have said that the pairing is ultimately hurting the makeup retailer and driving consumers to competitors like Ulta.

Sales began to fall dramatically during the recession and under the leadership of CEO Myron Ullman. By the end of 2010, sales had dropped by 10% from its 2006 high of $US20 billion. Sensing an opportunity, investor Bill Ackman’s real-estate firm Vornado purchased a portion of JCPenney and then swiftly ousted Ullman to replace him with Apple’s Ron Johnson.

Johnson got to work radically altering the business in a series of moves that ultimately and irrevocably alienated JCPenney’s core customer base. In an attempt to appeal to more affluent shoppers, Johnson changed the logo, marketing strategy, pricing model, and brand selection. Most damagingly, he eliminated coupons and discounts. JCPenney continued to falter under Johnson’s tutelage. In 2013, he and the company became embroiled in a high-profile legal battle with Macy’s regarding a contract for selling exclusive Martha Stewart-branded products. By the end of 2013, JCPenney decided to bring Ullman back to reverse some of Johnson’s missteps. However, by this point JCPenney was in too deep. 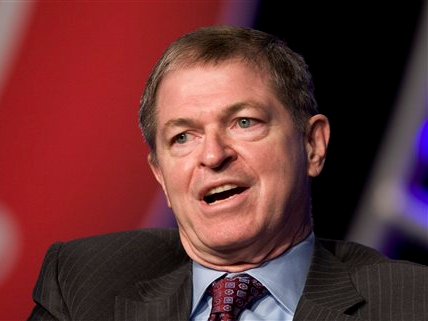 While competitors debuted new digital strategies and store concepts, JCPenney had racked up so much debt there was little left to invest in crucial advancements. Sales continued to decline. 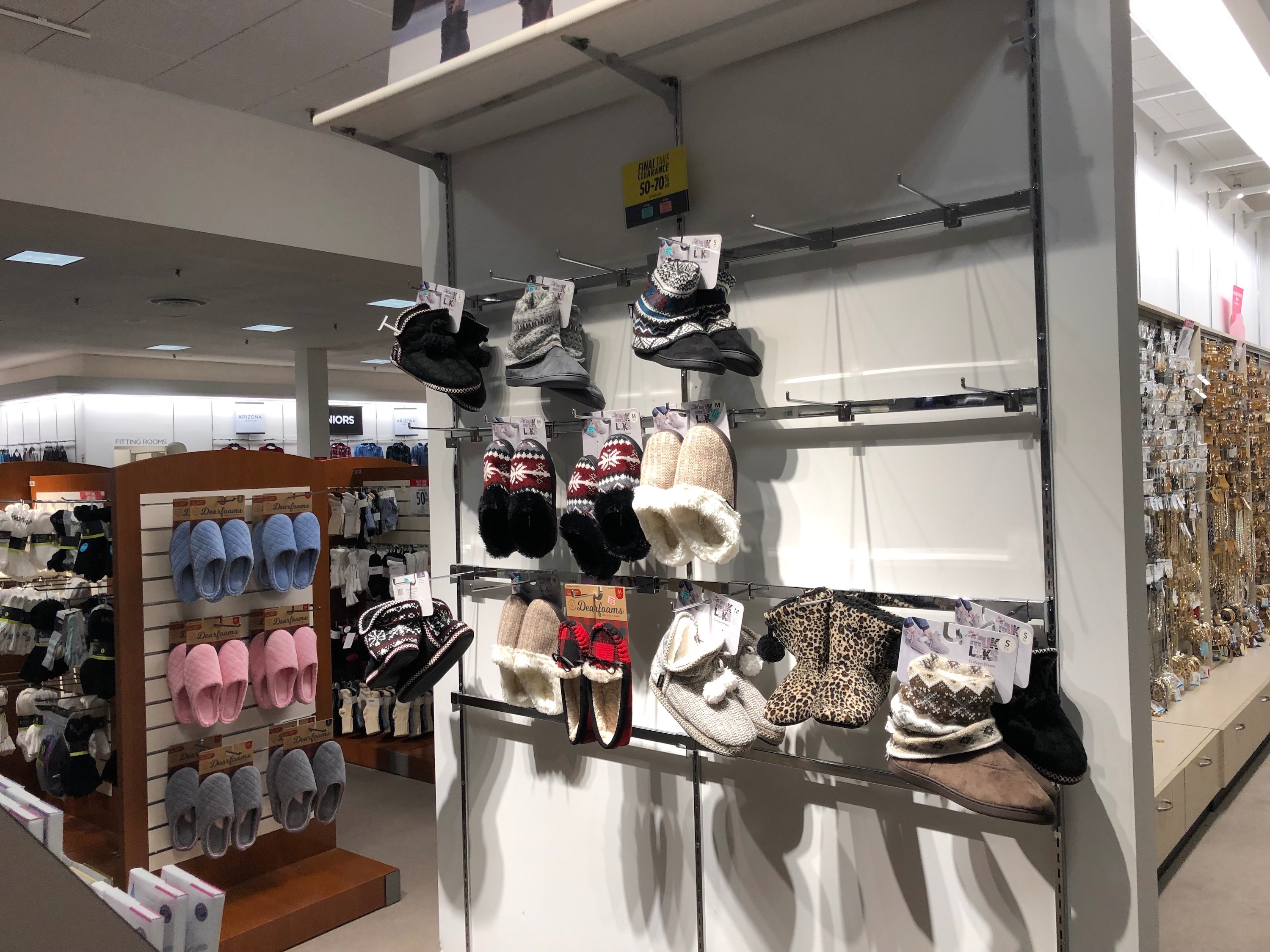 “We are still trying to fully recover from the self-inflicted wounds of the previous strategy,” Ullman said in 2015. 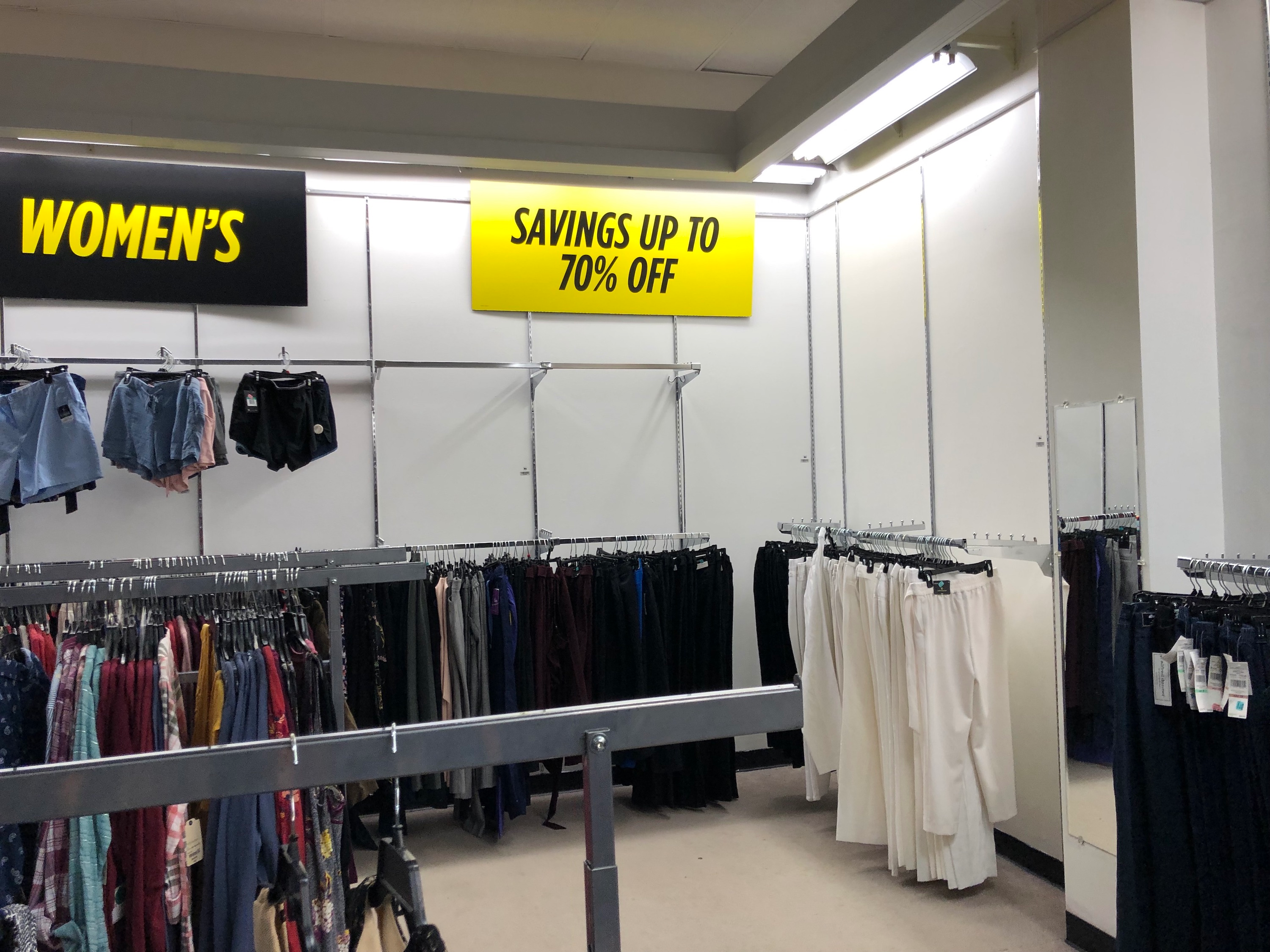 Despite acquiring brands like Liz Claiborne back in 2011, JCPenney no longer had a cohesive vision and identity around its product selection, critics said.

JCPenney tried a few last-ditch attempts at revitalizing. On the heels of Toys R Us’ bankruptcy in 2017, it looked to capitalise by adding toy stores to its retail locations. 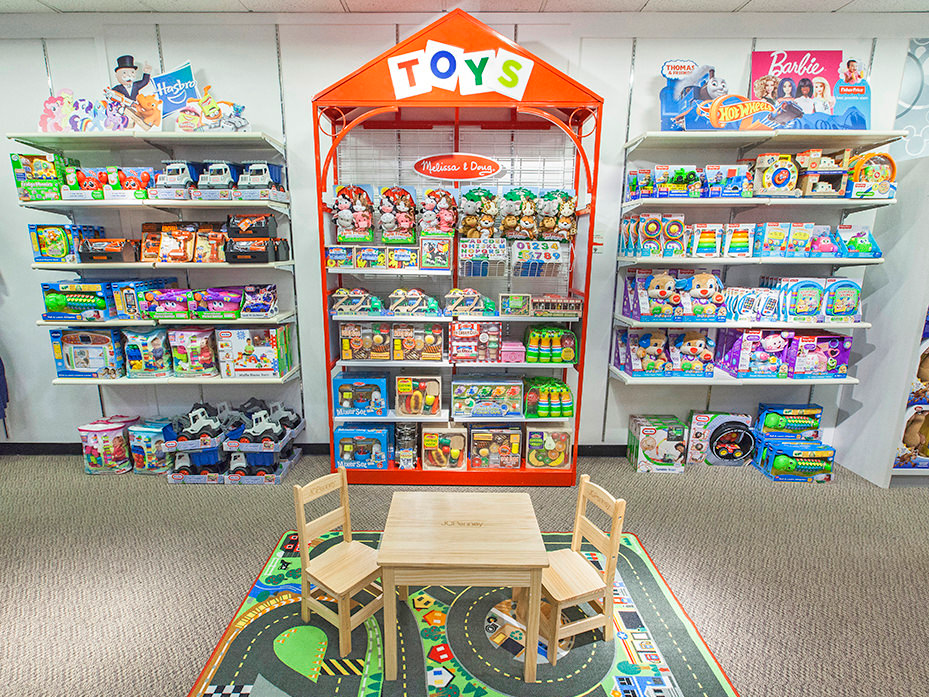 In February 2019, JCPenney announced it would no longer sell appliances. It had reintroduced them for the first time in 33 years back in 2016 in the hopes of drawing in new consumers. 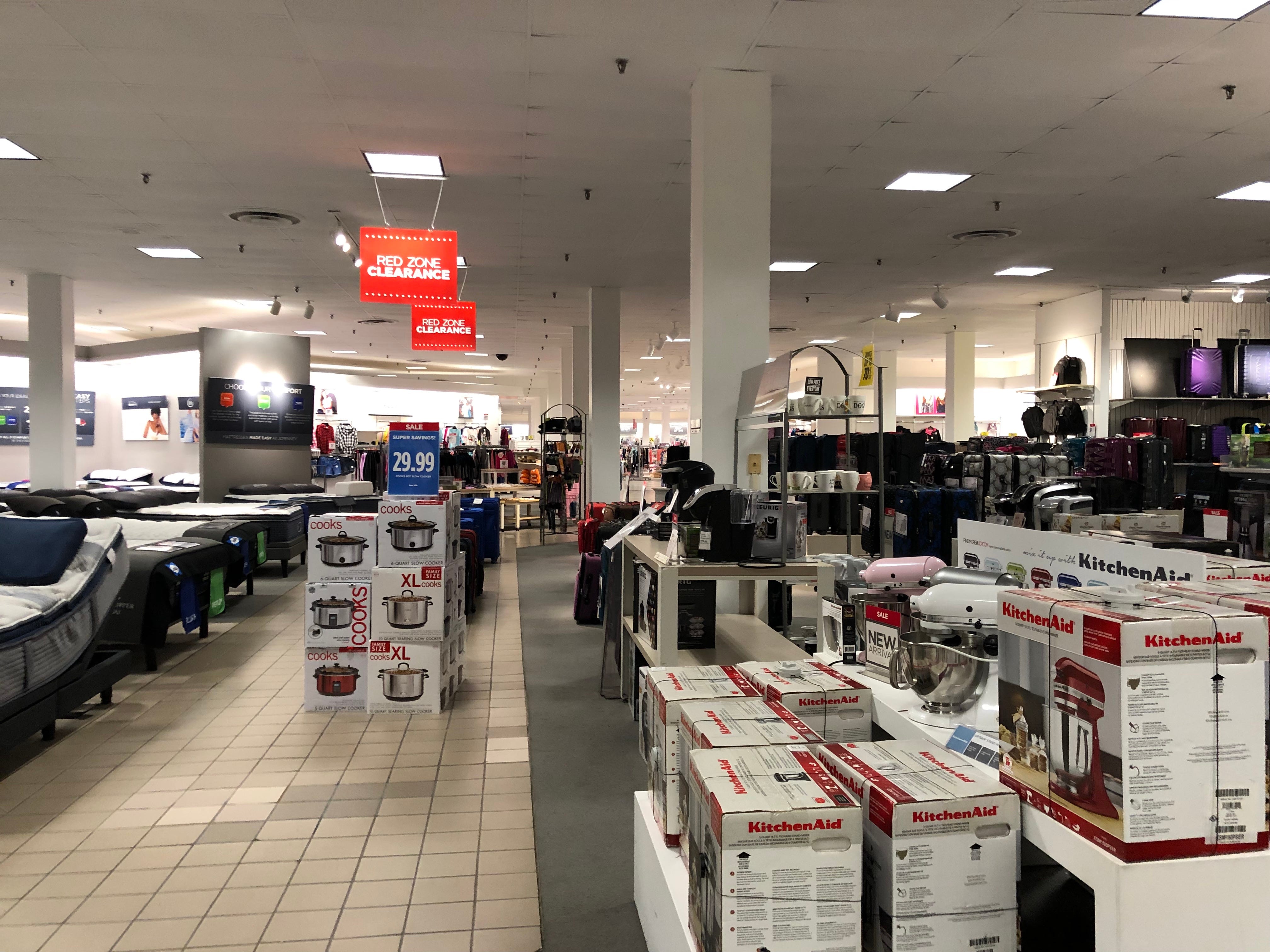 Analysts say it will have to complete a dramatic overhaul that appears increasingly unlikely. 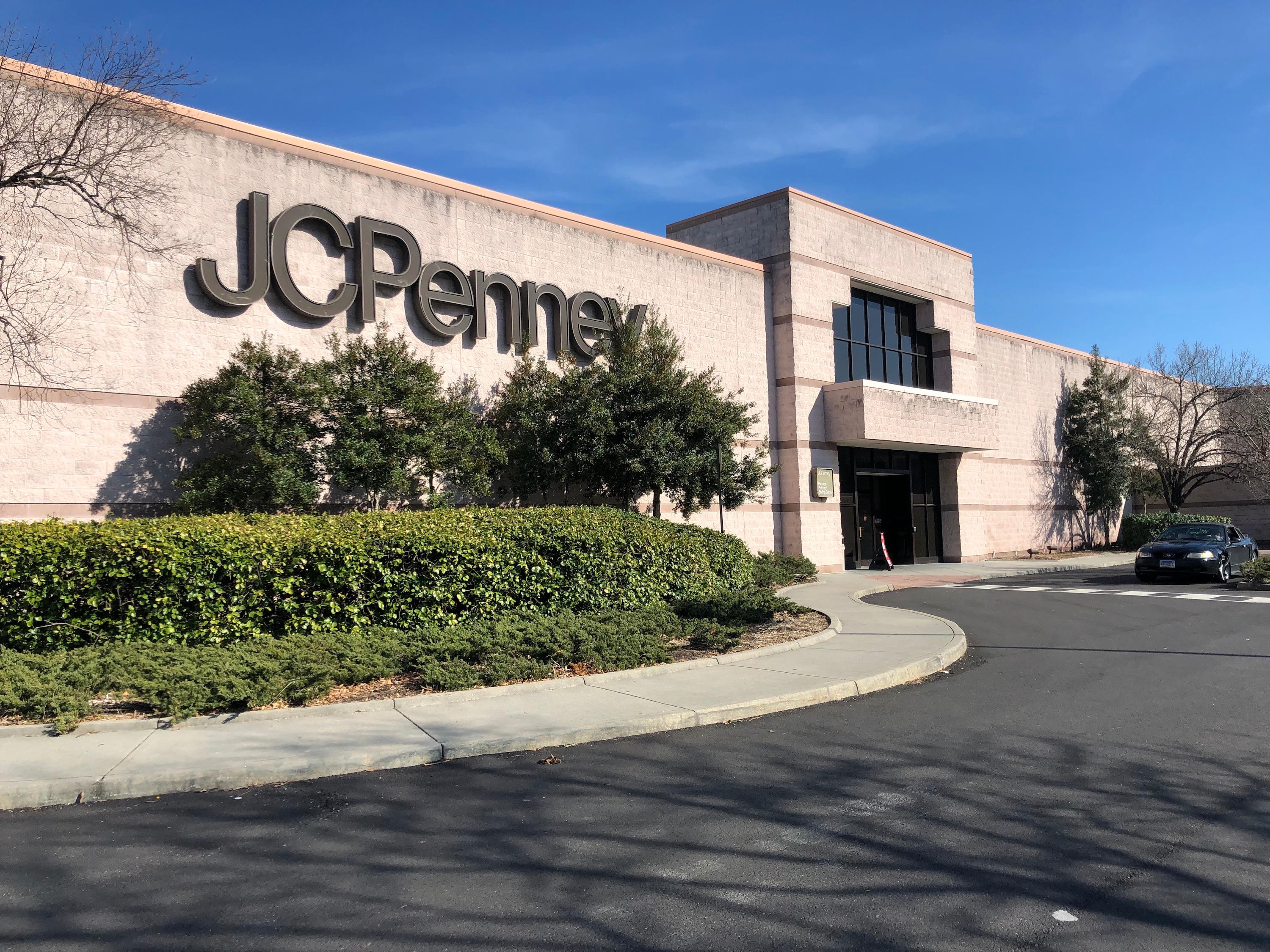 “JCPenney is nowhere,” Mark Cohen, director of retail studies at Columbia Business School, told CNN Business in the summer of 2018. “A retailer who’s nowhere is dead because the business is always hyper-competitive and typically a zero-sum game.”

JCPenny filed for bankruptcy in May 2020, one of the many clothing retailers forced into Chapter 11 by COVID-19. 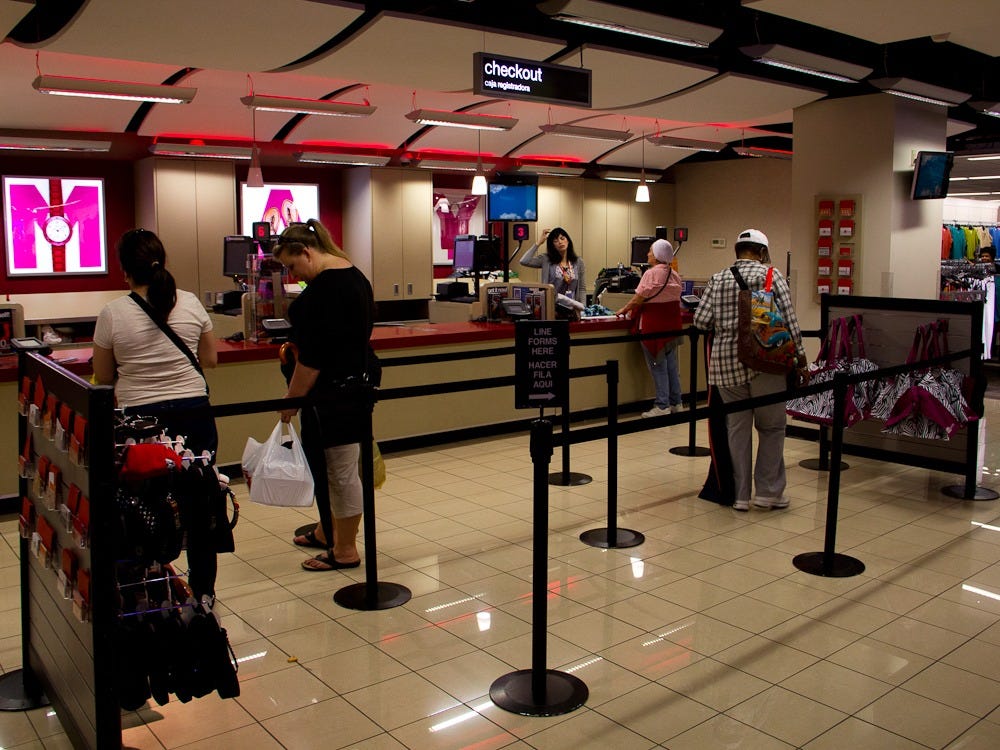