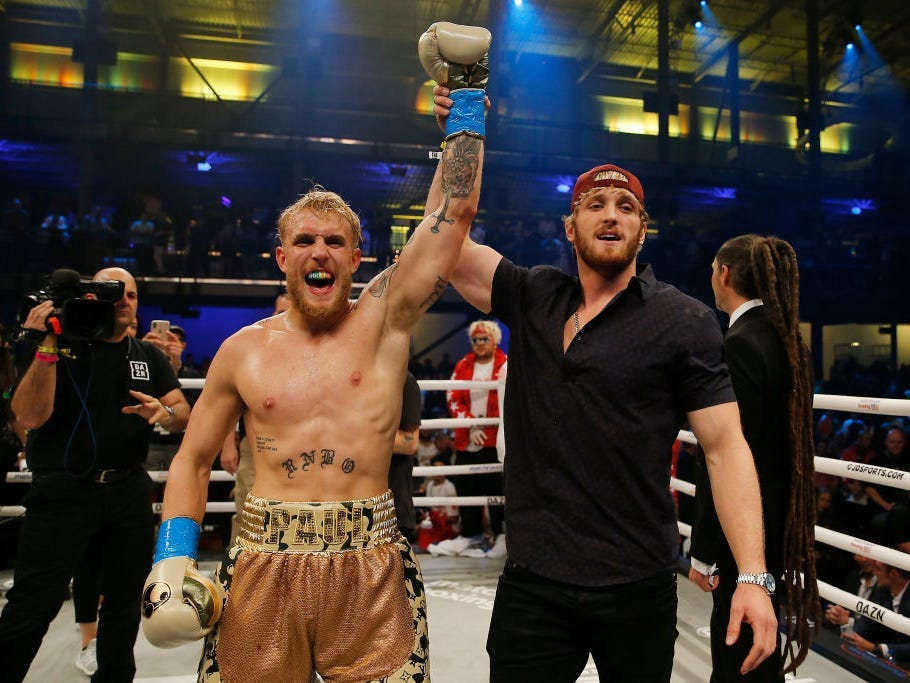 Michael Reaves/Getty ImagesJake Paul celebrates with his brother, Logan, after defeating AnEsonGib in a first round knockout during their fight at Meridian at Island Gardens on January 30, 2020 in Miami, Florida.

Controversial YouTuber-turned-boxer Jake Paul said he agrees with his big brother, Logan Paul, who criticised those who took issue with Harry Styles wearing a dress on the cover of Vogue.

“I just personally wouldn’t wear a dress,” he said. “I think my brother is saying he’ll walk out to his next fight wearing a dress. Maybe my mindset on that might change one day.”

In an episode of Logan Paul’s podcast, “Impaulsive,” released November 17, the elder Paul brother â€” whose YouTube career has also been marked by massive stardom and several controversies â€” criticised his two co-hosts for suggesting that Styles was less “manly” for wearing a dress on the December cover of Vogue. The photoshoot made Styles the magazine’s first cisgender male cover star, and sparked controversy among right-wing pundits like Candace Owens, who criticised the singer’s choice.

“I’m all about challenging social norms,” Logan Paul, 25, said in the podcast interview. “I don’t think there’s much to it. He wanted to try something, and he did it, and it’s f—ing dope.”

Logan Paul questioned what being “manly” means and why Styles wearing a dress would have anything to do with that. “What is manly to you? What does it mean? Is manly being comfortable in your own skin and being comfortable with who you are, regardless of what people think of what you’re wearing?”

The comments drew praise and surprise from listeners, as the creator most infamously filmed a YouTube video showing a dead body in Japan’s “suicide forest” and once said he was “going gay” for a month. “Logan Paul continues to make marginal improvements to his character and I hope that he will continue until he is finally full-fledged Decent Human Being,” said influencer Sarah McGonagall on Twitter.

The younger Paul brother has also been a controversy magnet, recently telling The Daily Beast that he believes the deadly COVID-19 virus to be a “hoax.” Jake has also been criticised for what some saw as homophobic remarks. In 2019, Jake made jokes and speculated about fellow YouTuber and boxer KSI’s sexuality in the run-up to his fight with Logan.