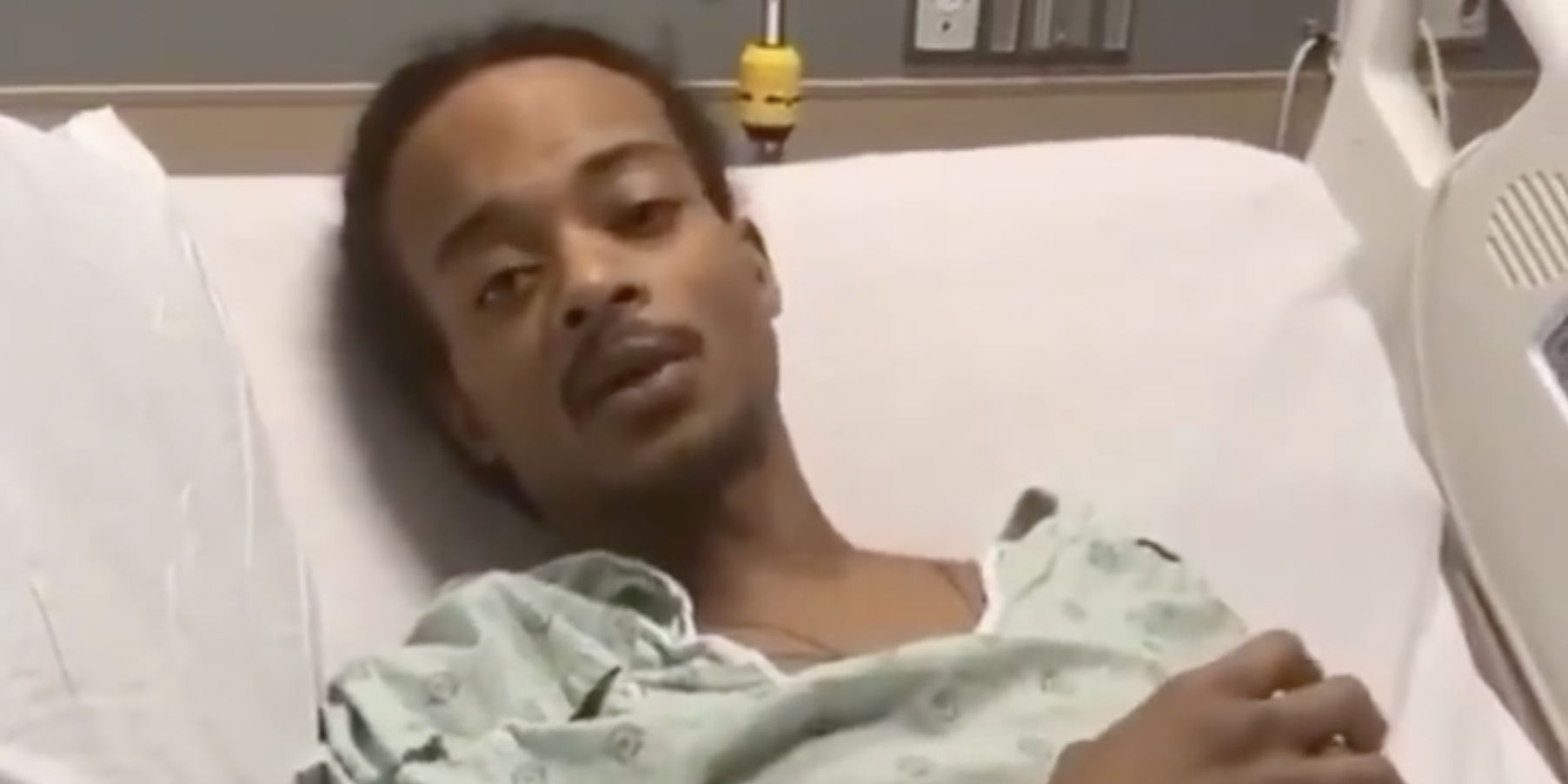 Ben CrumpA screenshot of Jacob Blake in the hospital bed.

Jacob Blake, a Black man who left paralysed after he was shot seven times by a white police officer in Kenosha, Wisconsin, in August says he thought he was going to die in the incident, and even said goodbye to his children.

Blake, 29, spoke to “Good Morning America” co-host Michael Strahan for an interview that aired on Thursday, the first time he’s spoken out since it was announced that no charges would be brought against the officer who shot him.

“And all I remember at that point was kind of leaning back, looking at my boys. I said, ‘Daddy love you, no matter what,’ and I thought it was going to be the last thing I say to them,” he recalled telling his sons. “Thank God it wasn’t.”

Sheskey was responding to a report of a domestic disturbance when the shooting happened.

As officers arrived on scene, they found Blake, who had an outstanding felony warrant on domestic violence offences and sexual assault, was attempting to leave the scene with his children.

Here is my @GMA exclusive interview with Jacob Blake. As Jacob Blake speaks out for the first time. More from our interview tonight on @Nightline. pic.twitter.com/0dZGjSjXG6

What happened next is disputed: Police say officers used a Taser on Blake, who then, with a knife in hand, tried to get into the driver seat of at SUV where his kids were in the backseat. Sheskey then shot Blake seven times claiming Blake had turned toward him in such a way that he would attack him.

Blake, meanwhile, told Strahan that he “didn’t feel like” police were at the scene for him, and started to walk away when police arrived.

As he put one of his sons in the car, he said he felt someone grab his arm.

“Took my arm away and had a human reaction,” Blake said. “After I did that, I realise that it was the police and-it was, like, ‘Uh-oh,’ because when I did that, he slammed me up against the truck.”

Blake said police officers didn’t tell him why they were there or tell him about the warrant, and after the altercation involving the Taser, he walked away from officers.

“I’m rattled, you know?” Blake said. “I realised I had dropped my knife, had a little pocket knife. So I picked it up after I got off of him because they Tased me and I fell on top of him.”

He said he “wasn’t thinking clearly,” and that he shouldn’t have picked up his knife, but in the moment he decided to put the knife in the car, and had planned to “throw myself to the ground and, you know, put my arms behind my back because if they did it there, and they killed me there, everybody will see it.”

Video shows that when Blake opened his car door, Sheskey grabbed Blake’s shirt and fired his gun at his back.

Blake was left paralysed and has had multiple surgeries since the shooting.

Brendan Matthews, an attorney for Sheskey, disputed Blake’s claim that officers did not tell him why they were trying to detain him.

“If Blake simply would have let Officer Sheskey take him into custody without resisting, we would not be having this discussion today, and Blake would not be in the condition he currently finds himself,” Matthews said. “That is all on him and him alone. The officers were compelled to use force once Blake began actively resisting their verbal commands. Again, that is on Blake, not the officers.”

He also said officers “acted according to their training” when encountering Blake.

“The force they used was commensurate to the force they encountered. Race had absolutely nothing to do with the officers’ actions. Blake â€” not race â€” dictated the officers’ actions,” Matthews said. “Blake’s continued inability to understand that is troubling on multiple levels. Jacob Blake, and Jacob Blake alone is responsible for what took place on August 23, 2020. He was given every opportunity to comply with the officers and he repeatedly chose not to.”

“If you’re a Black person in America and you’re not perfect, then they say, ‘Oh it was justified.’ It’s like our children have to be angels,” he said.

Crump did not immediately respond to Insider’s request for further comment.

Rittenhouse has been criminally charged with homicide and his lawyers say he acted in self-defence.